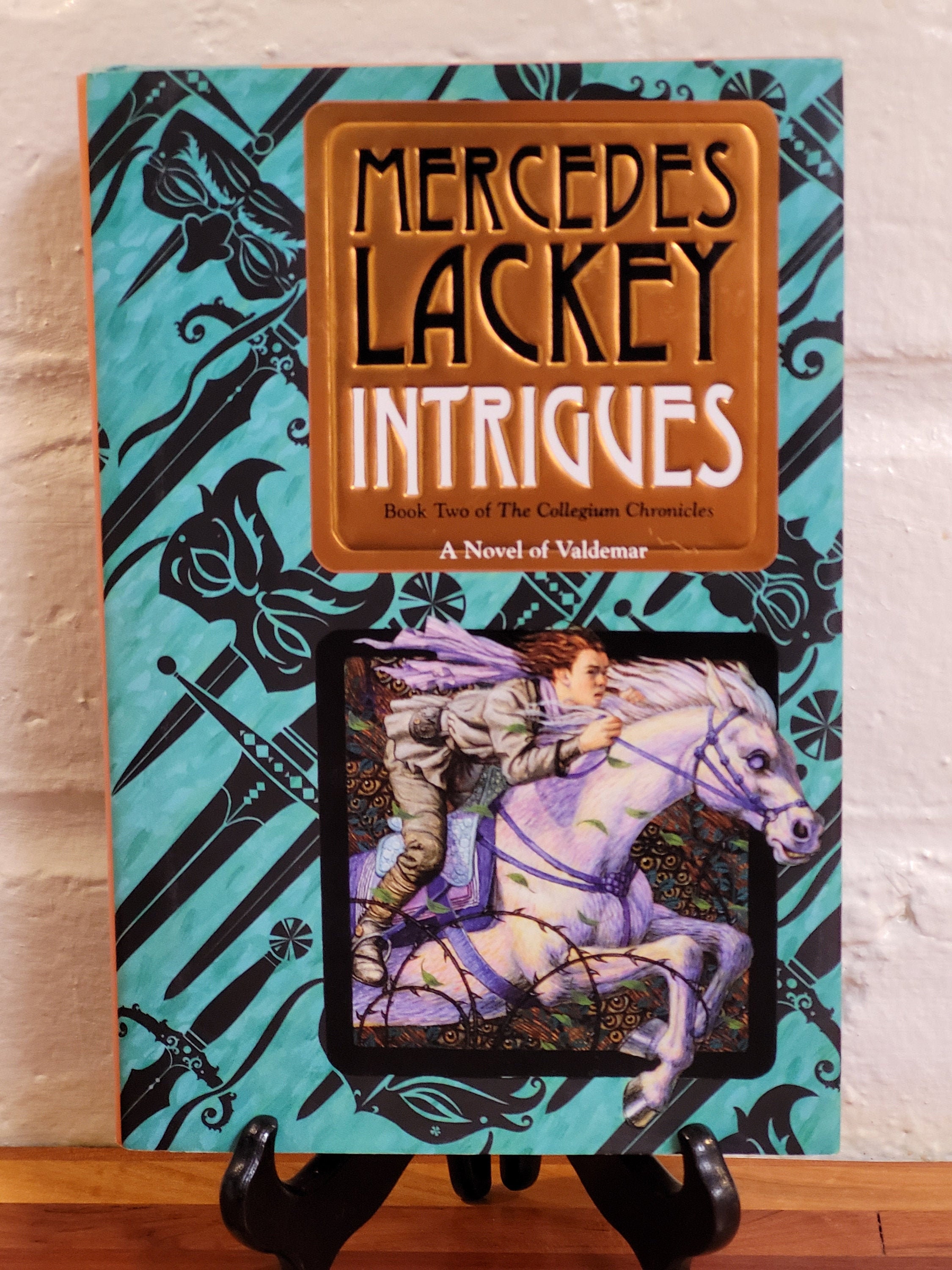 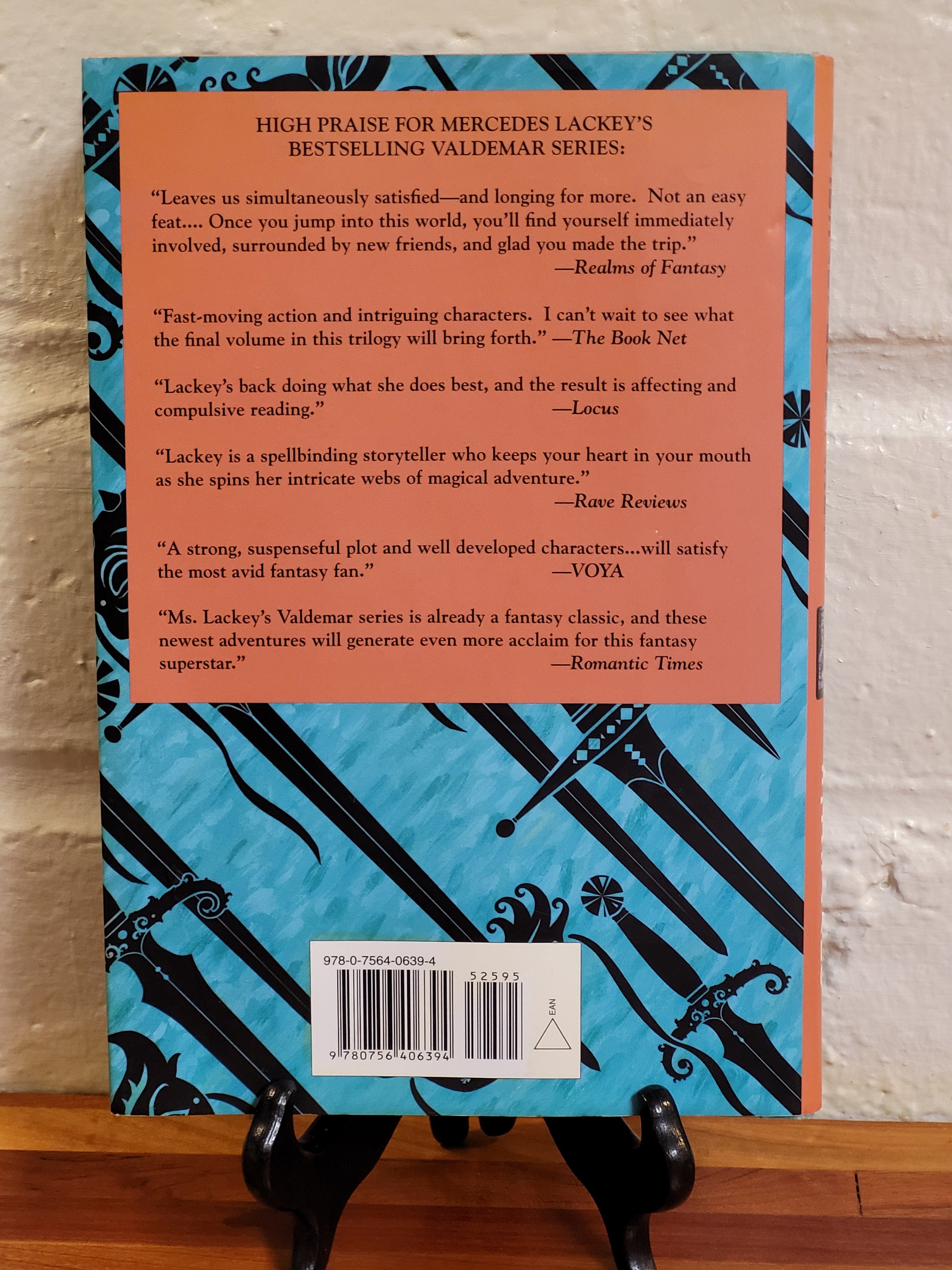 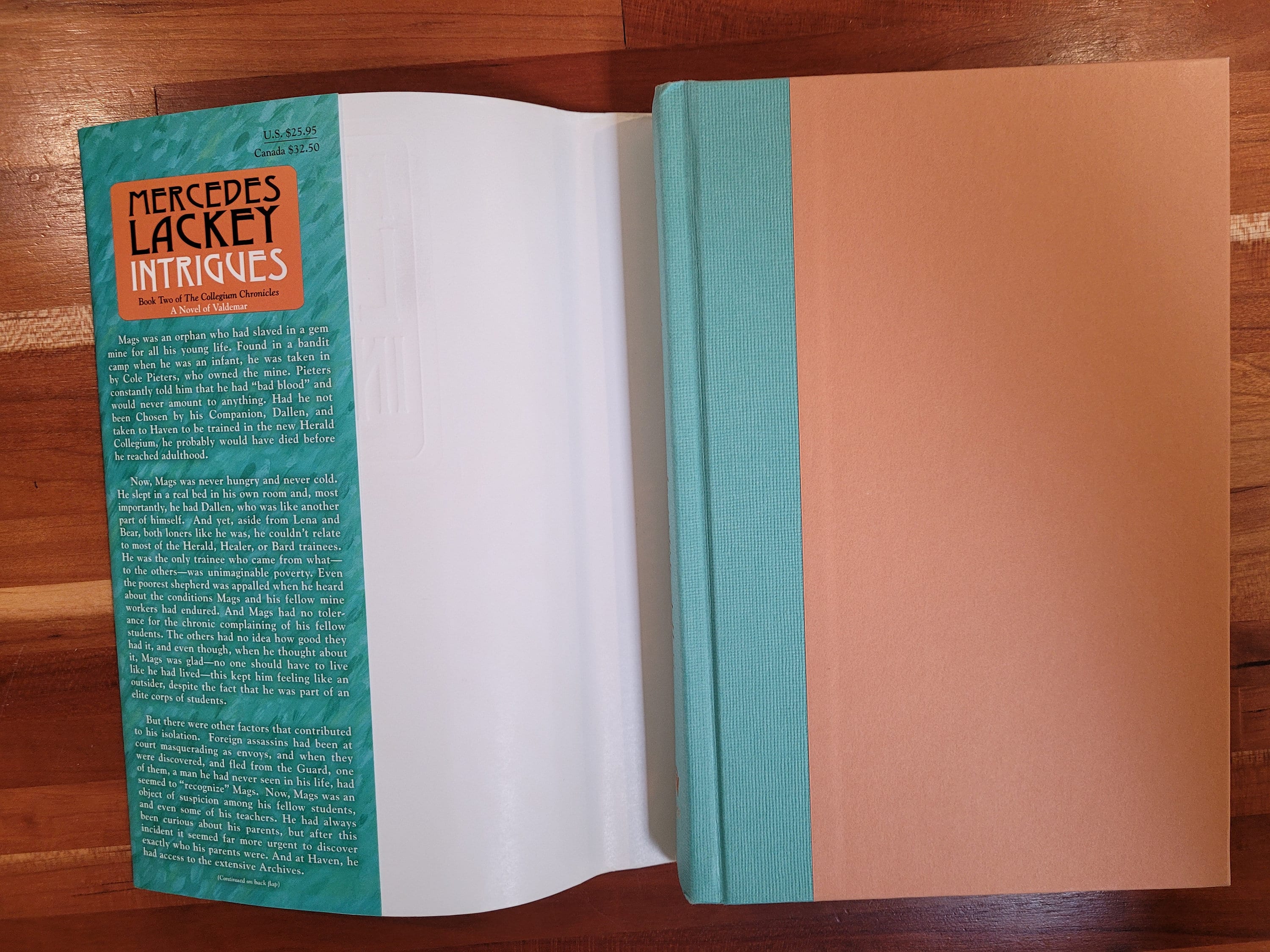 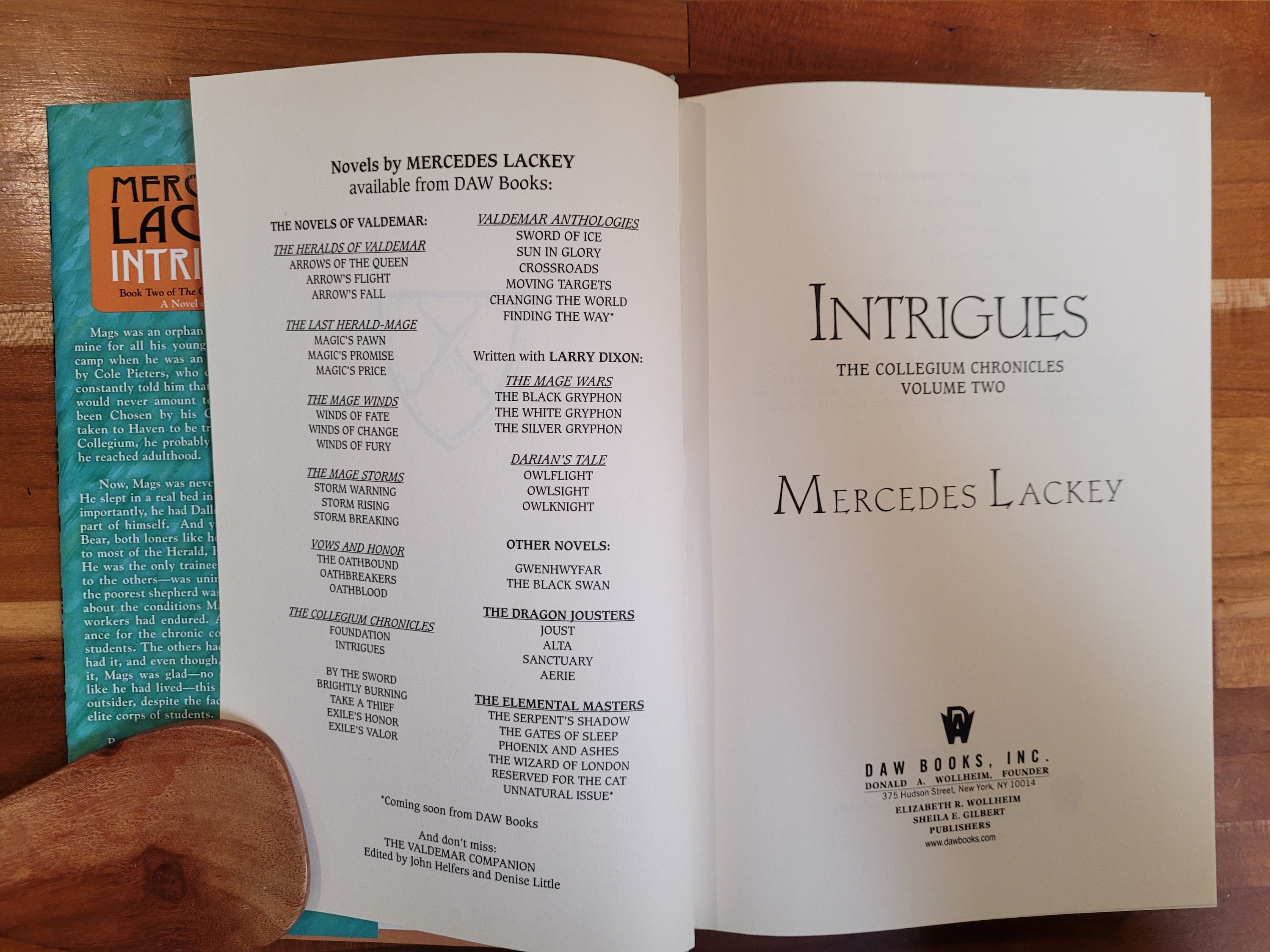 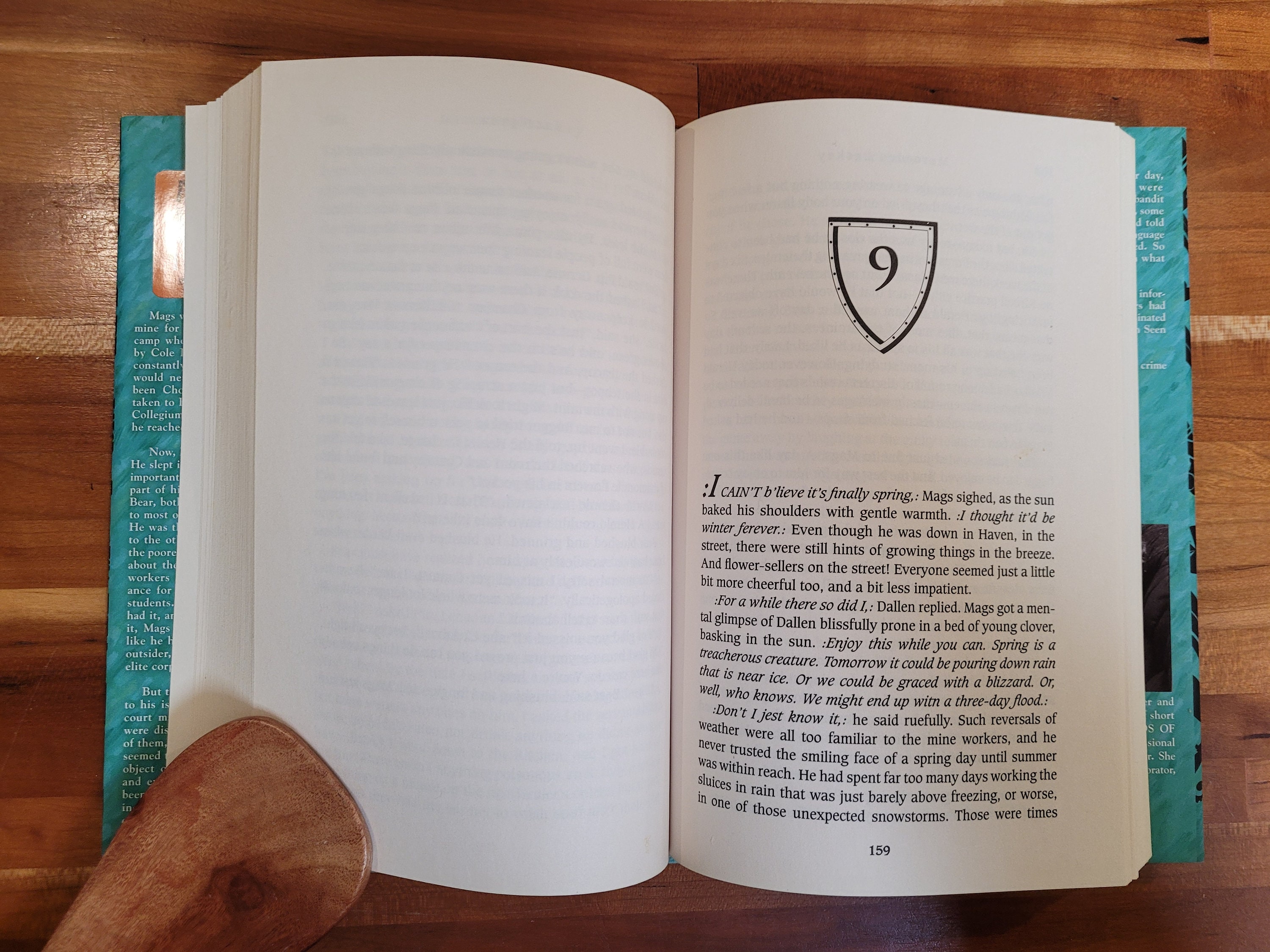 2010 first edition of Intrigues, Vol II of The Collegium Chronicles, A Novel of Valdemar by Mercedes Lackey.

"Mags slapped the palm of his hand against the blue-painted wood of the stable door, and it banged open, whacking into the frame as Mags hurried through it. The noise echoed through the stable, startling the Companions that were huddled together in the aisle nearest the door into backing up a pace or two. Brick walls didn't do much to deaden sound. The chill wind that followed him through chased down his neck as the last icy grasp of winter clawed at him. ...

"Mags pushed the door closed, leaning into it as the wind whistled around the edges, before the spring latch dropped into place with a snick. He took a long deep breath of the comforting smell of the Companions' stable; clean straw, clean "horse," a hint of damp wool, another hint of woodsmoke. If "home" had a scent, this was it."

"Mags was an orphan who had slaved in a gem mine for all his young life. Found in a bandit camp when he was an infant, he was taken in by Cole Pieters, who owned the mine. Pieters constantly told him that he had "bad blood" and would never amount to anything. If he not been Chosen by his Companion, Dallen, and taken to Haven to be trained in the new Herald Collegium, he probably would have died before he reached adulthood."

Events at the school lead Mags to discover that he may be the subject of a vision of "one of foreign blood" assassinating the king. The Foreseers had even seen blood on his hands. How will he defend himself against a crime he hasn't committed, yet?

Mercedes Lackey (1950 - ) is a fantasy writer and author of over 170 works, including the Valdemar universe, Elves on the Road, Heirs of Alexandria, Secret World Chronicle, Halfblood Chronicles, Elemental Masters, Tales of the Five Hundred Kingdoms, Free Bards, Dragon Jousters, Obsidian universe, and many short stories.