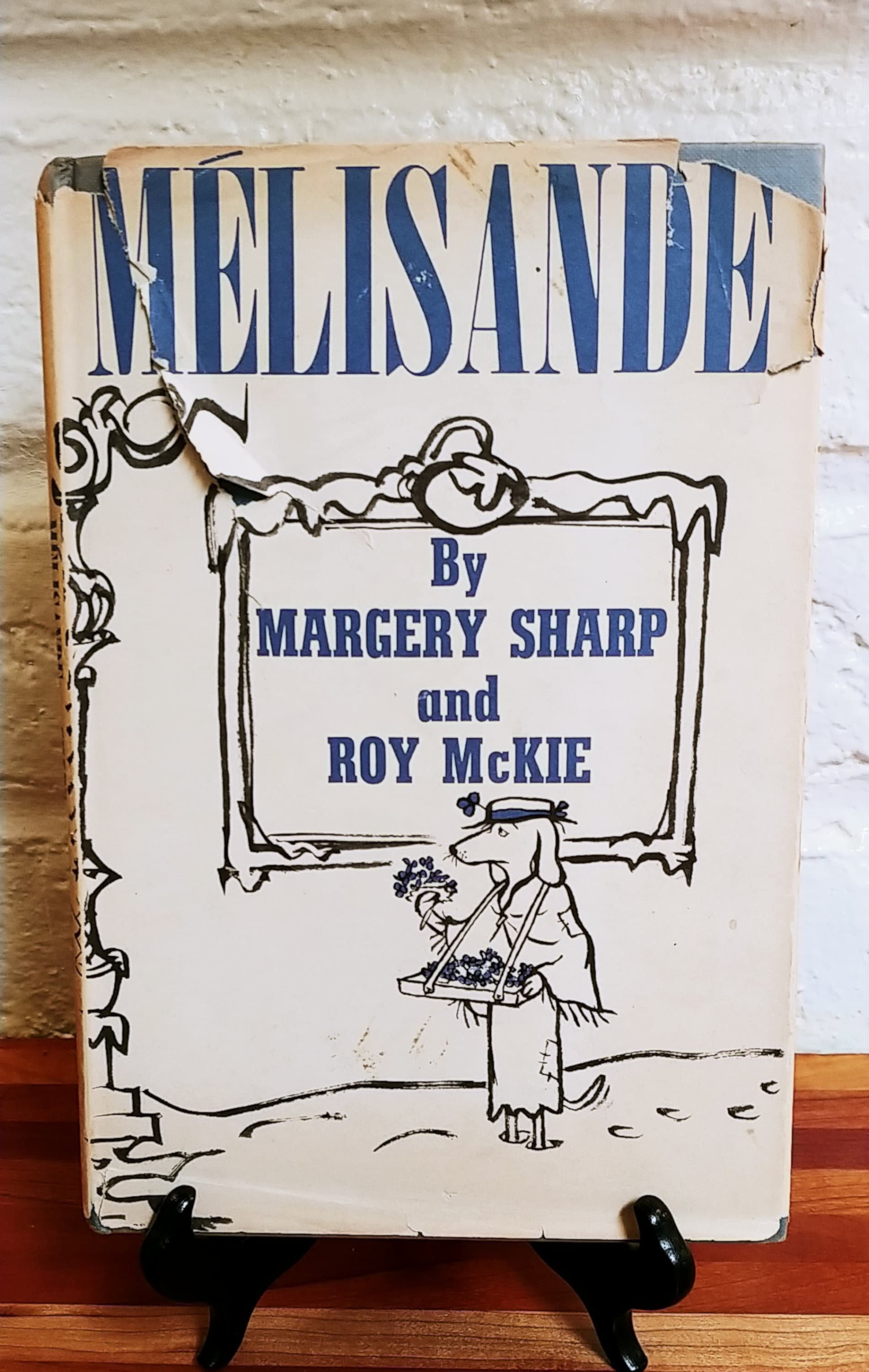 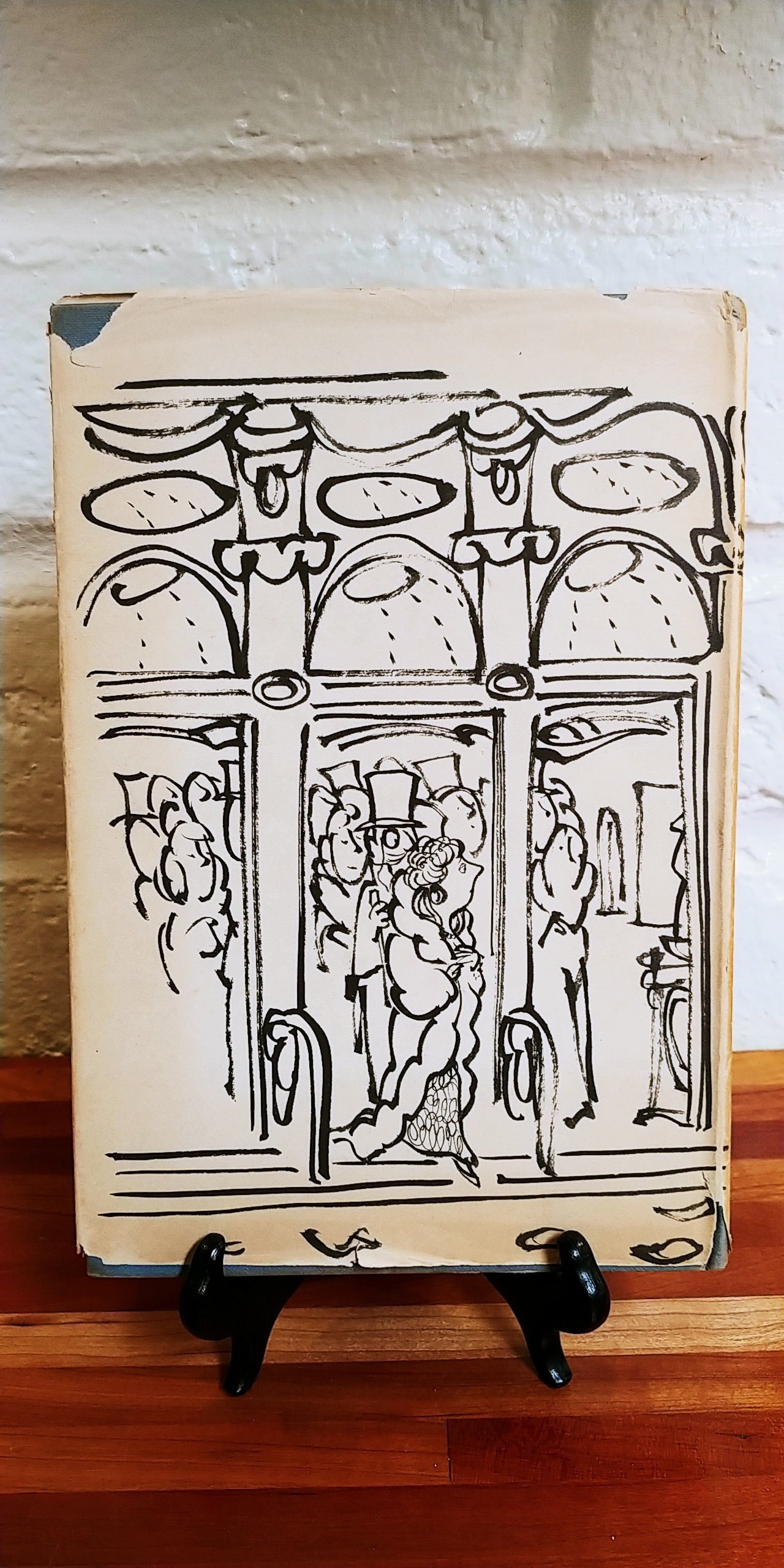 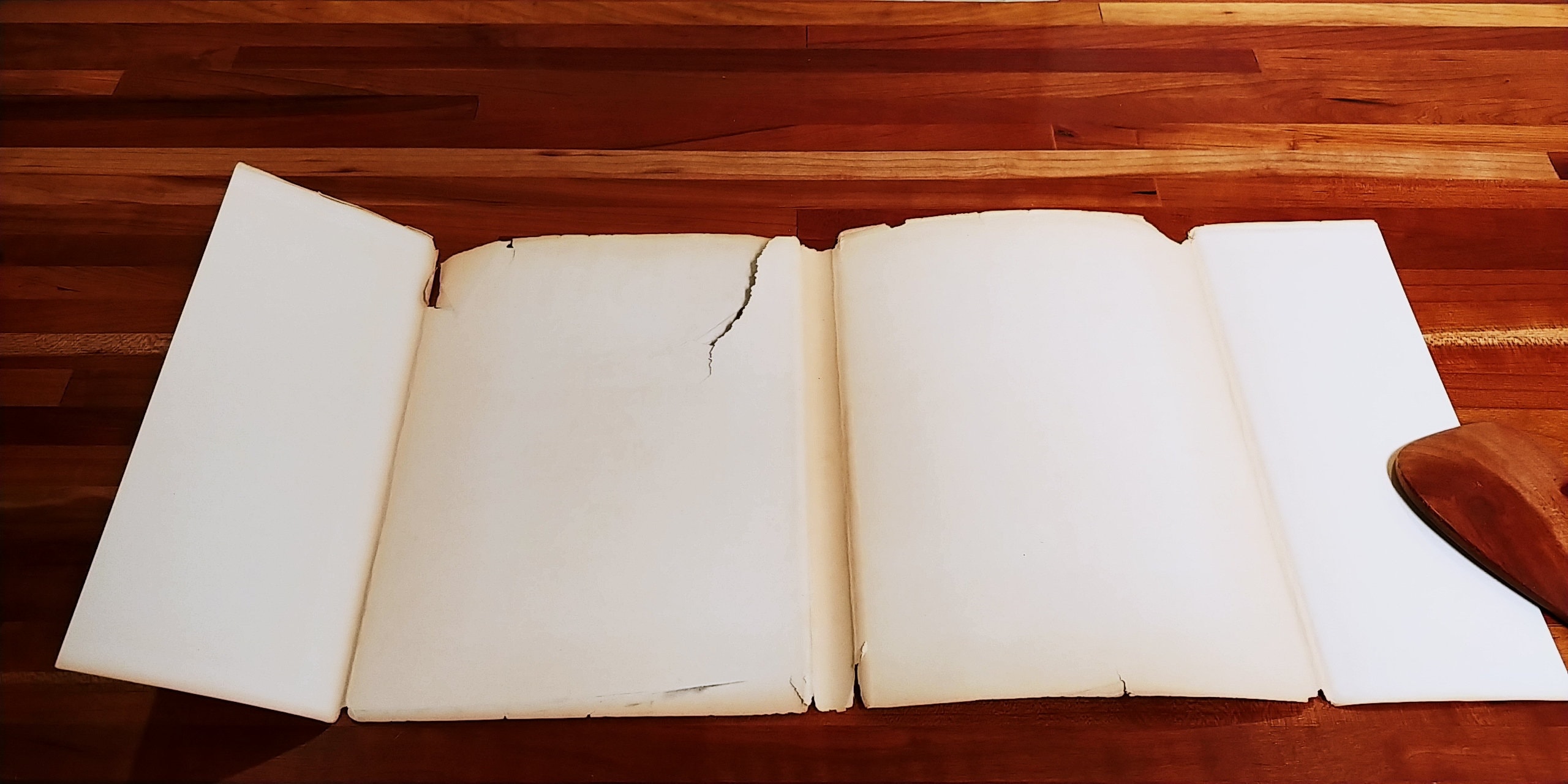 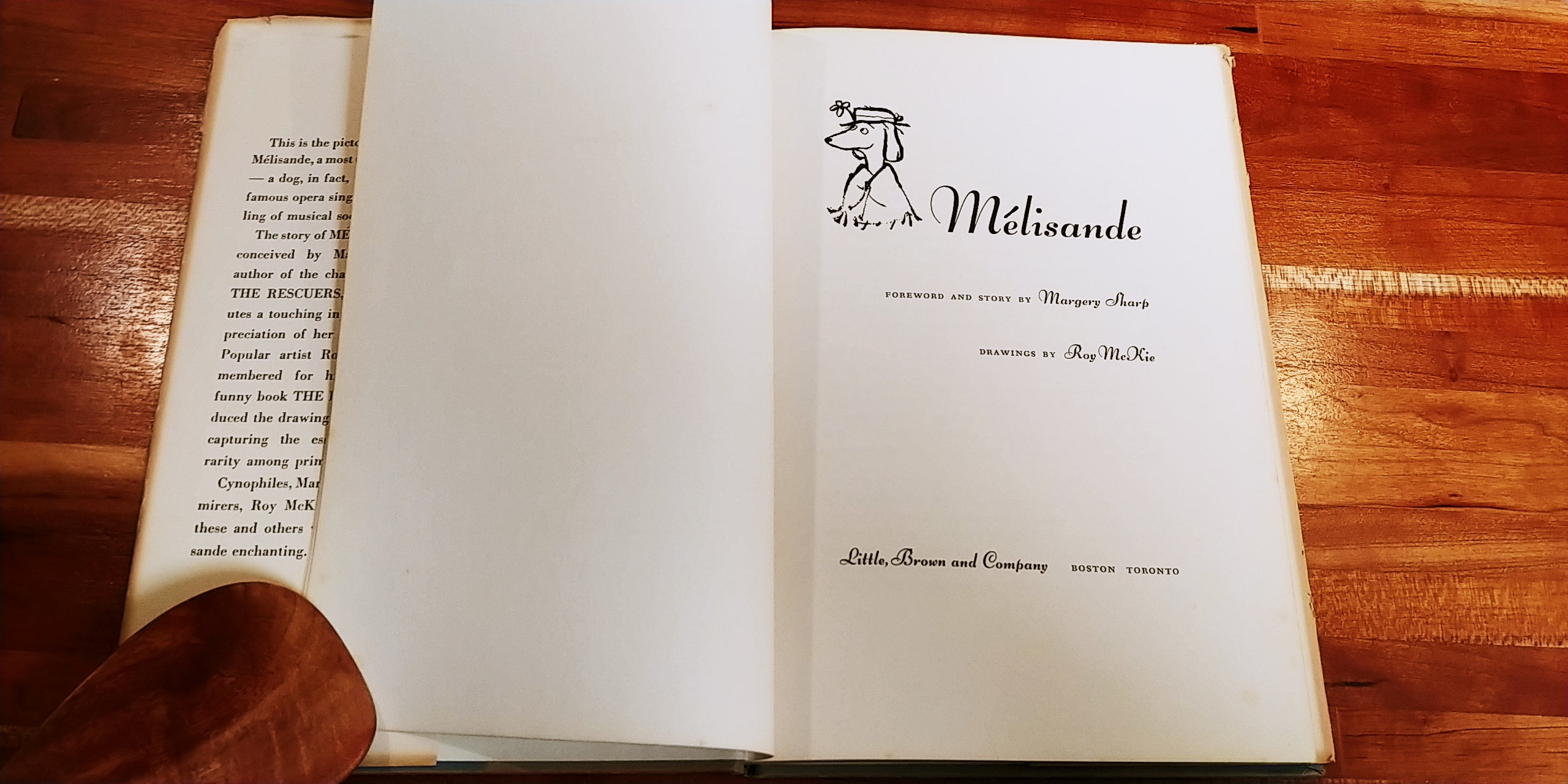 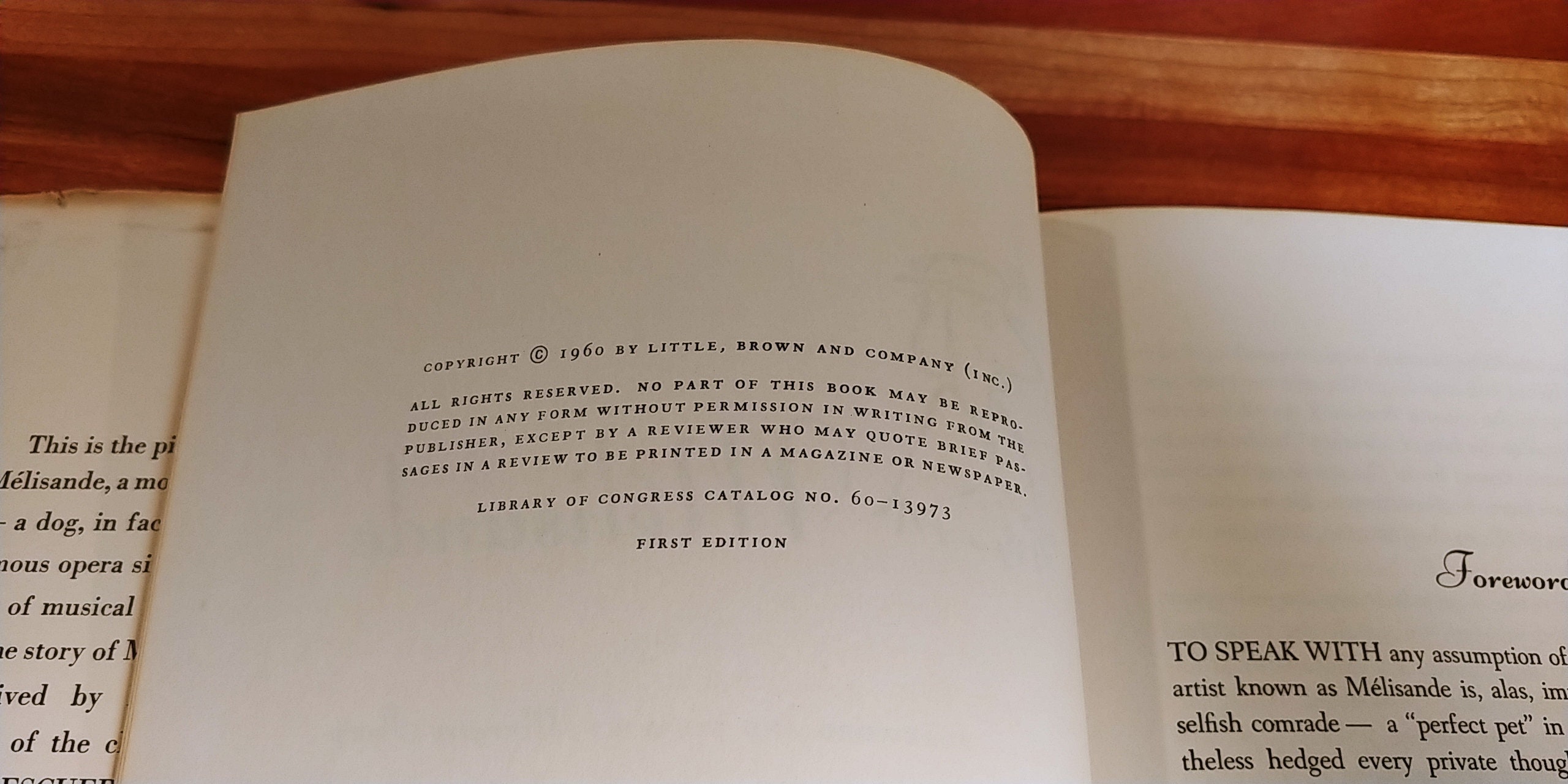 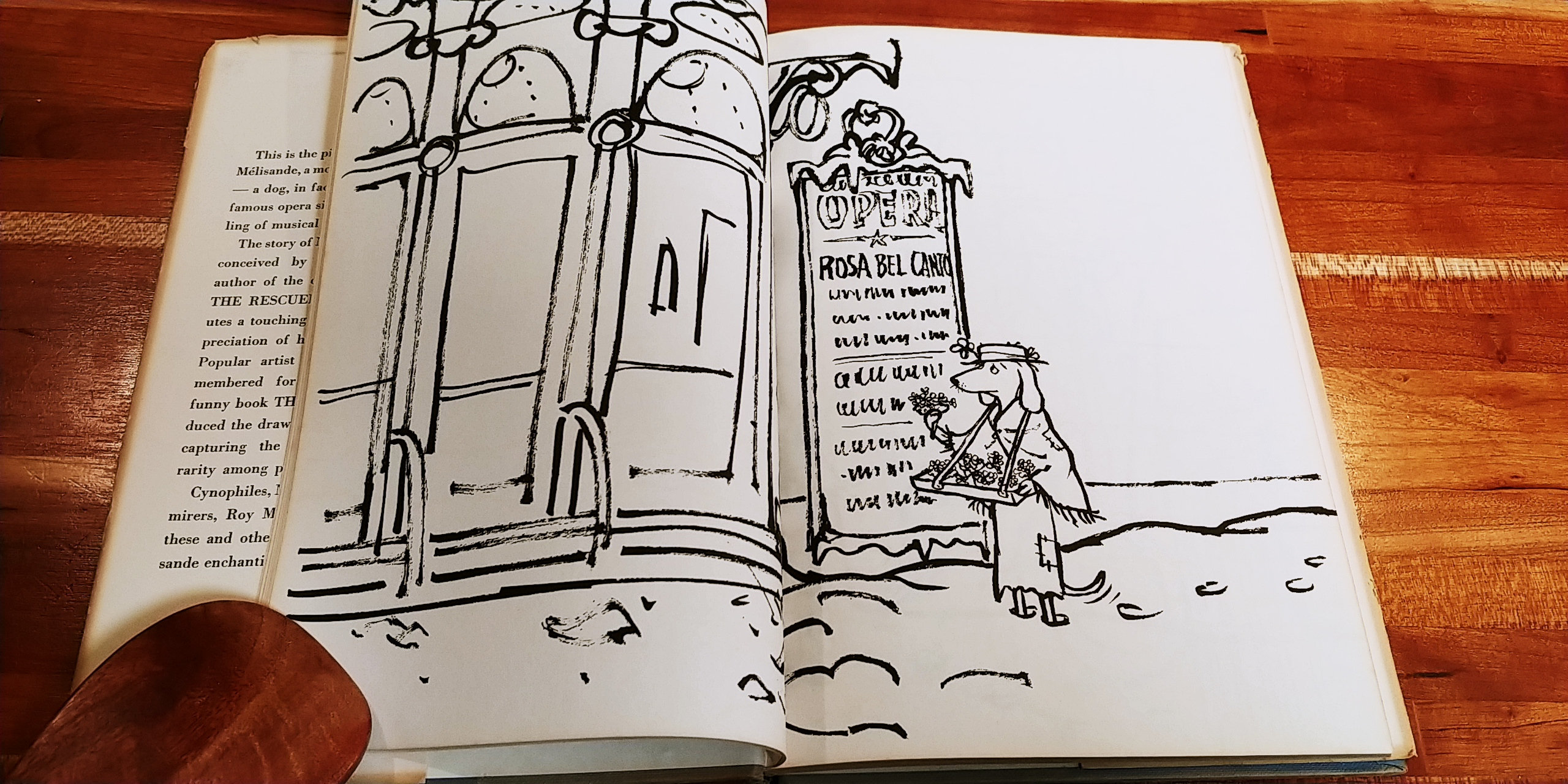 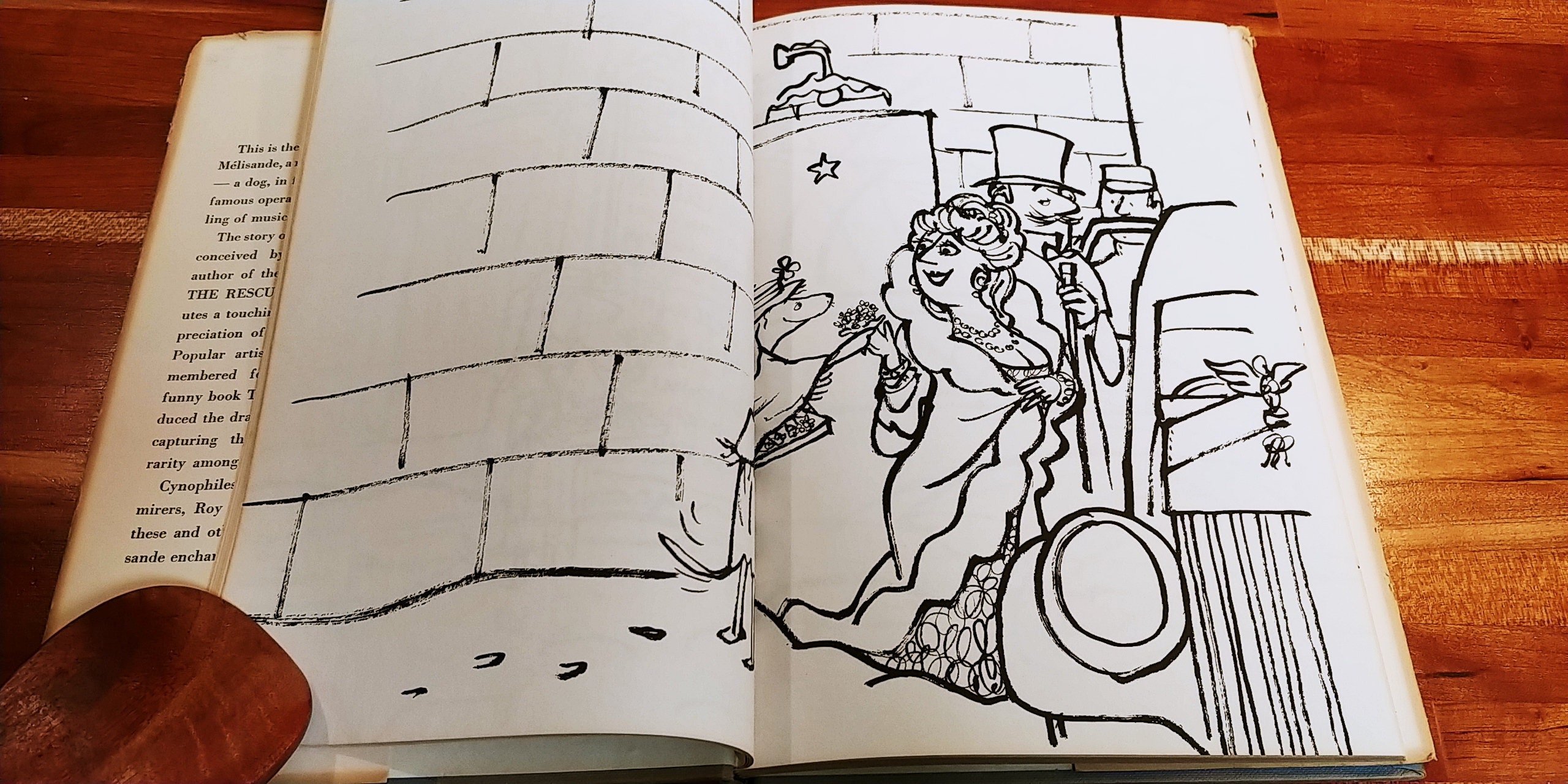 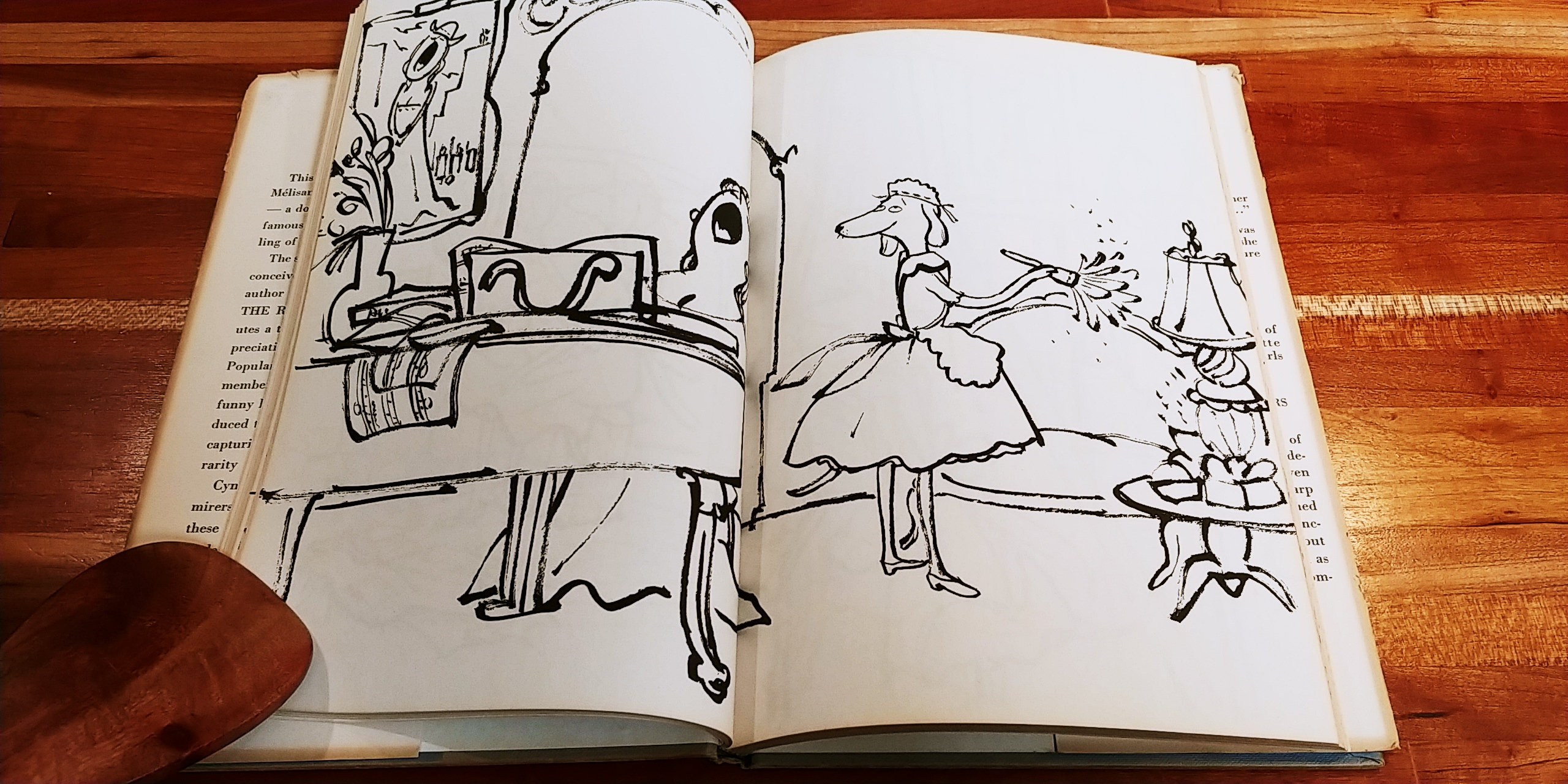 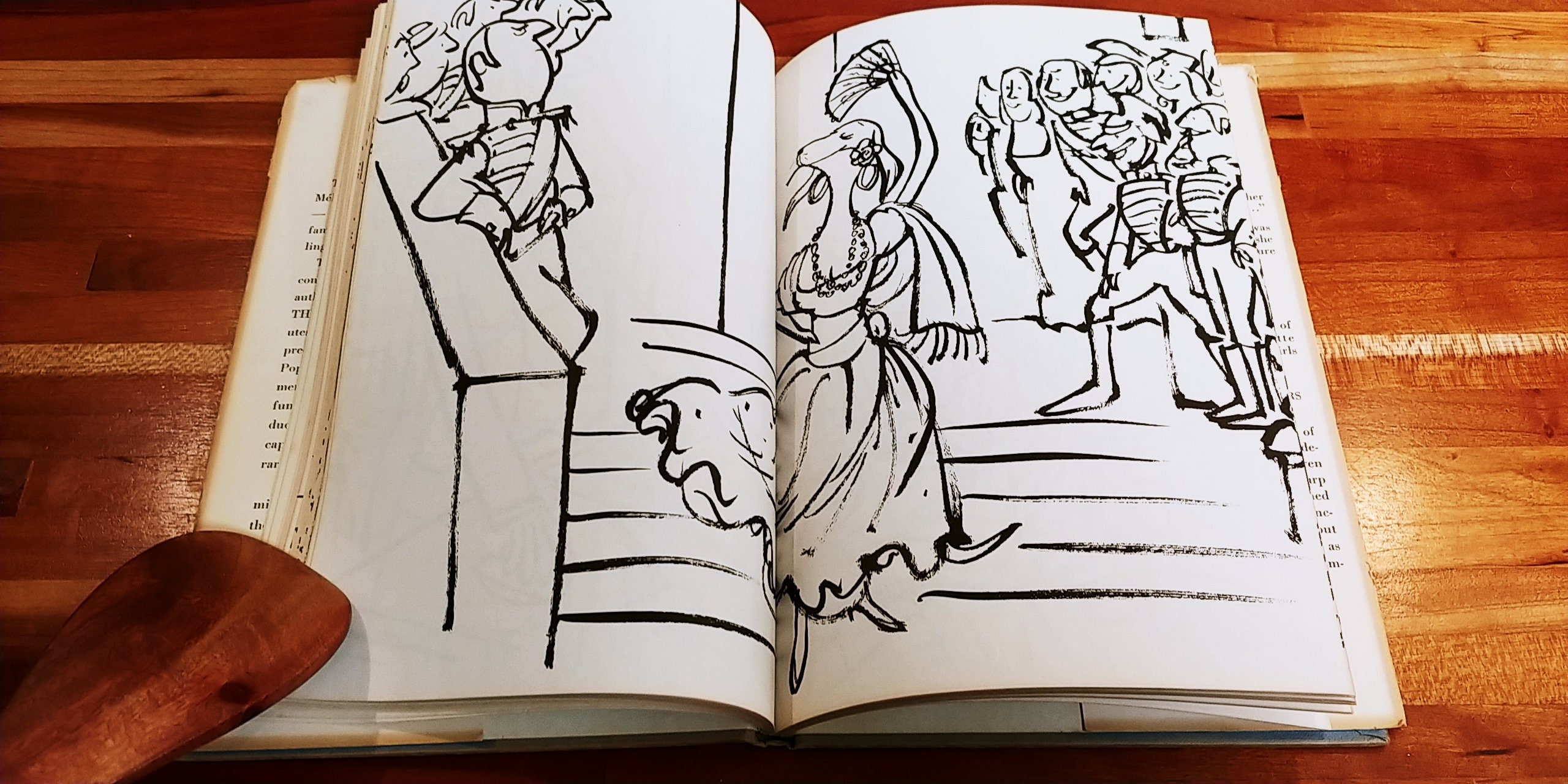 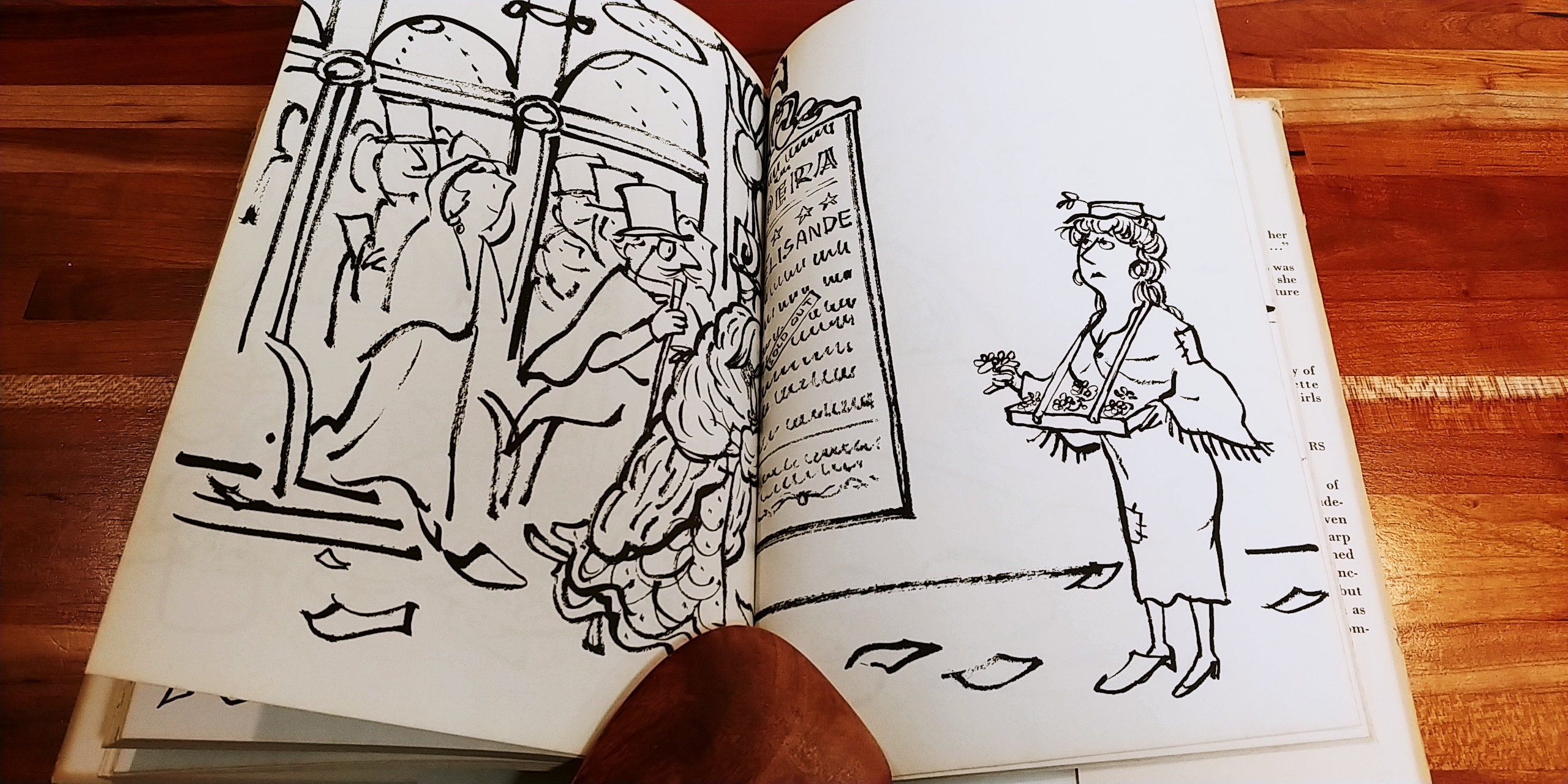 First edition of Melisande by Margery Sharp and Roy McKie, the story of an opera diva and a dog.

"To speak with any assumption of intimacy concerning the great artist known as Melisande is, alas, impossible. A most loyal and unselfish comrade - a "perfect pet" in the rehearsal room - she nonetheless hedged every private thought and emotion with a delicate reticence which none could fail to respect and beyond which only cad would attempt to pry. Many of her relations are still living - it is known she was one of a numerous family - but they too have preserved the same dignified, (and may one say it?), rare discretion. ...

"It may be recorded, however, that neither Melisande's parents nor her siblings showed any marked musical talent. They in fact devoted themselves chiefly to open-air sports. ...

"Melisande first made acquaintance with that other great diva, Rosa Bel Canto, in circumstances at once unusual and pathetic..."

After the Foreword, illustrator Roy McKie continues with a wordless story of the fortunes of a dog that sells flowers on the street. After an opera performance, she gives Bel Canto a small bouquet of flowers as the diva leaves through the back door. Bel Canto is so touched by the sweet and kind gesture she invites Melisande home. The dog becomes a house maid but over time learns music, and sings. When her patroness retires, Melisande steps into the role and becomes a celebrated and feated opera diva, until a woman outside the opera house hands her a bouquet of flowers, and Melisande invites her home. And the story continues.

Melisande was Margery Sharp's (1905 - 1991) first children's novel but she became best known, thanks to Disney, for The Rescuers series. She wrote twenty-seven adult novels, including The Nutmeg Tree (adapted for the movie Julia's Misbehaves), Cluny Brown (also a movie), and The Eye of Love (the Martha Trilogy).

Illustrator Roy McKie (1921 - 2015) has a lengthy bibliography of wonderful children's books, including many of the Dr. Seuss books and Beginner Books.

The book itself has a well-traveled story; published in the US in 1960, Melisande traveled to Singapore, where it spent time at the Donald Moore Galleries, and returned to the US and a bookshelf in Tucson. After WW II, Brit Donald Moore and his wife Joanne contributed greatly to Singapore's art scene over the next three decades. He became known as "Singapore's first impresario". An interesting character.

Condition*: Very Good/Fair. Dust jacket: Sunned along the spine and exposed edges; large closed tear on the front; corners and head of the spine are chipped; small amount of soiling on the front. Interior: Bookshop and owner stamps on front flyleaf. Interior pages are clean, undamaged, and complete.