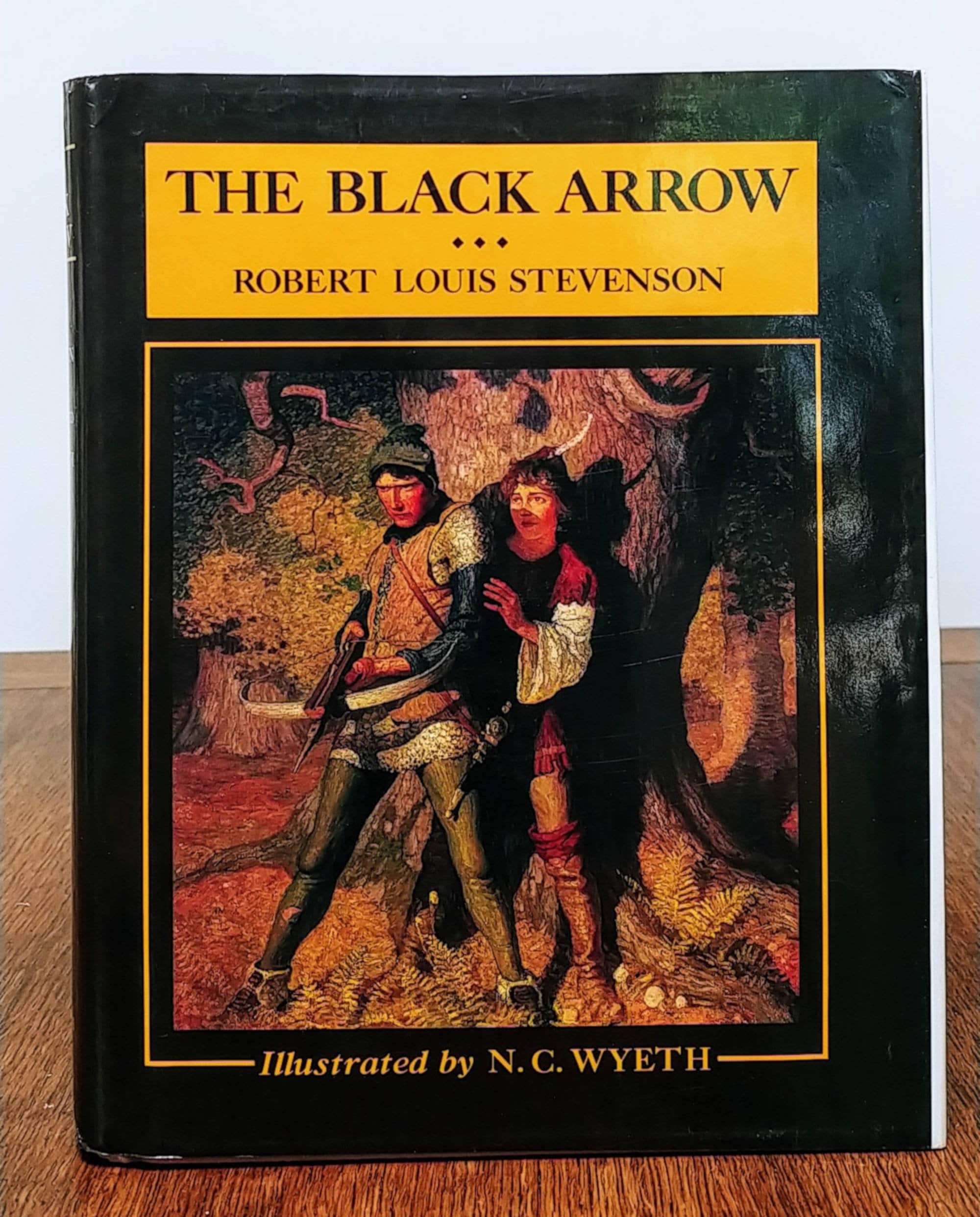 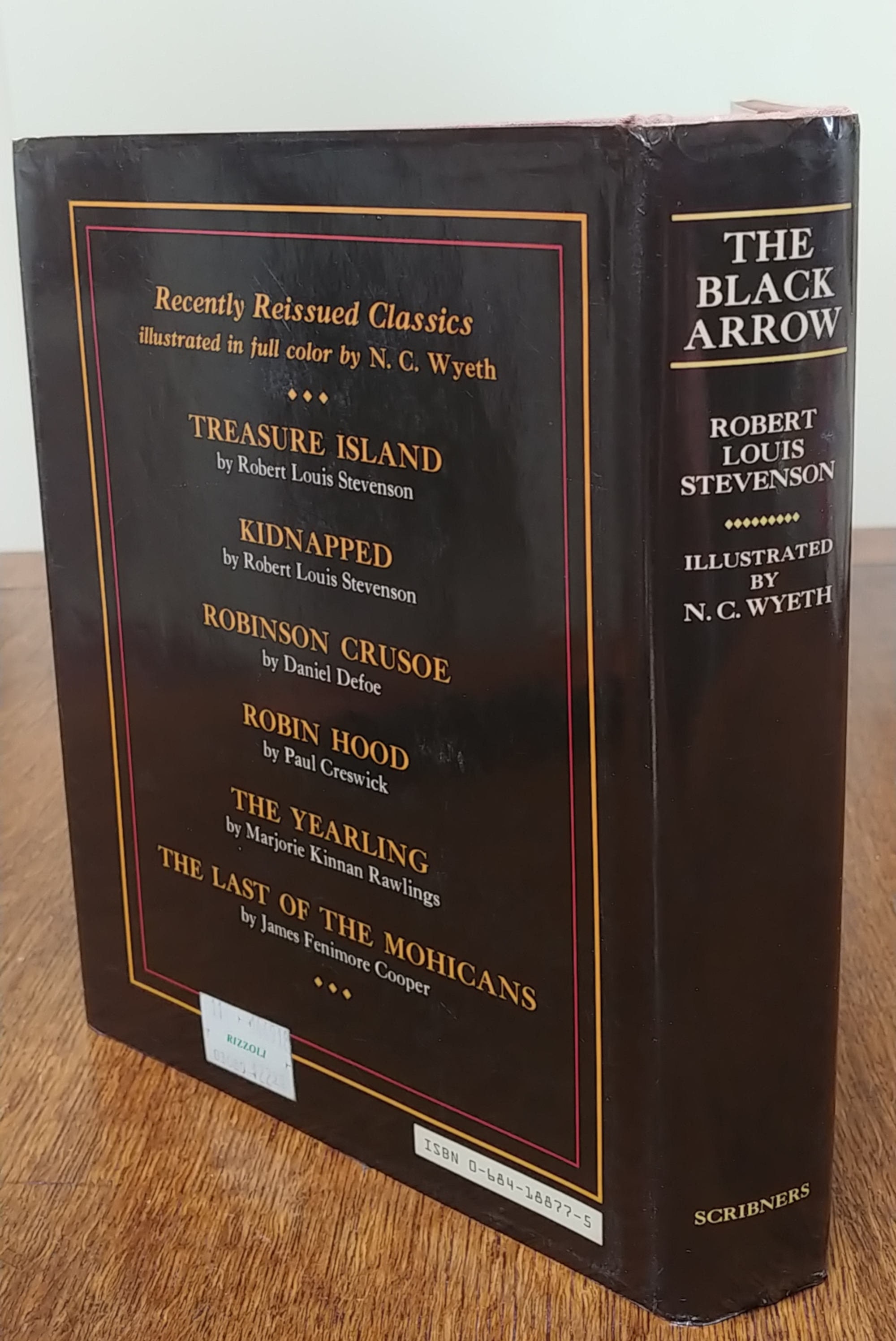 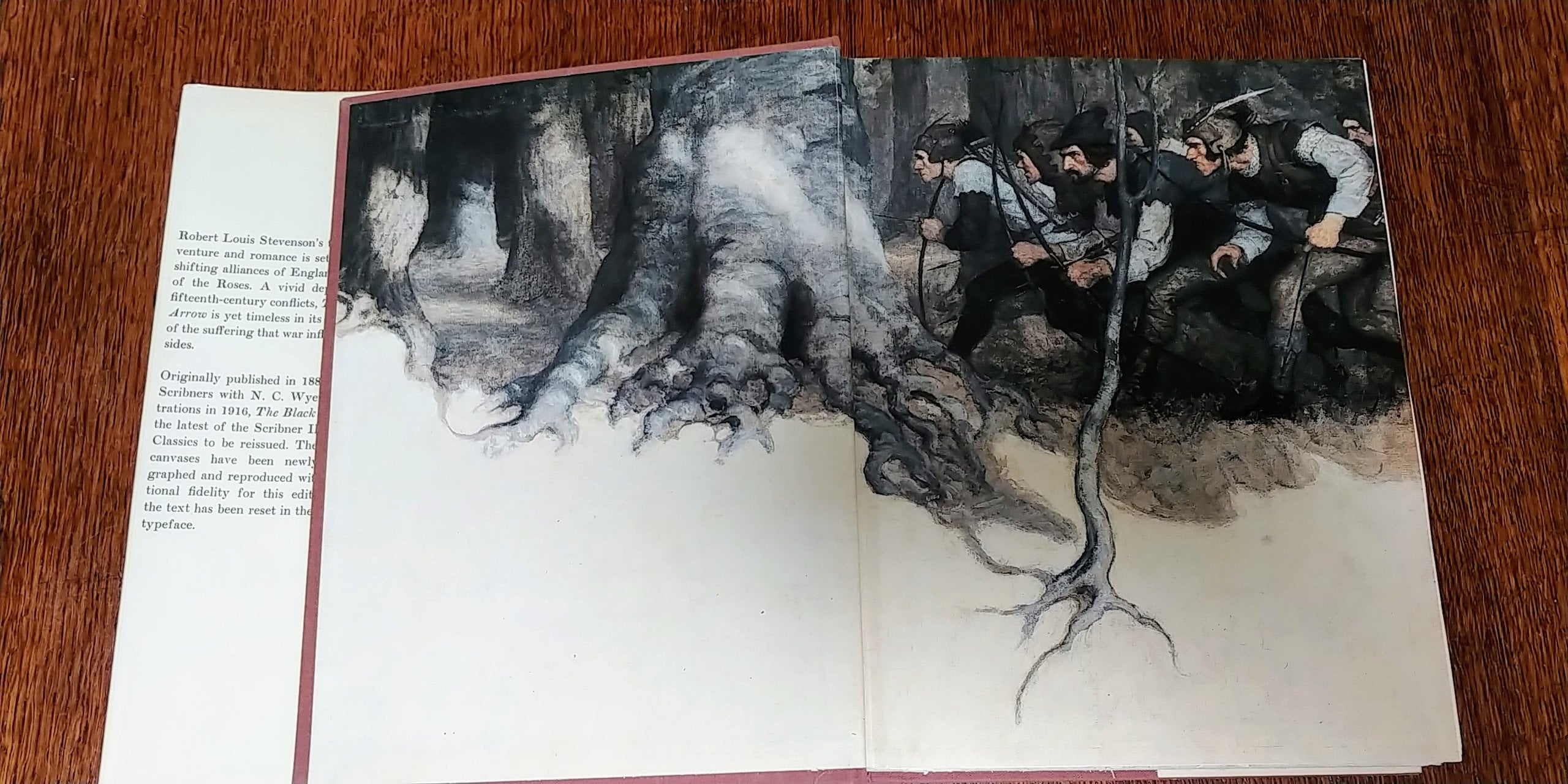 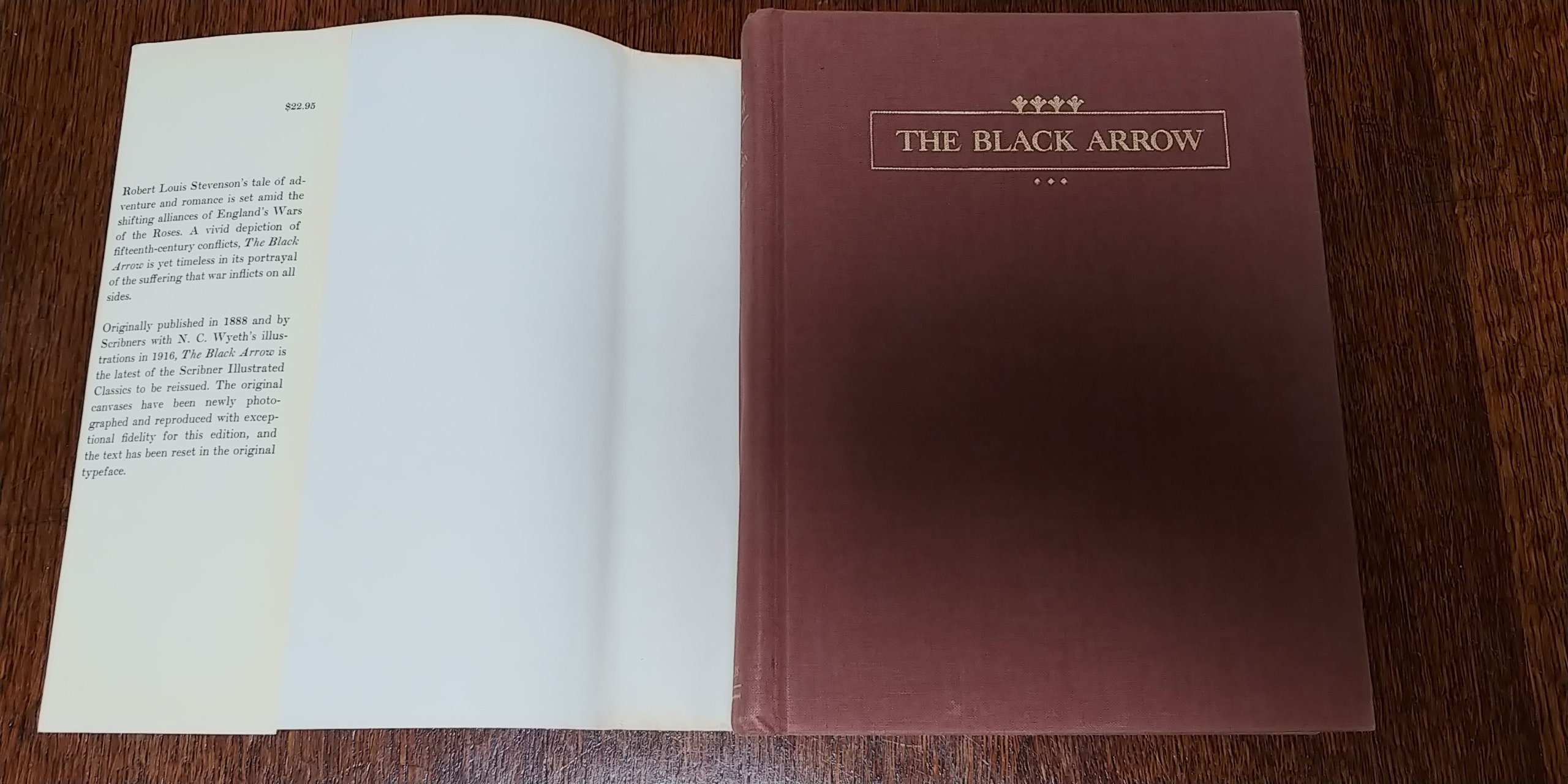 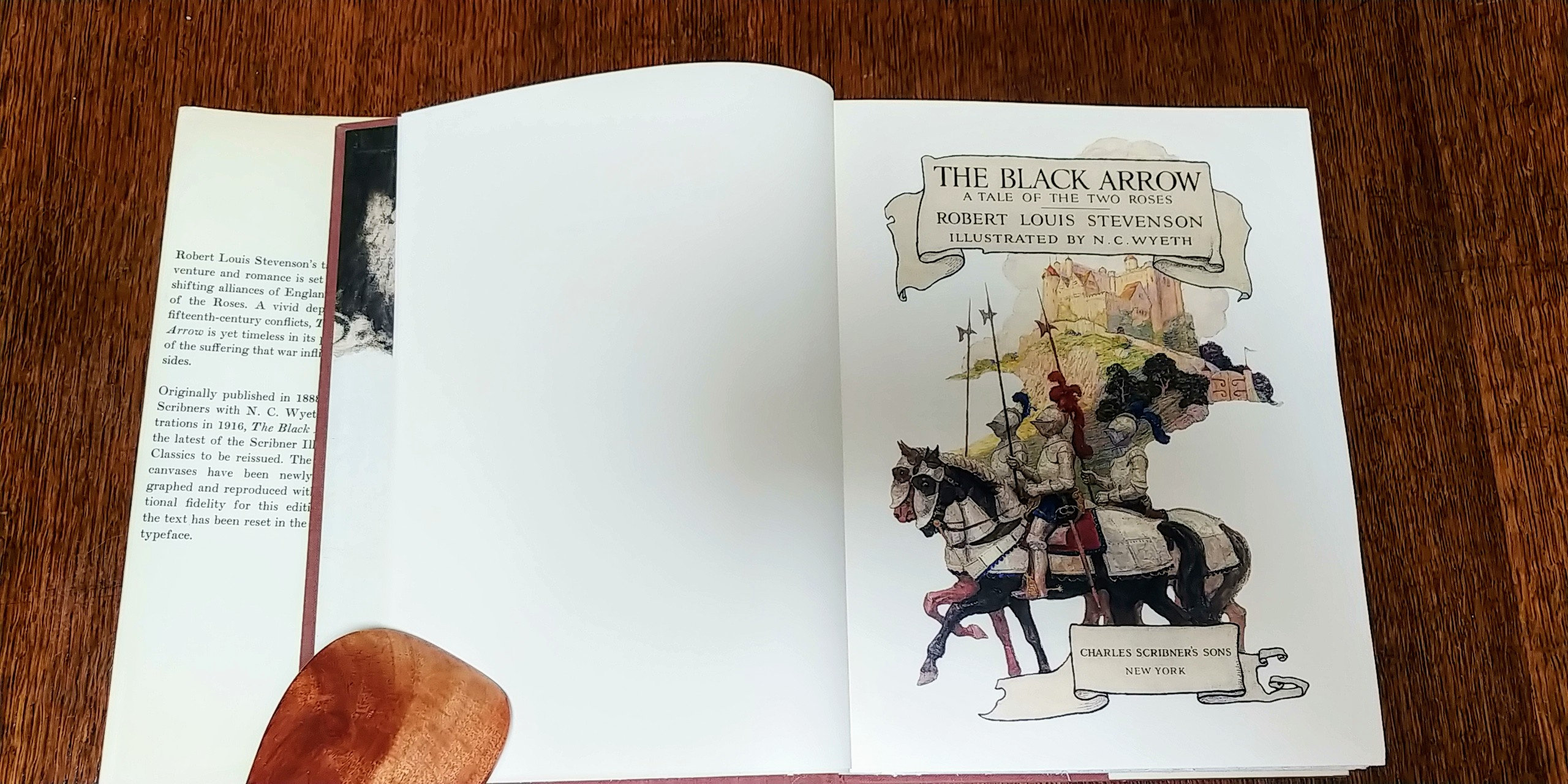 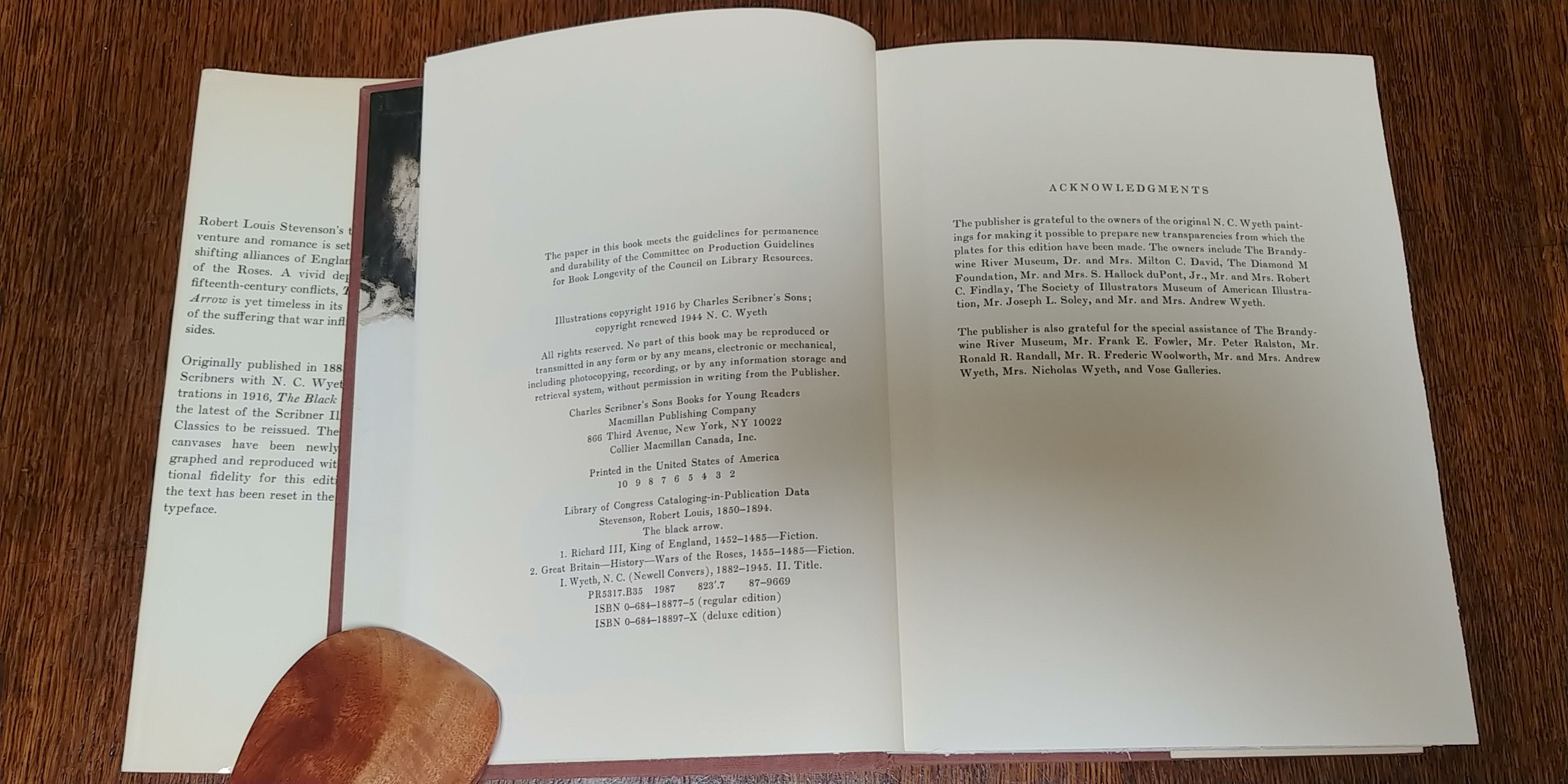 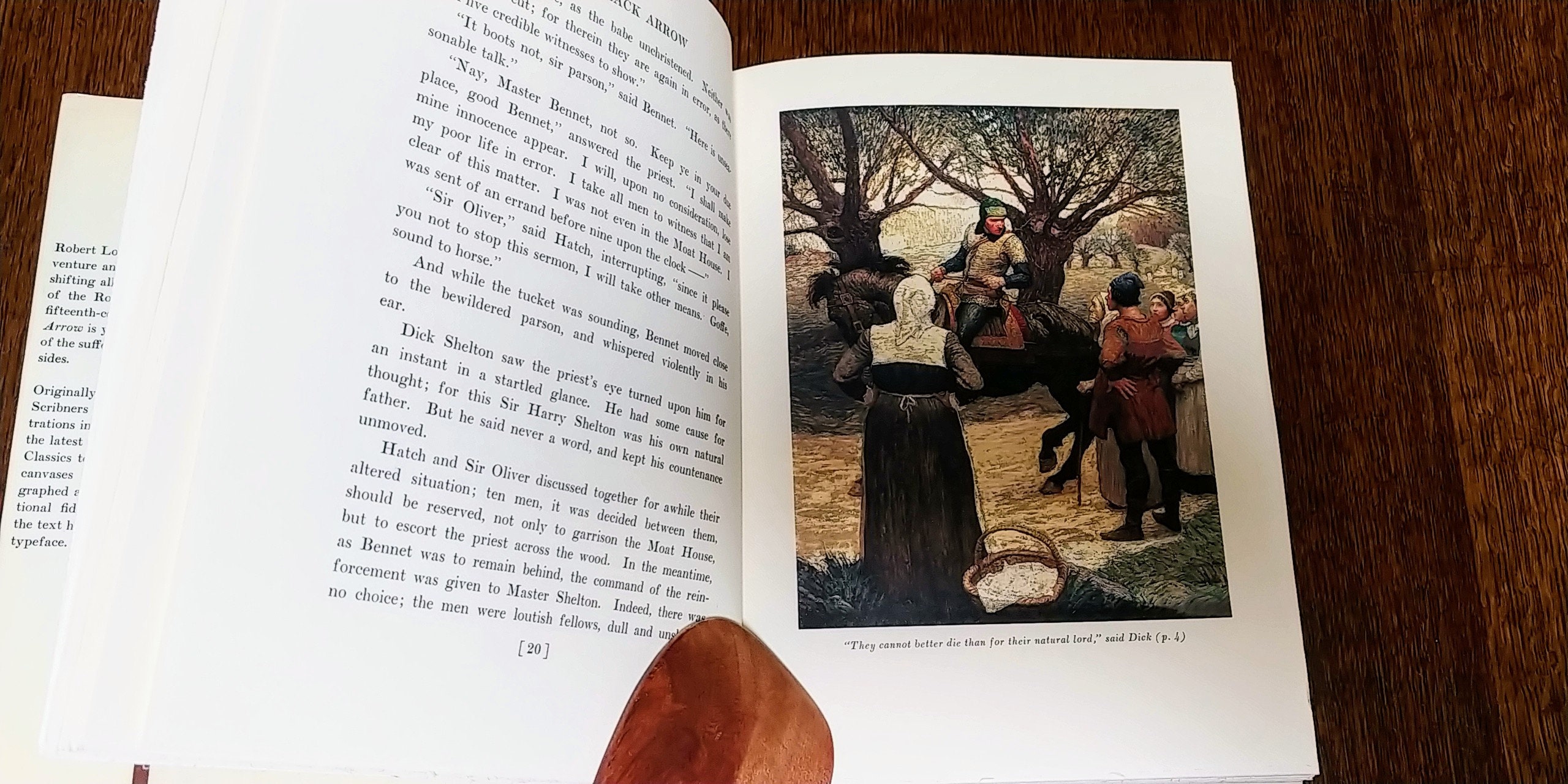 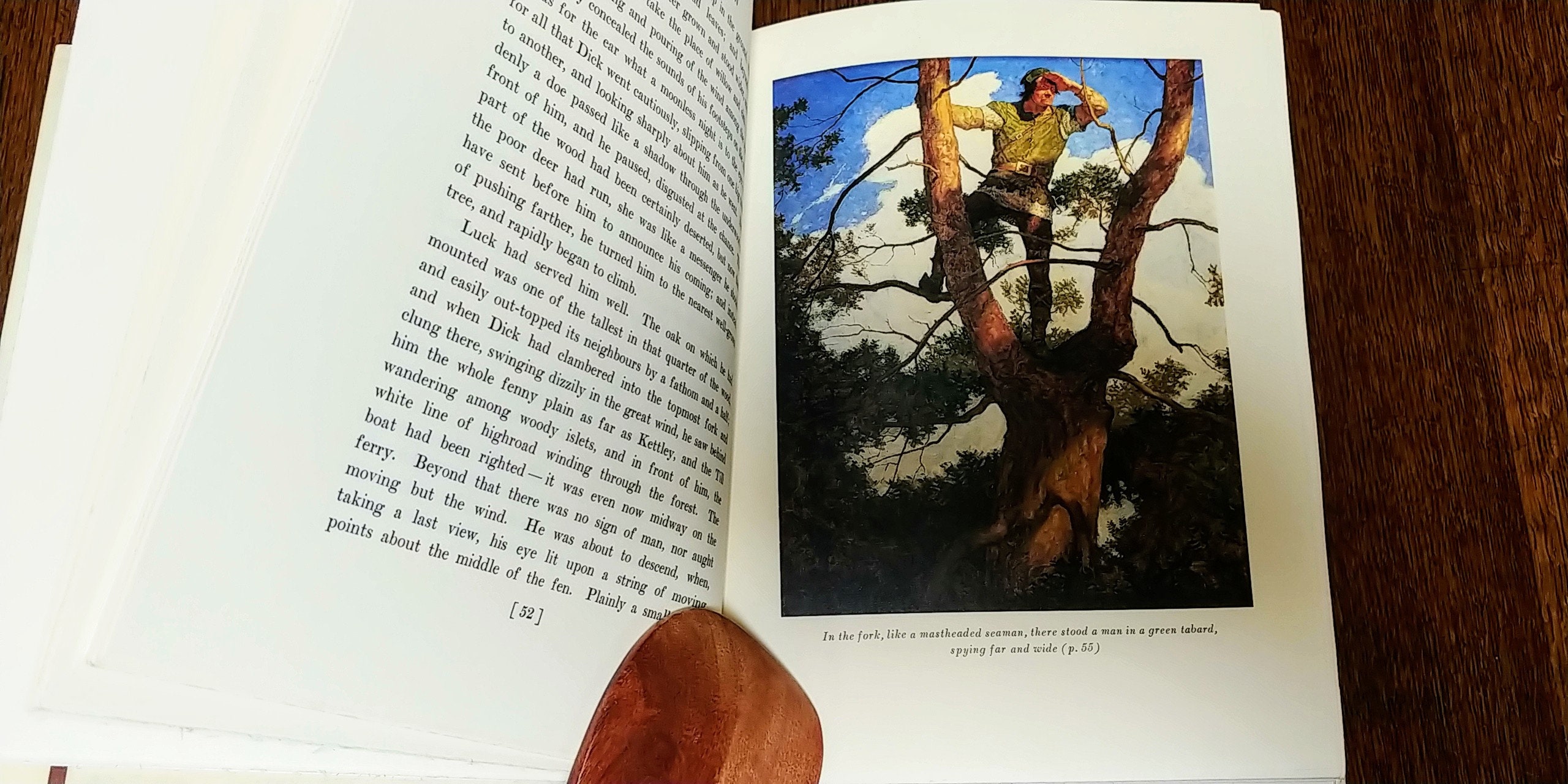 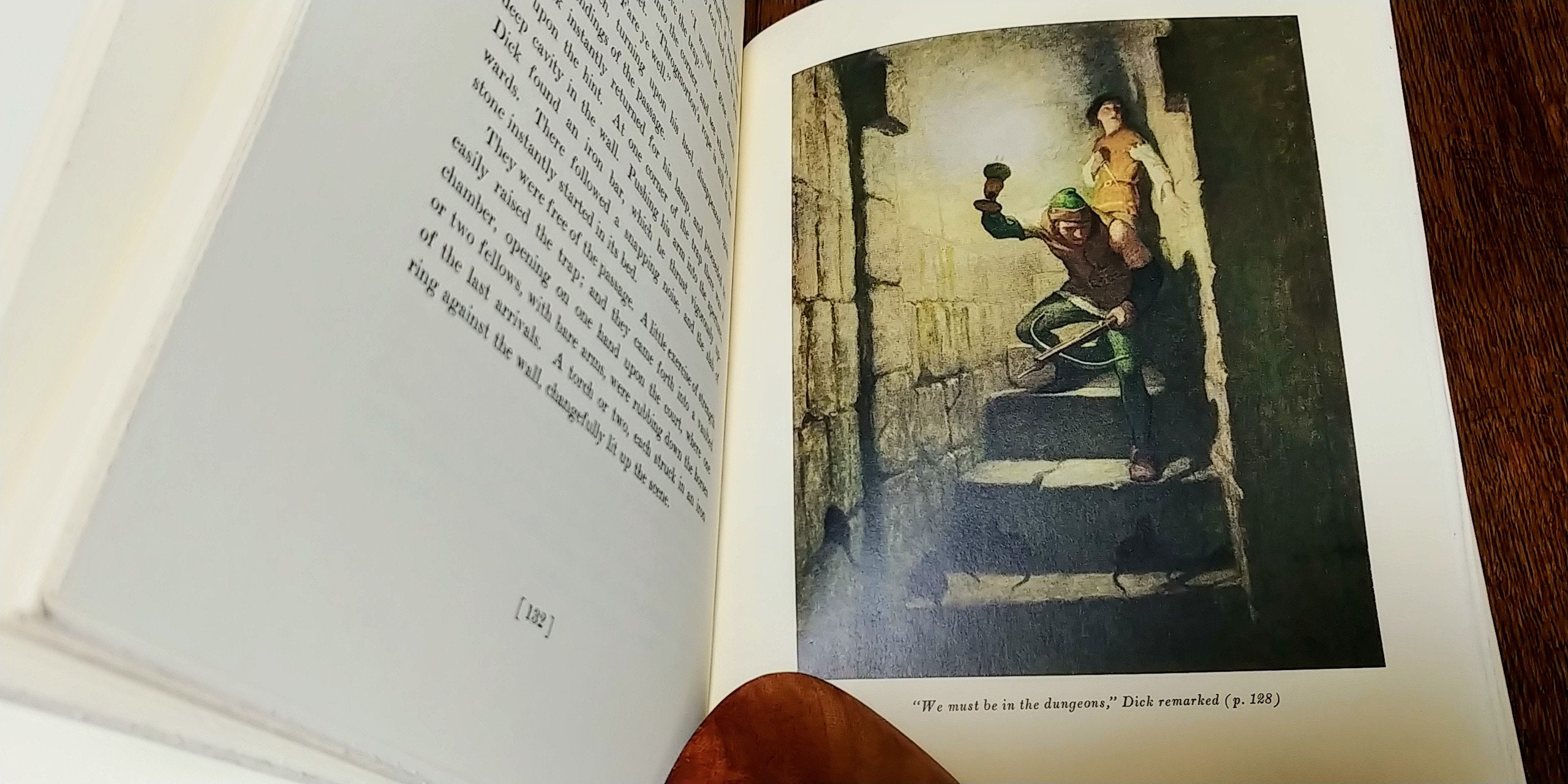 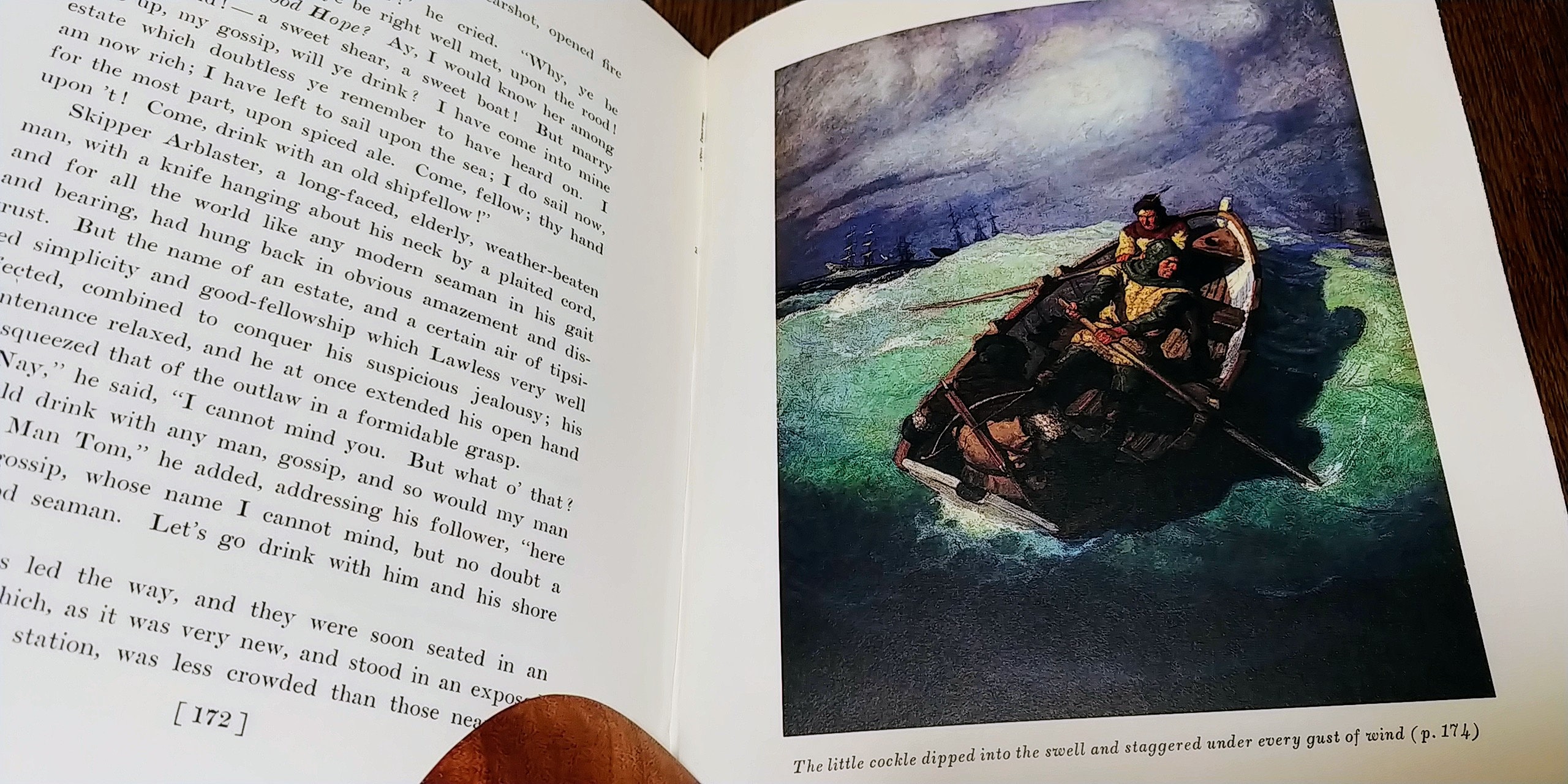 1944 edition of The Black Arrow: A Tale of the Two Roses by Robert Louis Stevenson, illustrated by N. C. Wyeth.

"Robert Louis Stevenson's tale of adventure and romance is set amid the shifting alliances of England's Wars of the Roses. A vivid depiction of fifteenth-century conflicts, The Black Arrow is yet timeless in its portrayal of the suffering that war inflicts on all sides."

"On a certain afternoon, in the late springtime, the bell upon Tunstall Moat House was heard ringing at an unaccustomed hour. Far and near, in the forest and in the fields along the river, people began to desert their labours and hurry towards the sound; and in Tunstall hamlet, a group of poor country folk stood wondering at the summons."

CHAPTER I
At the Sign of the Sun in Kettley

"Sir Daniel and his men lay in and about Kettley that night, warmly quartered and well patrolled. But the Knight of Tunstall was one who never rested from money-getting; and even now, when he was on the brink of an adventure which should make or mar him, he was up an hour after midnight to squeeze poor neighbours. He was one who trafficked greatly in disputed inheritances; it was his way to buy out the most unlikely claimant, and then, by the favour he curried with great lords about the king, procure unjust decisions in his favour; or, if that was too roundabout, to seize the disputed manor by force of arms, and rely on his influence and Sir Oliver's cunning in the law to hold what he had snatched. Kettley was one such place; it had come very lately into his clutches; he still met with opposition from the tenants; and it was to oversaw discontent that he had let his troops this way."

Robert Louis Stevenson (1850-1894) was a Scottish writer of enduring classics such as Treasure Island, Kidnapped, Strange Case of Dr. Jekyll ad Mr. Hyde, and a Child's Garden of Versus. His literary reputation rises and falls according to fashions in literary fiction but Stevenson remains one of the greats in the English-speaking canon.

Newell Convers Wyeth (1882-1945) was the first of three generations of influential artists, most notably as the father of Andrew Wyeth and grandfather of Jamie Wyeth. As an illustrator, N. C. Wyeth, who studied under Howard Pyle, the father of American illustration, is best known for illustrating the Scribner Classics, including Westward Ho!. As a painter of over 3,000 works, among his best known are the murals depicting the Pilgrims at Plymouth commissioned by Metropolitan Life Insurance.