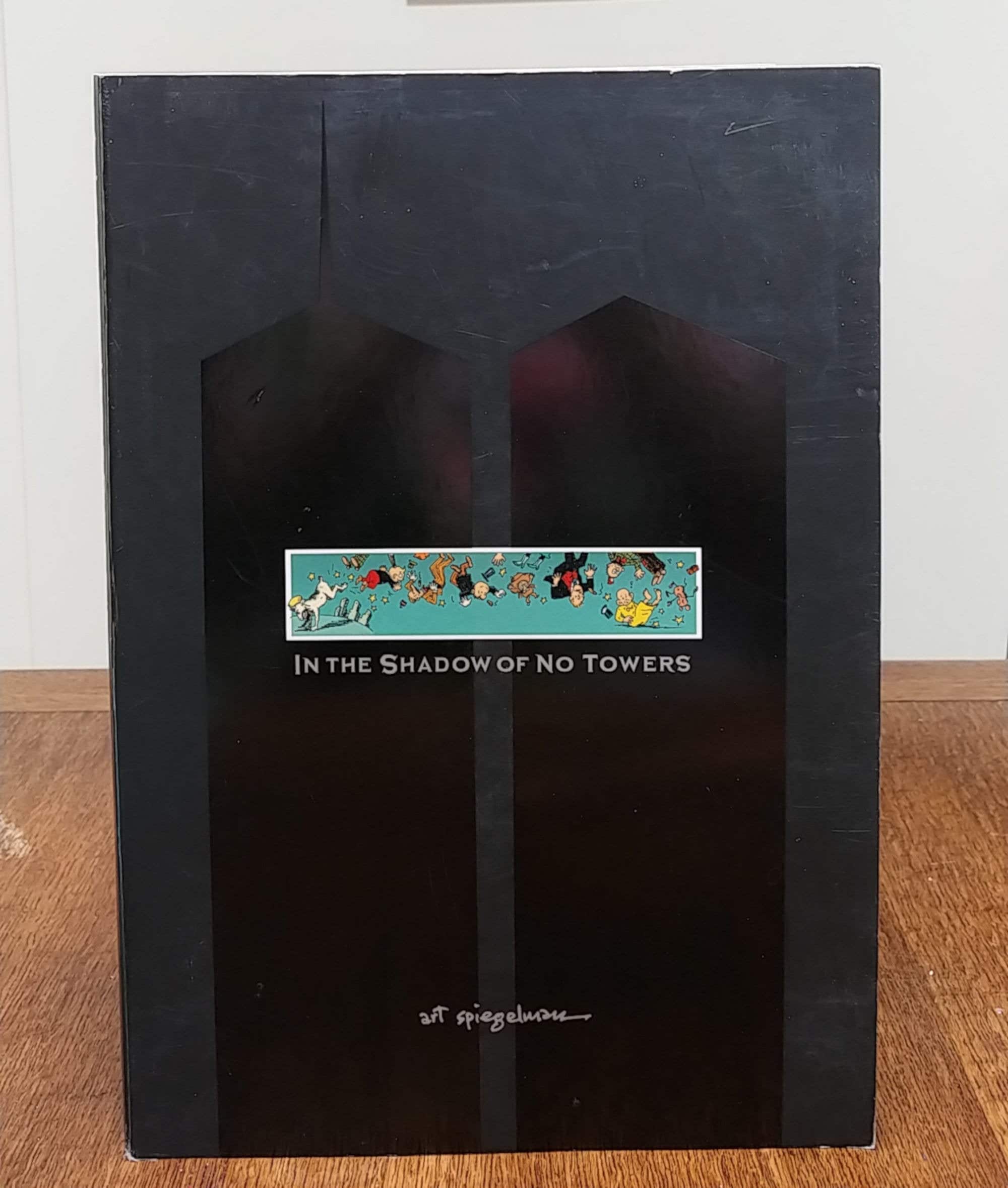 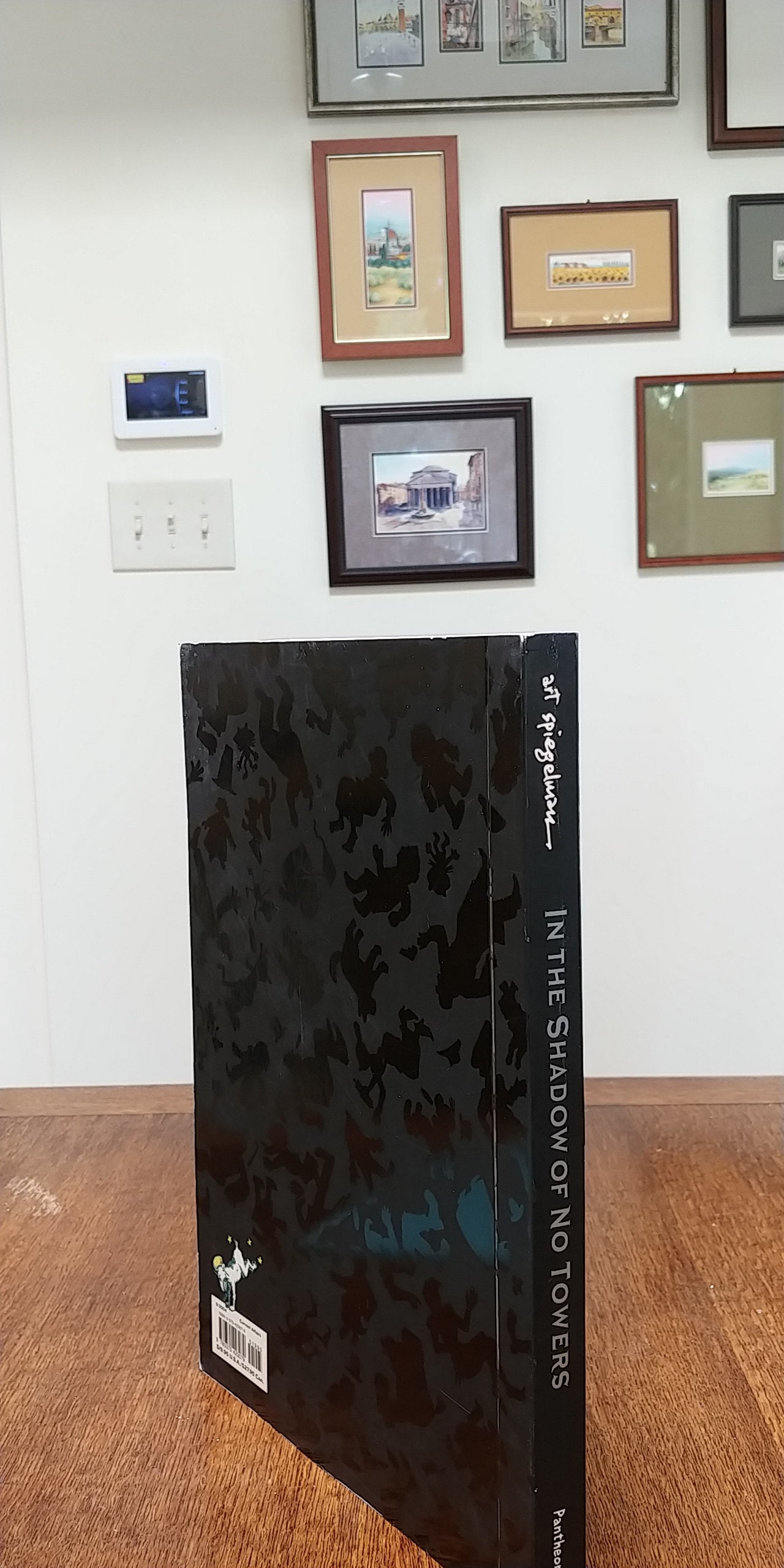 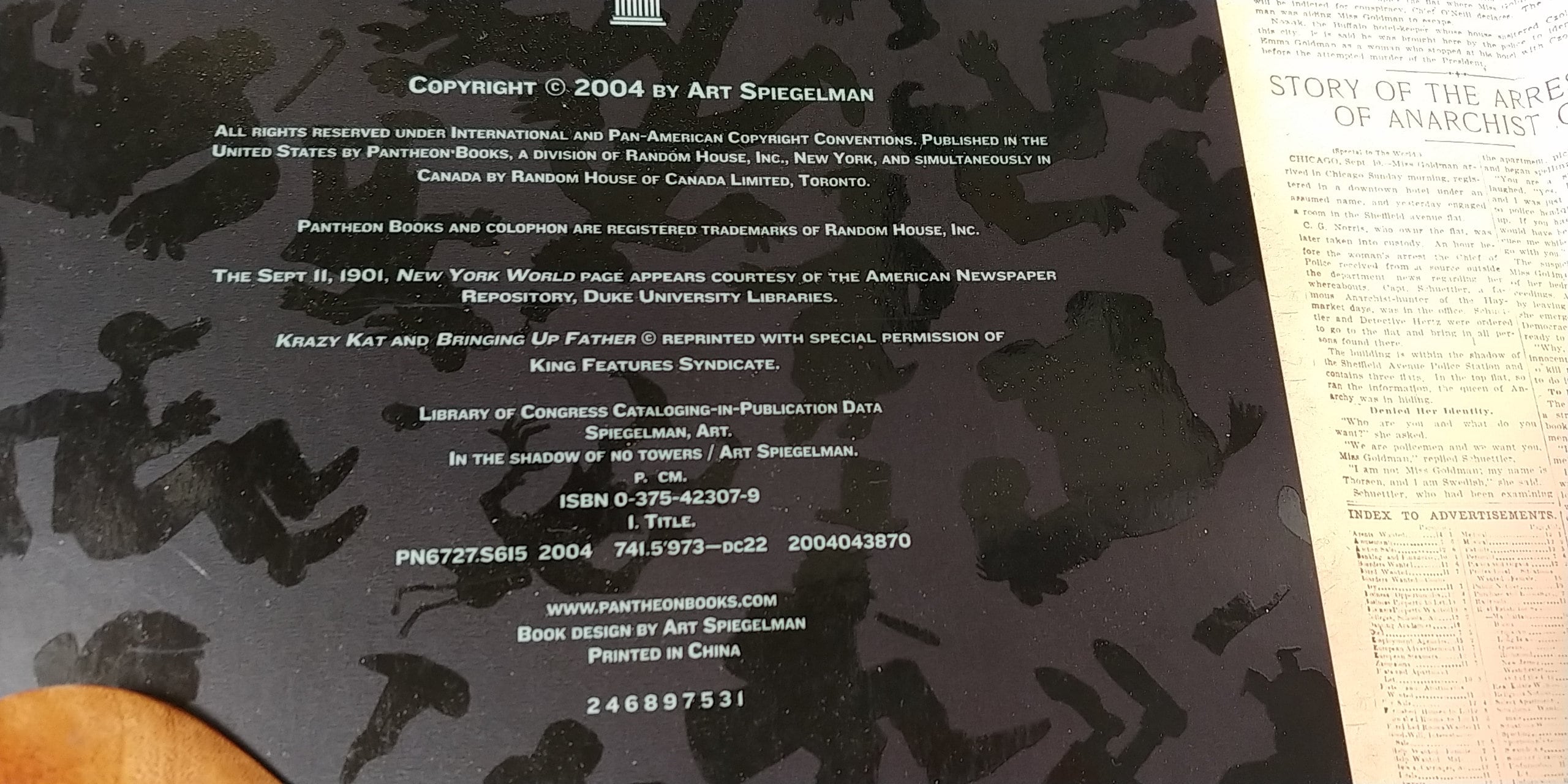 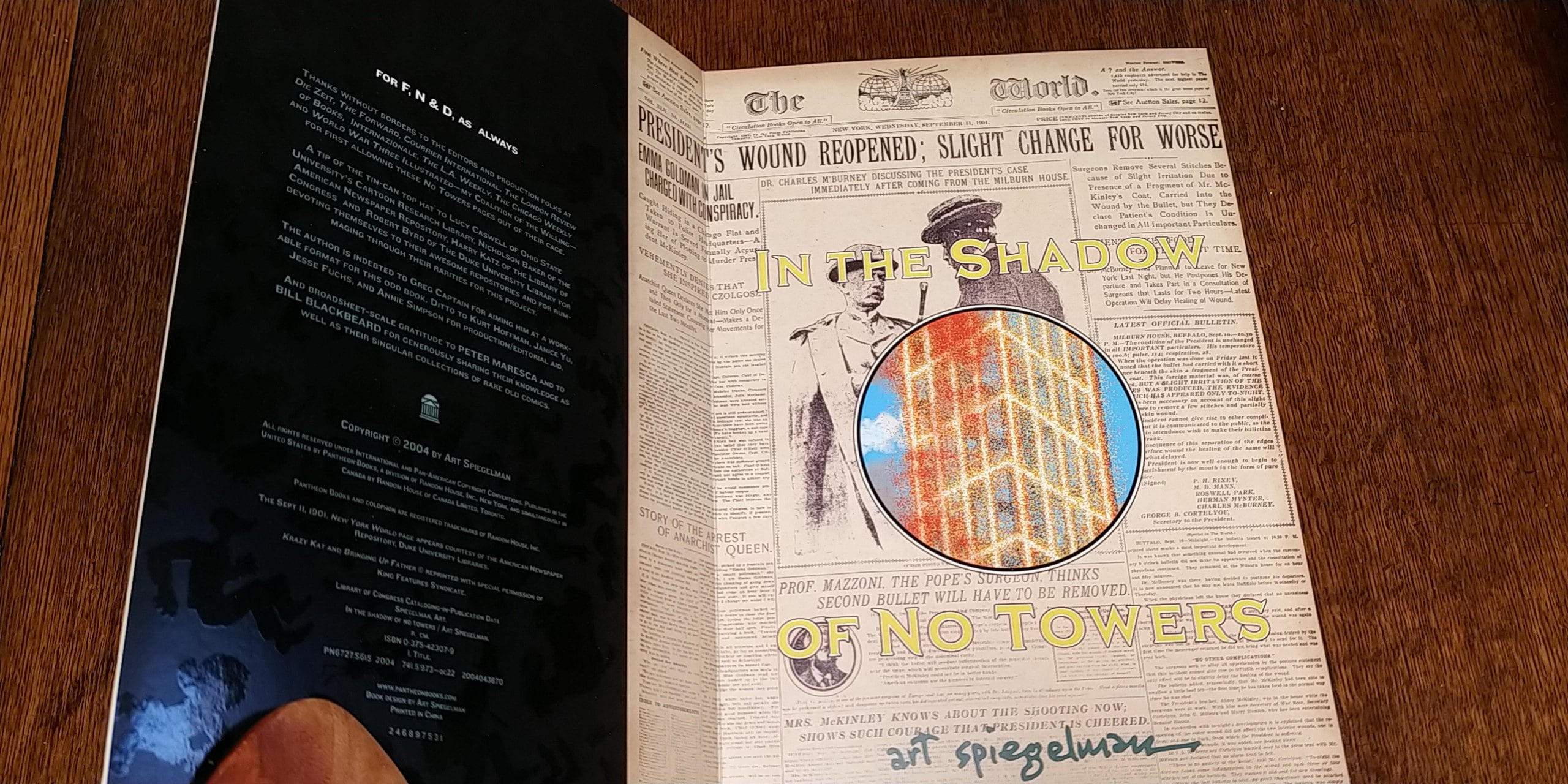 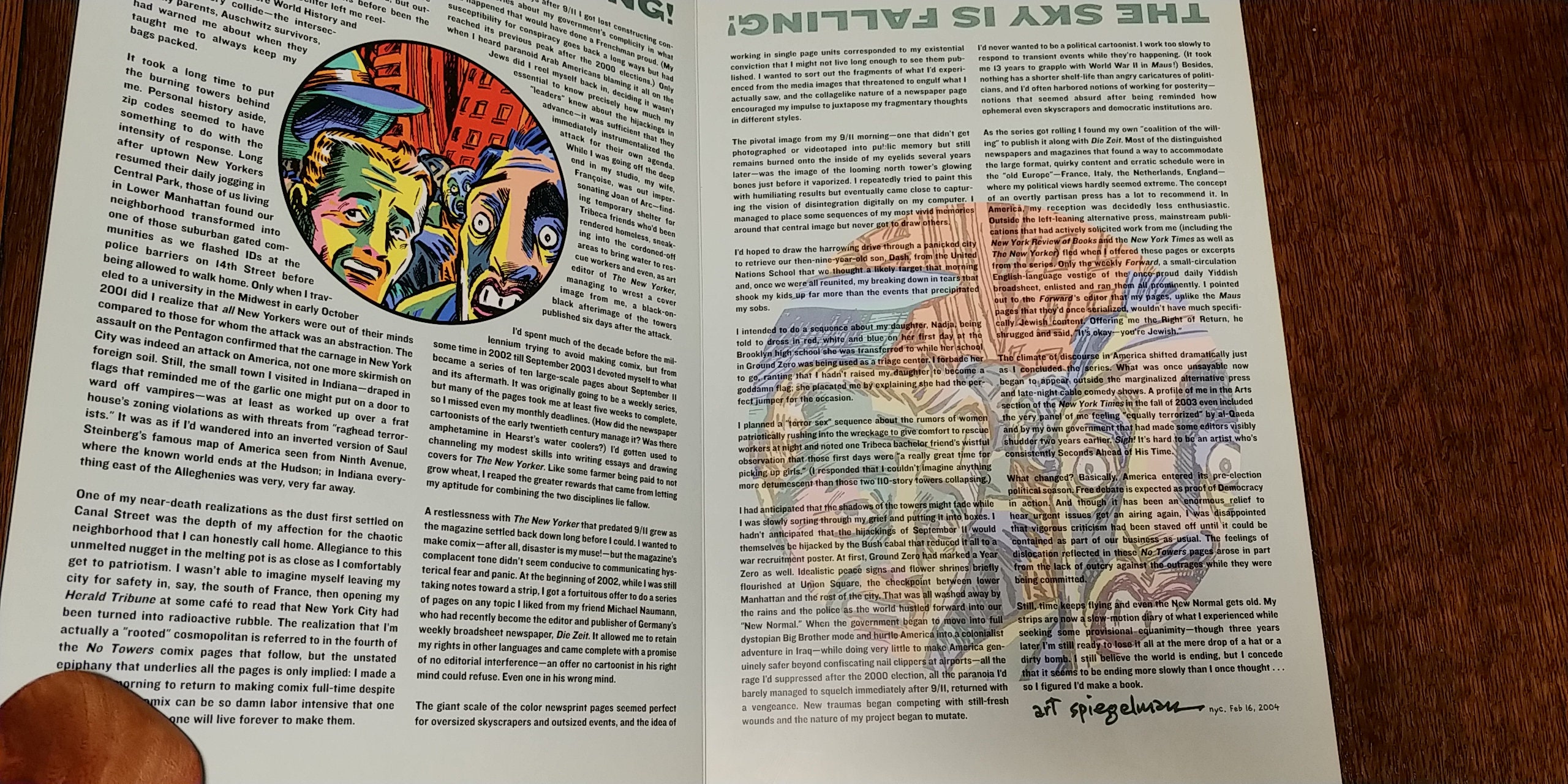 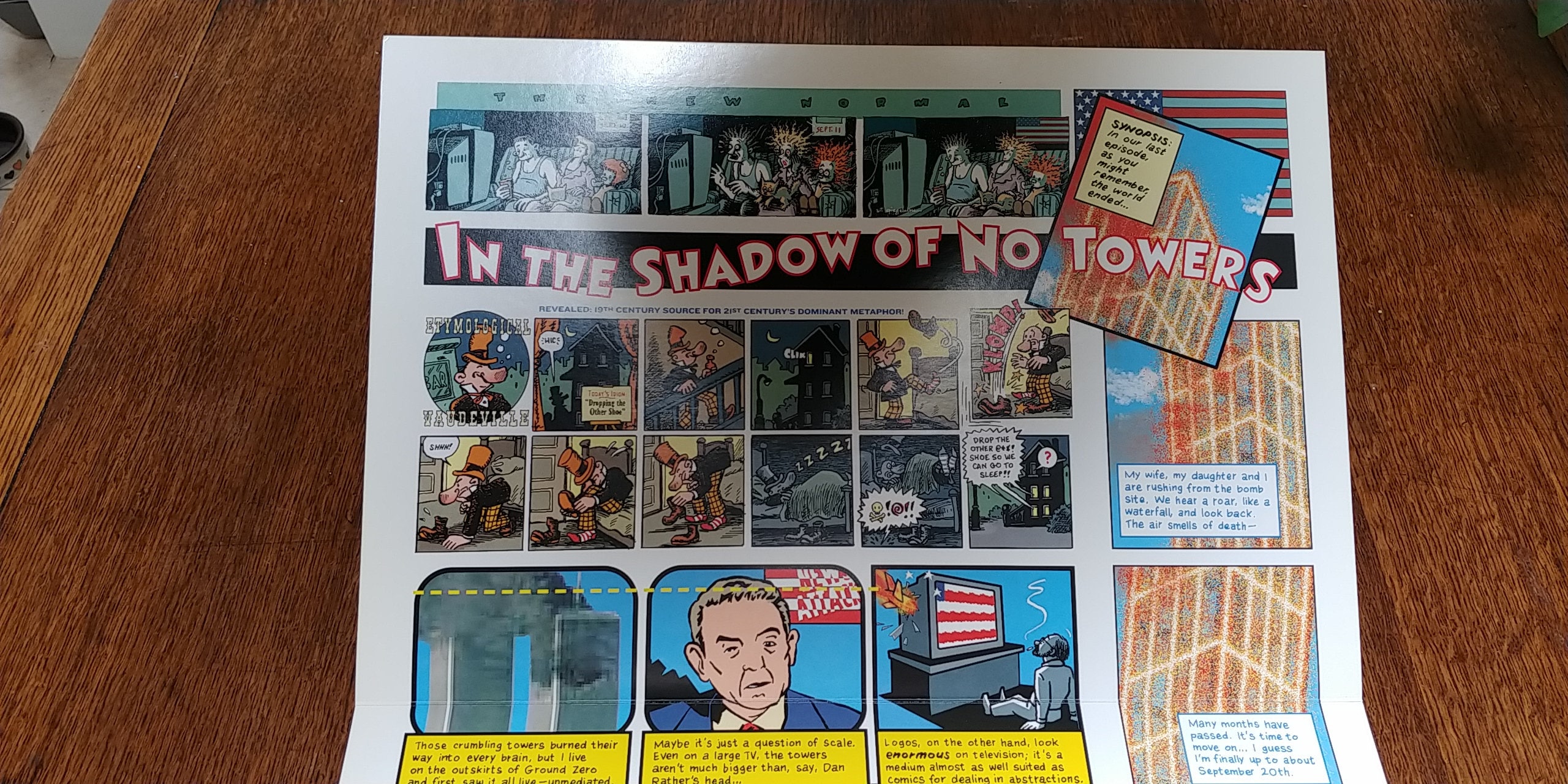 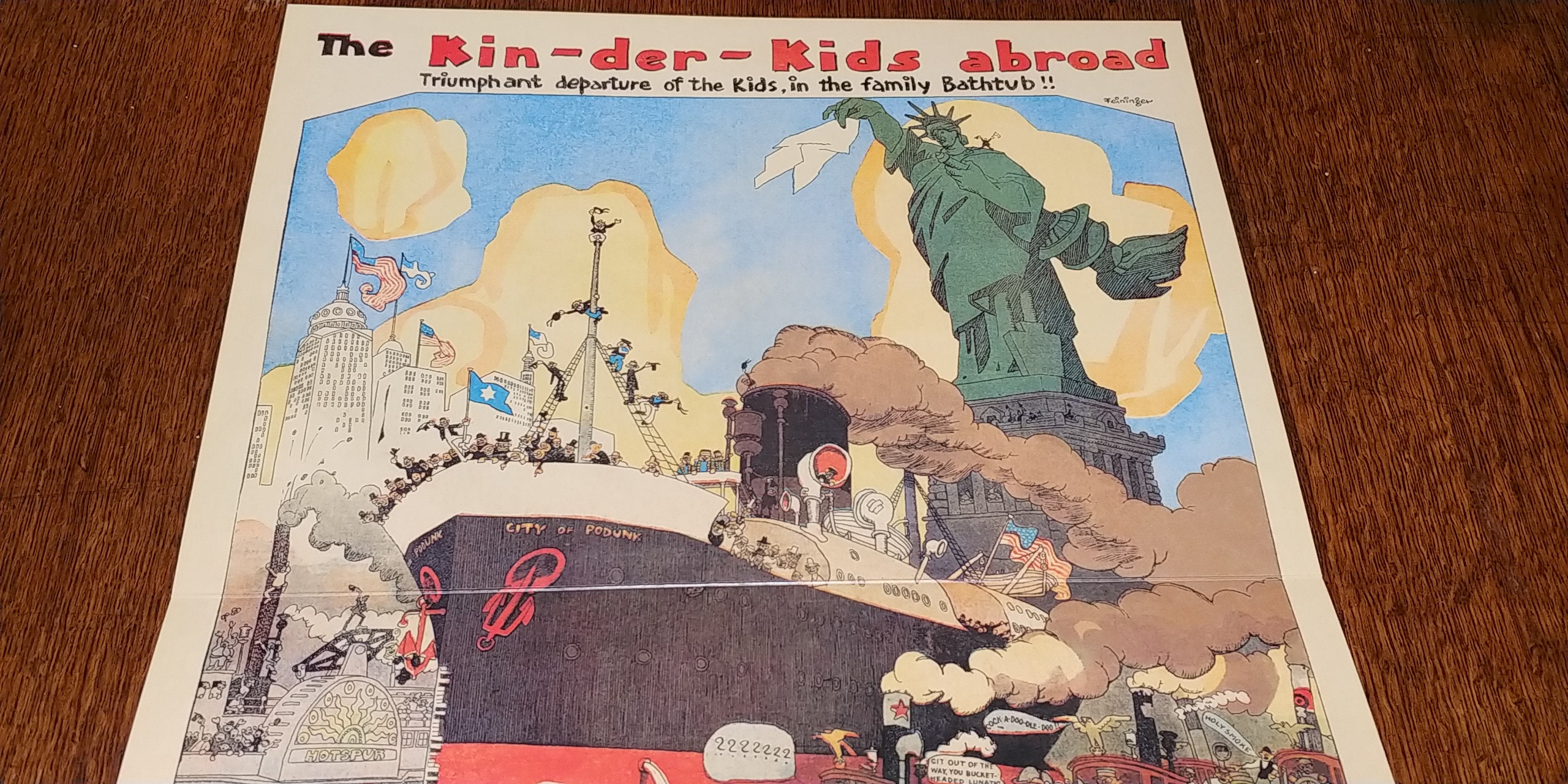 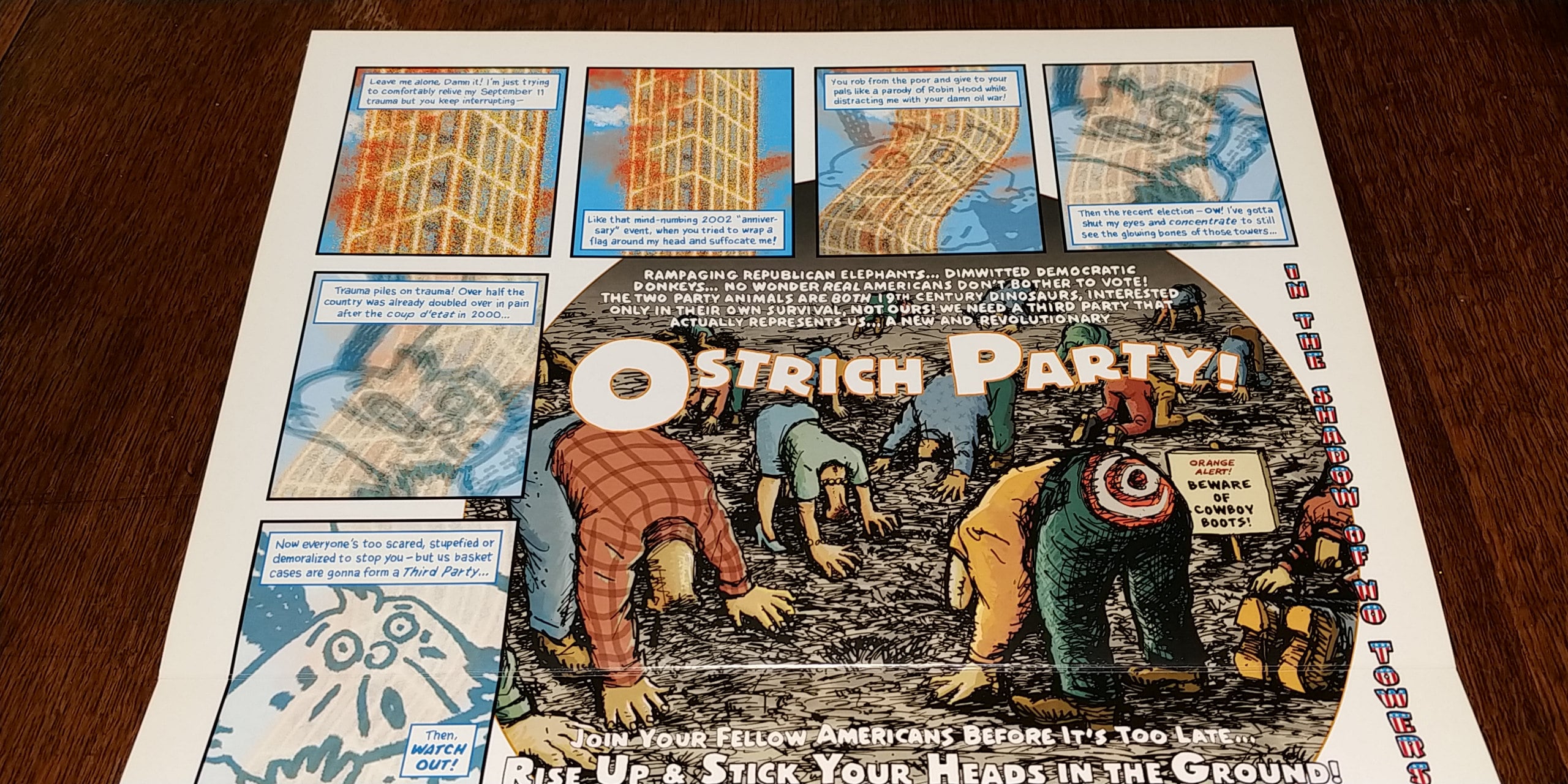 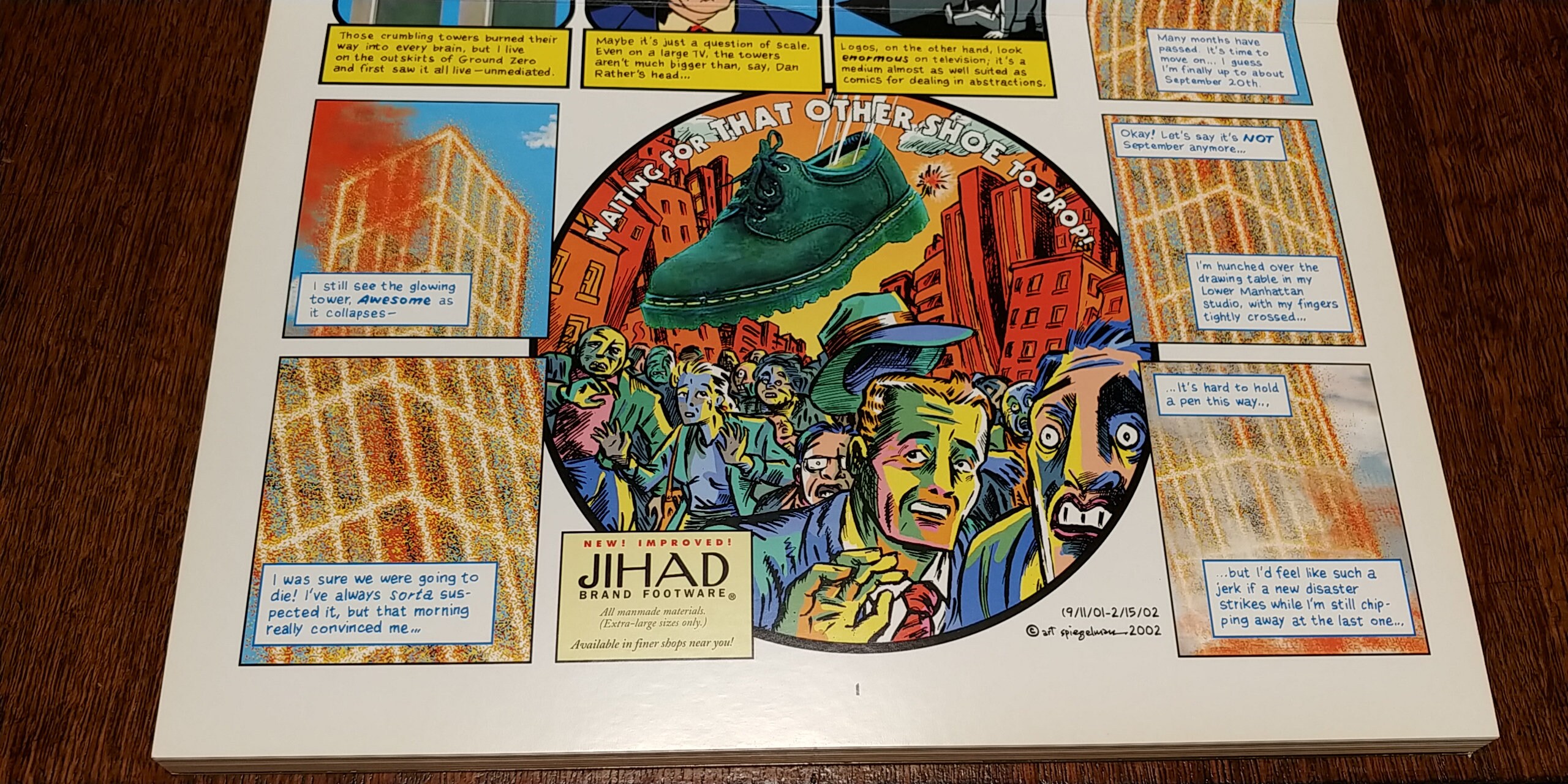 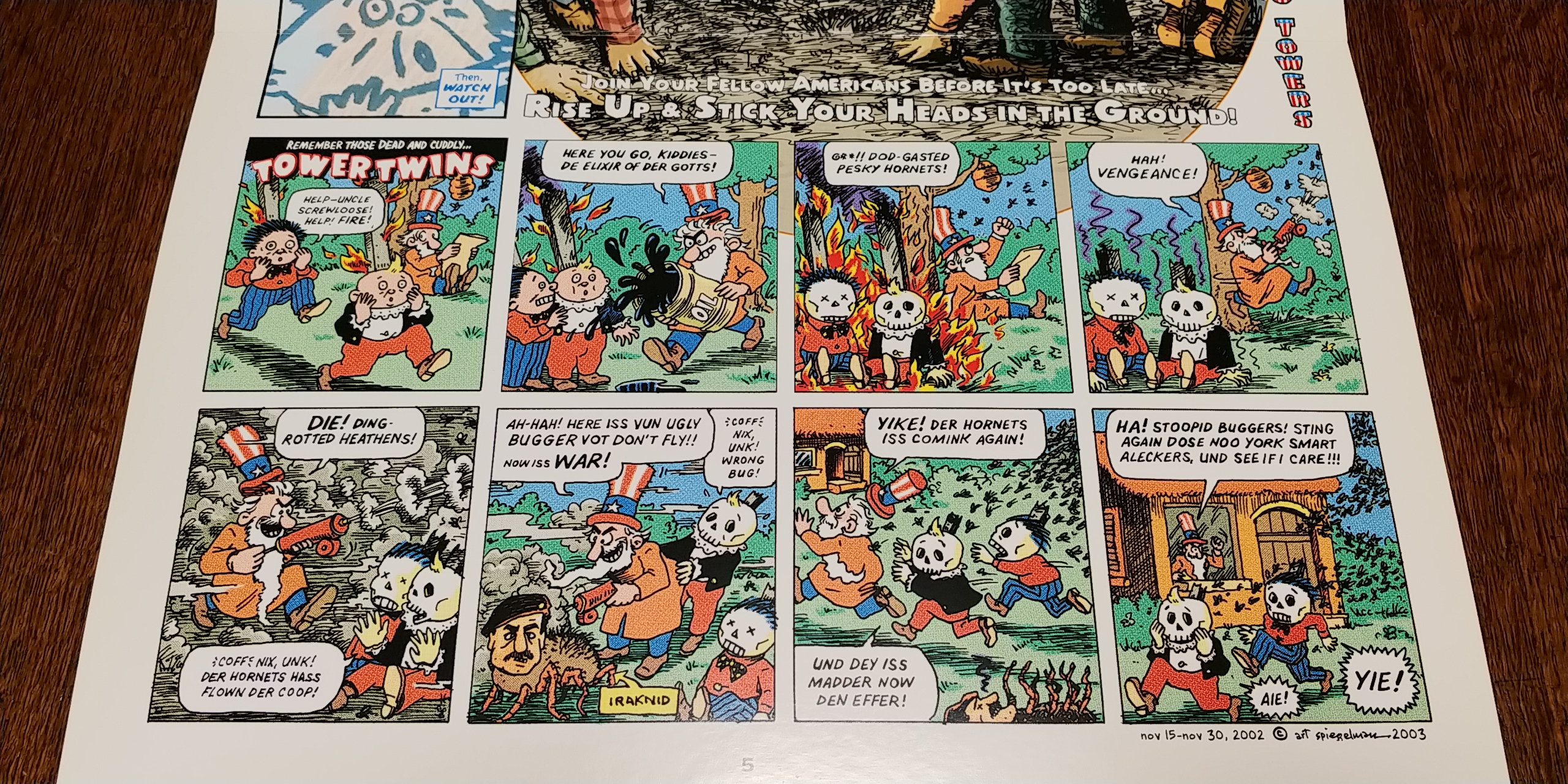 In the Shadow of No Towers by Art Spiegelman - First Edition 2004 - Political Cartoons, Twin Towers, 9/11

First edition of In the Shadow of Now Towers by Art Spiegelman.

Art Spiegelman (1948 - ) is an influential cartoonist, and an advocate of alternative comics and comics as a serious creative medium. He started out in the 1960s with the Topps bubblegum card company. In the 1980s, he and his wife Francoise Mouly edited Raw, a large-format comics and graphics magazine that introduced new cartoonists to a larger audience. In 1991, after thirteen years, he finished Maus, a book about his relationship with his father, a Holocaust survivor, which won a special Pulitzer Prize and earned greater respect for comics. They worked for The New Yorker for twenty years until he left after 9/11 to work on In The Shadow of No Towers.

THE SKY IS FALLING!

"I tend to be easily unhinged. Minor mishaps - a clogged drain, running late for an appointment - send me in a sky-is-falling tizzy. It's a trait that can leave on ill-equipped for coping with the sky when it actually falls. Before 9/11 my traumas were all more or less self-inflicted, but out-running the toxic cloud that had moments before been the north tower of the World Trade Center left me reeling on that faultline where World History and Personal History collide - the intersection my parents, Auschwitz survivors, had warned me about when they taught me to always keep my bags packed.

"It took a long time put the burning towers behind me. Personal history aside, zip codes seemed to have something to do with the intensity of response. Long after uptown New Yorkers resumed their daily jogging in Central Park, those of us living in Lower Manhattan found our neighborhood transformed into one of those suburban gated communities as we flashed IDs at the police barriers on 14th Street before being allowed to walk home. Only when I traveled to a university in the Midwest in early October, 2001 did I realize that *all* New Yorkers were out of their minds compared to those for whom the attack was an abstraction. The assault on the Pentagon confirmed that the carnage in New York City was indeed an attack on America, not one more skirmish on foreign soil. ..."

Spiegelman first published the book, which included cartoons from Maus and early 20th century cartoons, in Germany's Die Zeit following rejection by American publishers. It was also serialized in full in the London Review of Books. After its publication in the US it was included on the New York Times list of 100 Notable Books of 2004.