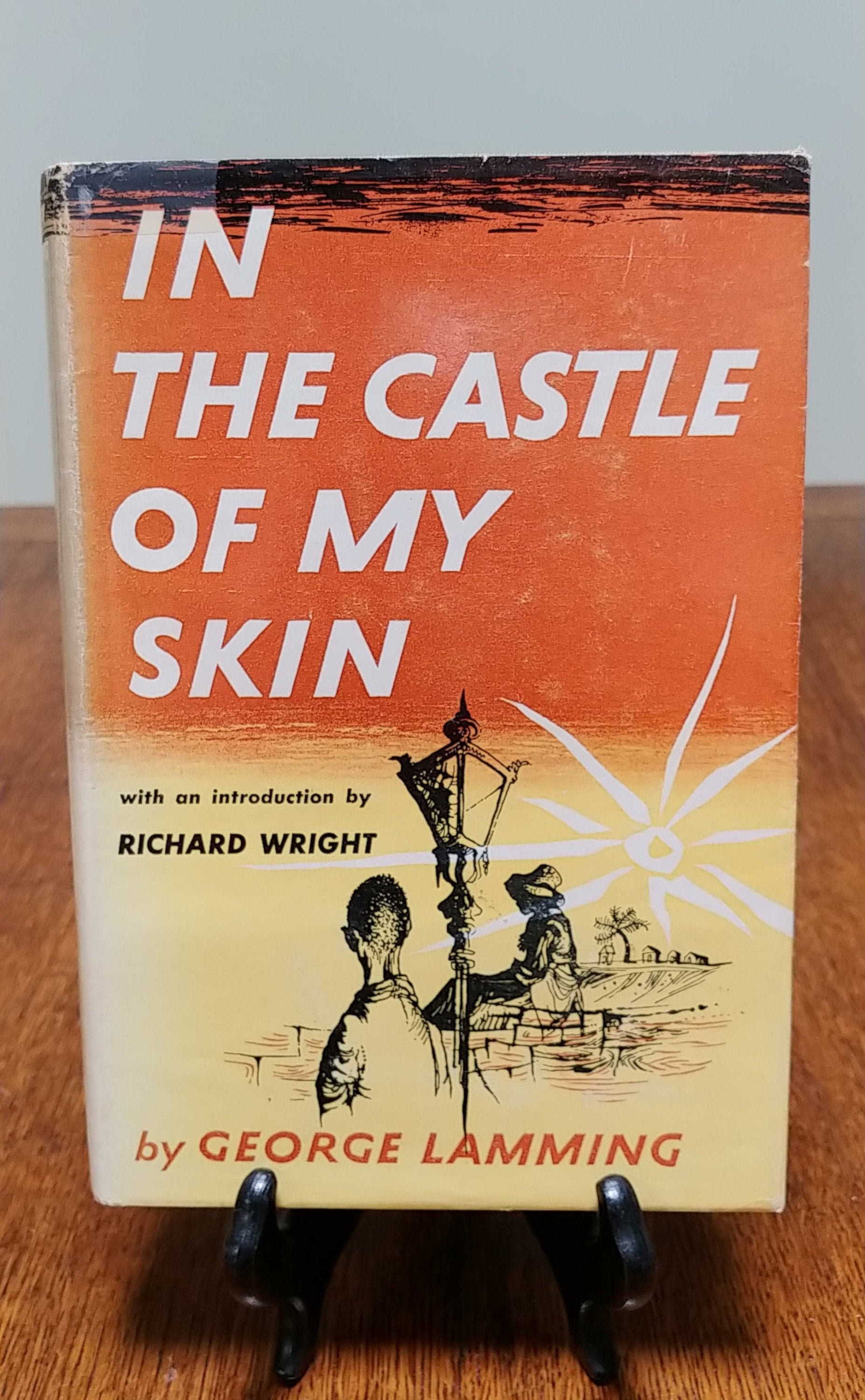 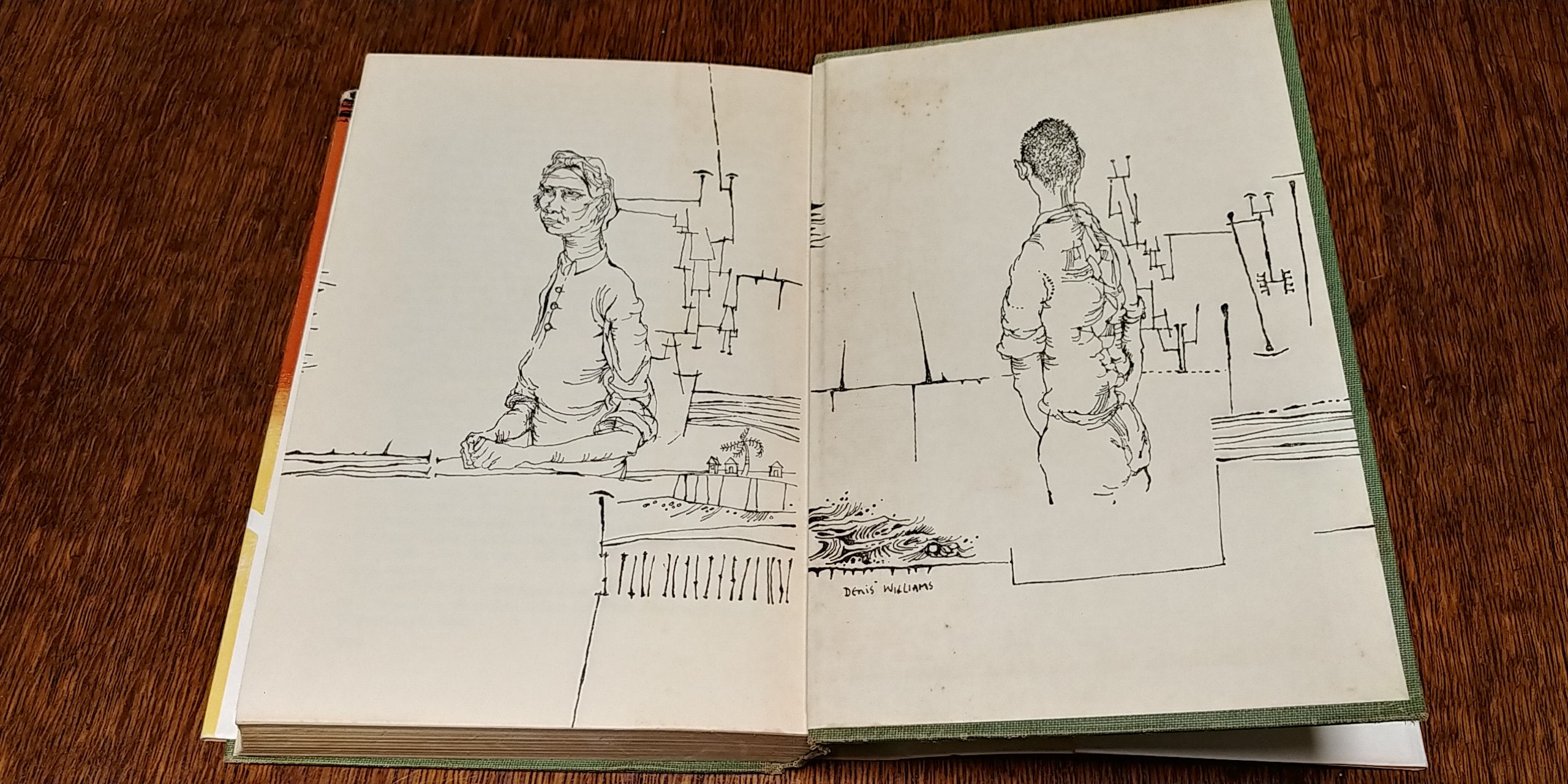 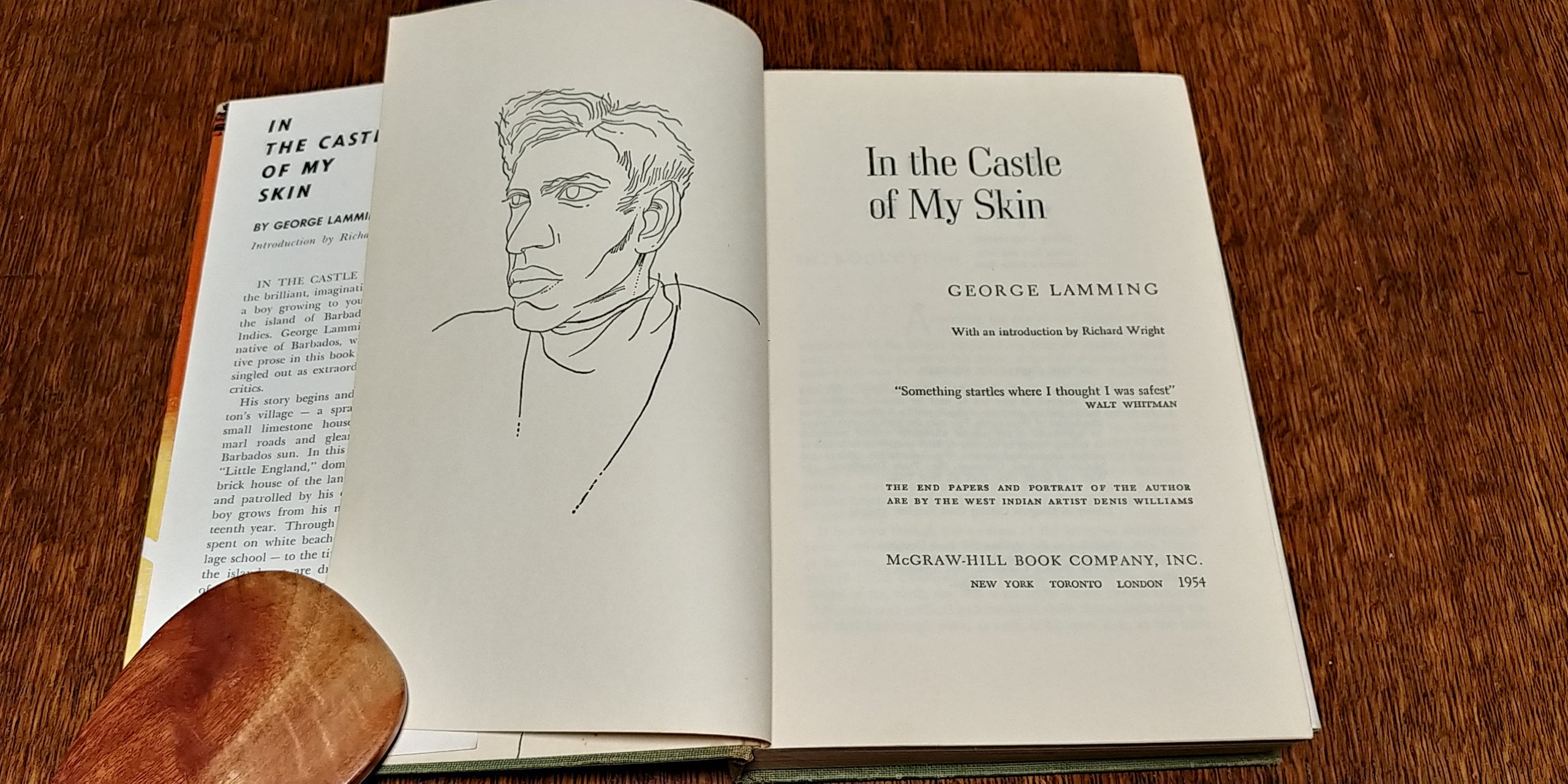 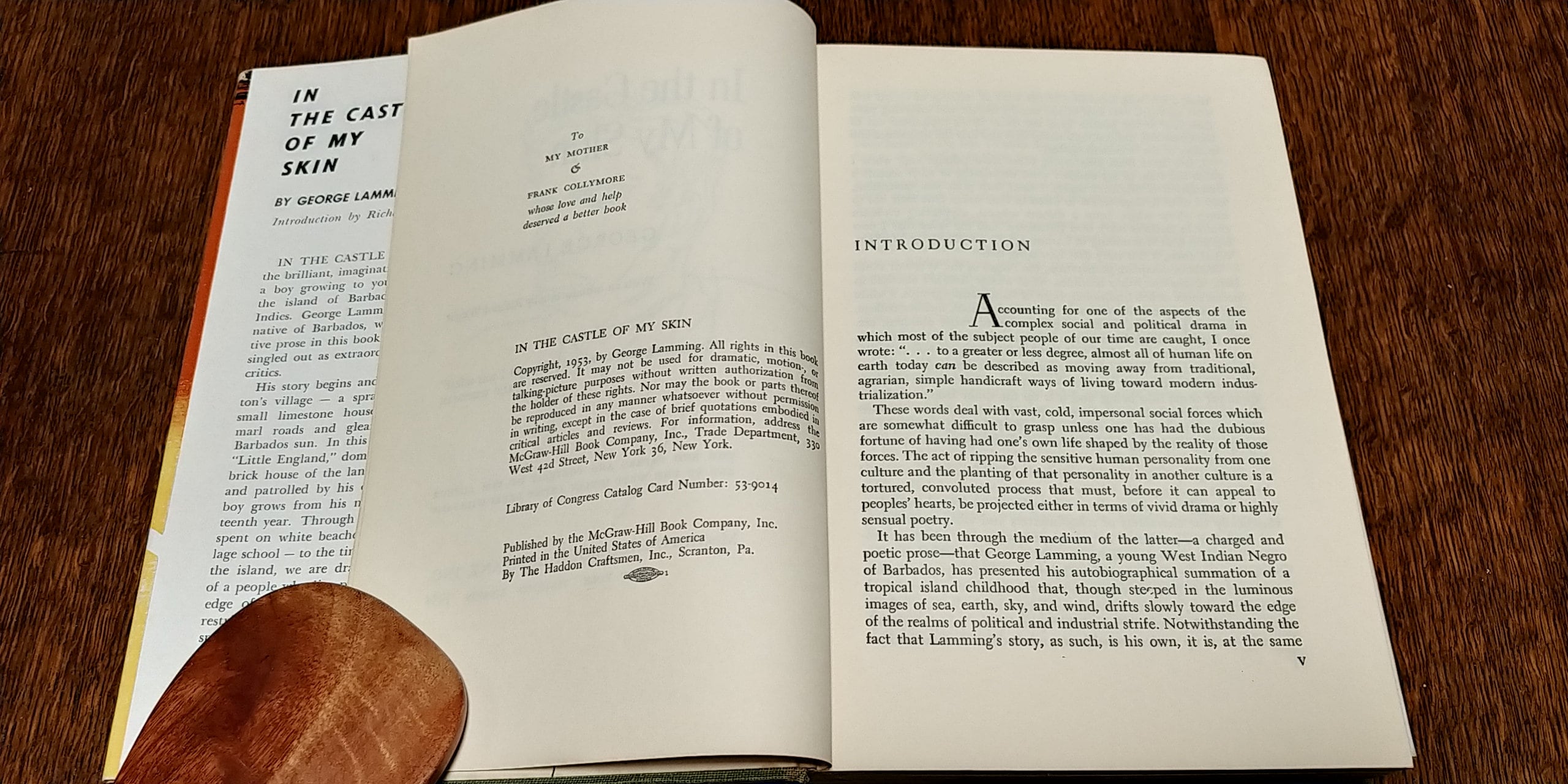 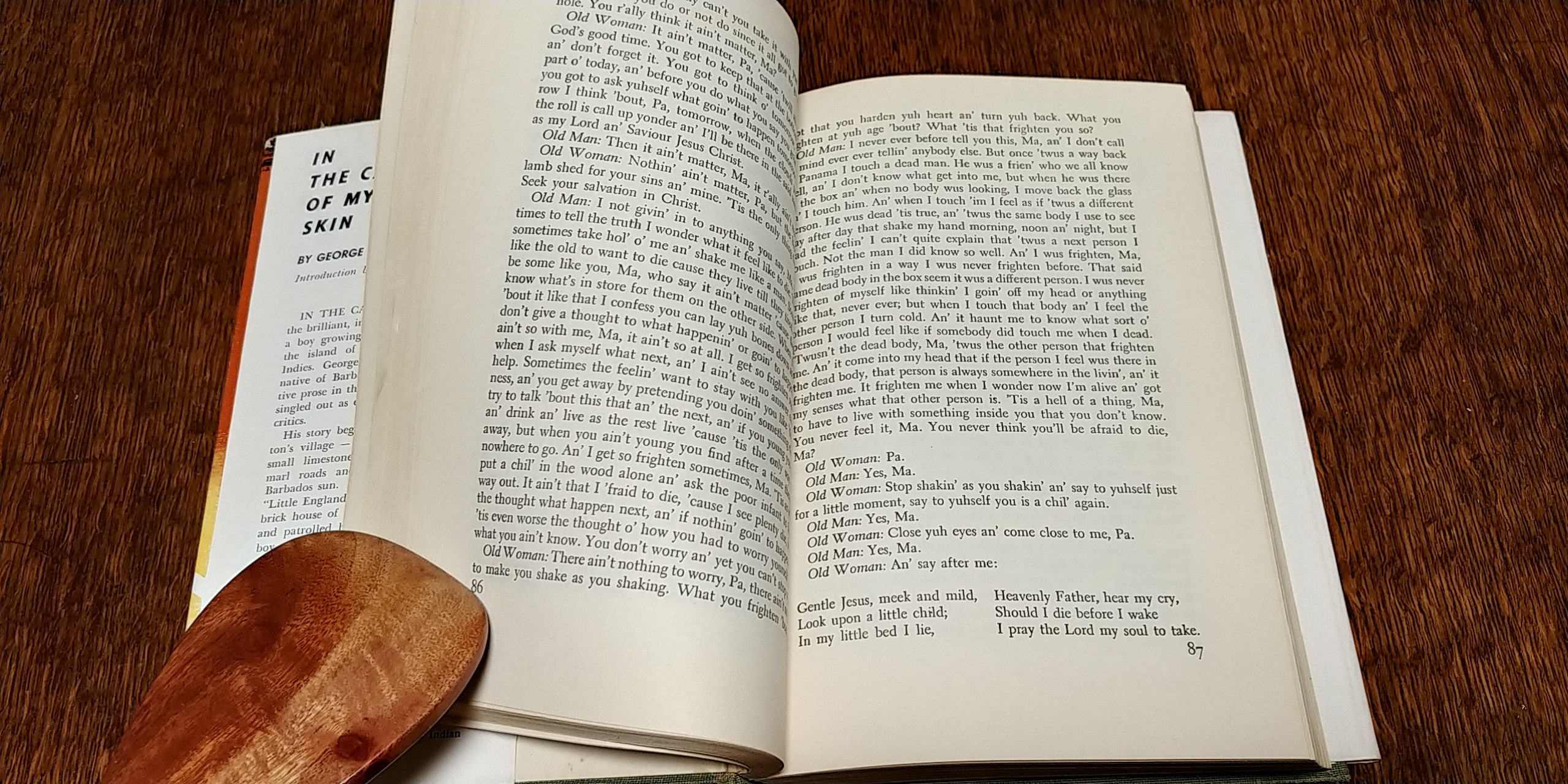 Early US edition of In The Castle of My Skin by George Lamming with an introduction by Richard Wright.

George Lamming (1927 - ), a native of Barbados, is a novelist, essayist, and poet, and a force in Caribbean literature. In The Castle of My Skin was his first novel and won a Sommerset Maugham Award. A Guggenheim Fellowship allowed him to write full time. He next wrote The Emigrants, followed by Of Age and Innocence, Season of Adventure, Water with Berries, and Natives of my Person. His body of work also includes five books of non-fiction, short stories, and essays.

"In The Castle of My Skin is the brilliant, imaginative self-portrait of a boy growing to young manhood on the island of Barbados in the West Indies. ... His story begins and ends in Creighton's village - a sprawling mosaic of small limestone houses heaped along marl roads and gleaming under the Barbados sun. In this remote corner of "Little England", dominated by the big brick house of the landlord on the hill and patrolled by his overseers, a small boy grows from his ninth to his eighteenth year. Through childhood - days spent on white beaches and in the village school - to the time when he leaves the island, we are drawn into the life of a people who live precariously on the edge of two worlds: the old with its restrictions, its simple joys, and its respect for authority, the new with its new emerging social consciousness. Changes comes to the village, bringing with it fear and misunderstanding and, for the boy, the realization that his island home is no longer his castle. His castle is in his skin and his skin is both his pride and his prison."

"Rain, rain, rain...my mother put her head through the window to let the neighbour know that I was nine, and thy flattered me with the consolation that my birthday had brought showers of blessing. The morning laden with cloud soon passed into noon, and the noon neutral and silent into the sodden grimness of an evening that waded through water. That evening I kept an eye on the crevices of our wasted roof where the colour of the shingles had turned to mourning black, and waited for the weather to rehearse my wishes. But the evening settled on the slush of the roads that dissolved in parts into pools of clay, and I wept for the watery waste of my ninth important day. Yet I was wrong, my mother protested: it was irreverent to disapprove the will of the Lord or reject the consolation that my birthday had brought showers of blessing.",

Condition*: Good/Good. Dust jacket: Sunned along the spine with the shadow of a label near the tale (no adhesive); taped repair of two small tears at the head of the spine; small pink smudge on the back. Mottled fading of the green cloth cover boards and minor edge wear. Slight foxing of a small area on the back endpaper.

EDITION NOTES: There is confusion over first edition issue points for the first US edition of Lamming's first book. It was originally published in the UK in 1953 by Michael Joseph, London. McGraw-Hill published the US edition in 1954 with a different dust jacket, illustrations by Denis Williams, and an Introduction by Richard Wright. But we don't know the issue points for a first edition, first printing vs subsequent printings vs the book club edition, assuming there was one. So, I've priced this excellent book based on prevailing pricing for later printings and "Good" (as opposed to "Fine" or "Very Good") condition.