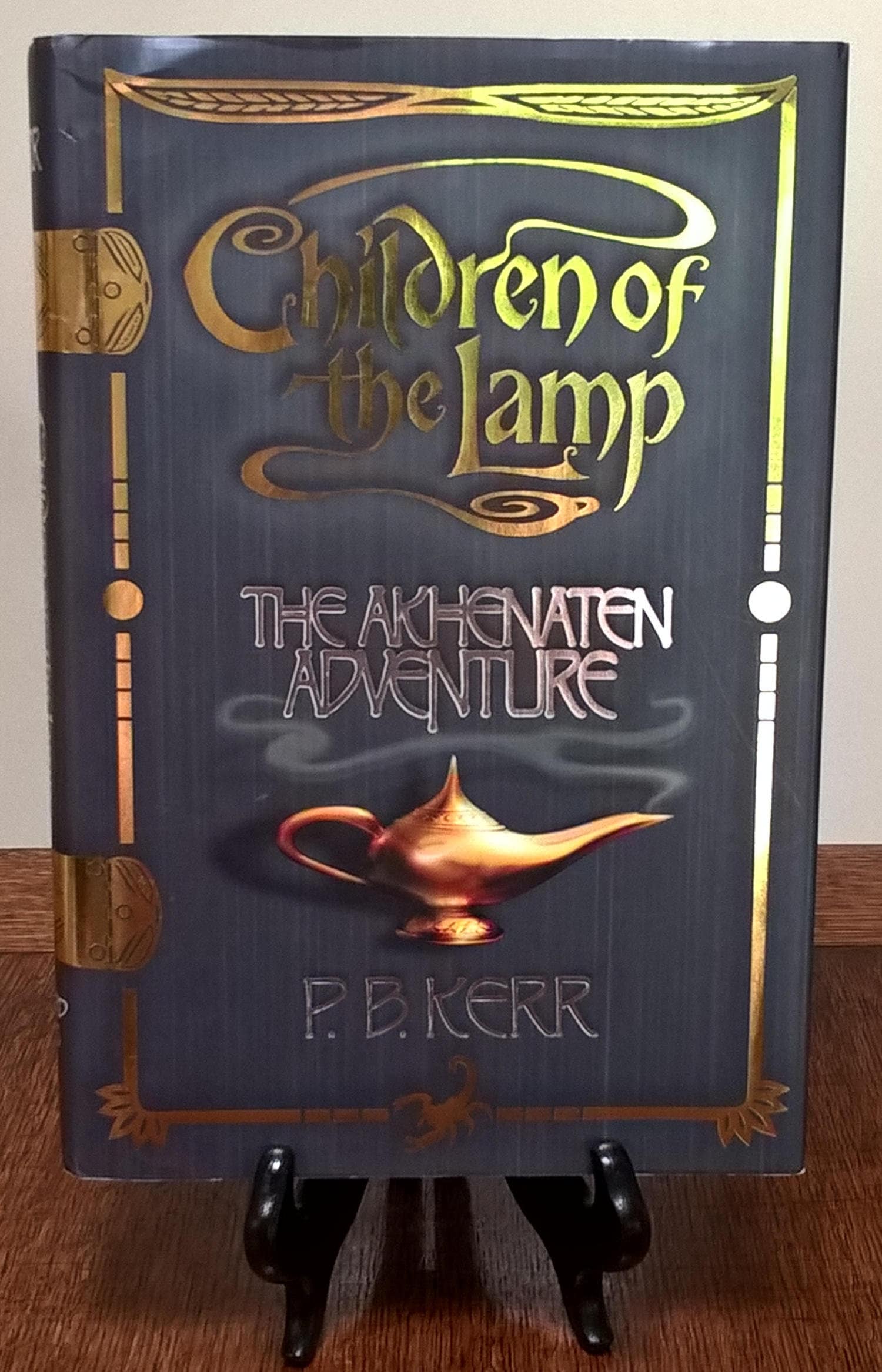 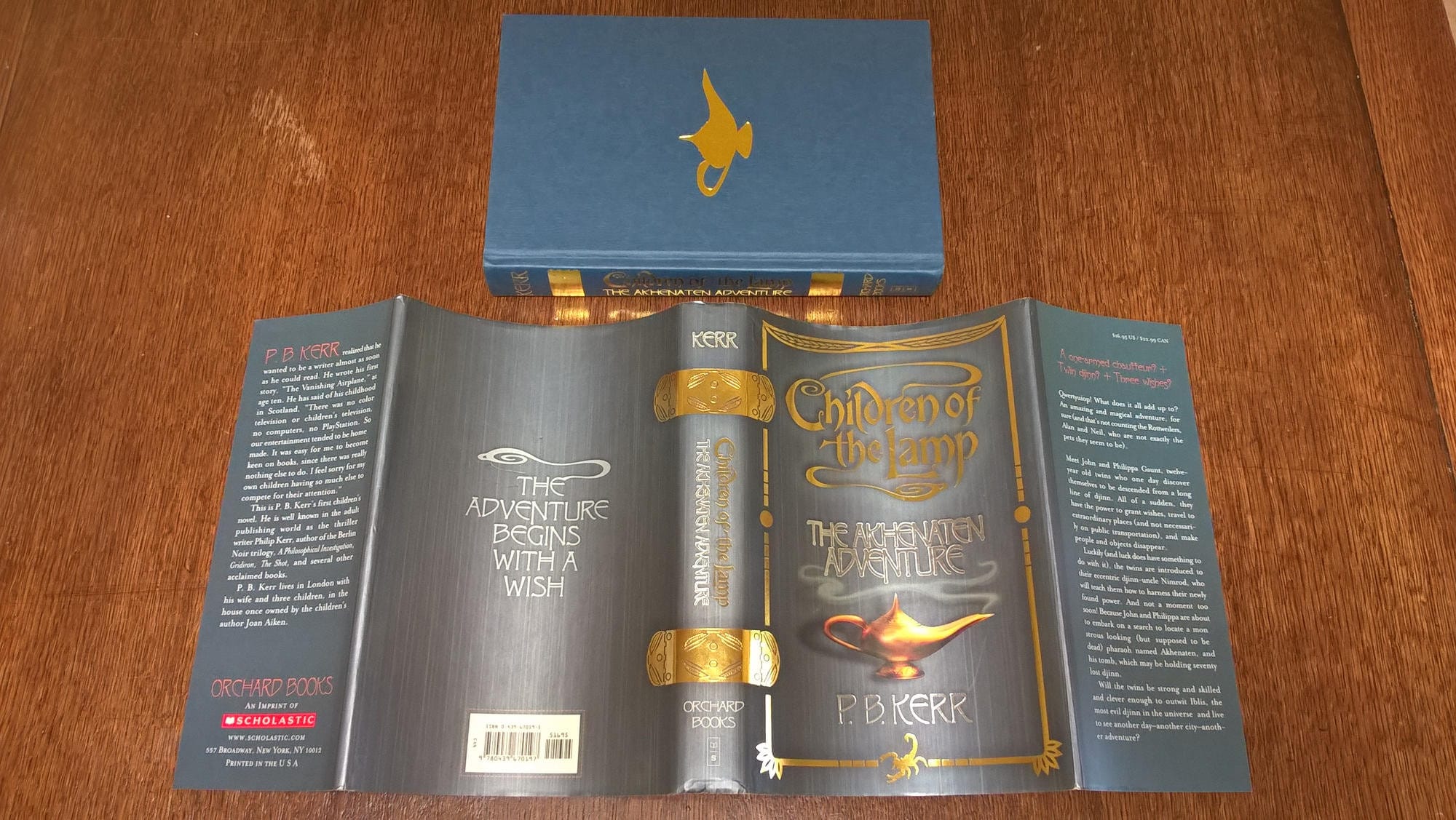 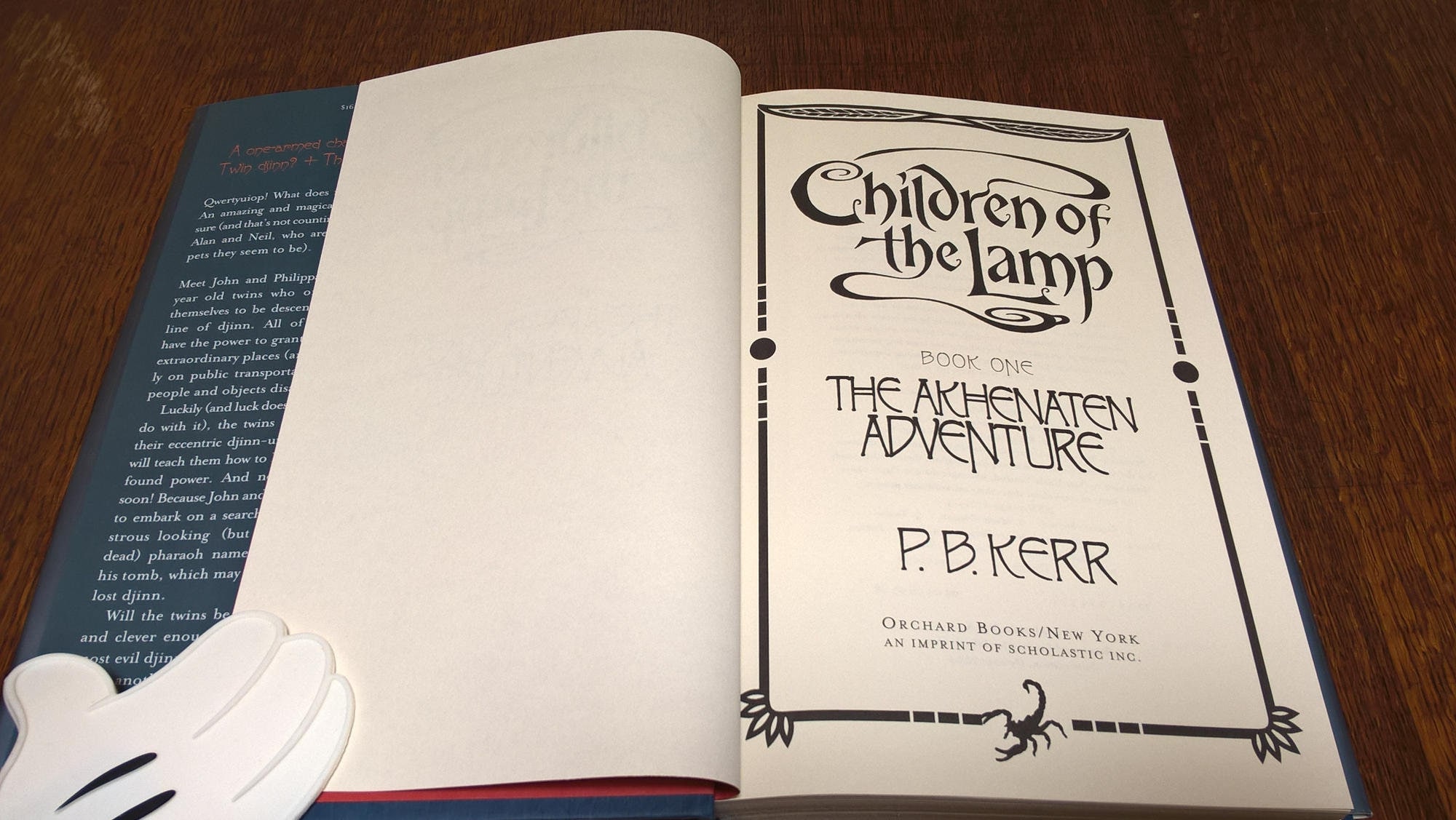 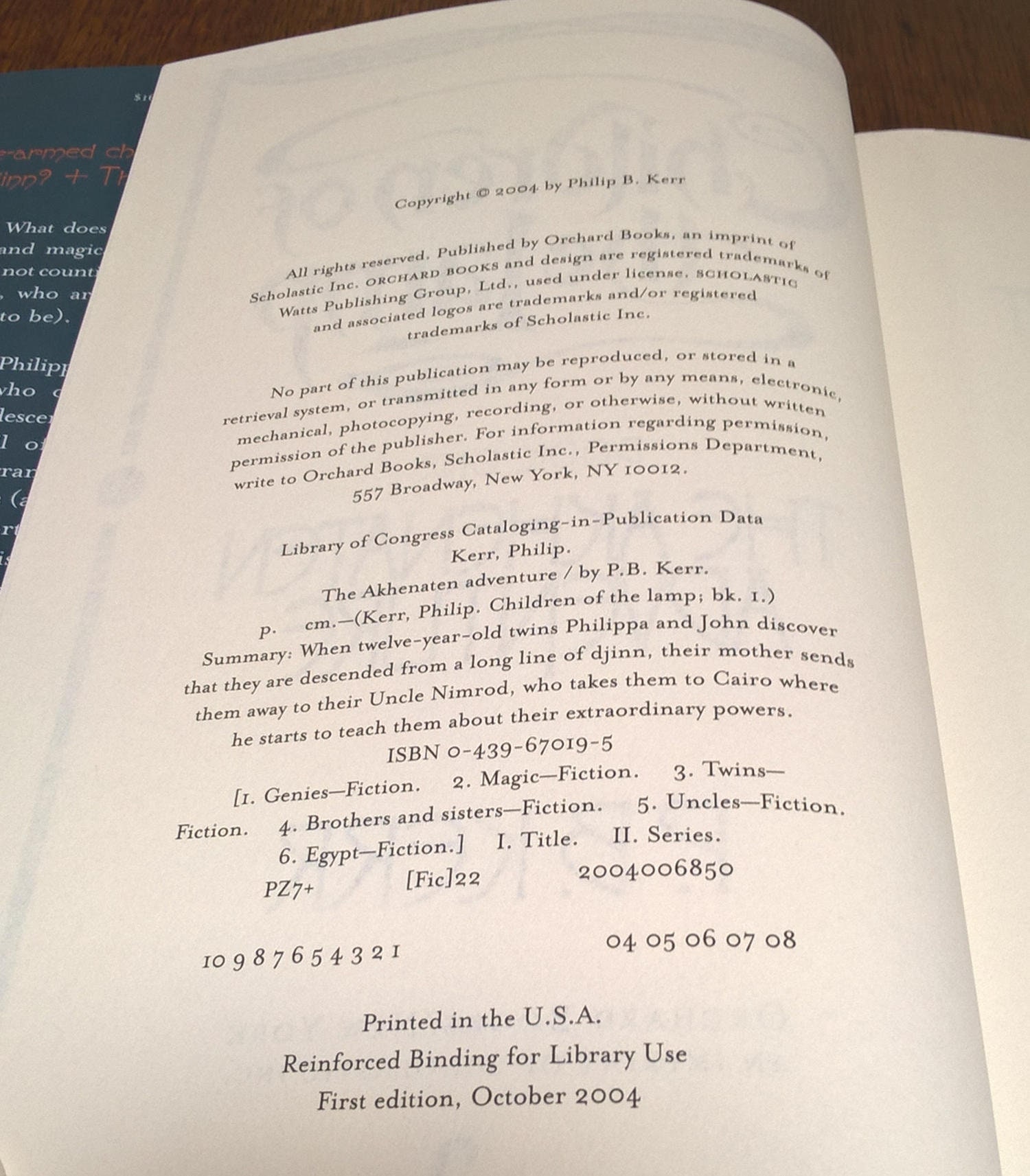 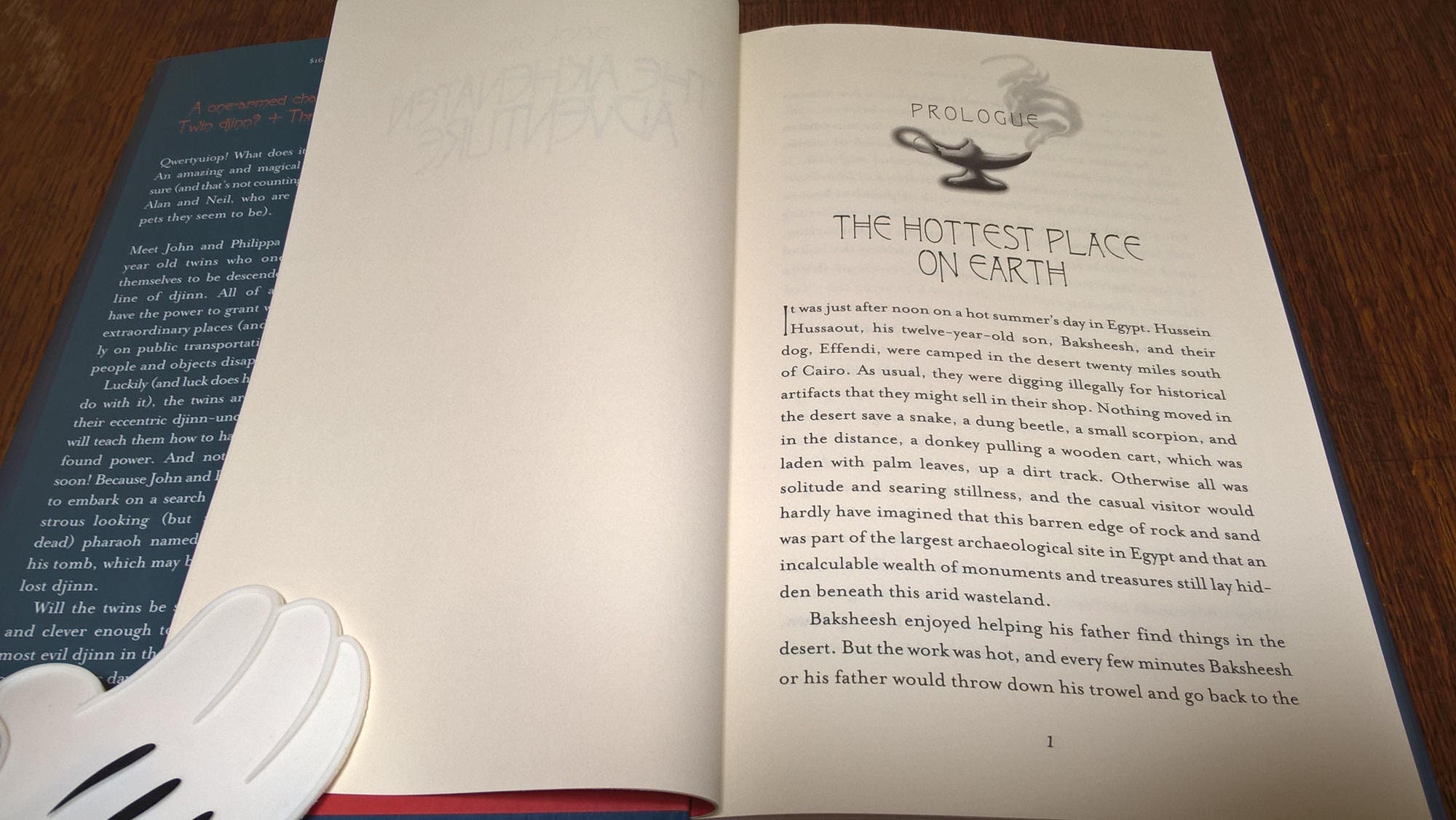 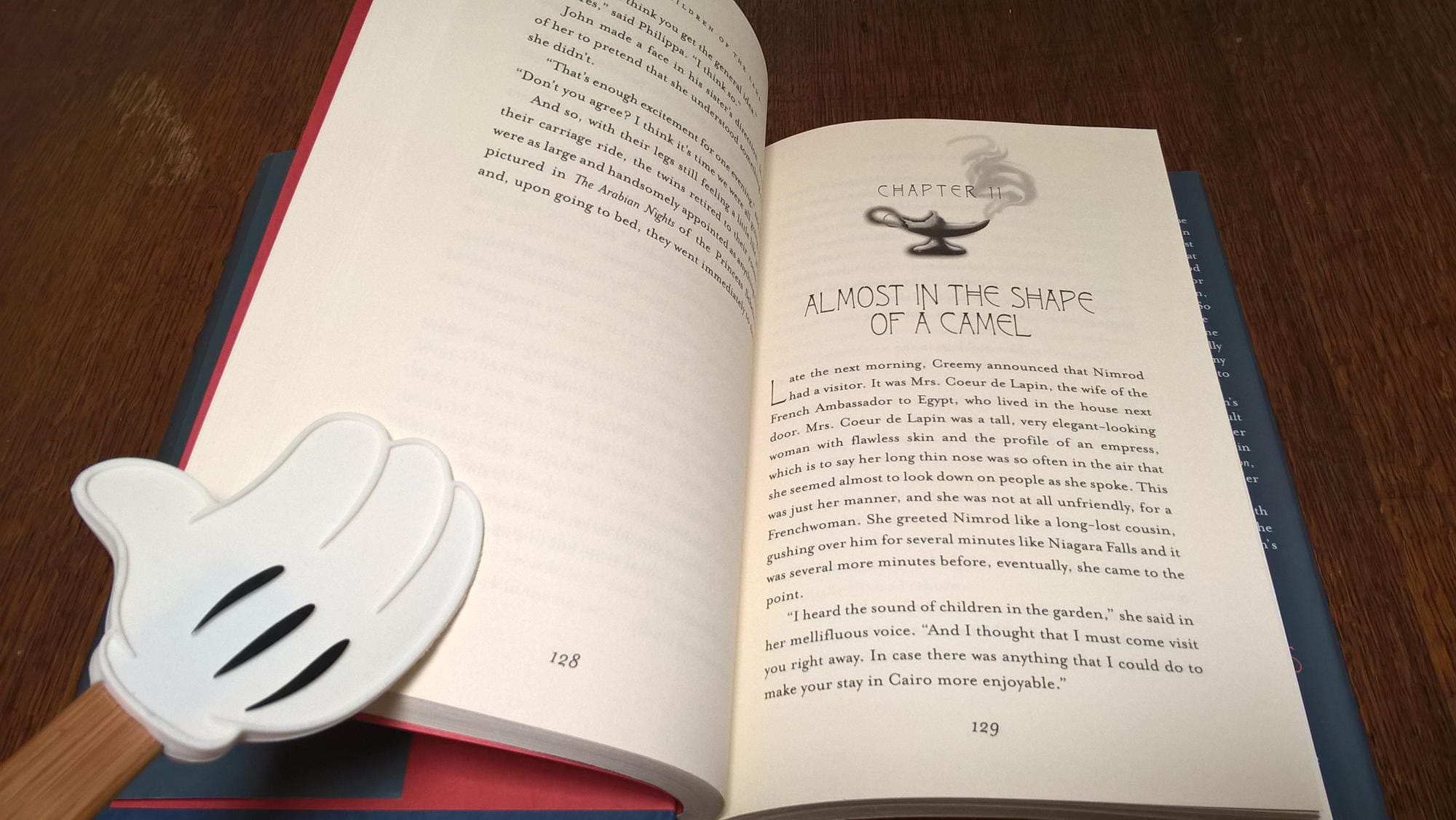 First edition of Children of the Lamp: The Akhenaten Adventure by P.B Kerr. John and Philippa discover they're descended from djinn and set off on a grand adventure.

The Akhenaten Adventure is the first book in the Children of the Lamp series.

"It was just after noon on a hot summer's day in Egypt. Hussein Hussaout, his twelve-year-old son, Baksheesh, and their dog, Effendi, were camped in the desert twenty miles south of Cairo. As usual, they were digging illegally for historical artifacts that they might sell in their shop. Nothing moved in the desert save a snake, a dung beetle, a small scorpion, and in the distance, a donkey pulling a wooden cart, which was laden with palm leaves, up a dirt track. Otherwise all was solitude and searing stillness, and the casual visitor would hardly have imagined that this barren edge of rock and sand was part of the largest archaeological site in Egypt and that an incalculable wealth of monuments and treasures still lay hidden beneath this arid wasteland. ..."

CHAPTER 1 - THE NAMING OF DOGS

"Mr. and Mrs. Edward Gaunt lived in New York at Number 7, East 77th Street, in an old townhouse with seven floors. They had two children, John and Philippa, who despite being twelve-year-old twins, were the least identical twins imaginable (which was much to their own relief and satisfaction). People found it hard to believe that they could be twins at all, they were so different. John, who was older by ten minutes, was tall and thin with straight brown hair and liked to wear black. Philippa was smaller with wavy red hair and horn-rimmed glasses that made her look like the more intelligent of the two; she liked to wear pink. They both felt a little sorry for identical twins and believed that they had had a lucky escape, although it could be annoying when people remarked on how they didn't look alike, as if no one had ever noticed that before.

Inside their heads, however, it was a very different story. John and Philippa often thought very similar thoughts. ..."

When they discover they're descended from djinn, or genies, and meet their Uncle Nimrod, the two stories converge into a grand adventure.

P. B. Kerr is Philip Kerr, author of well-received adult thrillers. This is his first children's book.

The other books in the Children of the Lamp series: