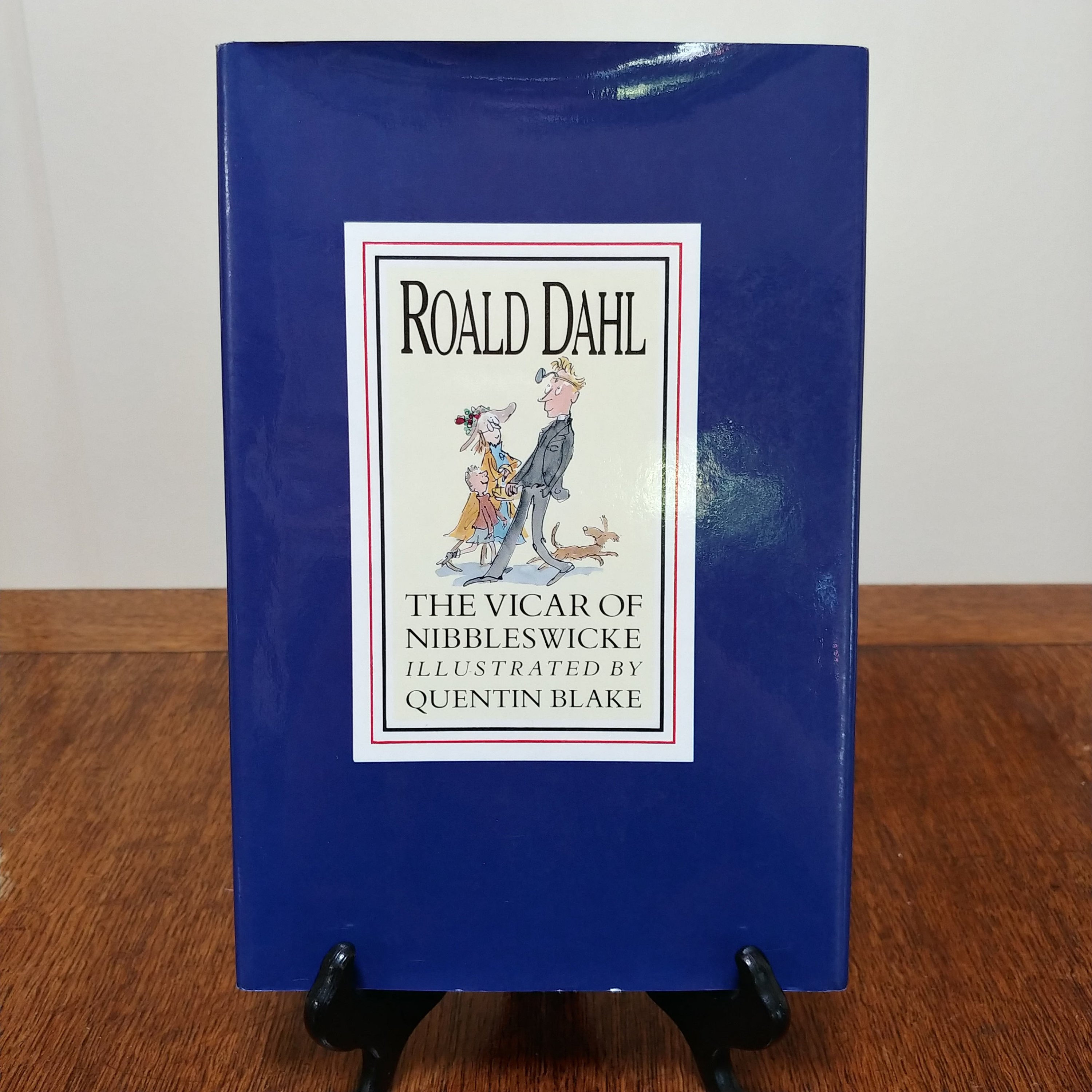 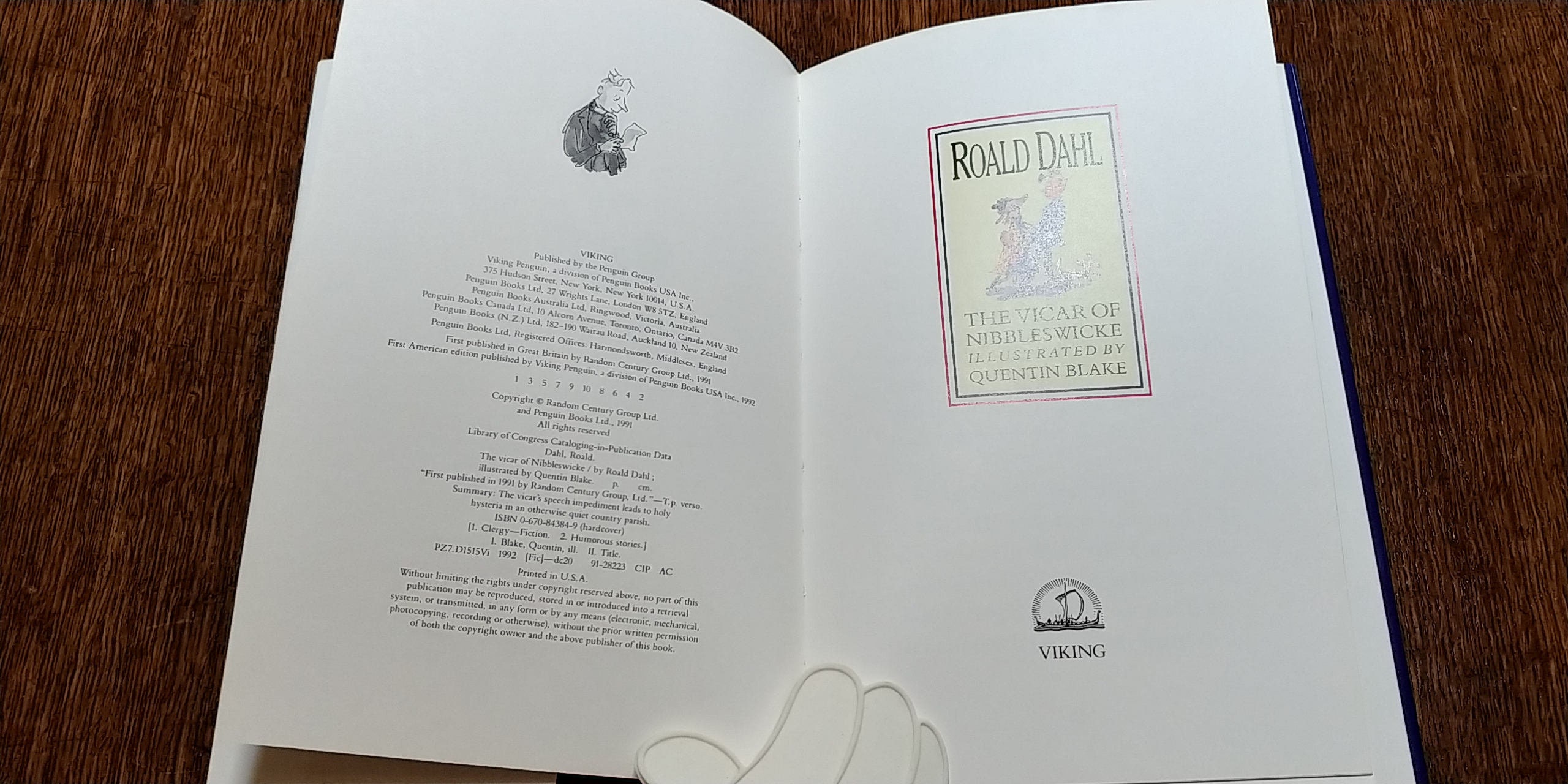 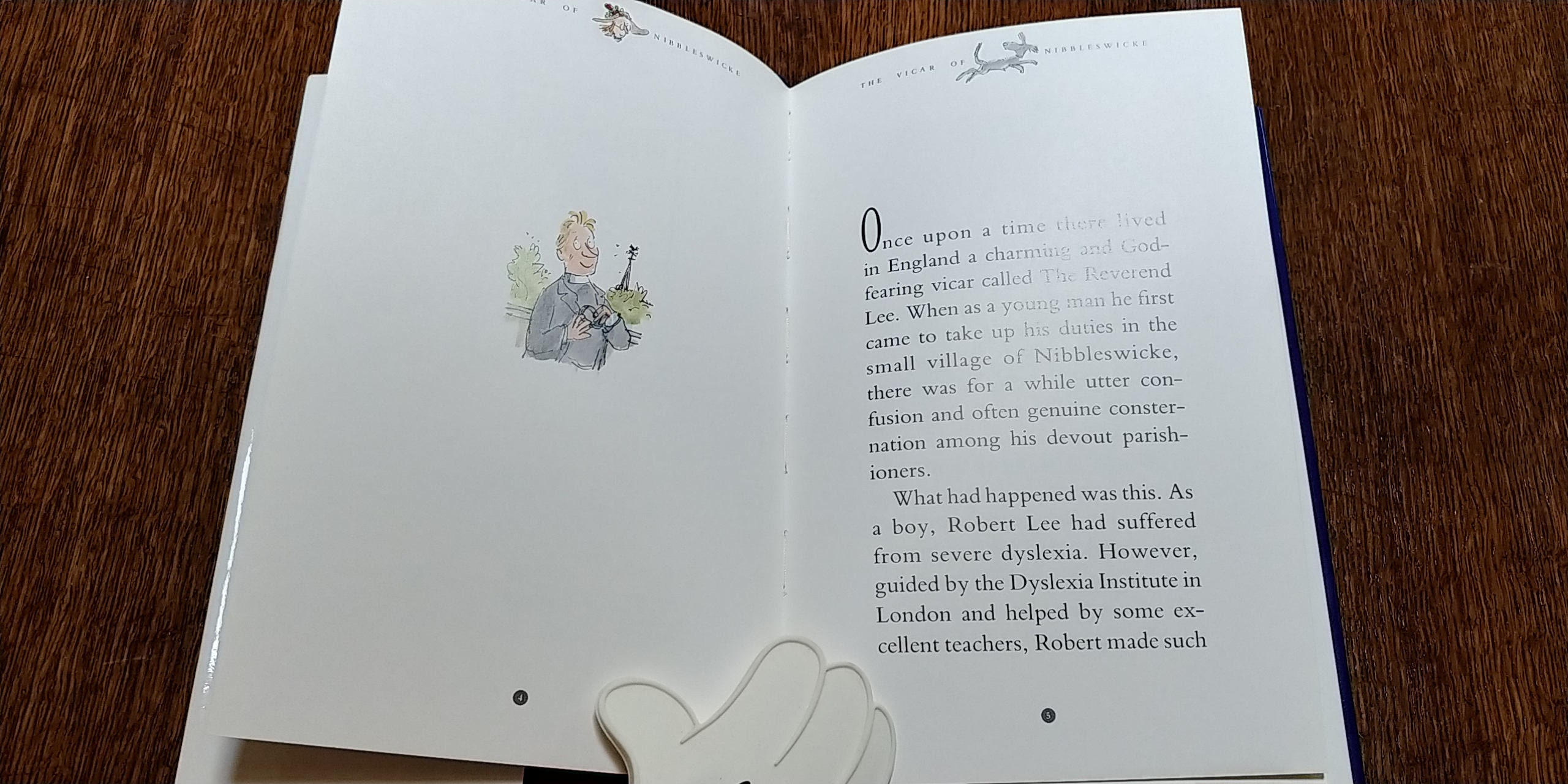 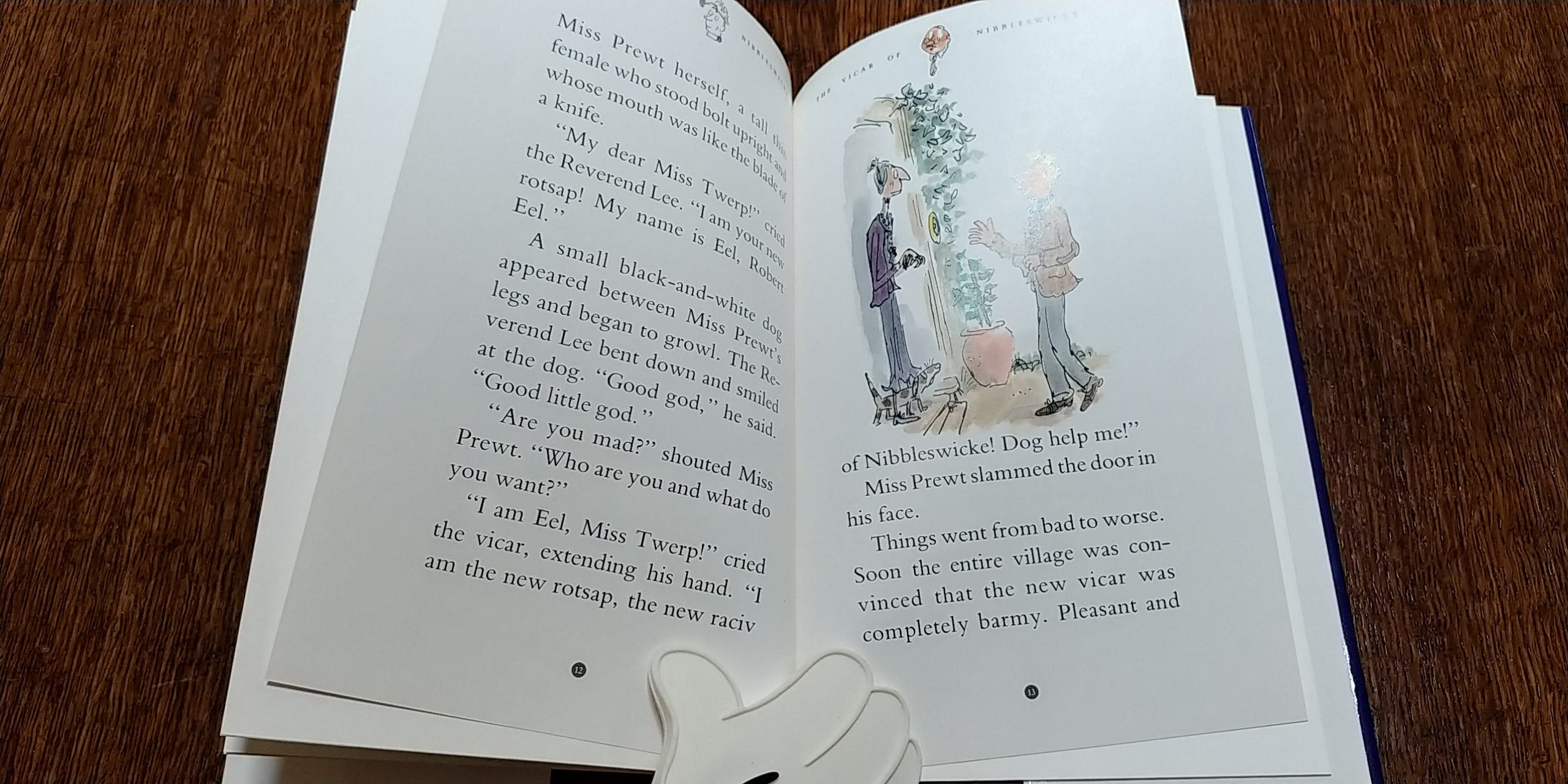 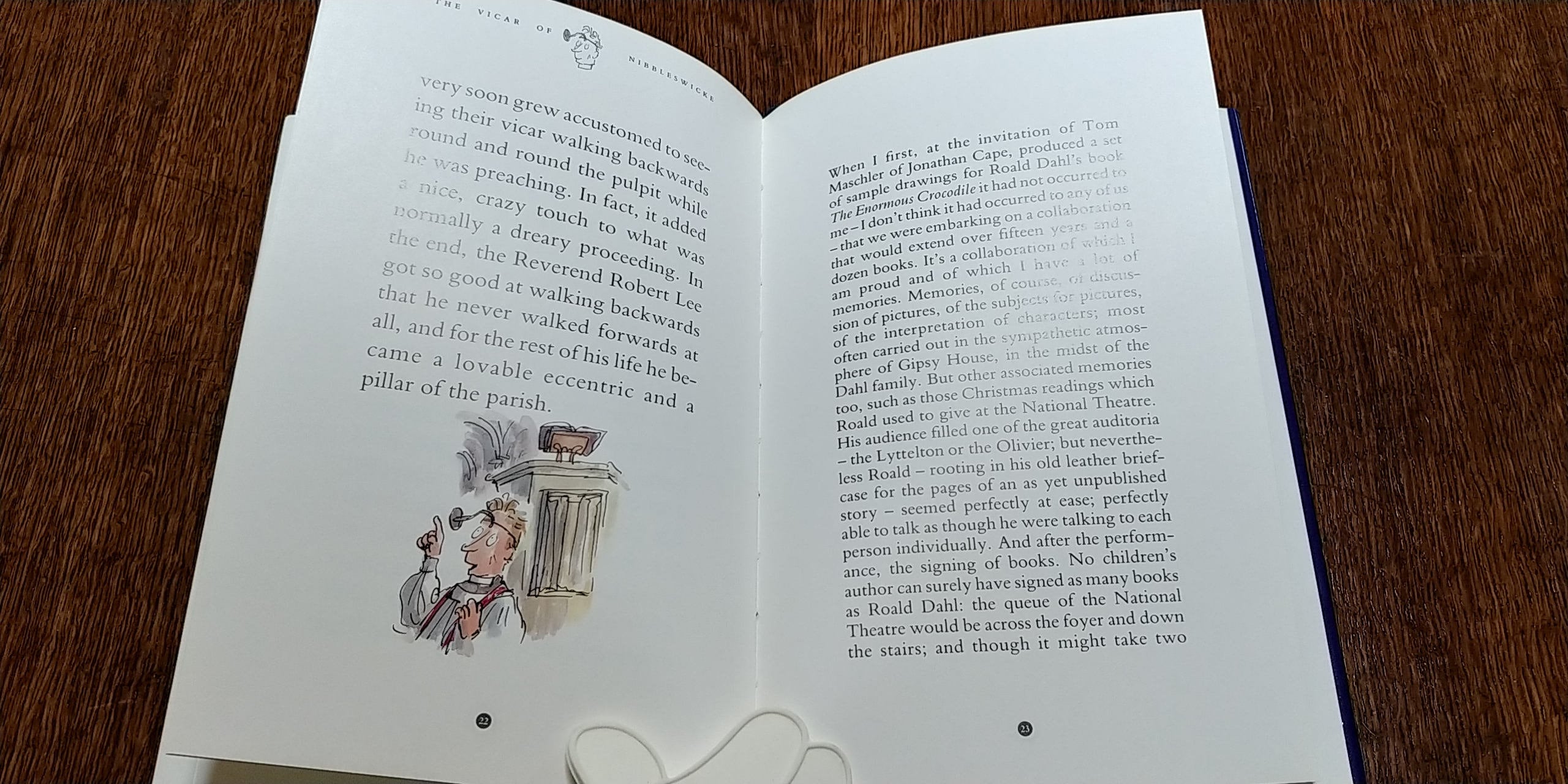 First edition of The Vicar of Nibbleswicke by Roald Dahl and illustrated by Quentin Blake, a charming story about imperfection and acceptance written for the benefit of the Dyslexia Institute of London.

Author Janelle Brown, writing for the Los Angeles Review of Books, captures what I also enjoy about Roald Dahl: "...Dahl tapped into my own secret desires, even if I couldn’t express them myself."

"Once upon a time there lived in England a charming and God-fearing vicar called The Reverend Lee. When as a young man he first came to take up his duties in the small village of Nibbleswicke, there was for a while utter confusion and often genuine consternation among his devout parishioners.

What happened was this. As a boy, Robert Lee had suffered from severe dyslexia. ..."

In this charming and funny story, the Reverend Robert Lee's triumph over childhood dyslexia, with the help and encouragement of the Dyslexia Society of London and his teachers, enables him to achieve his goal of becoming a minister. But during his first night at his first post, the Vicarage of Nibbleswicke, a severe bout of nerves triggers a comical case of dyslexia in reverse. (Dahl and Blake donated their proceeds from the book to the Dyslexia Society for the life of the copyright.)

"Oh dear, thought poor Robert Lee as he lay in bed that night trying to sleep. Will I really be able to cope with this job? Weddings, funerals, christenings, Sunday Schools, the organist, the verger, the church committee, the choir, the bell-ringers and above all the dreaded sermons ... His mind whirled. He began to sweat. And it is clear that sometime during that horrible night something must have gone click in his brain..."

The next morning, the Reverend Lee faces a whole new, and comical, challenge: he begins speaking one word out of every sentence backwards. As when he pays a visit to the parish's wealthiest patron.

"My dear Miss Twerp!" cried the Reverend Lee. "I am your new rootsap! My name is Eel, Robert Eel."

This does not go over well with Mrs. Prewt, and parishioners are increasingly alarmed. But he is otherwise so kind and endearing they are willing to forgive him this one "eccentricity". But the local doctor diagnoses the problem - Back-to-Front Dyslexia - and provides a cure: walk backwards while talking. It works! The Reverend Lee fashions a rear view mirror to be worn on his head to avoid walking into things, and masters walking backwards. His congregation adapts and eventually accepts it as a "nice, crazy touch to what was normally a dreary proceeding".

Roald Dahl (1919 - 1990) was appreciated, or rejected, or banned outright, for writing enormously creative children's stories in which the children prevail over great challenges and/or despicable adults, and the goodness of children triumphs over evil.

Roald Dahl also wrote Charlie and the Chocolate Factory, Matilda, The BFG, The Witches, The Twits, The Fantastic Mr. Fox, and more.

The Charmed Bookshop has a first edition of James and The Giant Peach.

Quentin Blake (1932 - ) was Britain's first Children's Laureate and is best known as the illustrator of fifteen Roald Dahl books.

The Charmed Bookshop has a first UK edition of Quentin Blake's The Seven Voyages of Sinbad the Sailor.