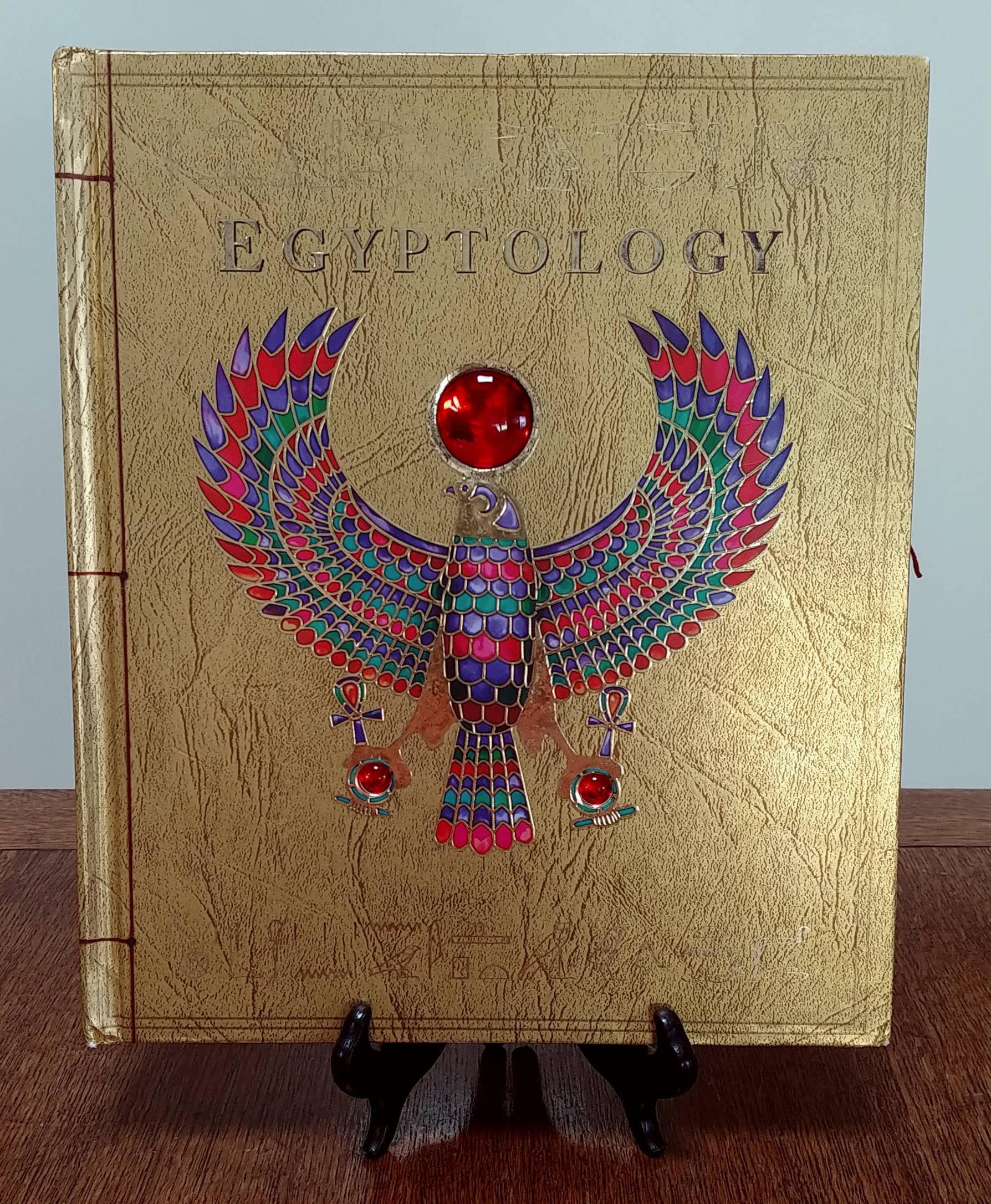 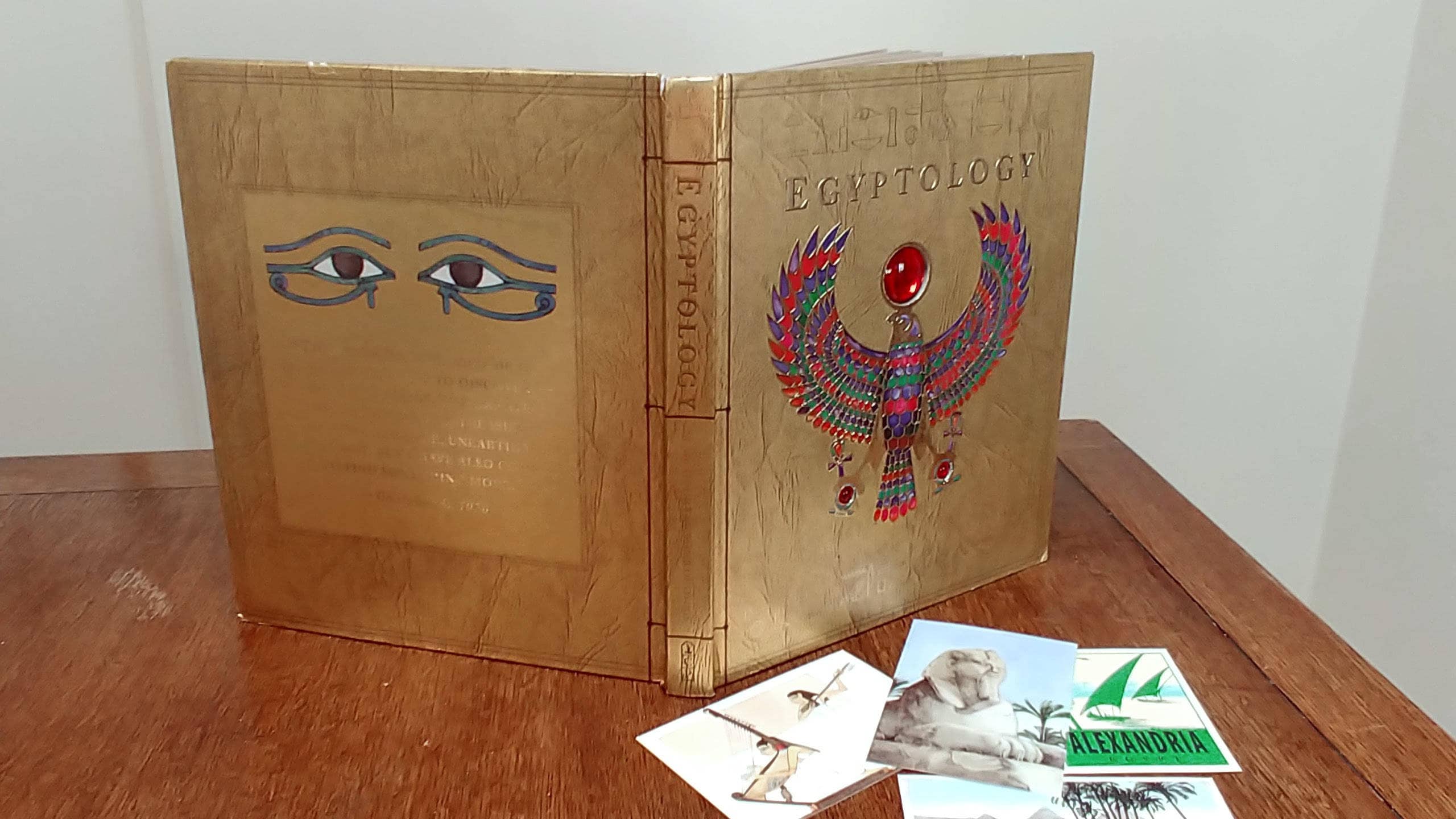 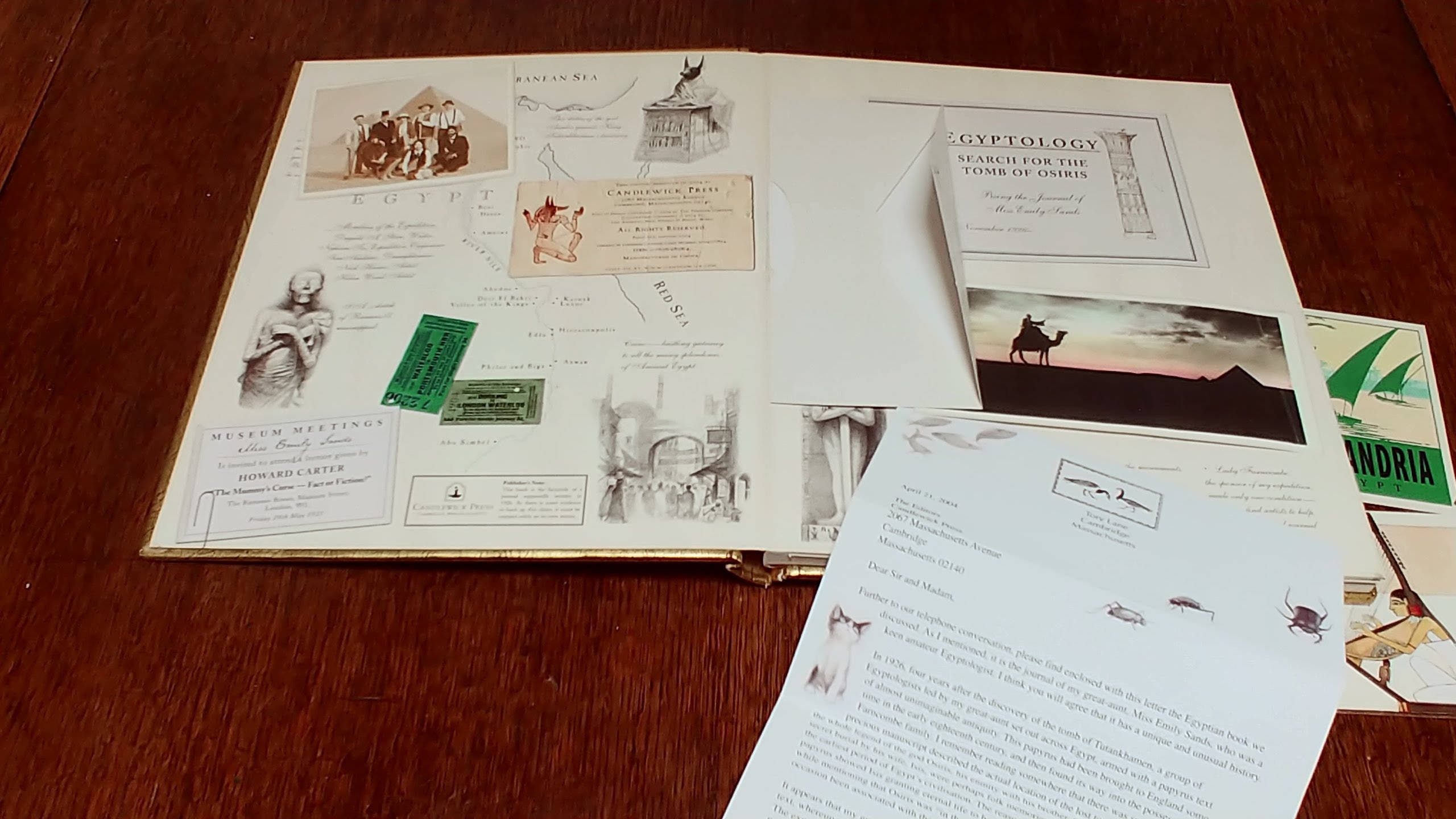 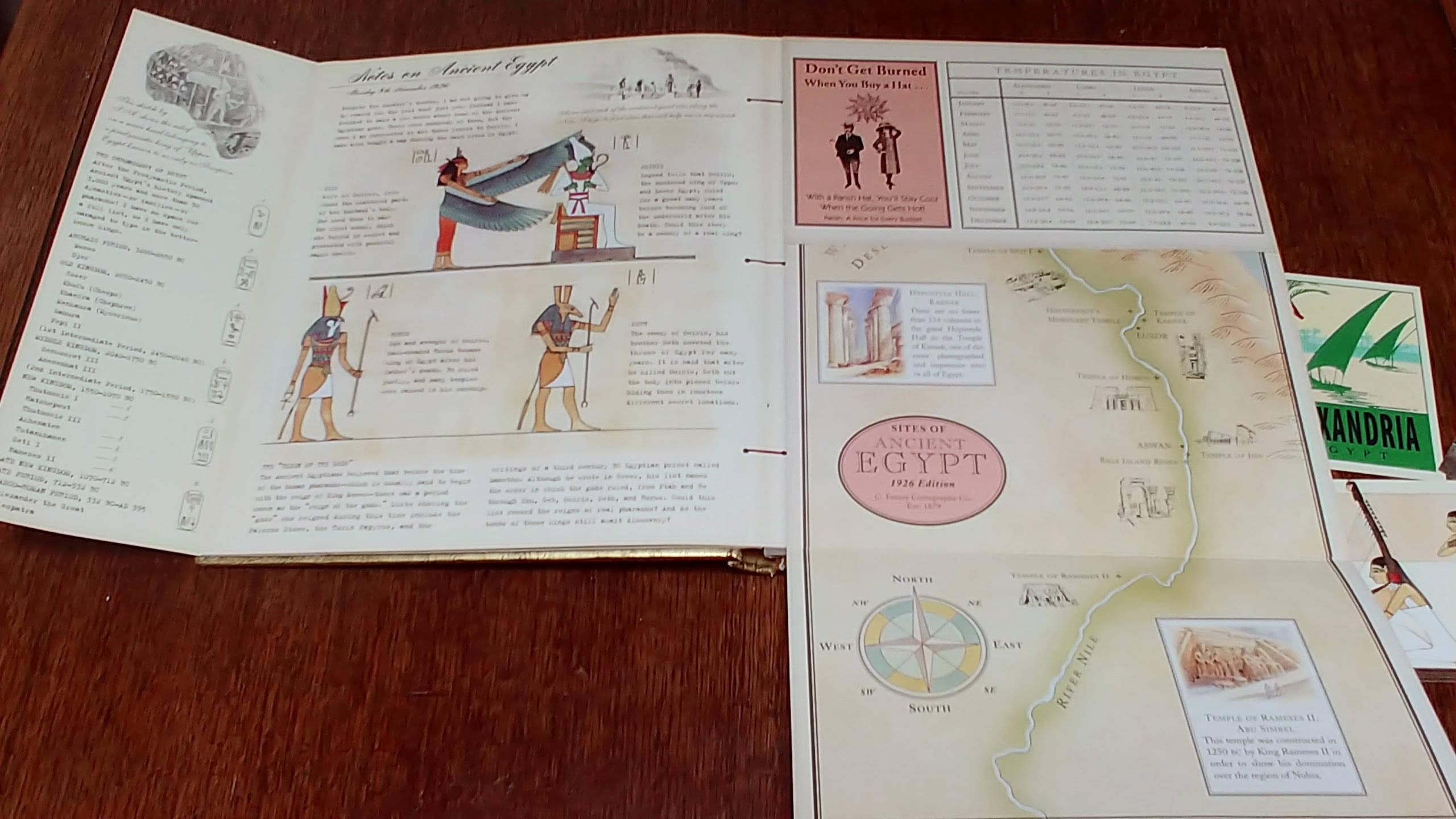 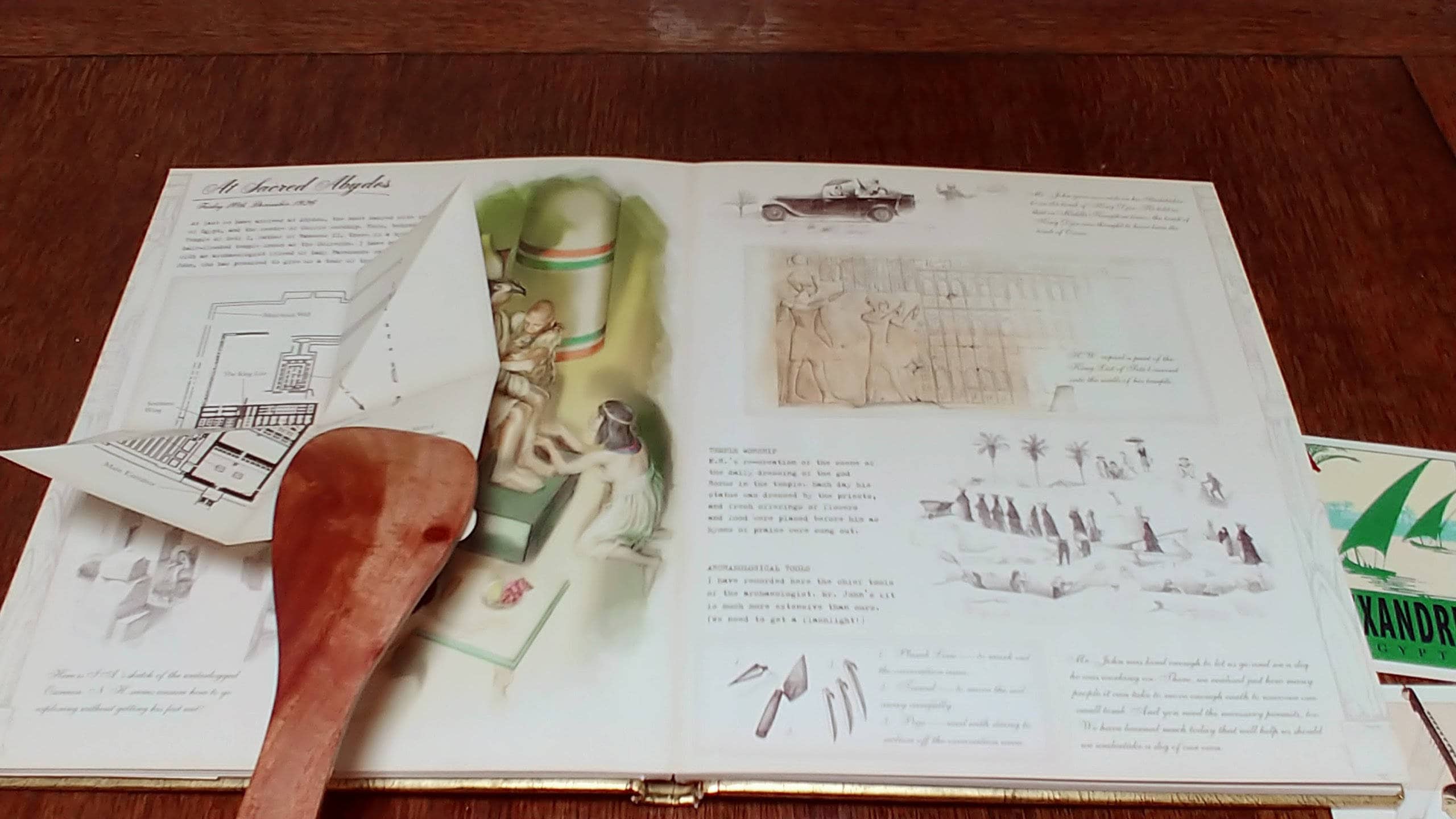 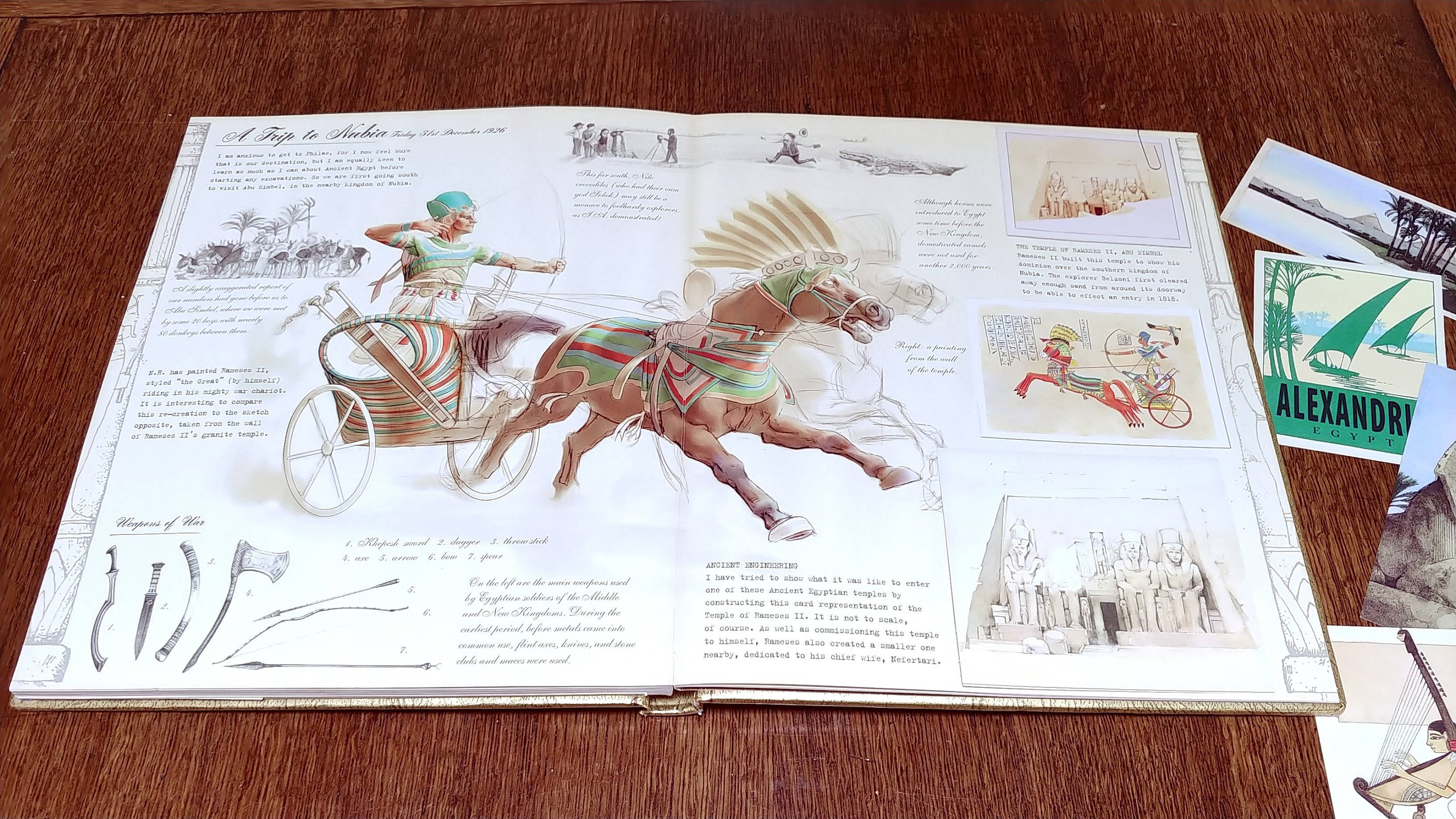 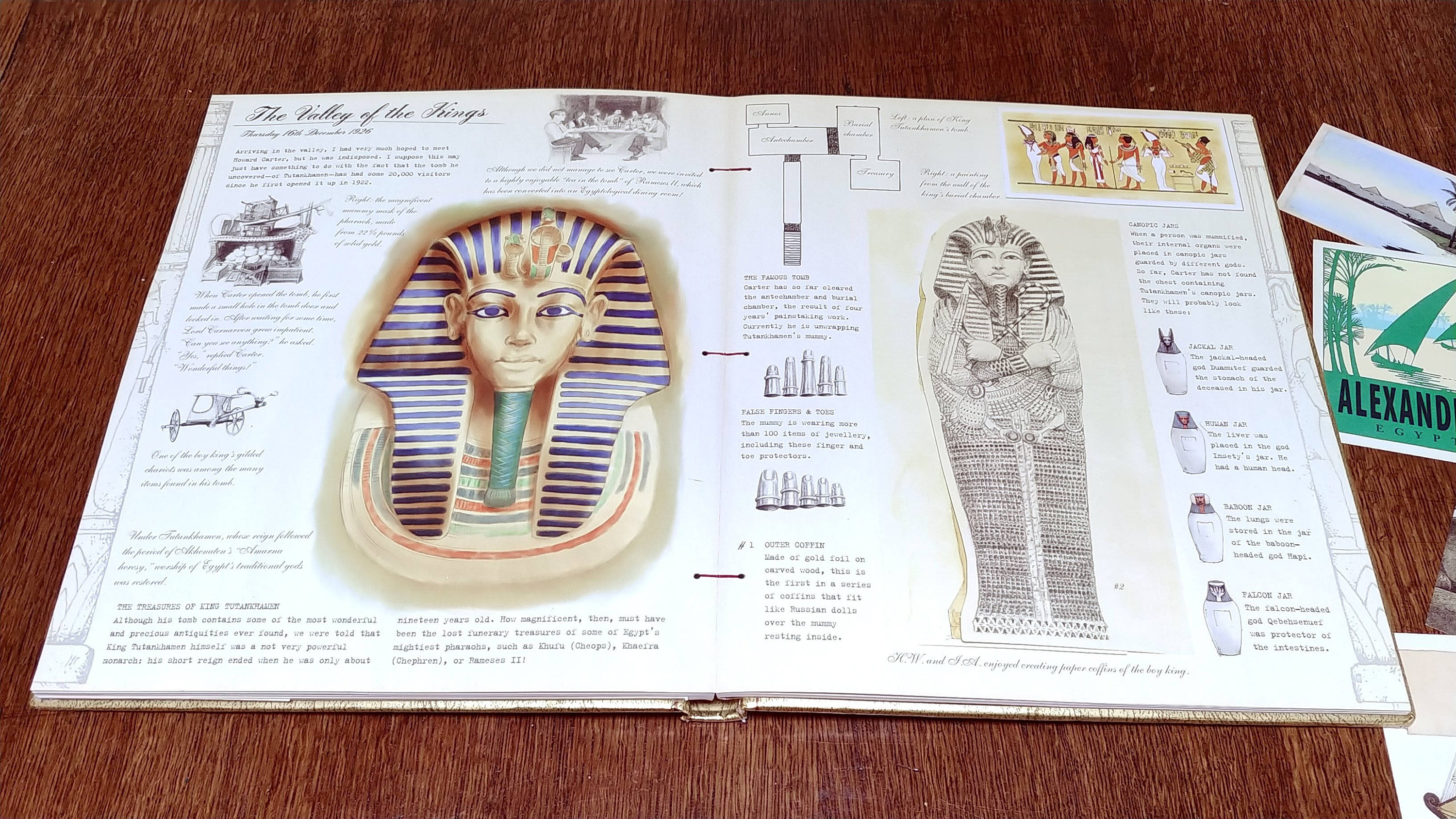 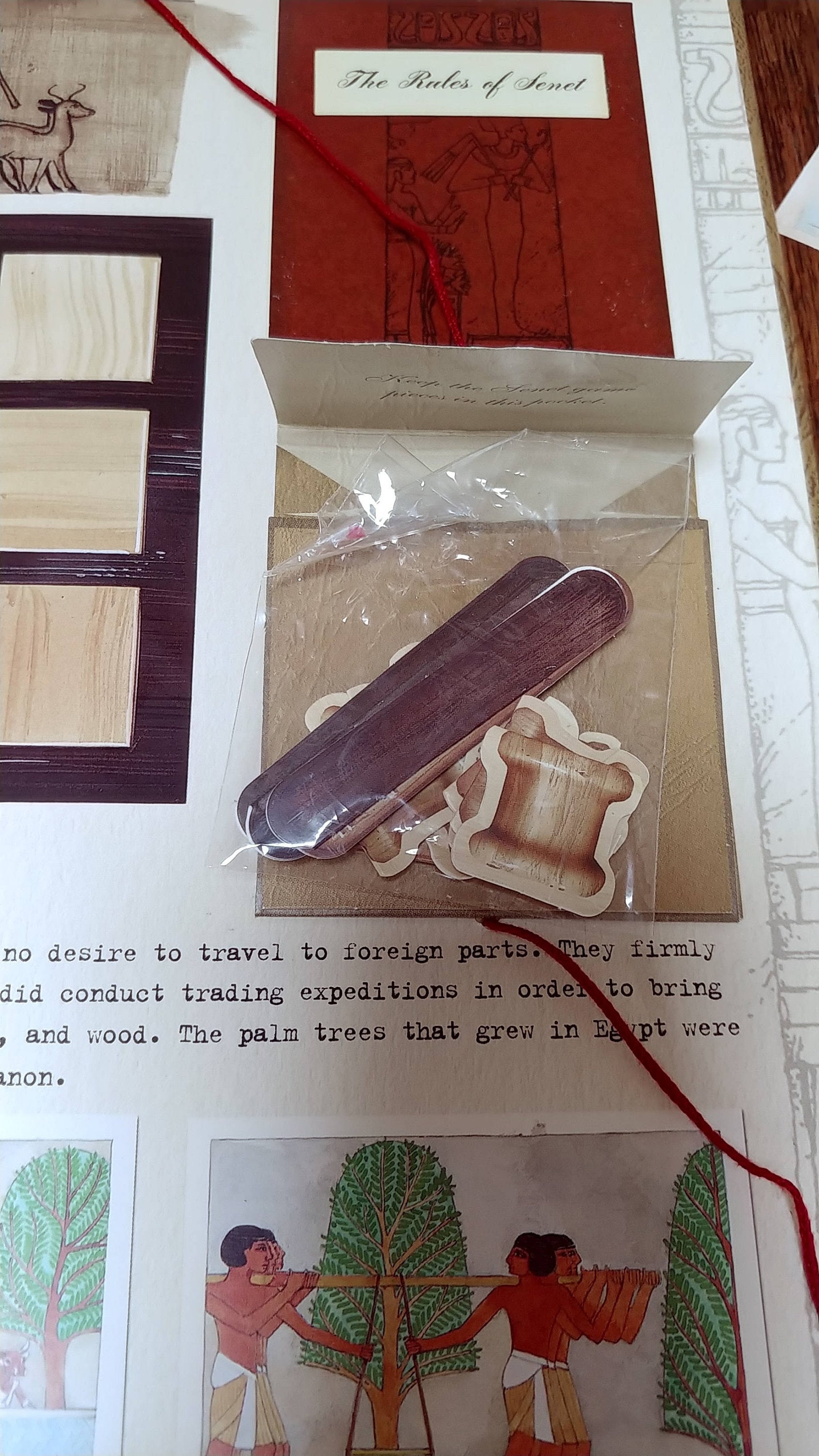 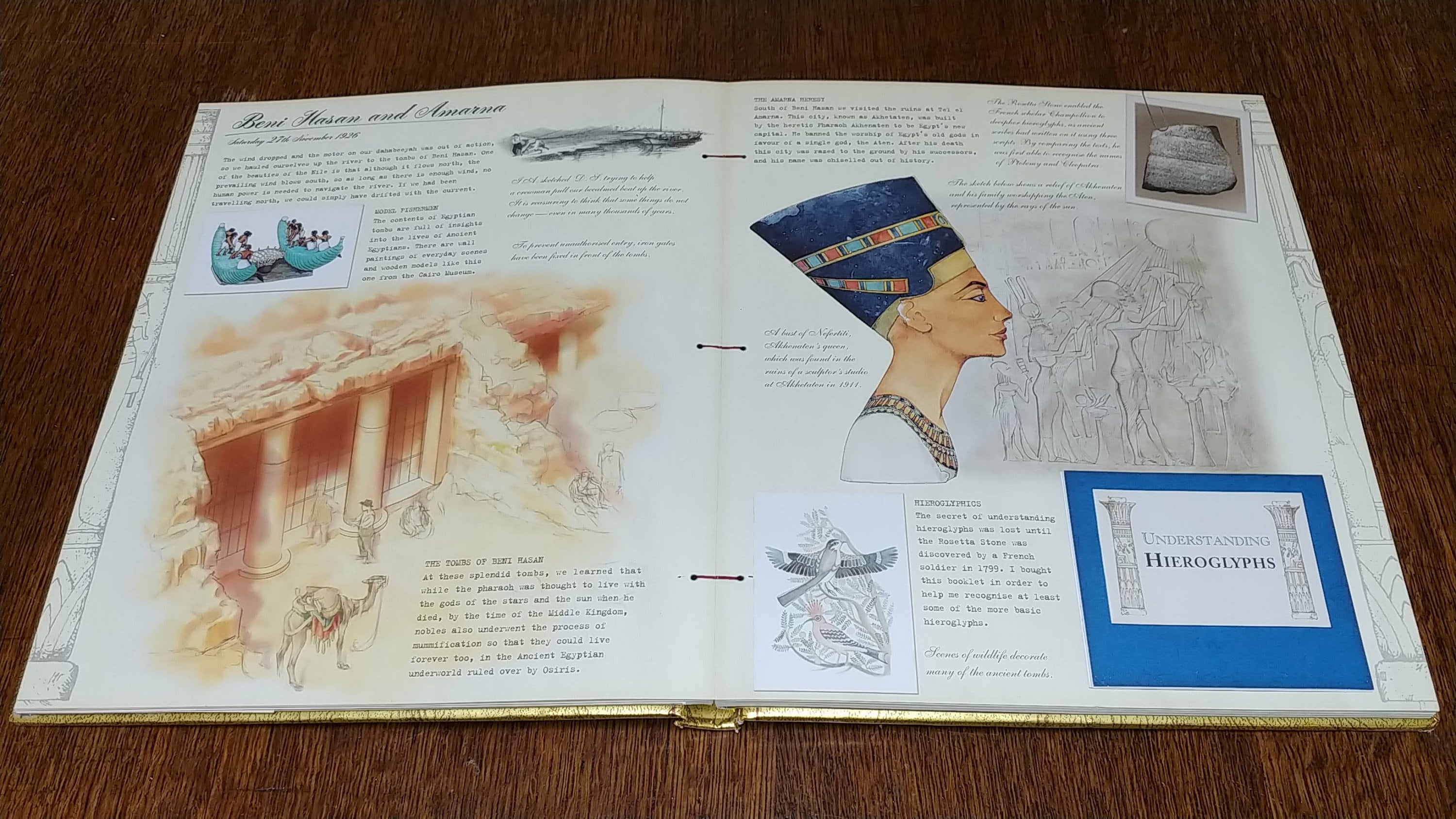 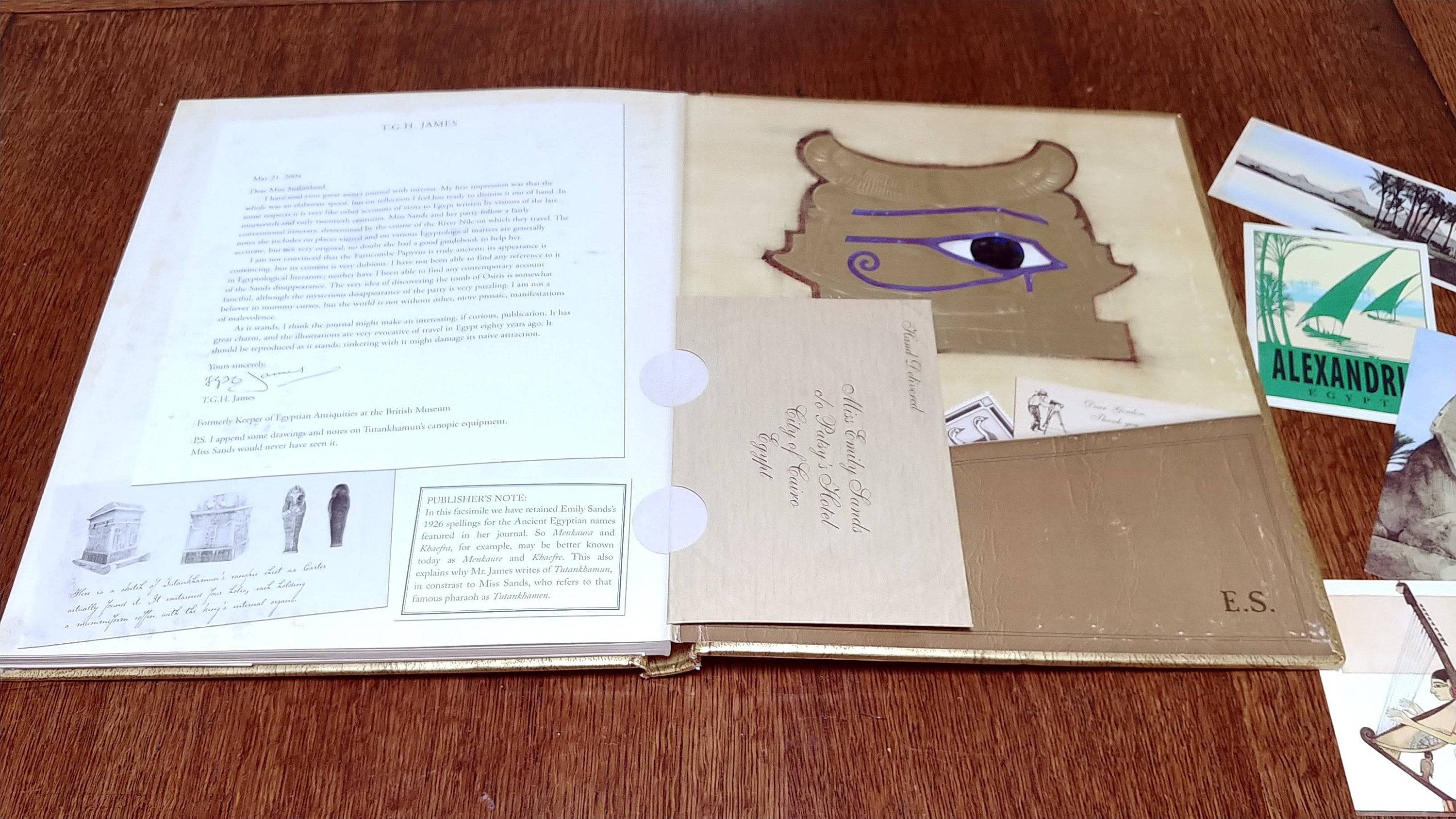 First edition of Egyptology: Search for the Tomb of Osiris. What happened to Miss Emily Sands? The Journal of Miss Emily Sands takes you on a tour of Egypt to find the answer.

Egyptology is presented as a journal kept by Miss Emily Sands, an Egyptologist last seen in 1926 when her archaeology expedition disappeared without a trace while searching for the tomb of Osiris. As the story goes, the journal was given to the publisher by her great-niece, Joanna Sutherland.

Ms. Sutherland writes in a letter to the publishers:

"In 1926, four years after the discovery of the tomb of Tutankhamen, a group of Egyptologists led by my great-aunt set out across Egypt, armed with a papyrus text of almost unimaginable antiquity. This papyrus had been brought to England some time in the early eighteenth century, and then found its way into the possession of the Farncombe family. I remember reading somewhere that there was speculation that this precious manuscript described the actual location of the lost tomb of Osiris... It appears that my great-aunt, being a good friend of the then Lady Farncombe, was shown the text, whereupon she persuaded her friend to mount an expedition to seek out the lost tomb. The expedition went ahead in November 1926, but after several progress reports, my great-aunt and her companions vanished into the desert, never to be heard of again. ... I had almost forgotten the stories of my great-aunt and her strange disappearance until May 1994, when I received a packet of papers and notebooks that had been forwarded from Patsy's Hotel in Cairo. ... I was shocked to see that the papers were in my great-aunt's handwriting. ... As I read through my great-aunt's journal, I became more and more convinced that she had indeed discovered something of tremendous importance...."

Ms. Sutherland hoped that publication of the journal would capture the attention of someone who could resolve the mystery of her great-aunt Emily Sands's disappearance.

The journal, organized as a scrapbook, describes Egyptian history, culture, important archaeological discoveries, and how to translate hieroglyphs in the course of searching for the lost tomb of Osiris.

It's a wonderful, creative way to introduce children to the wonders of Egypt. If you're willing to give up the book!

Condition*: Near Fine. Without dust jacket, as issued. The back cover board is mildly scuffed from normal shelf wear, and there's a bump and small split at the head of the spine. All the interior pages are in fine condition, complete with fold-outs, ephemera, and other pieces.