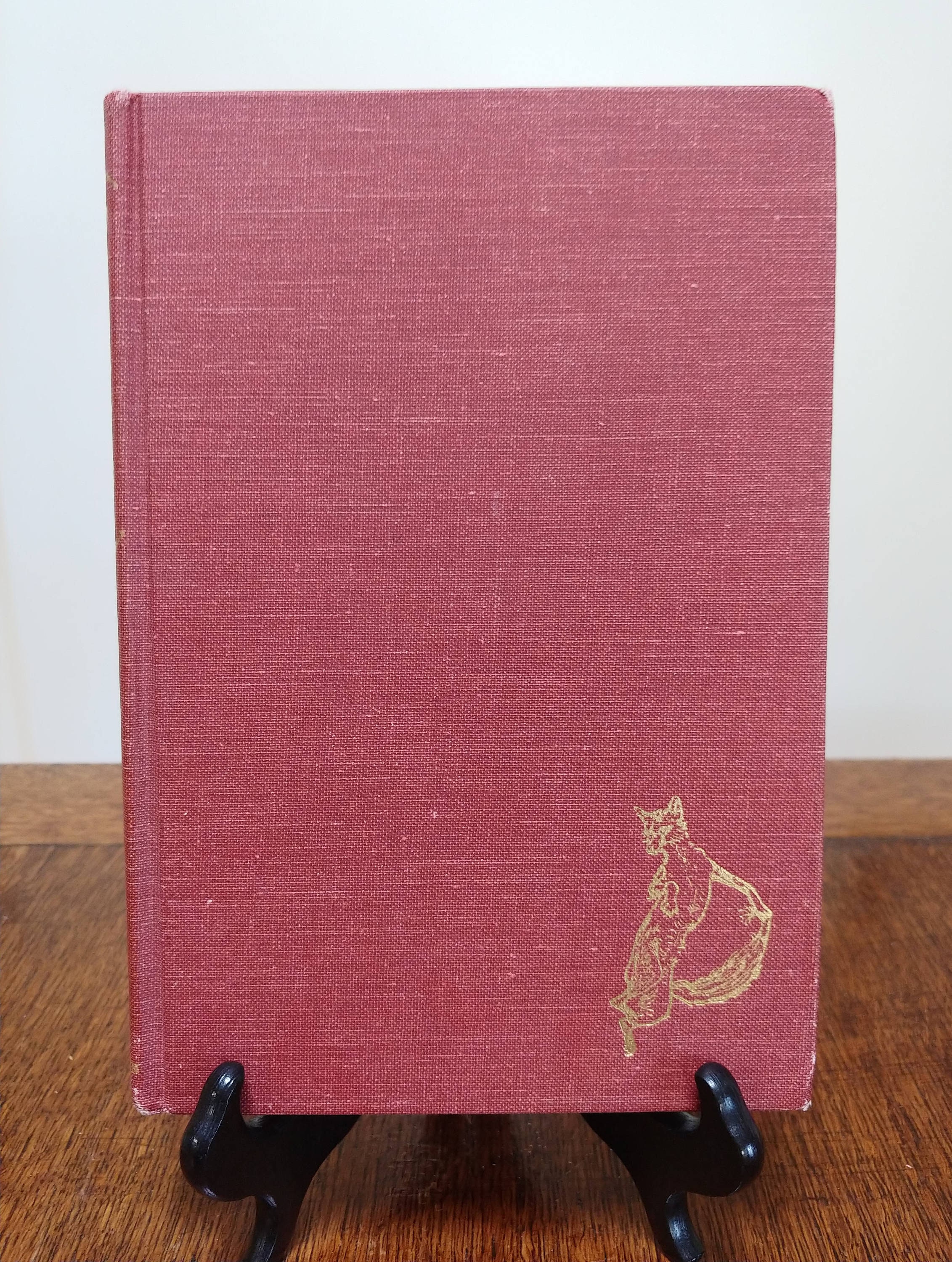 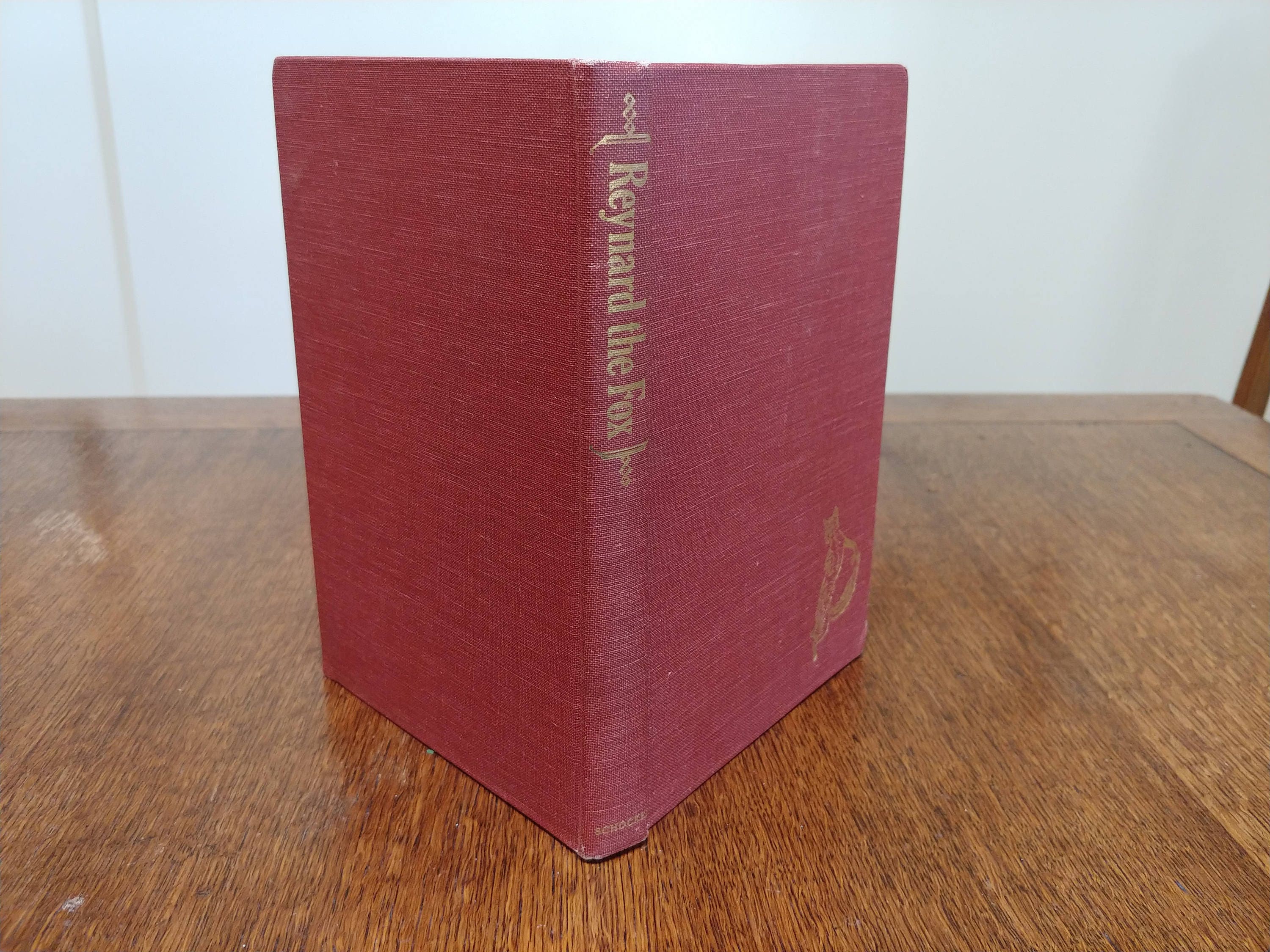 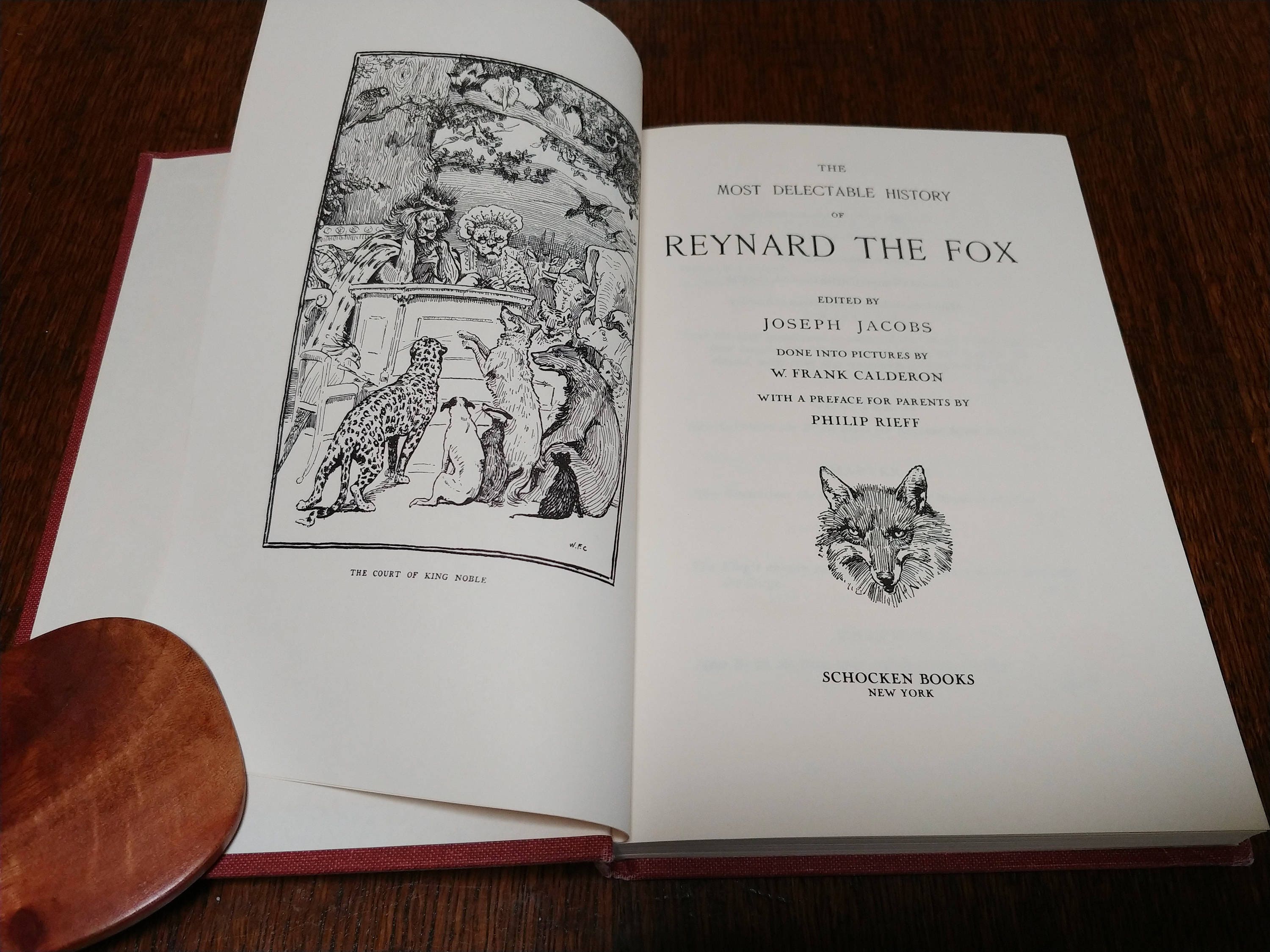 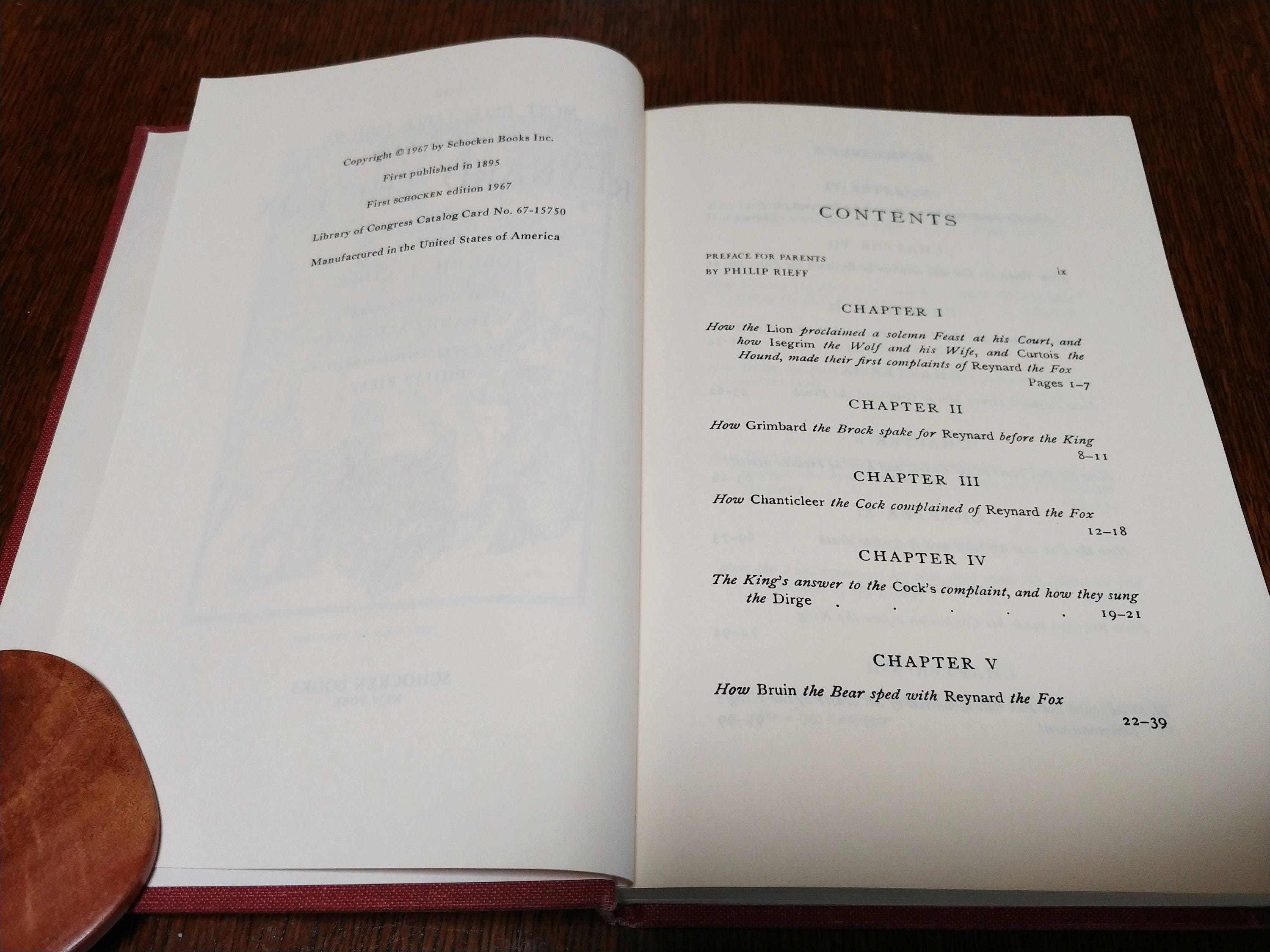 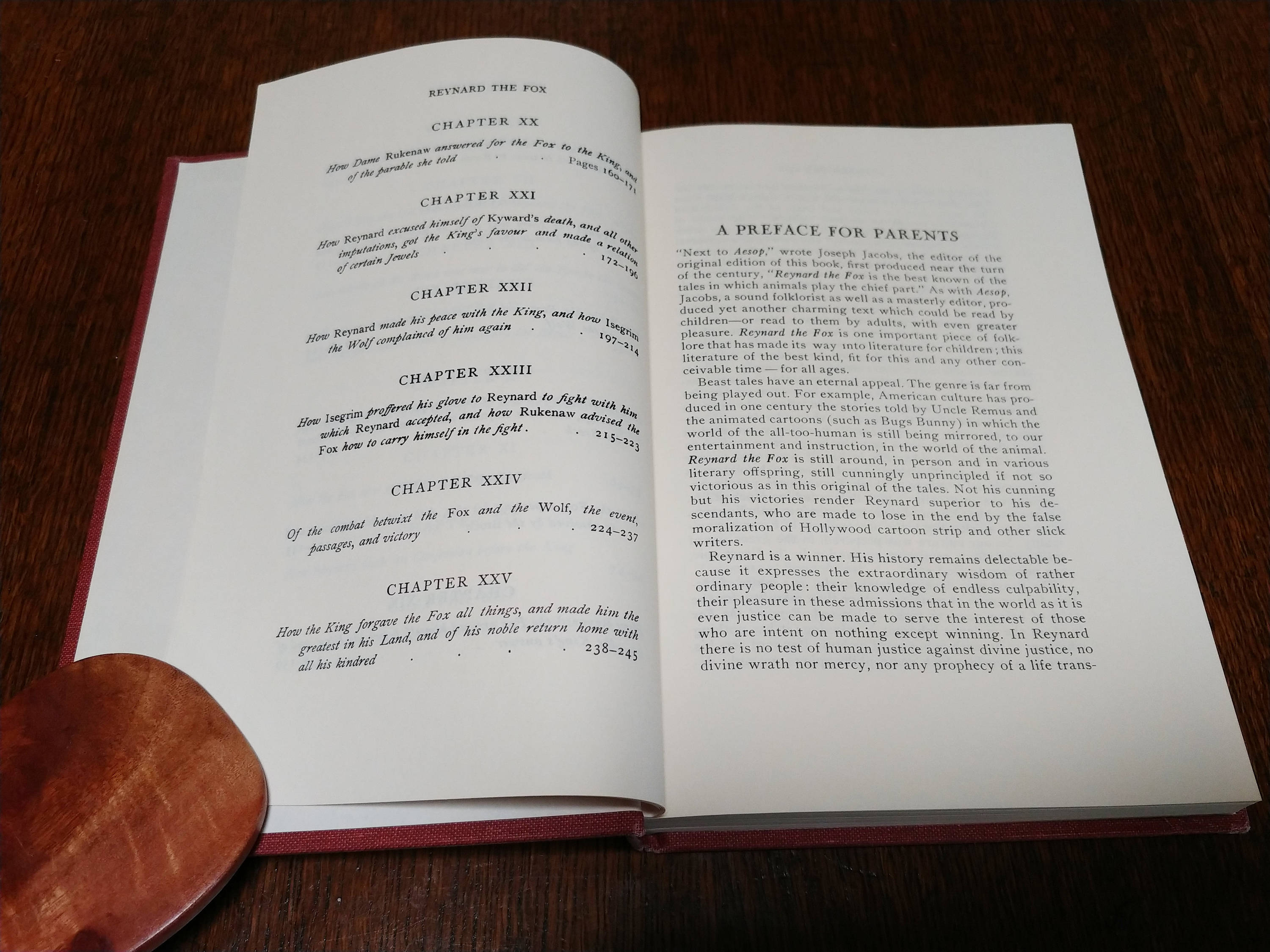 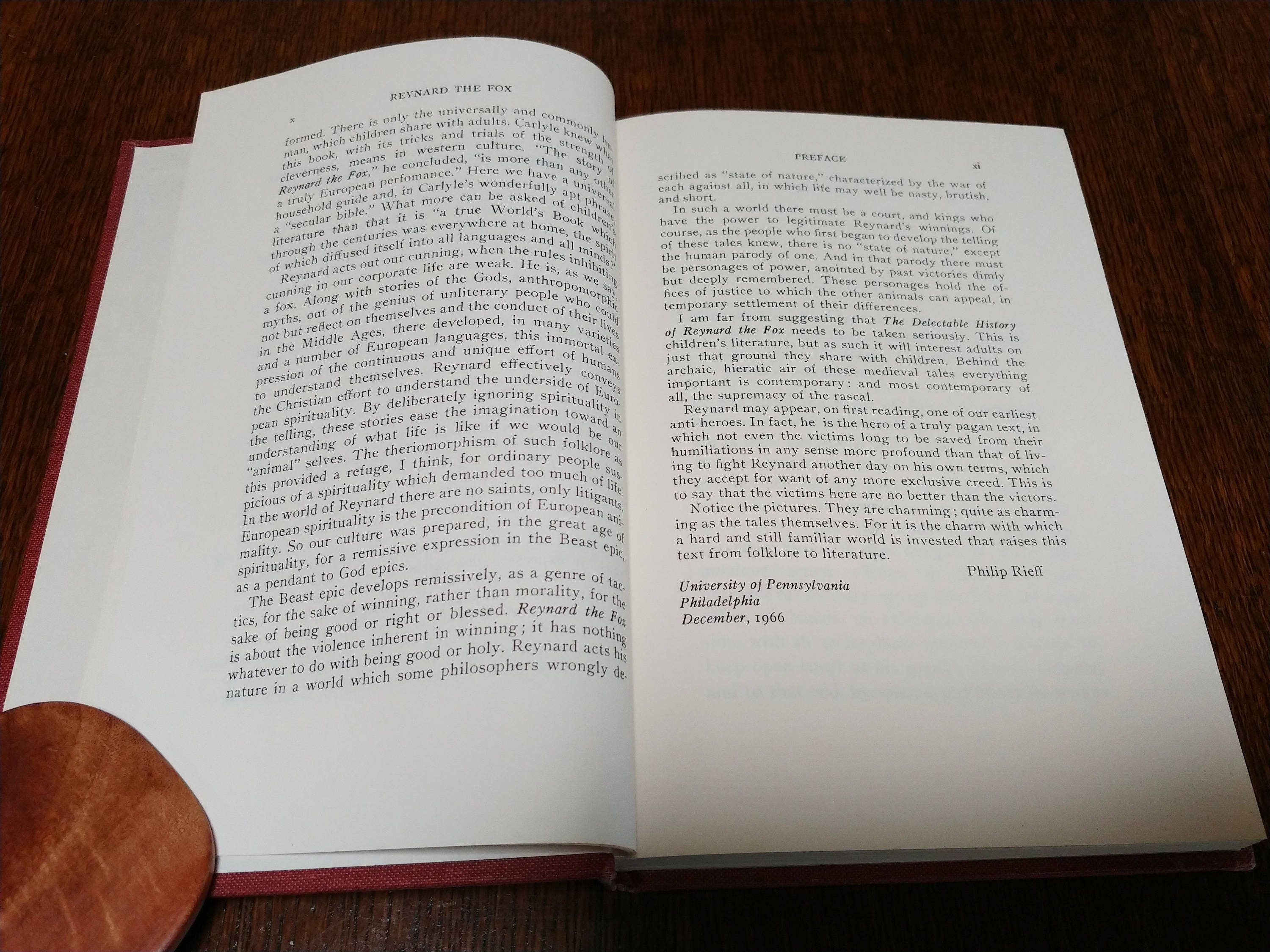 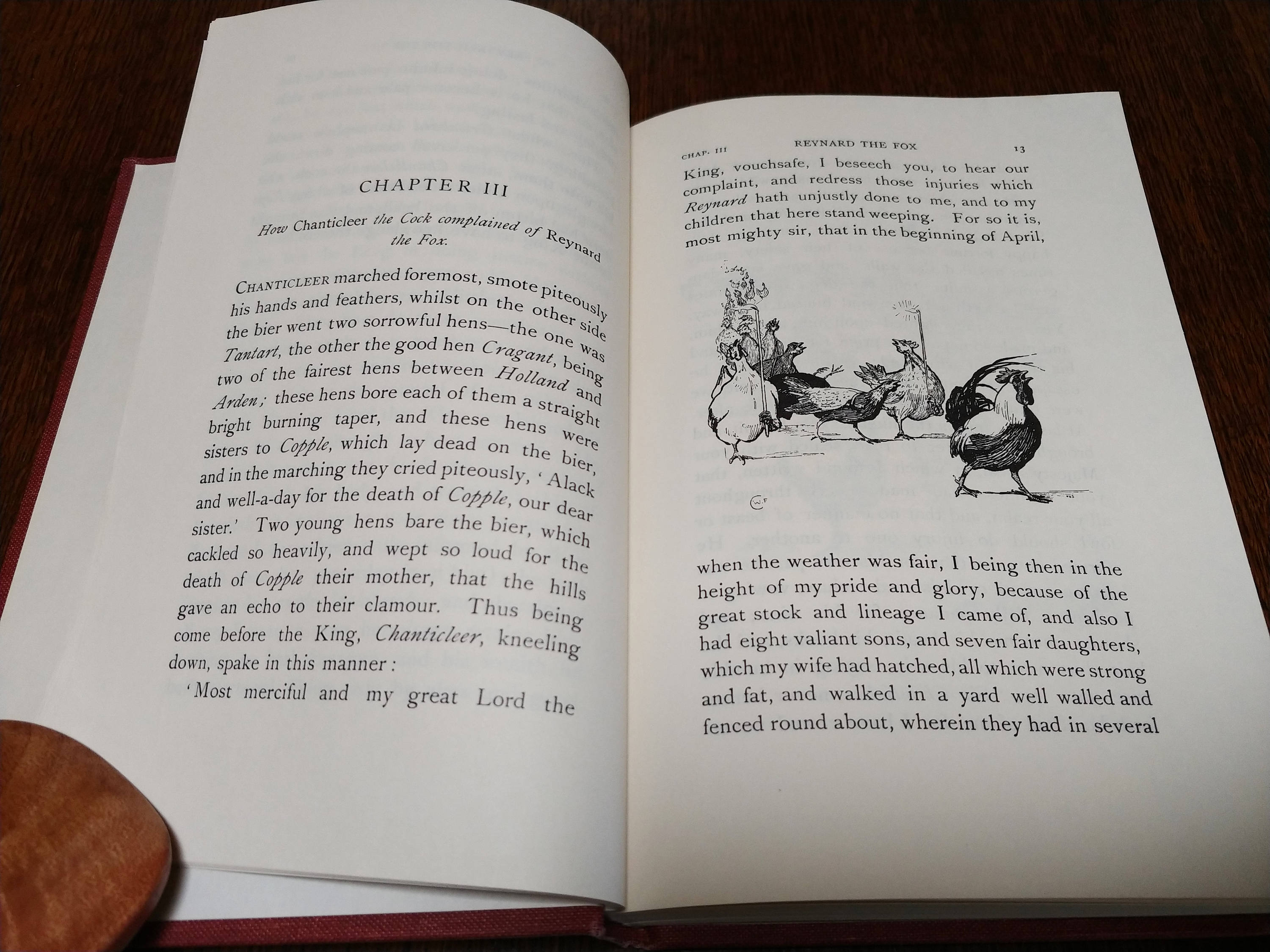 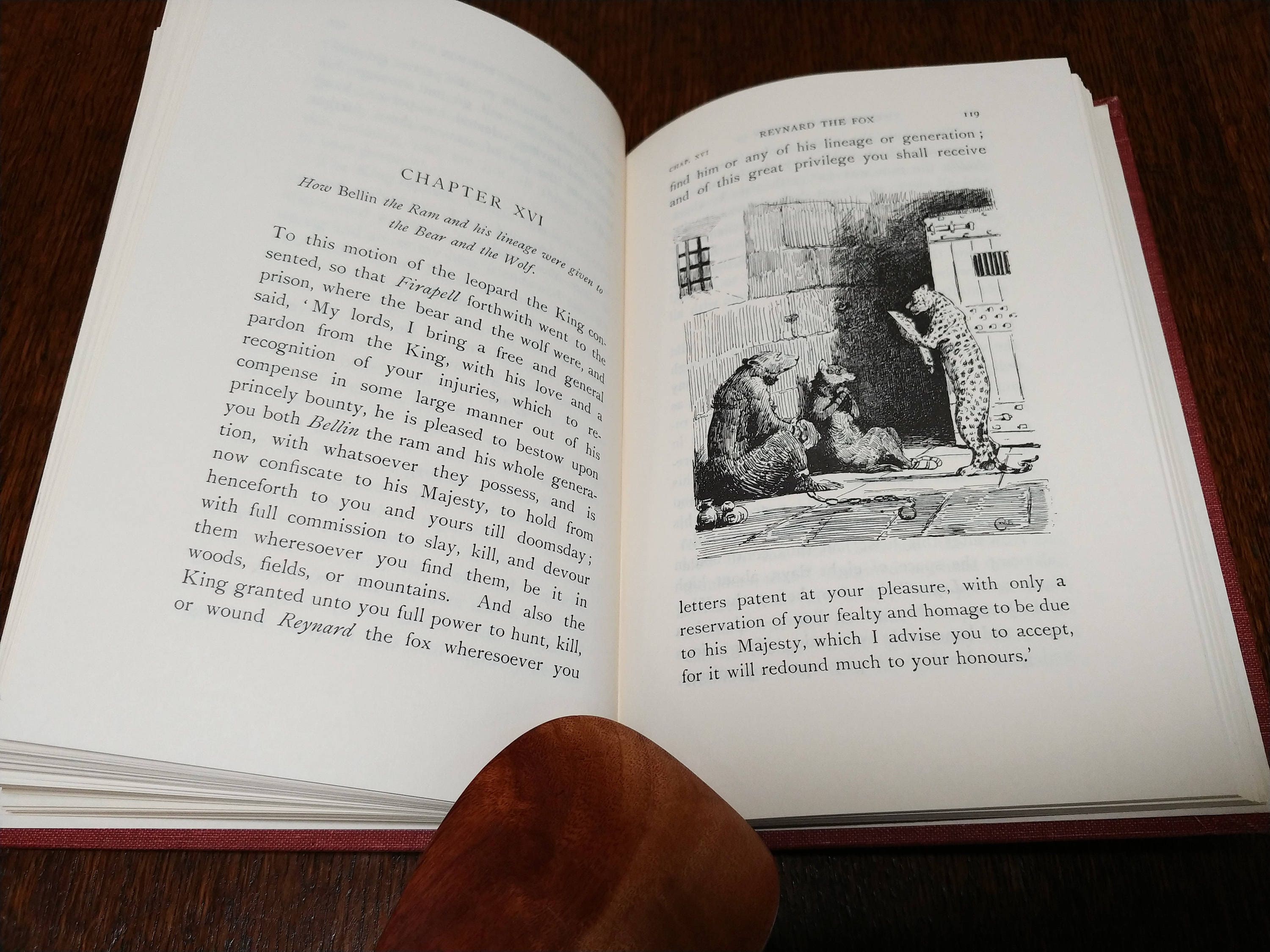 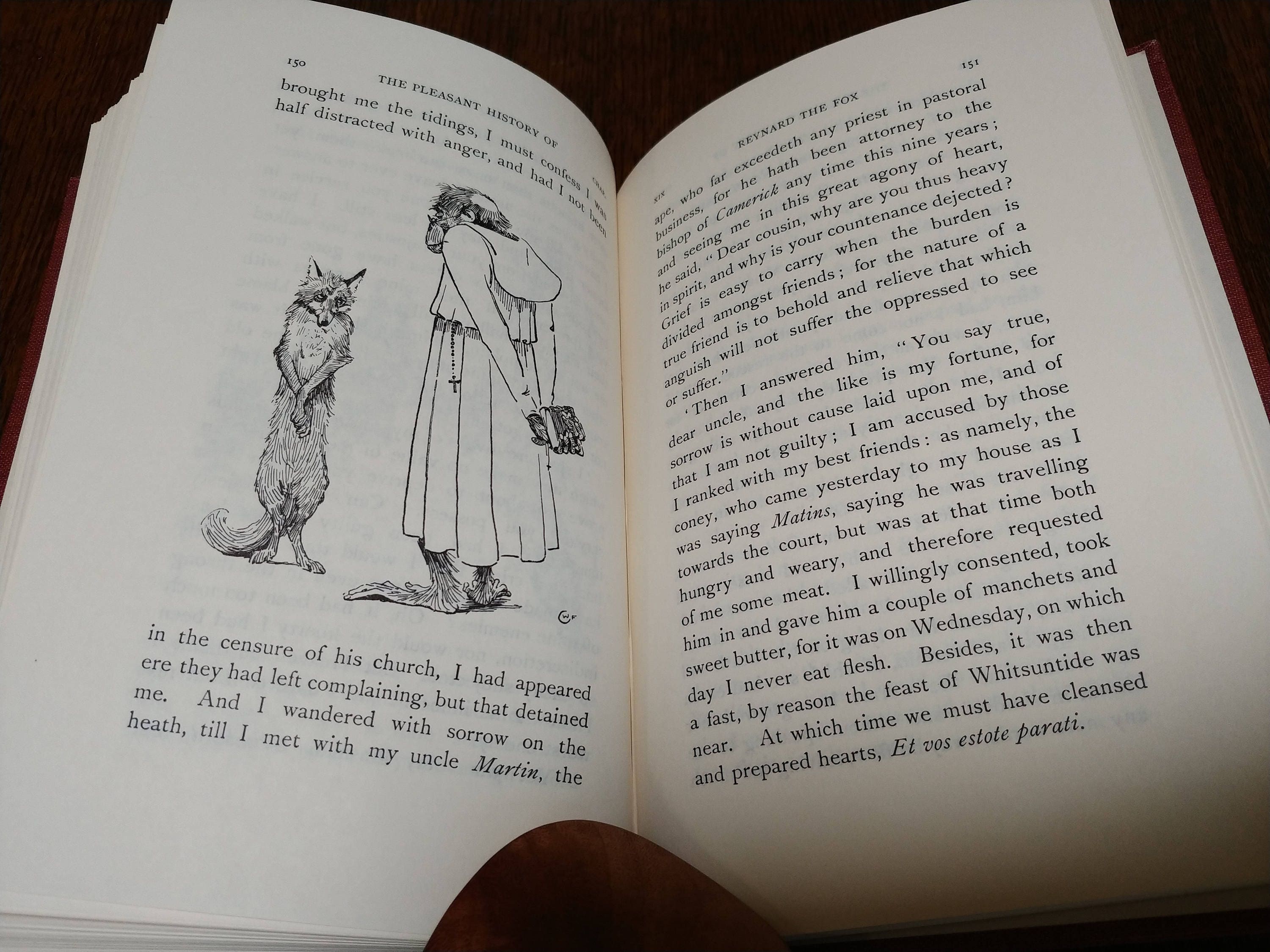 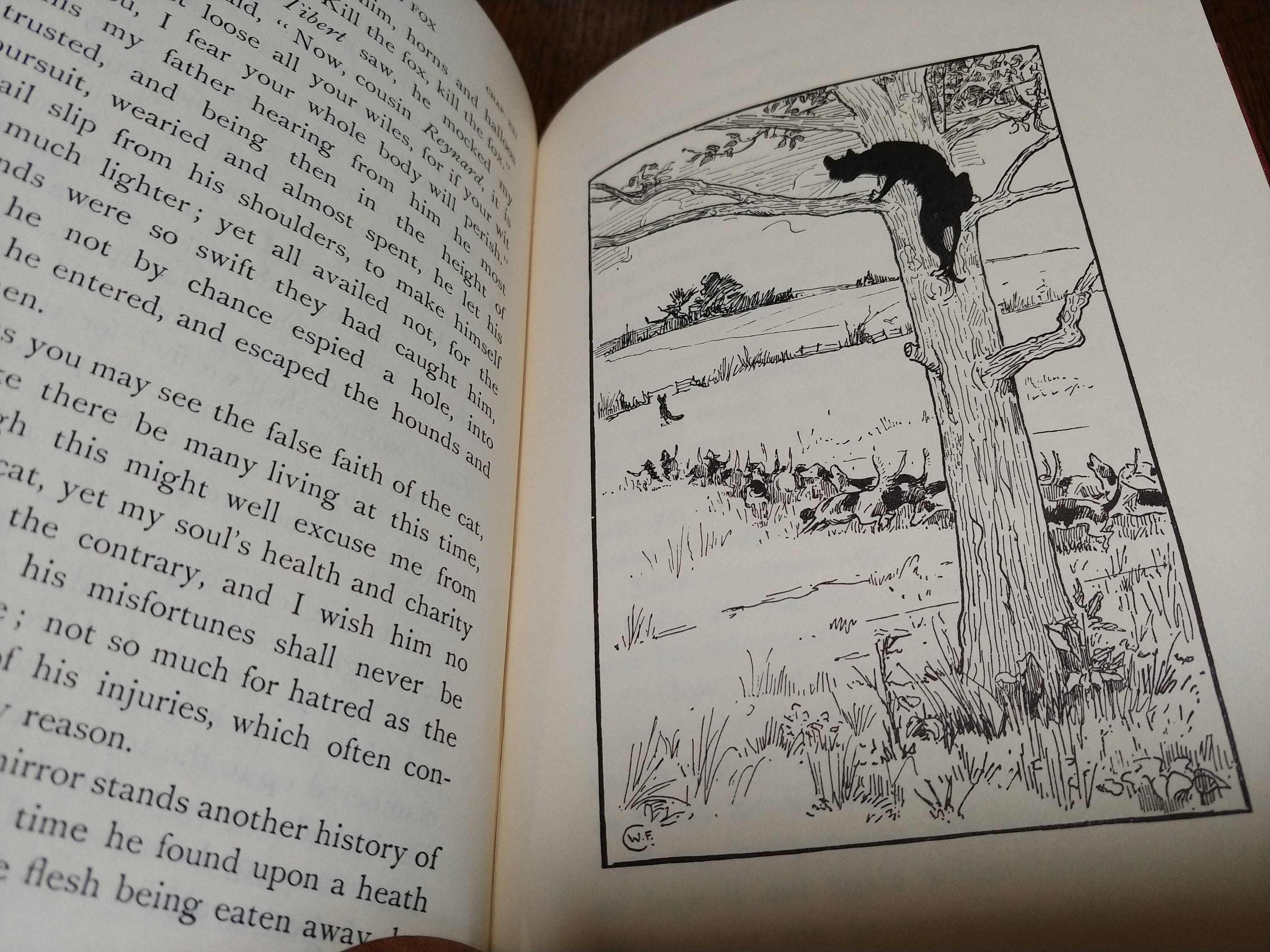 A faithful 1966 reissue of The Most Delectable History of Reynard The Fox, edited by Joseph Jacobs with illustrations by W. Frank Calderon, published by Schocken Books.

Fables are intended to teach a lesson and this story's may be summarized as, "Judge not, lest ye be judged".

Reynard the Fox is a thousand year-old epic fable about a villainous fox who preys upon other animals and delights in their mishaps and suffering, even as he's brought to the attention of the King, who instead of rendering justice for the fox's victims admonishes them for their own dishonesty and guile and rewards a humbled Reynard with a position in the King's counsel.

Joseph Jacobs (1854-1916) was a distinguished scholar, educator, writer, and folklorist who was born in Australia, spent much of his life in England, and came to the United States to serve as revising editor of the Jewish Encyclopedia and later to teach at the Jewish Theological Seminary in New York.

In England, Jacobs collected and edited a broad selection of traditional Indian, European, Celtic, English, and Jewish tales for young readers. Two collections of English fairy tales popularized stories such as The Magic Fiddle, Jack and The Beanstalk, Goldilocks and The Three Bears, The Three Little Pigs, The Pied Piper, and many others.

Jacobs edited Reynard The Fox in 1895. The classic version, of Dutch, German, French, and English ancestry, first appeared in writing in the 12th C and satirized the Church and ruling elites. The Victorian regard for public decency and childhood sensibilities preferred a less violent, more forgiving Reynard. Jacobs was skilled at editing ancient stories for modern readers while preserving their roots and integrity.

Schocken Books, founded in Berlin in 1931, was shut down by the Nazis in 1939. By then, Jewish authors could only be published by a Jewish publishing house. Founder Salman Schocken went to Palestine in 1934, then the United States in 1940, and re-established Schocken Books in 1945. Schocken continues to publish literary works by Jewish authors as an imprint of PenguinRandom House.

Condition*: Very Good. Lacks dust jacket. Cloth cover boards are slightly bumped at the head and tail of the spine and corners due to normal shelf wear else a clean, tight, lightly read copy.

*Based on guidelines of the Independent Online Booksellers' Association