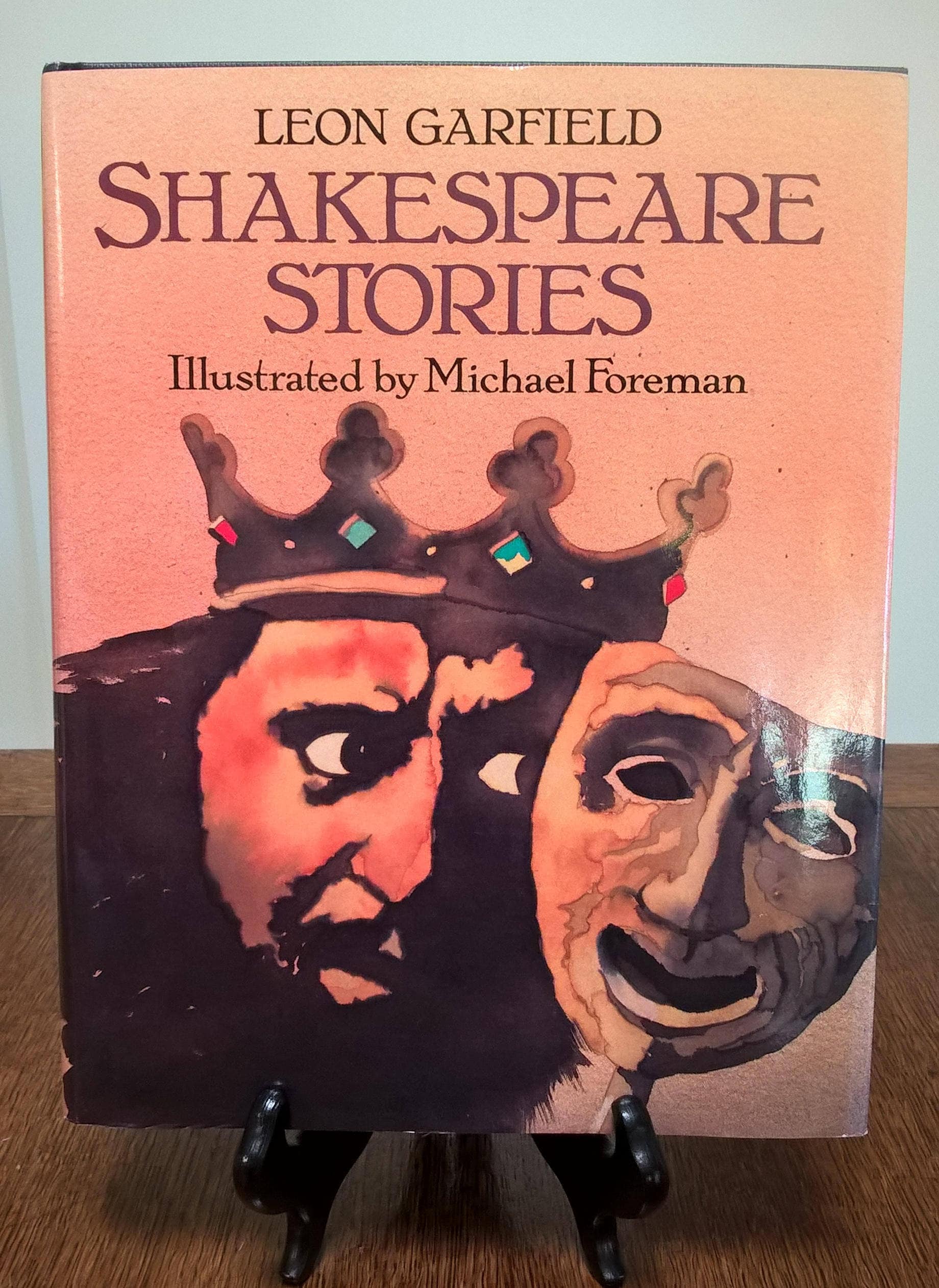 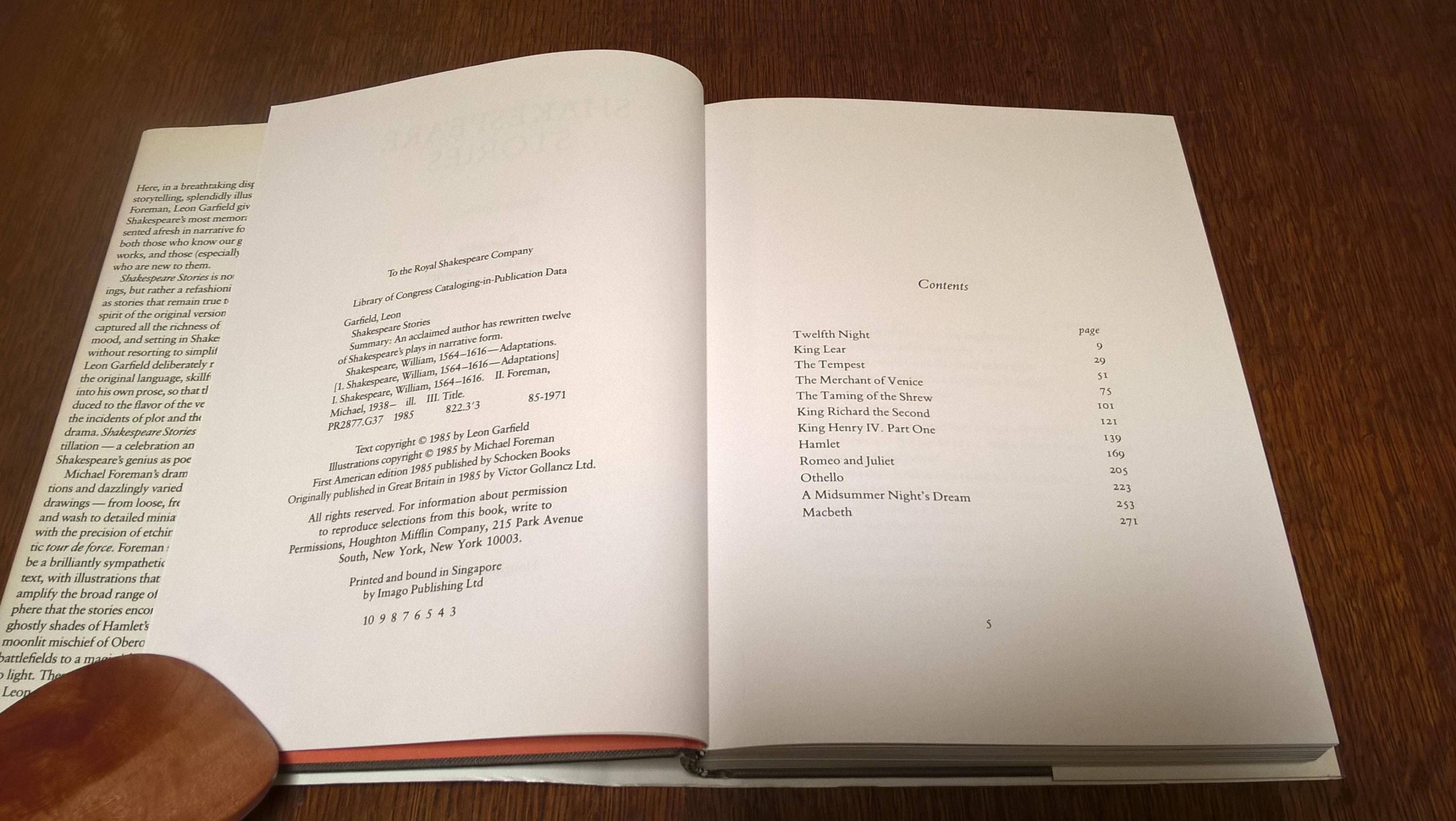 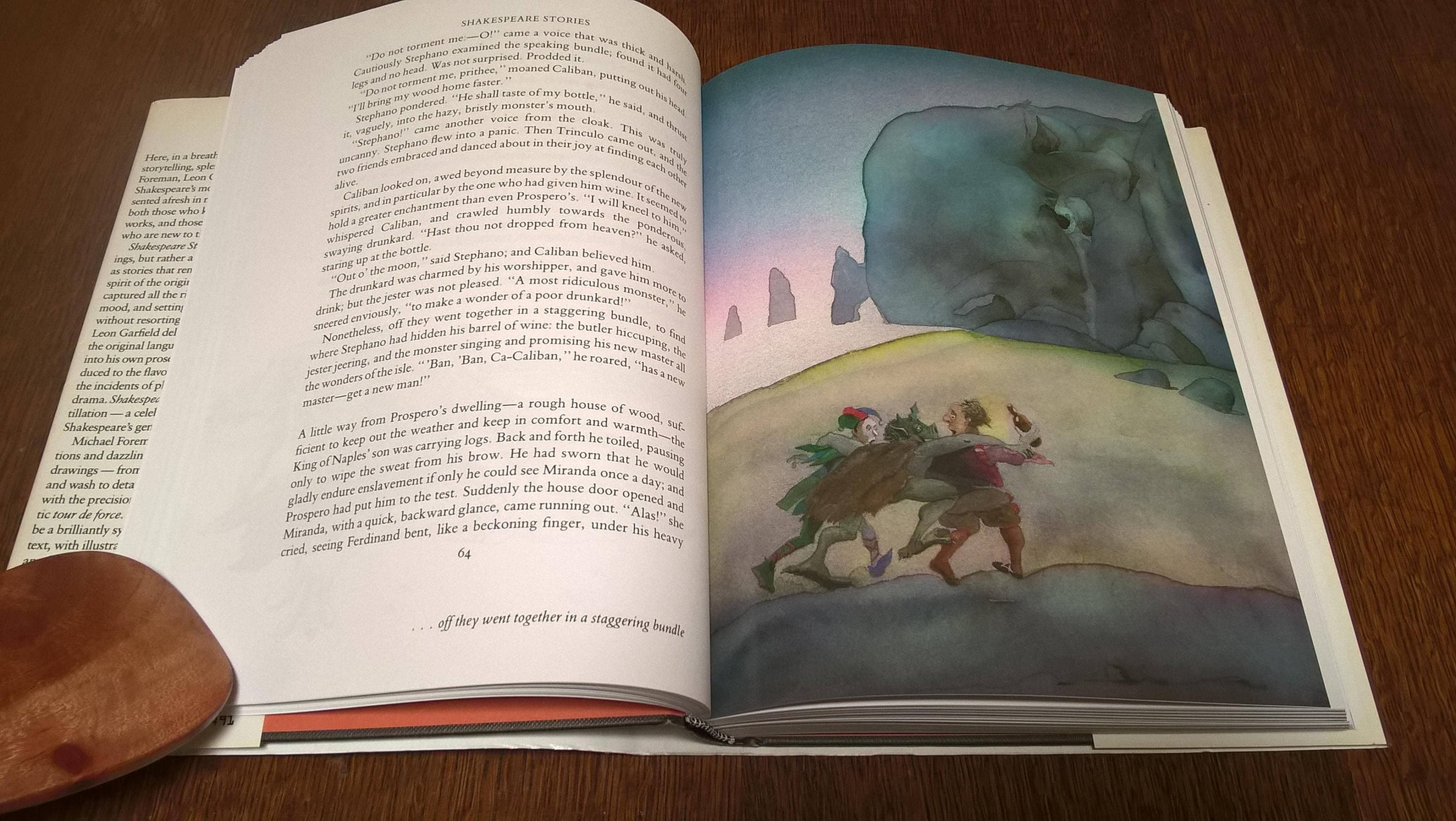 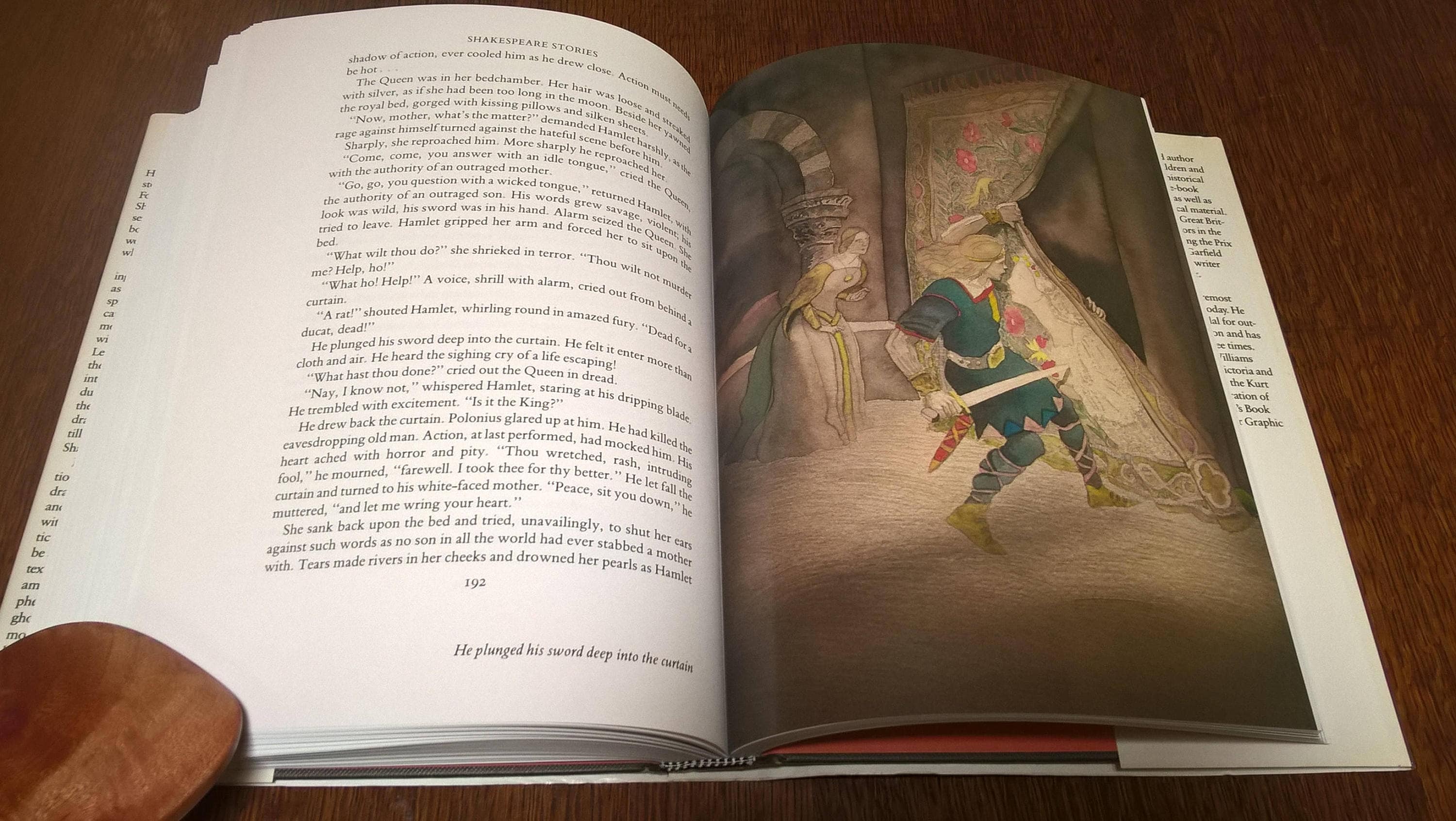 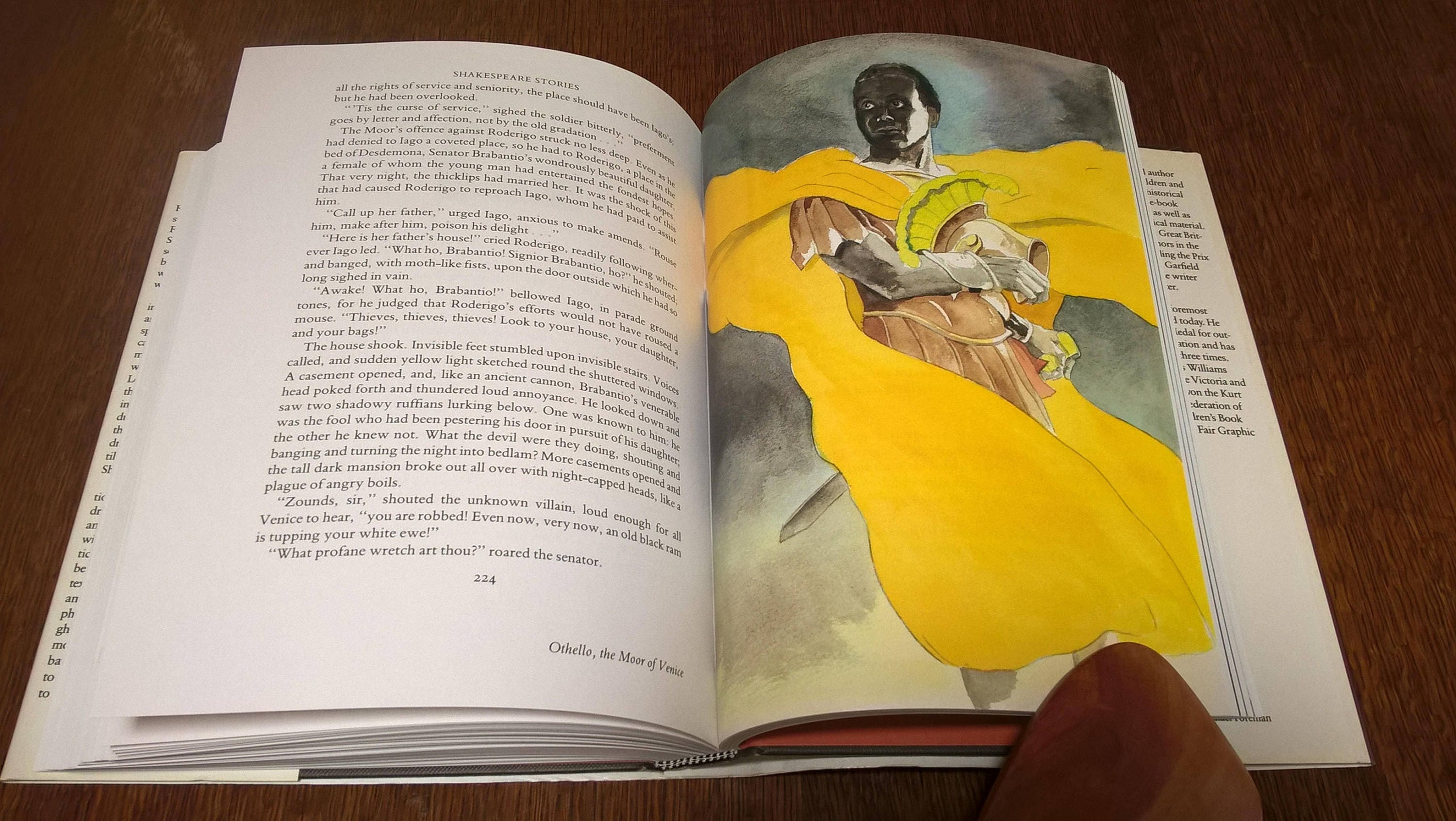 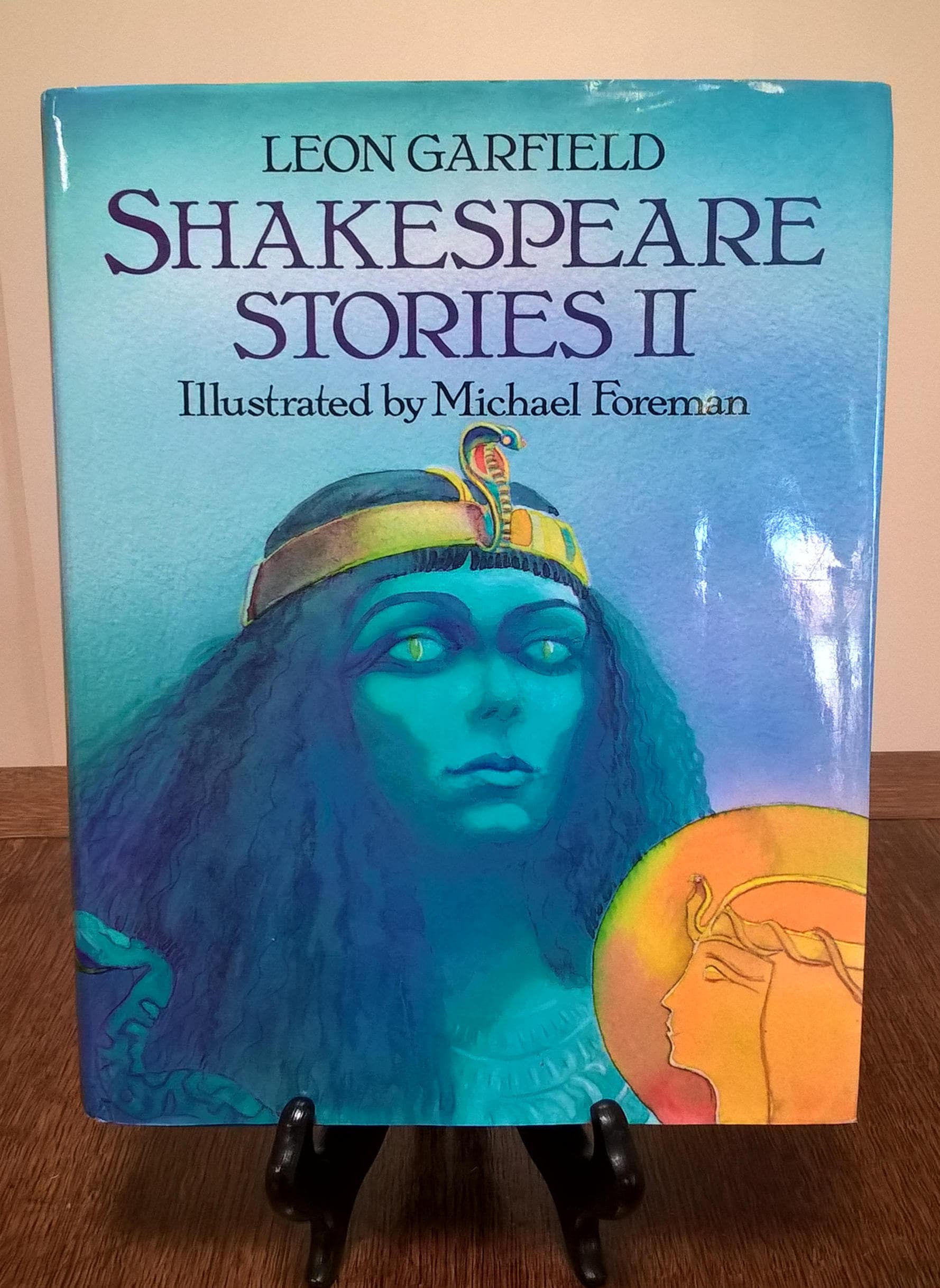 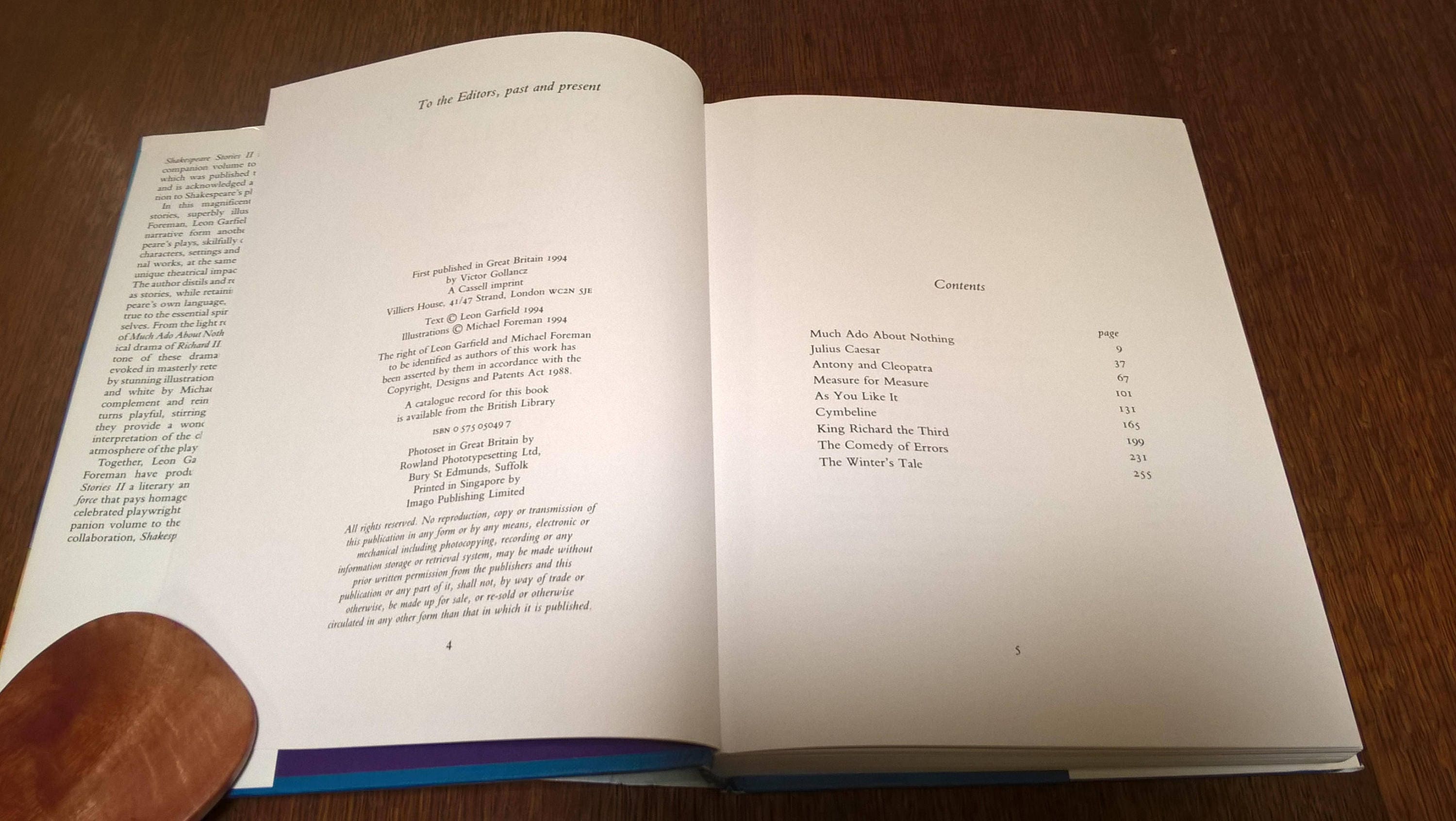 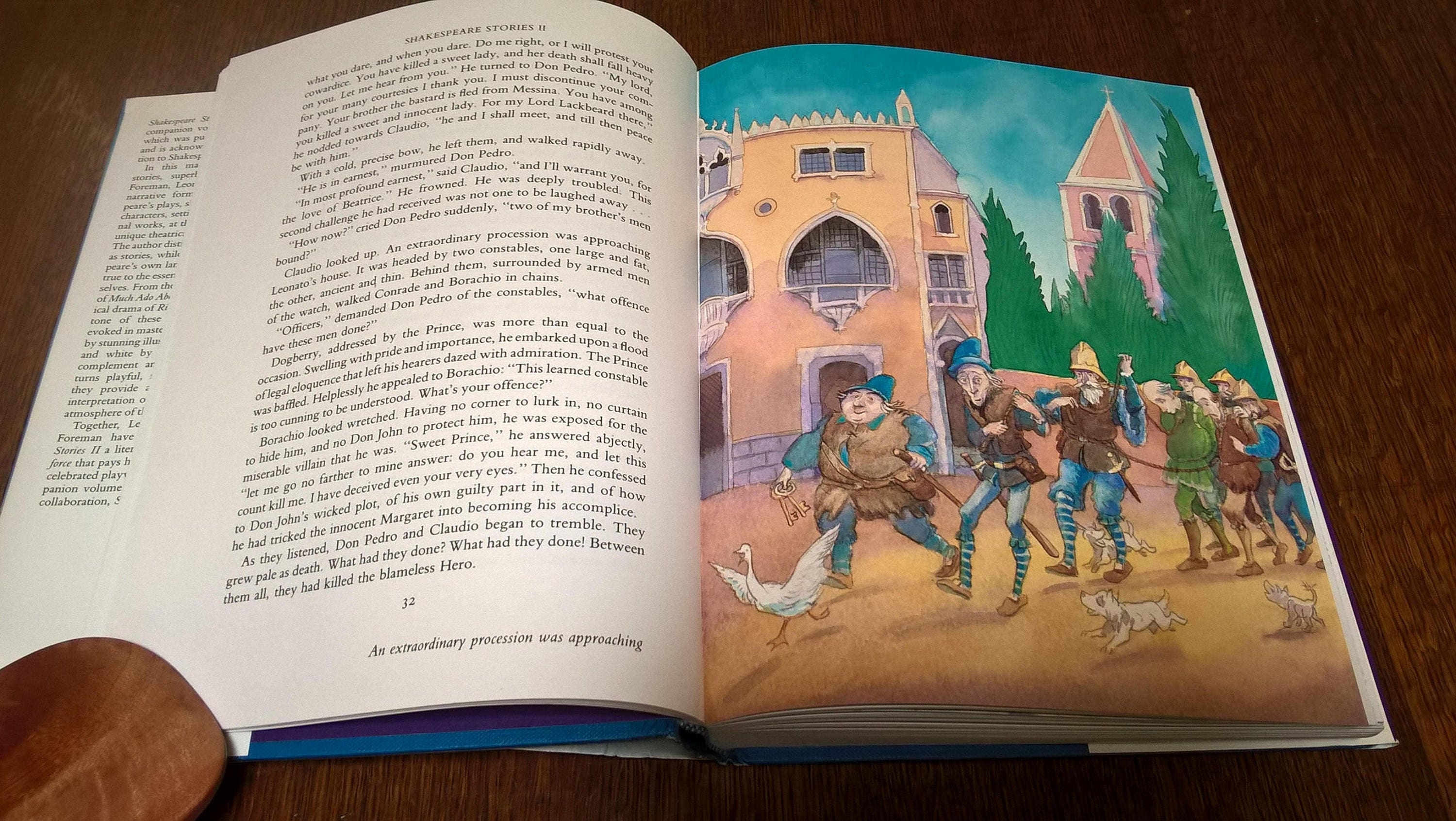 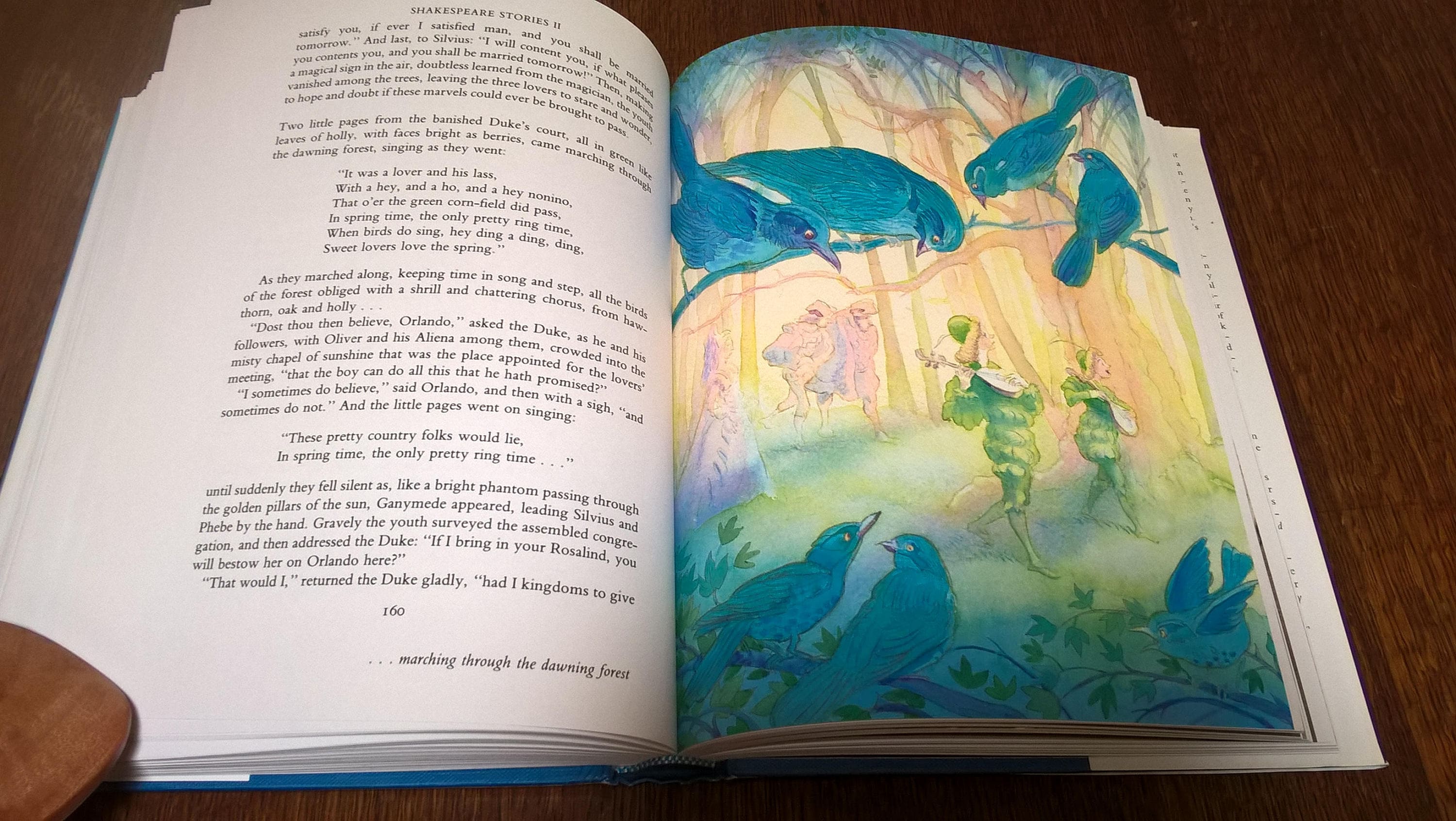 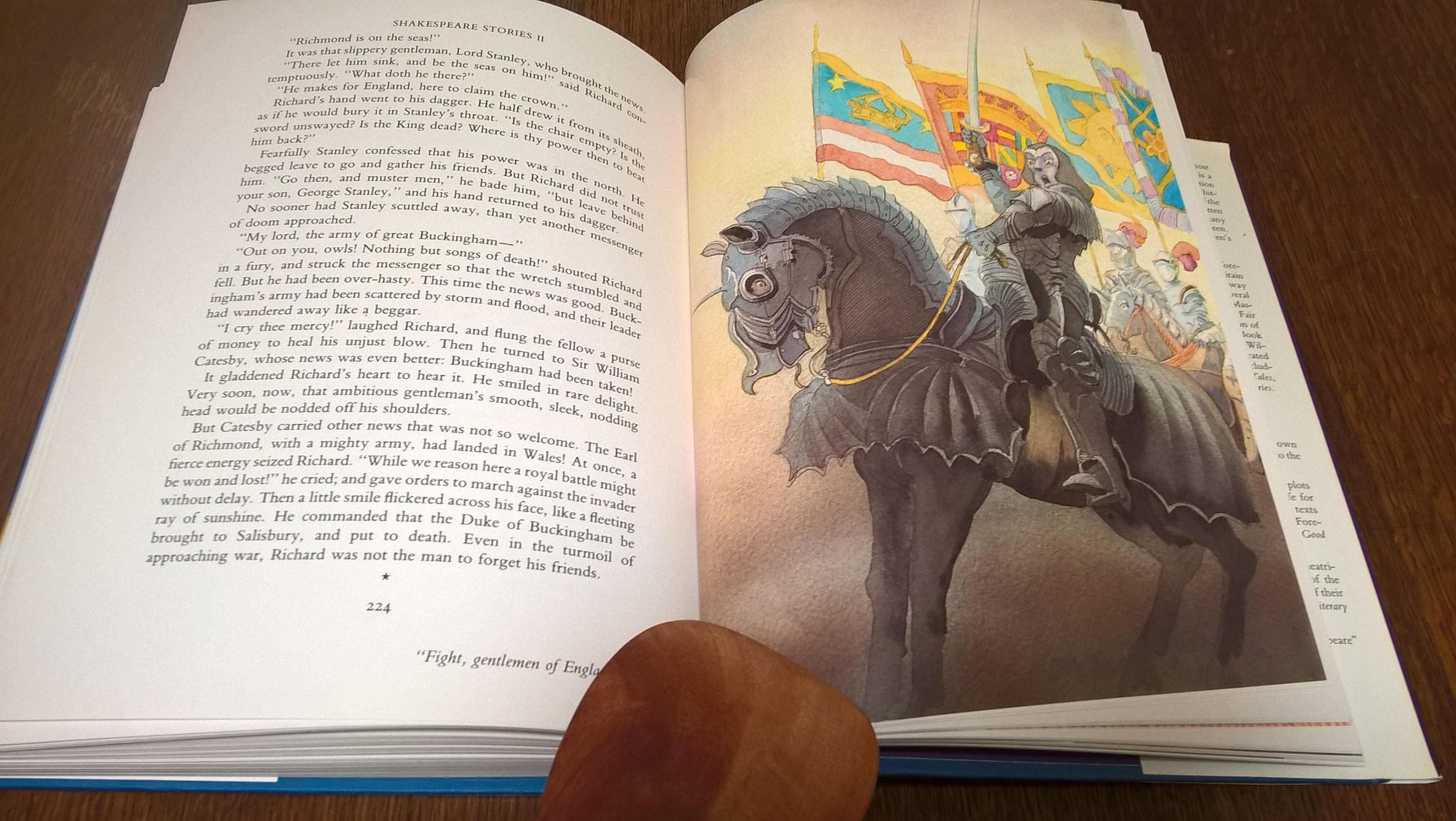 Shakespeare Stories, Volumes I and II, written by Leon Garfield, illustrated by Michael Foreman. A two-book set of one of the best introductions to Shakespeare for children and young adults.

How do you make Shakespeare accessible to children, from generation to generation? Leon Garfield's Shakespeare Stories Volumes I (1985) and II (1994) were widely acclaimed for accomplishing this feat when published and are still considered among the best introductions to Shakespeare ever created for children and young adults.

"Leon Garfield's performance in ''Shakespeare Stories'' is masterly. In narratives of remarkable clarity the British writer tells the stories of a dozen plays -five tragedies, four comedies, two histories and ''The Merchant of Venice.'' That last one and ''The Taming of the Shrew,'' ''Twelfth Night'' and ''A Midsummer Night's Dream'' best reveal the virtuosity Mr. Garfield has developed in many years of writing dozens of children's books and historical novels... In Mr. Garfield's deft narratives the laughter is the same that one finds in the plays, but so is the uneasiness - brought on by the angry departure of Malvolio...the pain of Shylock...or the unsettling transformation of Kate into a dutiful wife. He gets the balances right... Possibly just as important for the audience of young teen-agers the book seems meant for primarily (although it can be a pleasure for anyone older than that to read these versions), he holds each story to about 5,000 words."

I'm keeping the two books together, as I found them. There's a story behind the fact that Shakespeare II is a true first edition, while Shakespeare I is a third printing. I like the idea that the person who bought the first volume enjoyed it so much he/she bought the second volume 11 years later as soon as it was available

Leon Garfield (1921 - 1996) was an accomplished, award-winning British author of books for children and adults, known for adventure stories based on historic events. He won the Carnegie Medal for The God Beneath The Sea (1970) and was a three-time Carnegie runnerup for Smith, Black Jack, and Drummer Boy.

Michael Foreman (1938 - ) is a much-loved British writer and illustrator of children's books, and his work for the Shakespeare Stories would have pleased the Bard. He is a two-time winner of the Kate Greenaway Award, the UK's highest honor for children's book illustration, in 1982 for War Boy: A Country Childhood and in 1989 for Long Neck and Thunder Foot (written by Helen Piers), and Sleeping Beauty and Other Favourite Fairy Tales (translated by Angela Carter).

Condition*: This is a two-book set. Shakespeare II is a first edition.