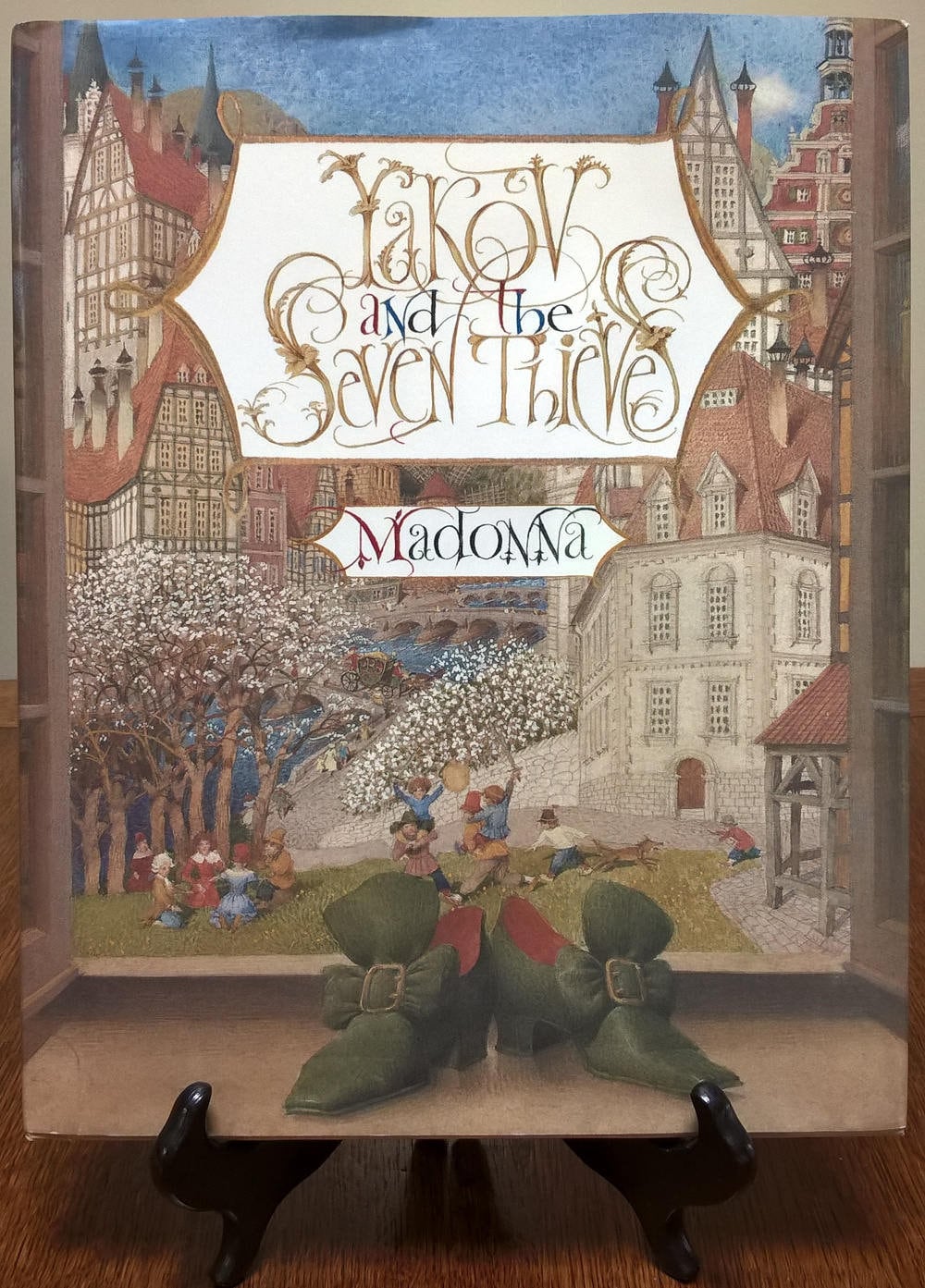 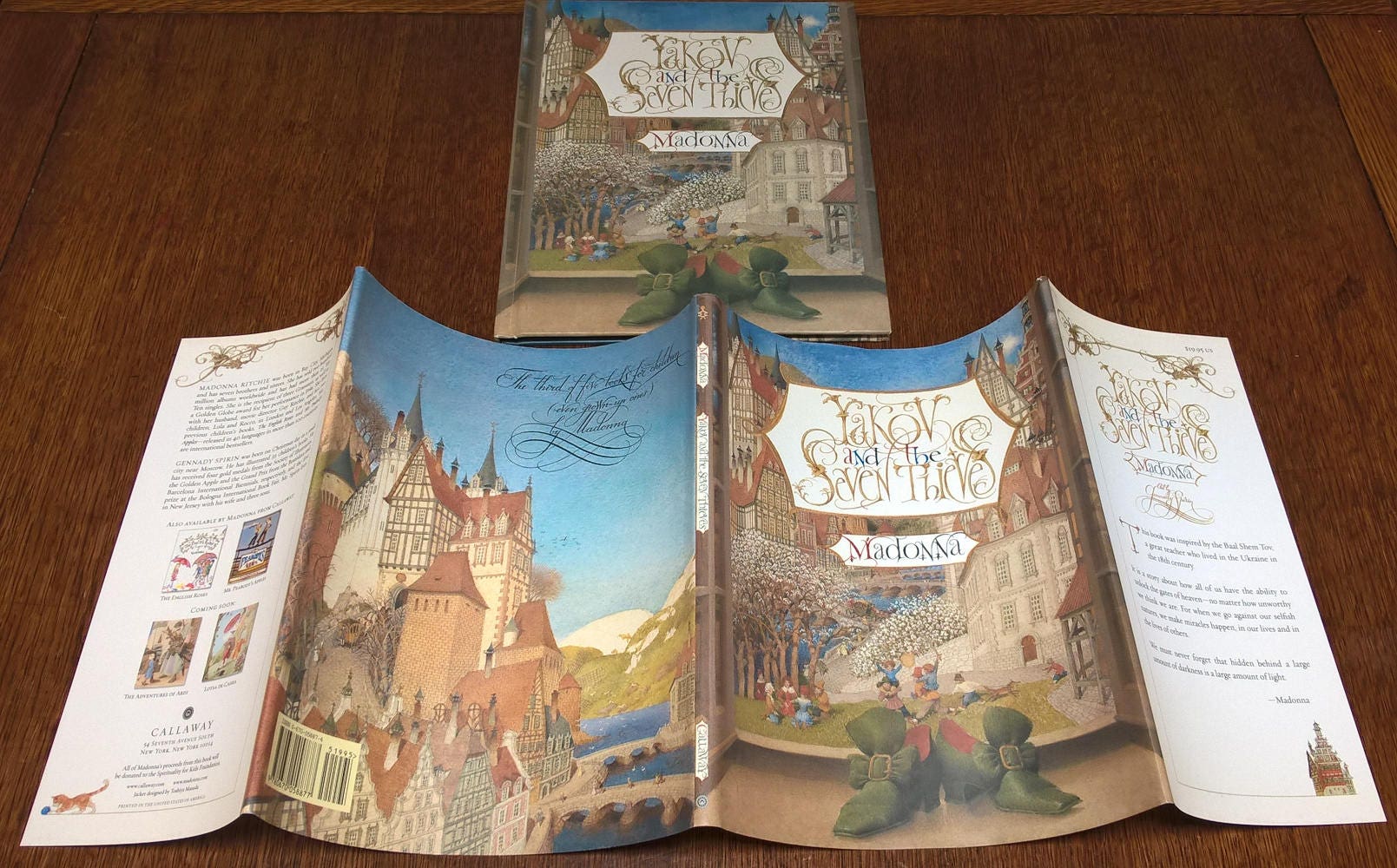 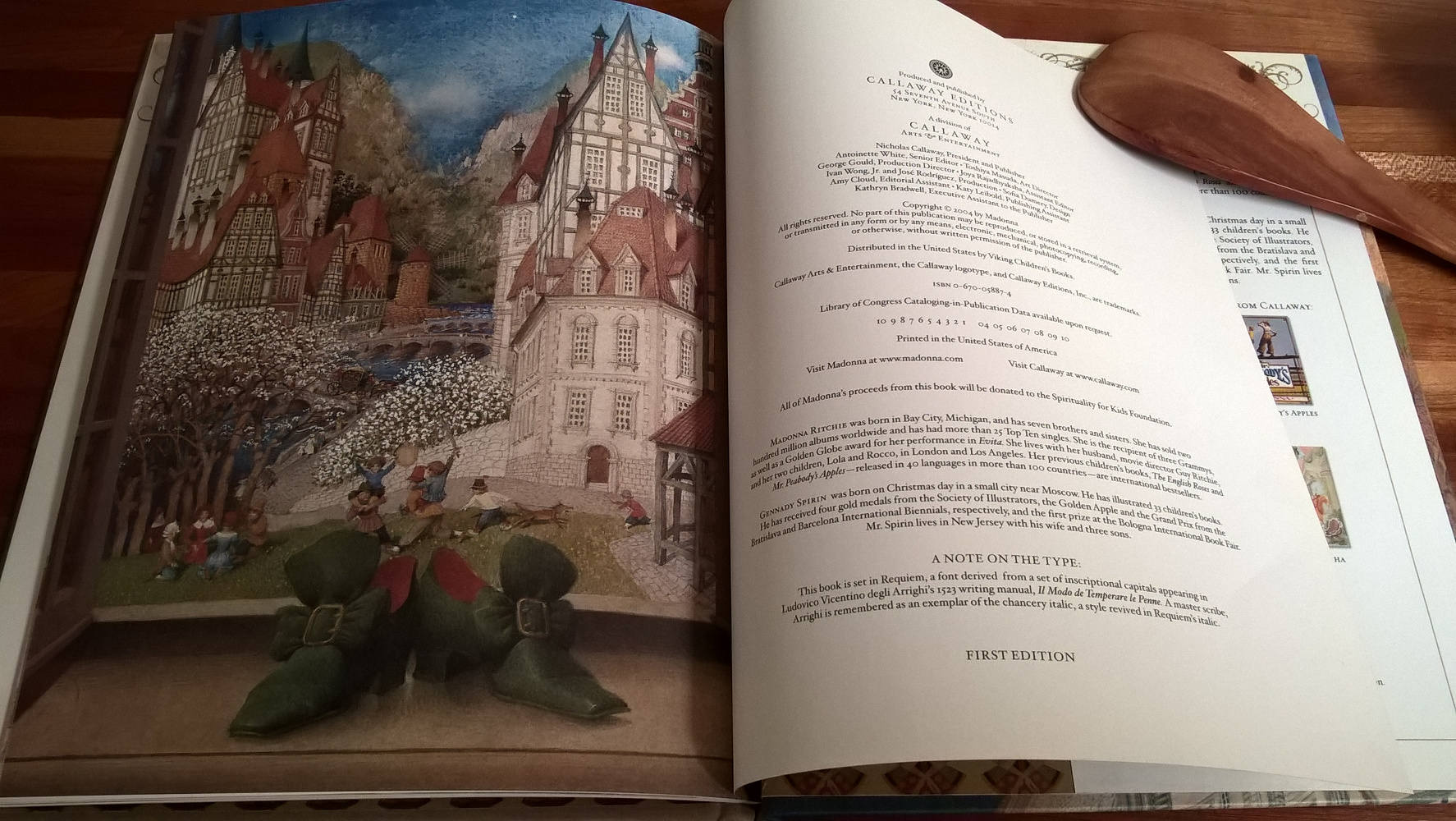 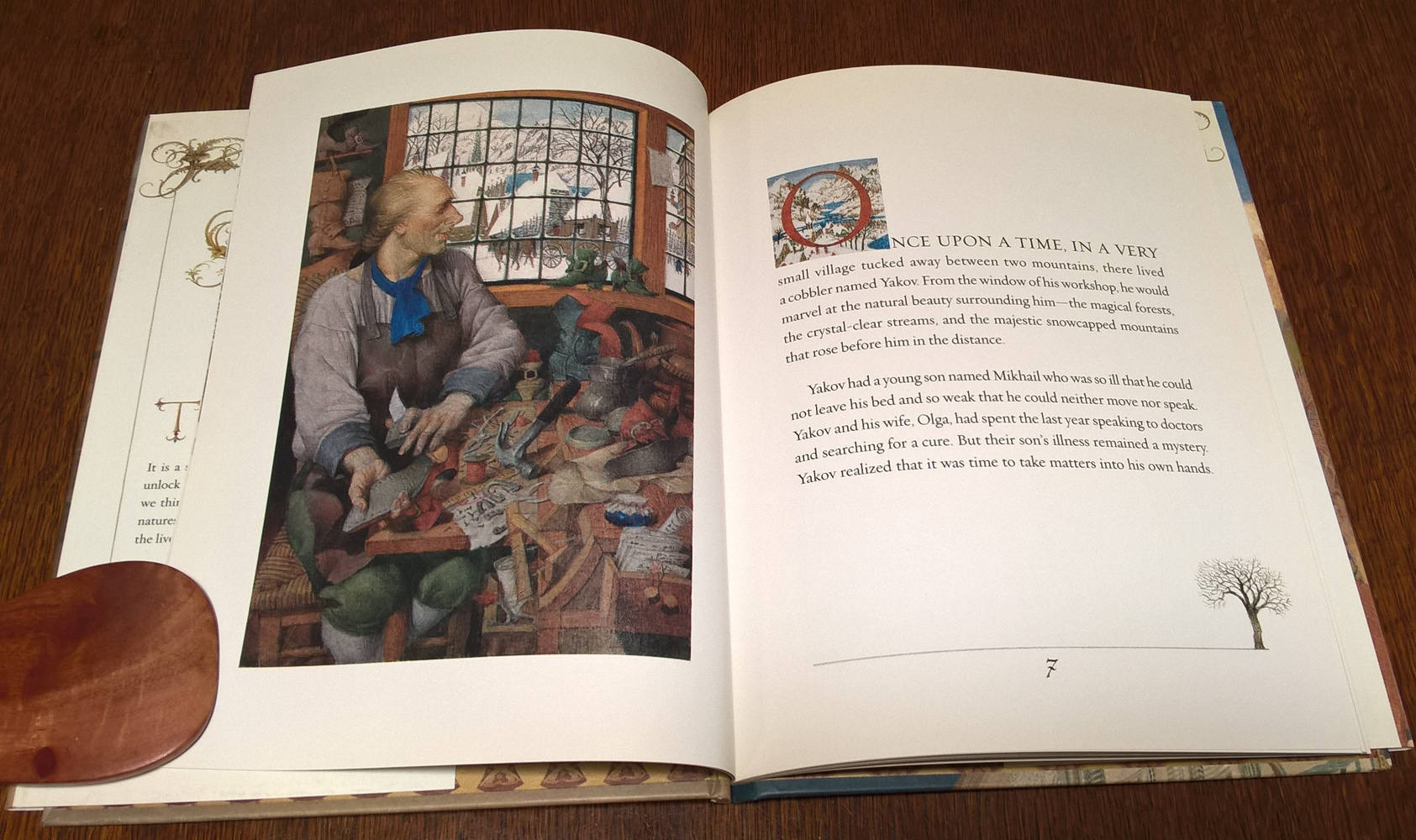 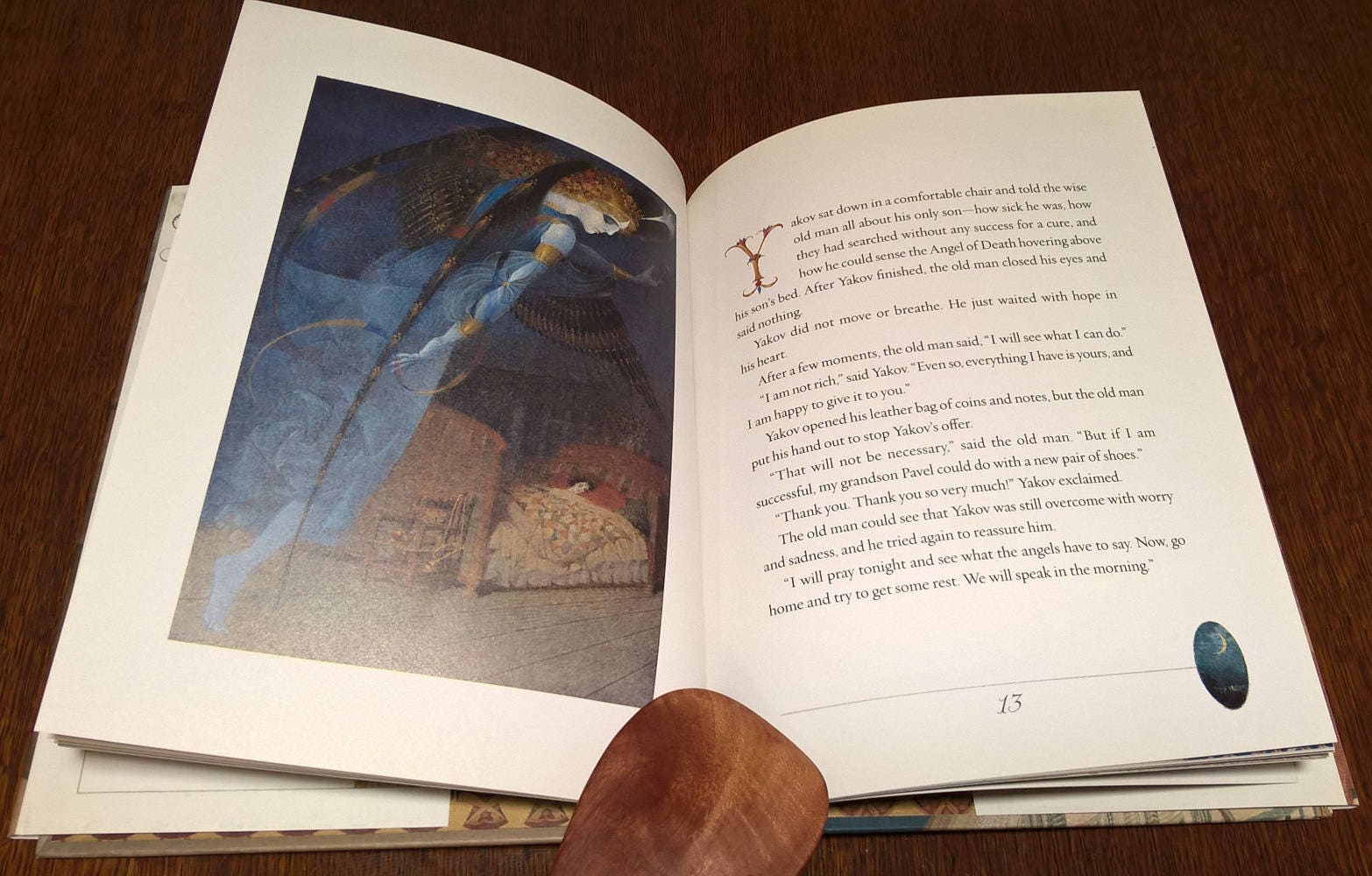 First edition of Yakov and The Seven Thieves by Madonna and Gennady Spirin: A father begs his village's wise man to help cure his son.

Yakov and Olga's son Mikhail is deathly ill and they fear he won't last through the night. Yakov gathers all their money, what little of it they possess, and goes to the home of a wise old man to beg his help. The old man, known for his ability to talk to the angels, refuses Yakov's money and promises to do his best. All he asks for is a pair of new shoes for his grandson Pavel.

The next day Yakov returns to sad news; the old man prayed for Mikhail but the gates of heaven remained locked. Yakov fell into tears. Feeling his sorrow, the old man sends Yakov home to rest and sends Pavel out to round up seven of the village's worst thieves and pickpockets. When he has them gathered together - Vladimir the Villain, Sadko The Snake, Boris the Barefoot Midget, Stinky Pasha, Petra the Pickpocket, Ivan the Arsonist, Igor the Tiger - he orders them to pray. A strange request, given the choir of fallen angels, but their prayers unlock the gates of heaven, and Mikhail lives.

Madonna writes of her story:

"This book was inspired by the Baal Shem Tov, a great teacher who lived in the Ukraine in the 18th century. It is a story about how all of us have the ability to unlock the gates of heaven no matter how unworthy we think we are. For when we go against our selfish natures, we make miracles happen, in our lives and in the lives of others. We must never forget that hidden behind a large amount of darkness is a large amount of light."

Other books by Madonna at The Charmed Bookshop:

Yakov and The Seven Thieves
Thecharmedbookshop.com/listing/552406439/yakov-and-the-seven-thieves-madonna

The Adventures of Abdi
Thecharmedbookshop.com/listing/618303753/the-adventures-of-abdi-by-madonna-olga

Condition*: Very Good/Fine. Two pages were once folded at the corners, or "dog-eared", else Fine condition.