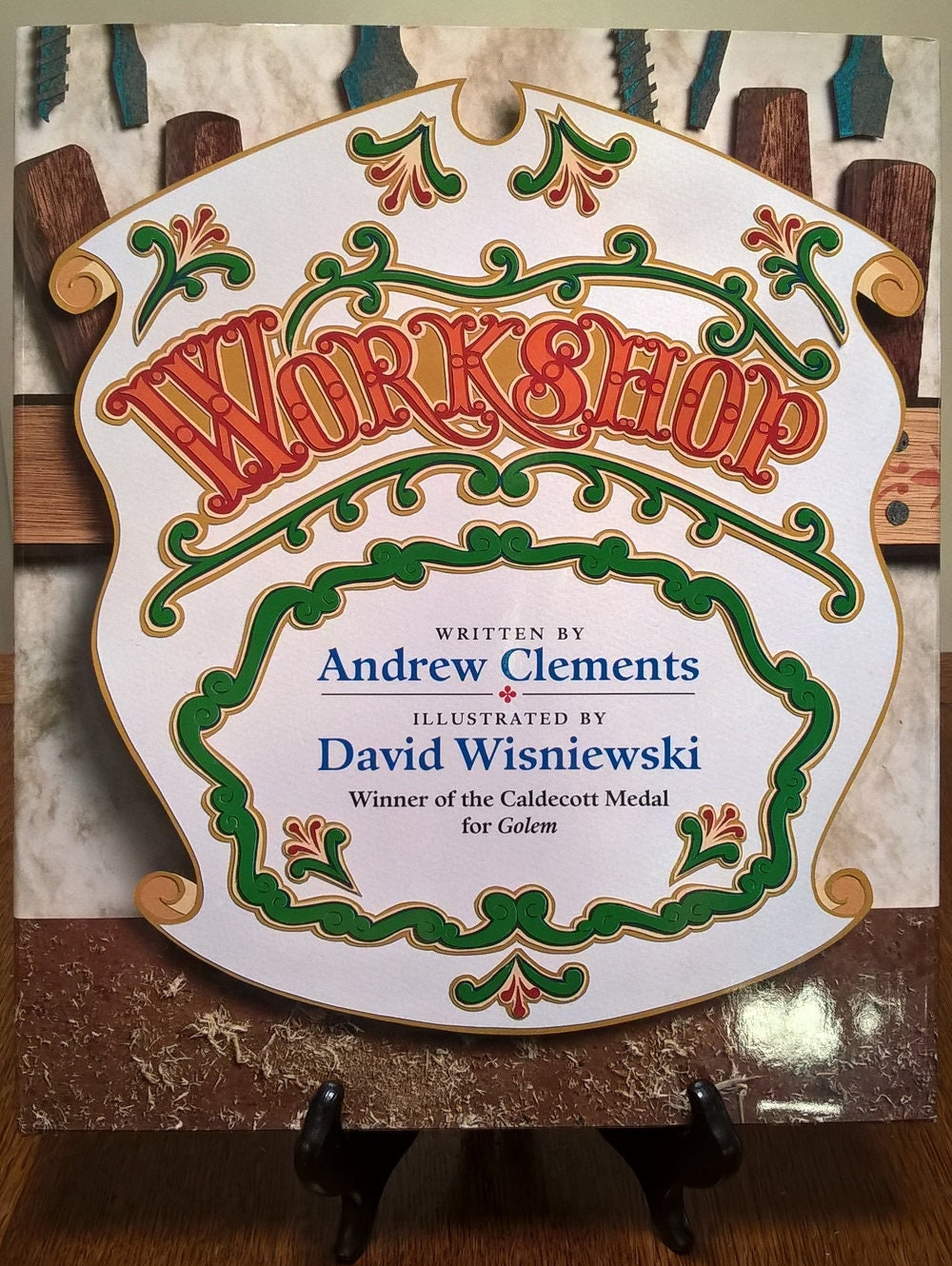 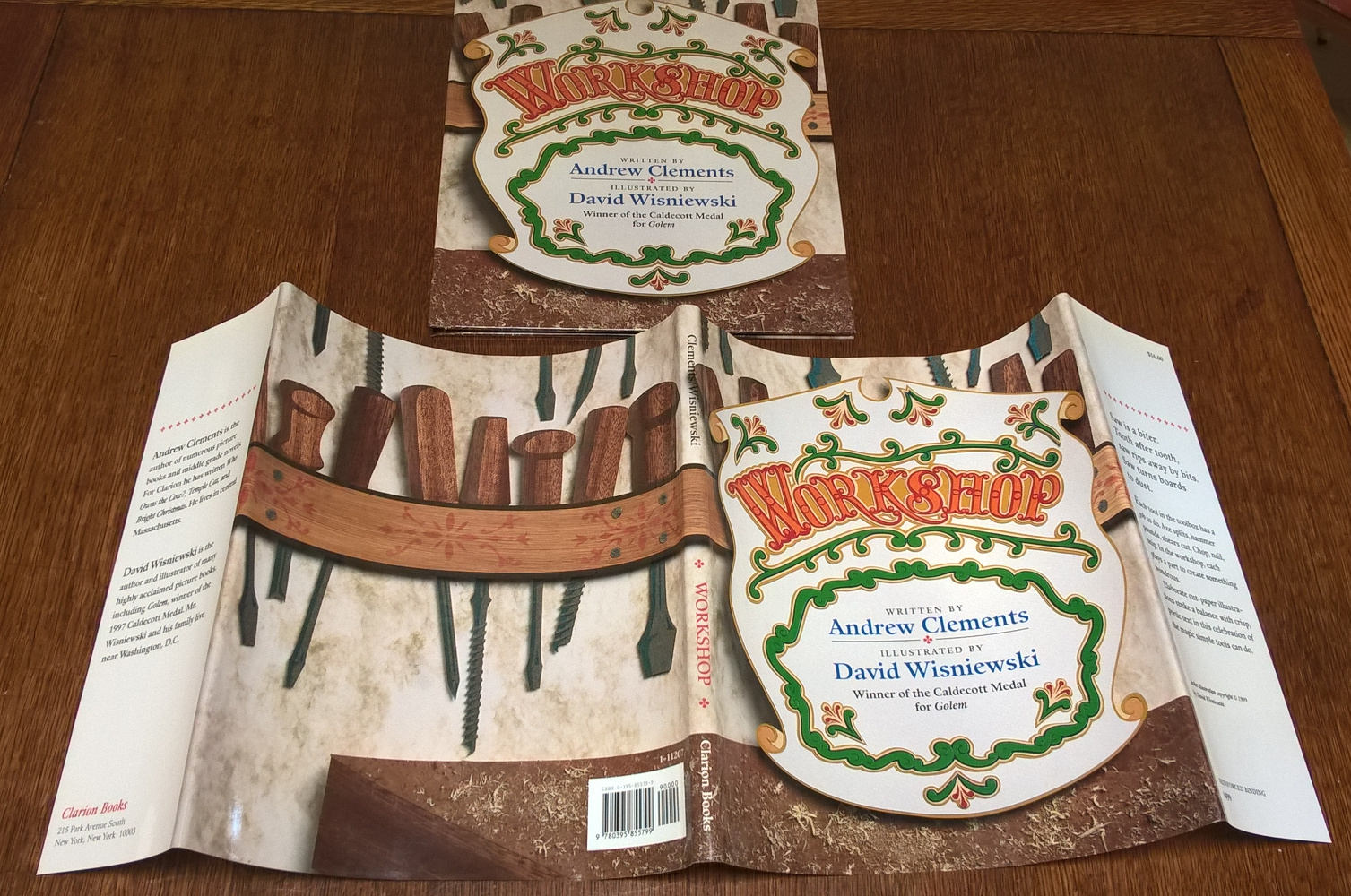 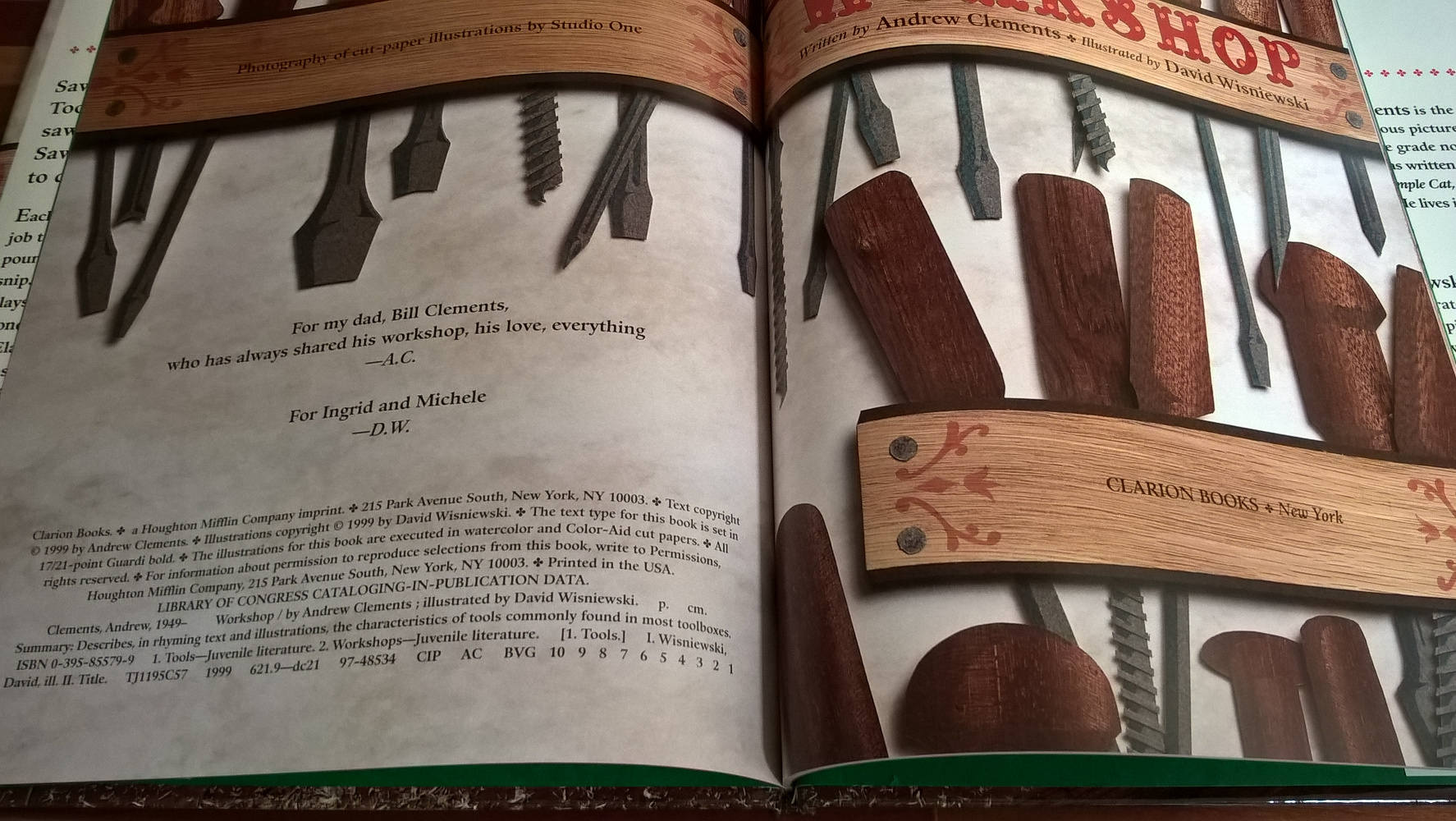 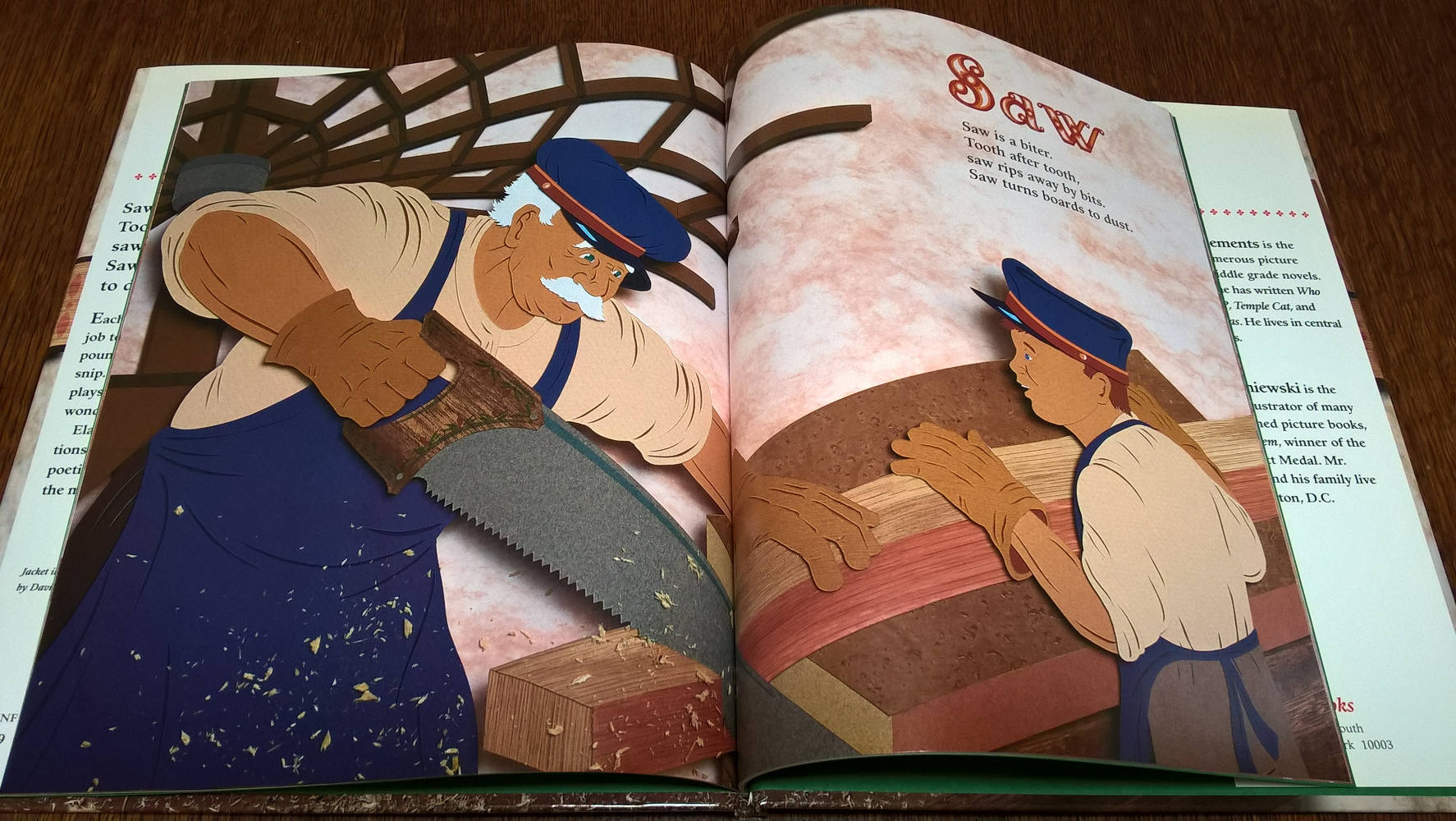 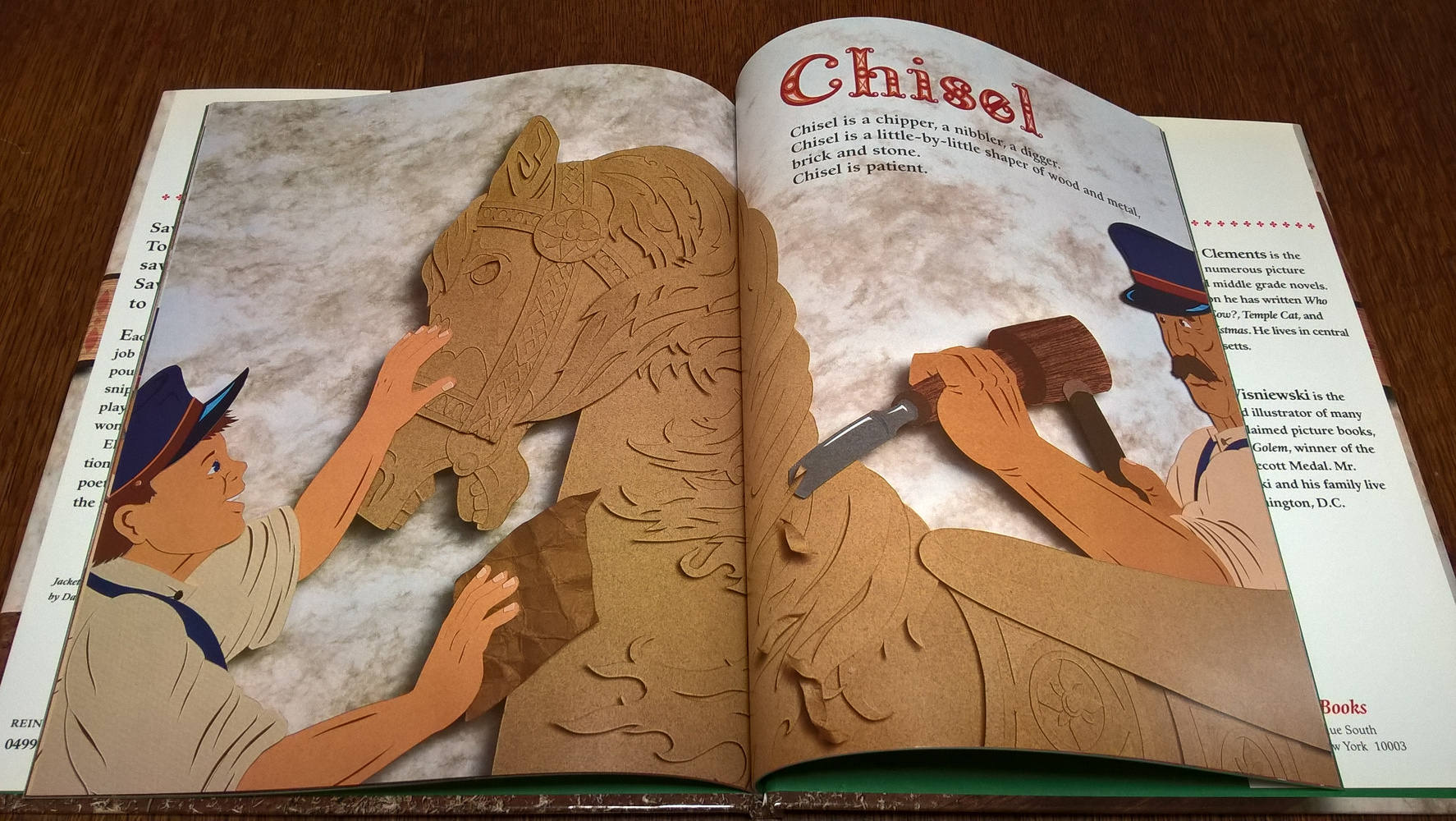 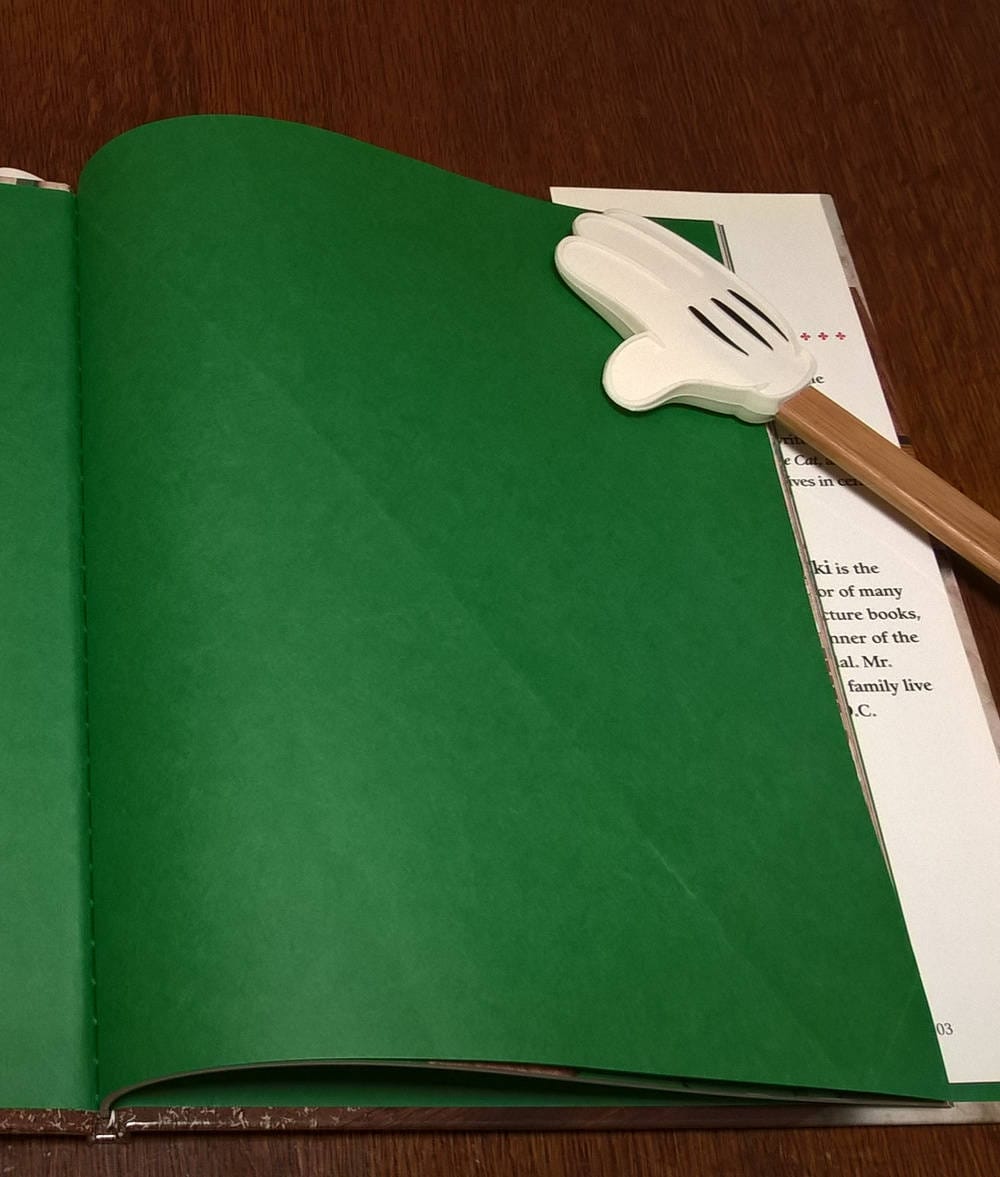 First edition of Workshop by Andrew Clements and David Wisniewski: Cut paper illustrates a carpenter and apprentice building a carousel.

The process of building this book is no less impressive than building a carousel.

Wisniewski (1953 - 2002) won the 1997 Caldecott Medal for Golem and also illustrated Elfwyn's Saga, Rain Player and The Wave of the Sea-Wolf, and The Secret Life of Grown-Ups.

An interview with Wisniewski in Publisher's Weekly:

"[Wisniewski's] closely observed settings are constructed from cut paper, which he slices into intricate overlapping filigrees and tacks into place with pieces of photo-mounting tape. Even the tiniest details, confetti-size snips that resemble opaque paint dots, are minuscule pieces of paper.

When beginning a project, Wisniewski first does a set of color sketches. He expands these pieces into black-and-white drawings. Later, he will use the sketches as carbon-paper transfers and as templates for his cutout shapes. Finally, he colors the black-and-whites, chooses a palette and orders colored paper. With the layout and color scheme finalized, Wisniewski sets about cutting and pasting units that will join together in coherent finished pieces."

Andrew Clements is an award-winning children's book author with an extensive booklist and a devoted fan base.

From a School Library Journal review:

"If you’re a children’s librarian then you are probably well and truly familiar with the gaps that consistently appear in the Andrew Clements portion of your fiction shelves. Talk about a guy who has made his name memorable to kids. If they’re not devouring School Story then they’re giggling over No Talking or A Week in the Woods. And it all started with Frindle. A little book. A little idea. A title that never received an ALA Awards and yet is one of the most memorable titles to be released in the last 15 years."

Condition*: Very Good/Fine. The front endpaper was folded, as shown in the photo.