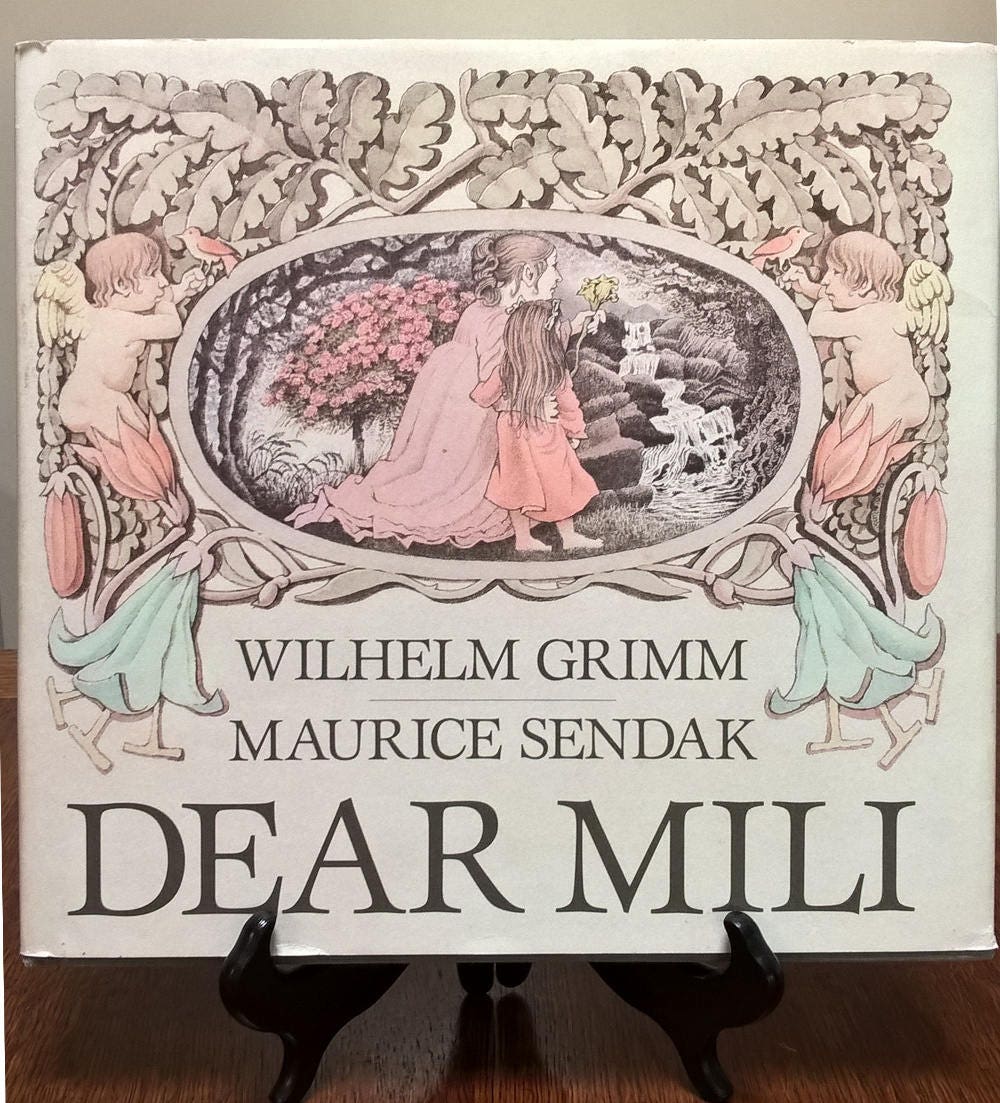 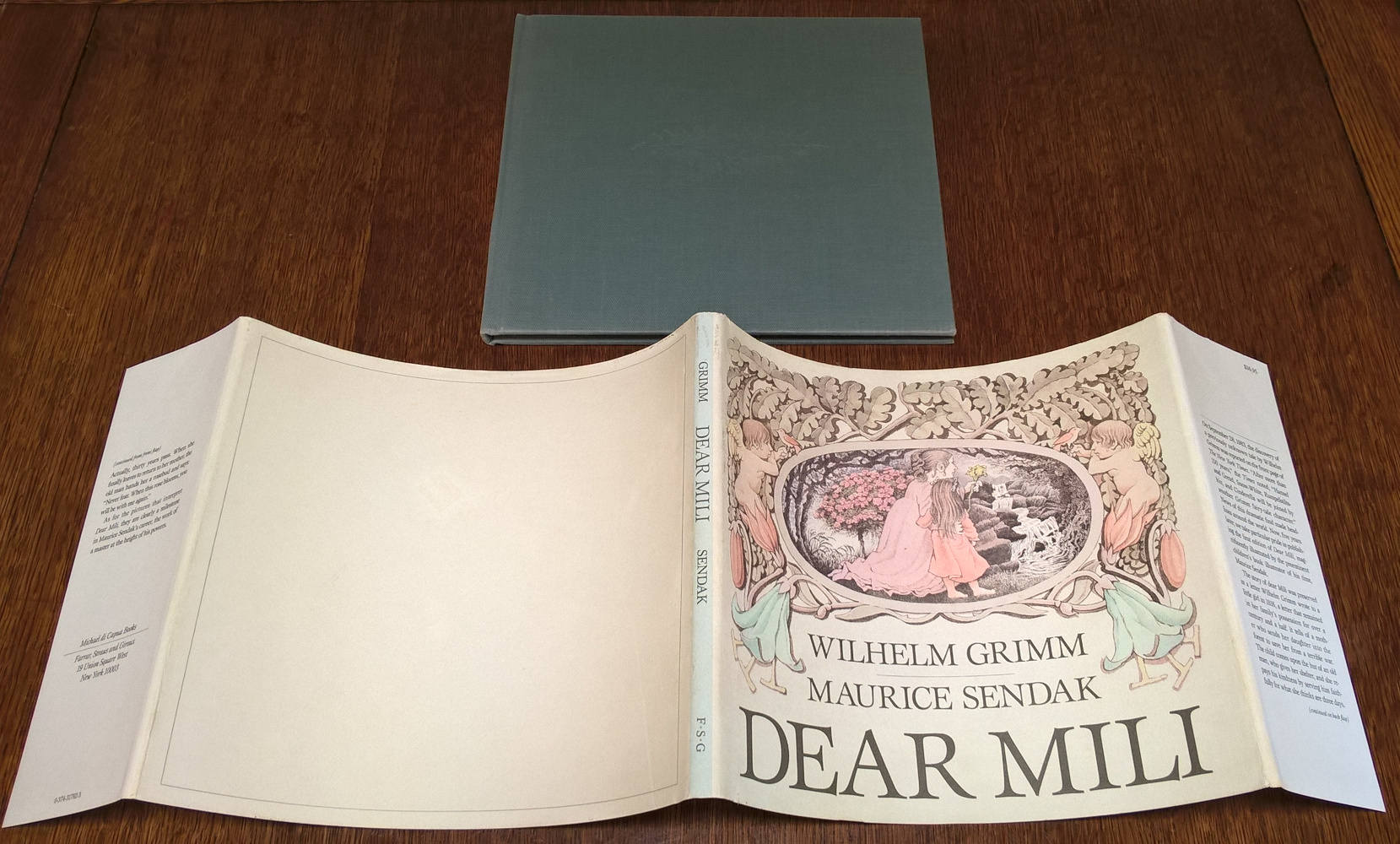 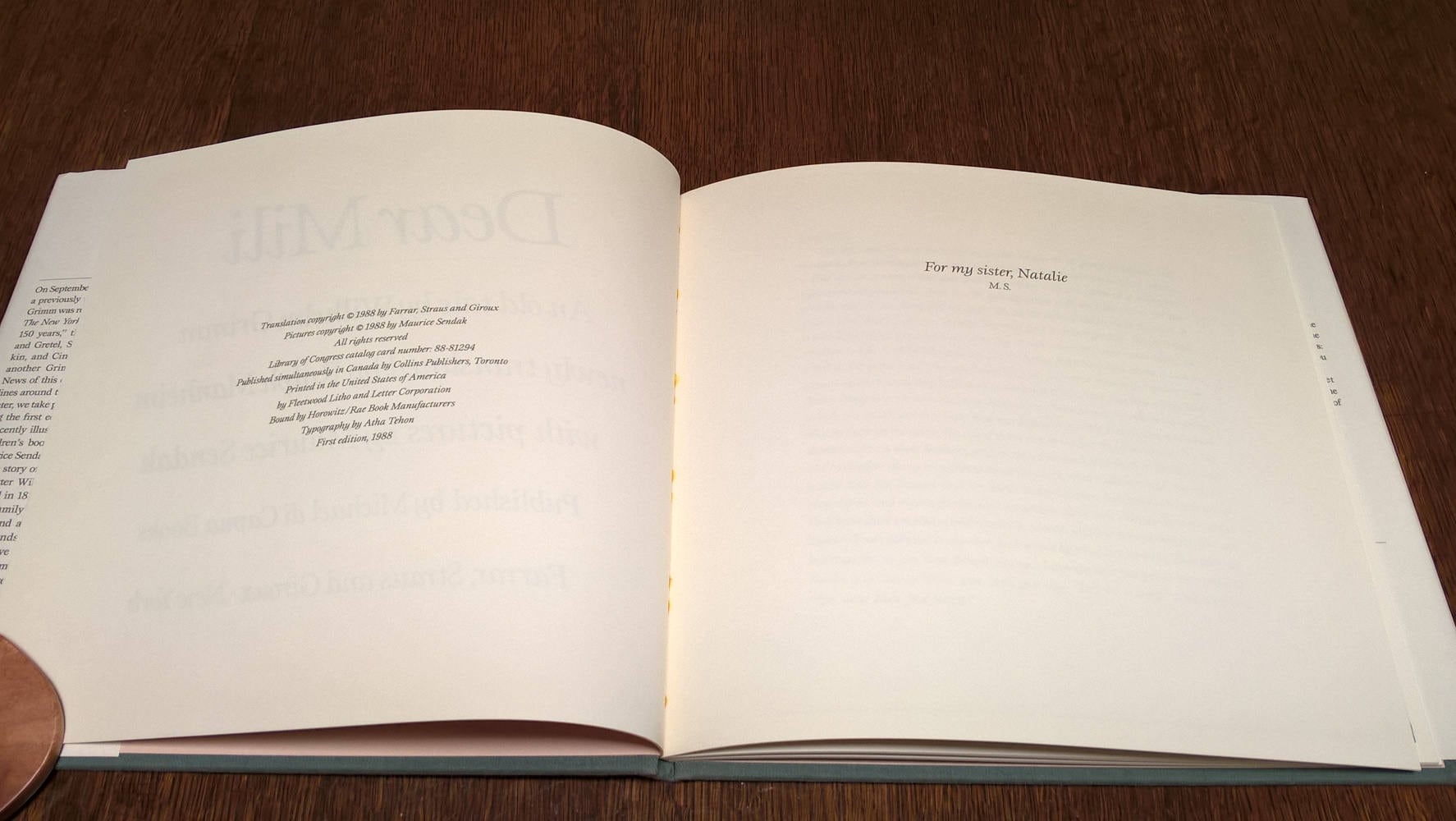 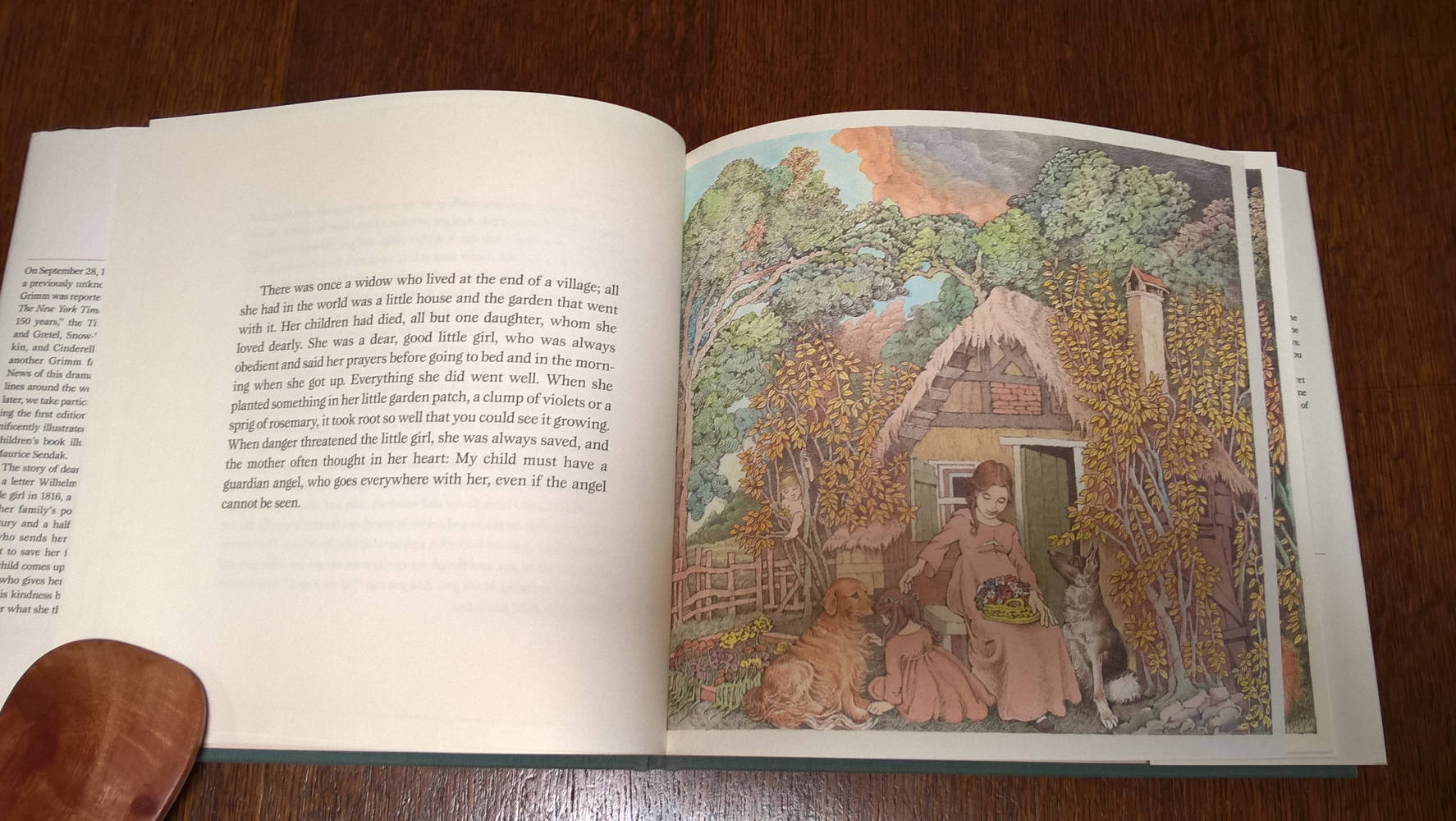 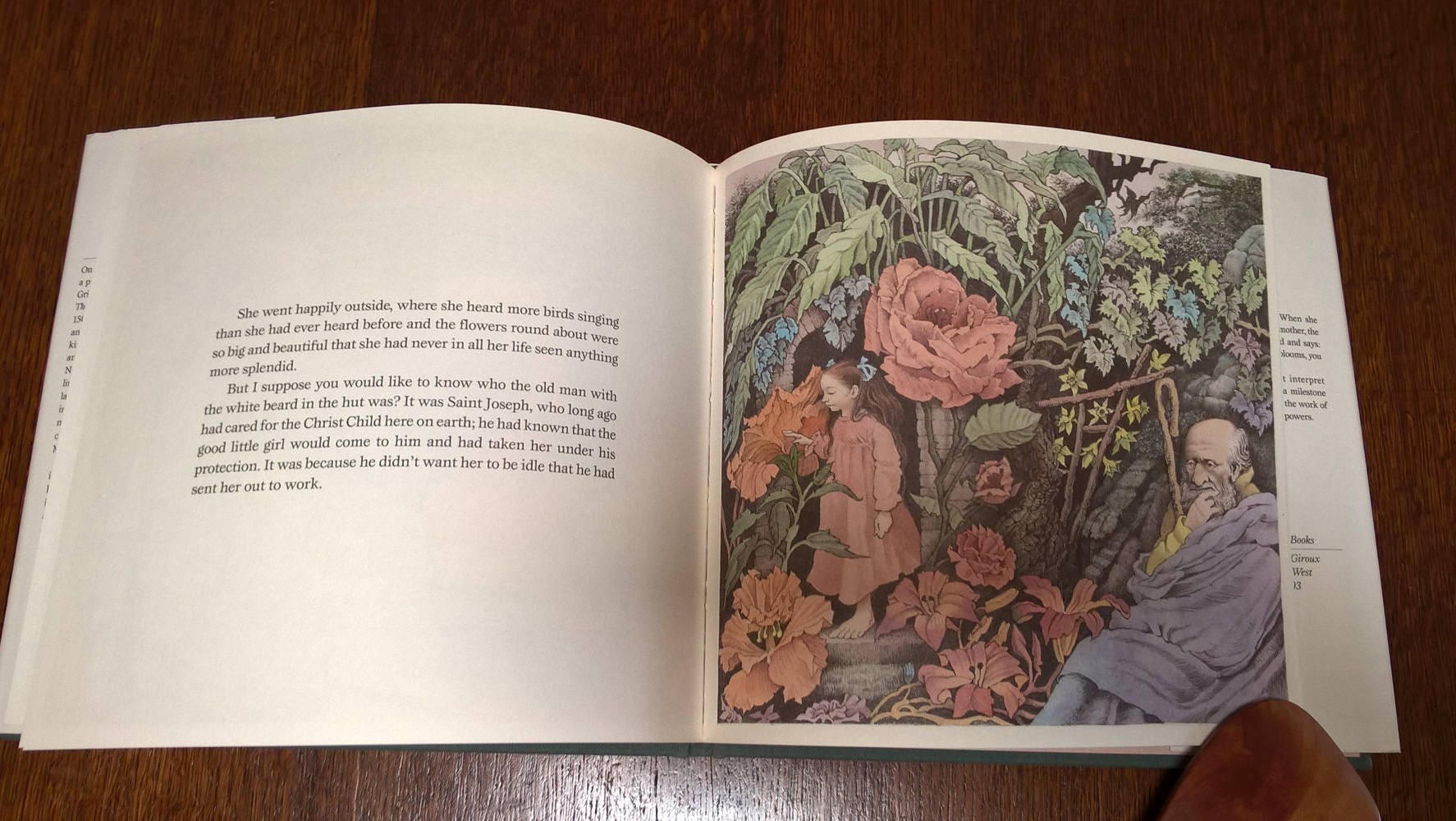 First edition of Dear Mili, a long-lost story by Wilhelm Grimm written for his daughter, illustrated in 1988 by Maurice Sendak, who did some of his finest work for Dear Mili.

In 1983, a previously unknown story written by Wilhelm Grimm, of the Brothers Grimm, was purchased at auction by publishing company Farrar, Straus and Giroux, 167 years after Wilhelm wrote to "Dear Mili".

An article from the NY Times tells of how the manuscript found its way from Mili's family in Germany to a New York auction house, and summarizes Wilhelm's story:

"The story tells of a mother who sends her daughter into the woods to save her from impending war. The unnamed child, variously referred to as ''the child,'' ''the good child,'' ''the poor child'' and ''dear child,'' is led by her guardian angel to the hut of an old man who gives her shelter, and whose kindness she repays by serving him faithfully for what she thinks are three days but which are actually 30 years. When she finally leaves, he reveals himself to be St. Joseph and gives her a rosebud, saying that she will return when it is fully bloomed.

The guardian angel returns the child to her aged and still heartbroken mother. ''They sat together the whole evening in great joy, then went to bed serenely and calmly,'' the story says, ''but the next morning the neighbors found them both dead; they had blessedly departed this life, and between them lay the rose of St. Joseph in full bloom.''

Farrar, Straus commissioned Maurice Sendak to illustrate "Dear Mili", published the following year, and it is one of his finest works.

"''Dear Mili'' is among Mr. Sendak's finest creations. If one hesitates to call him the foremost illustrator in contemporary America, or the most accomplished draftsman, it is only because those terms set too narrow a limit on the nature of his achievement. He is an artist, nothing less; an artist with a powerful vision."

Condition*: Fine/Very good. The dust jacket has faint soiling on the back, a small shadow from a label (no remaining adhesive), and the beginnings of a closed tear on the head and tail of the spine.