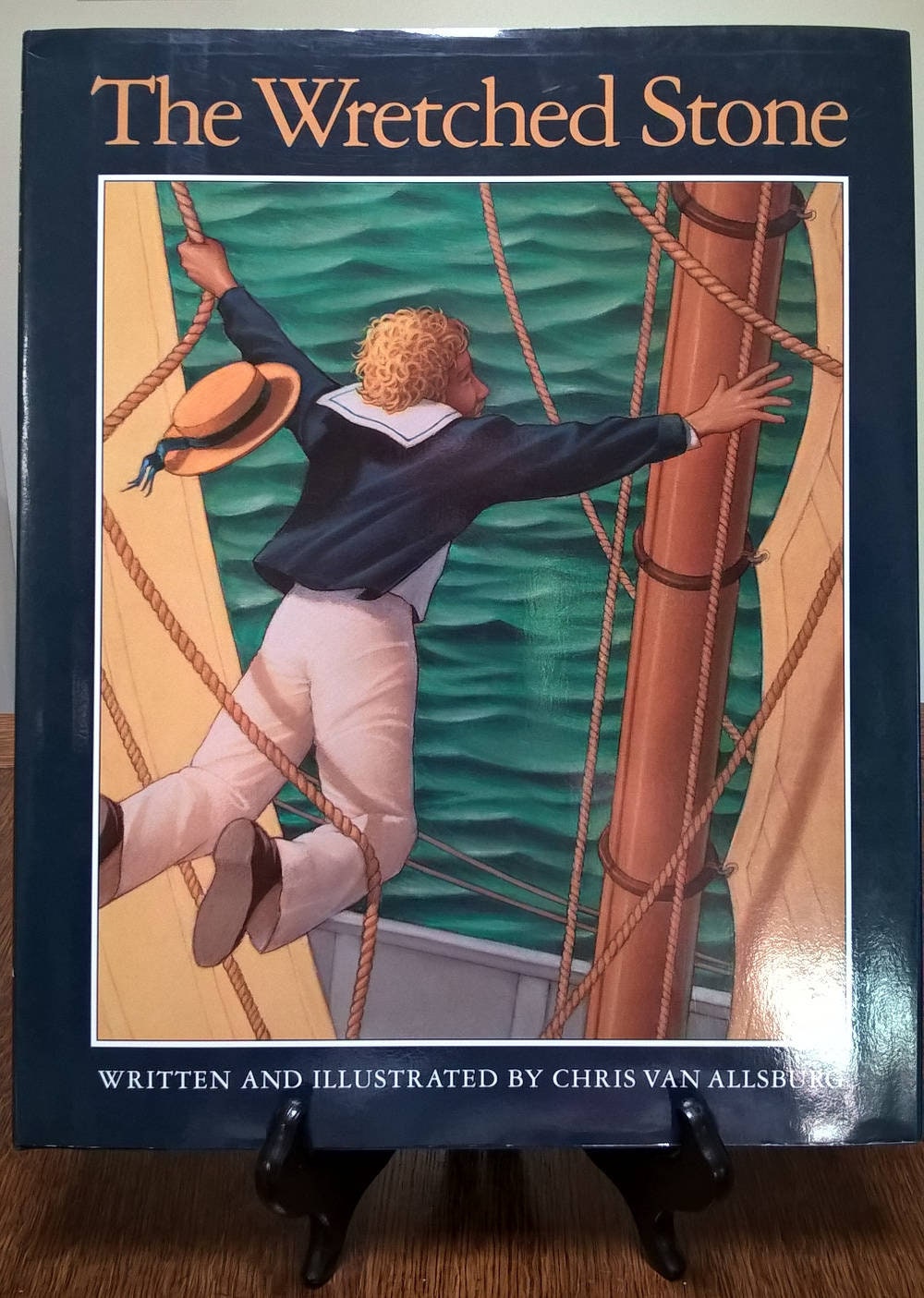 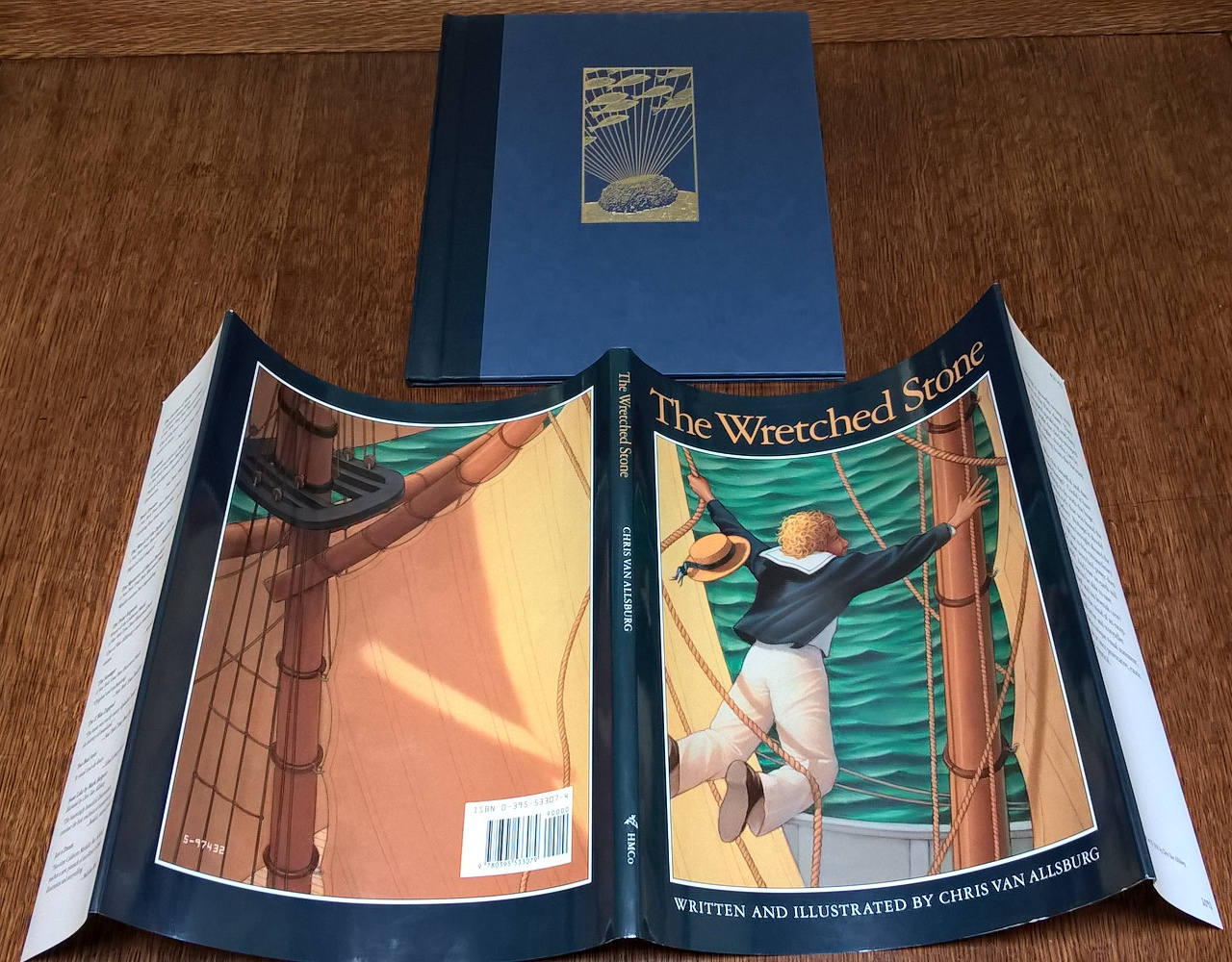 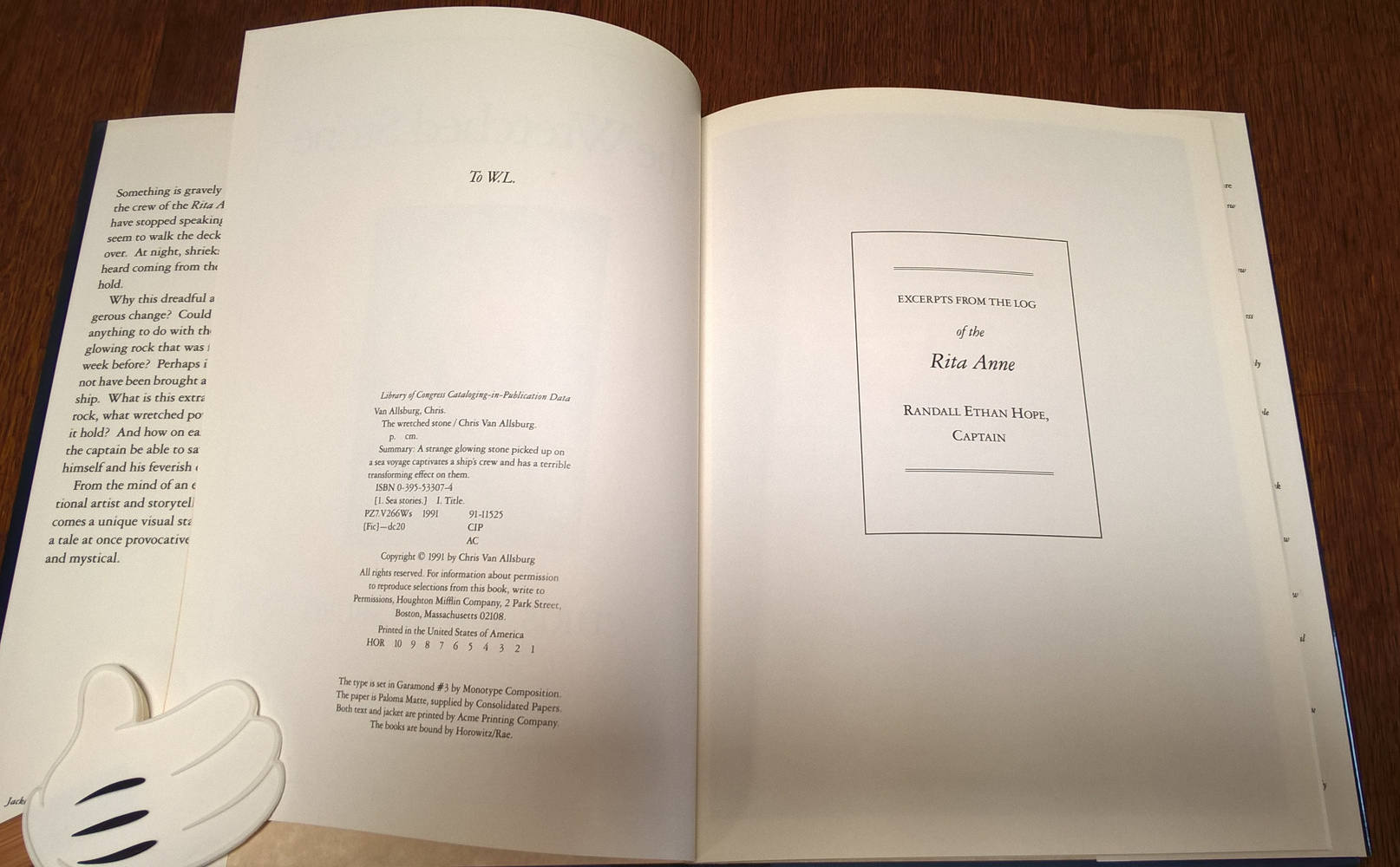 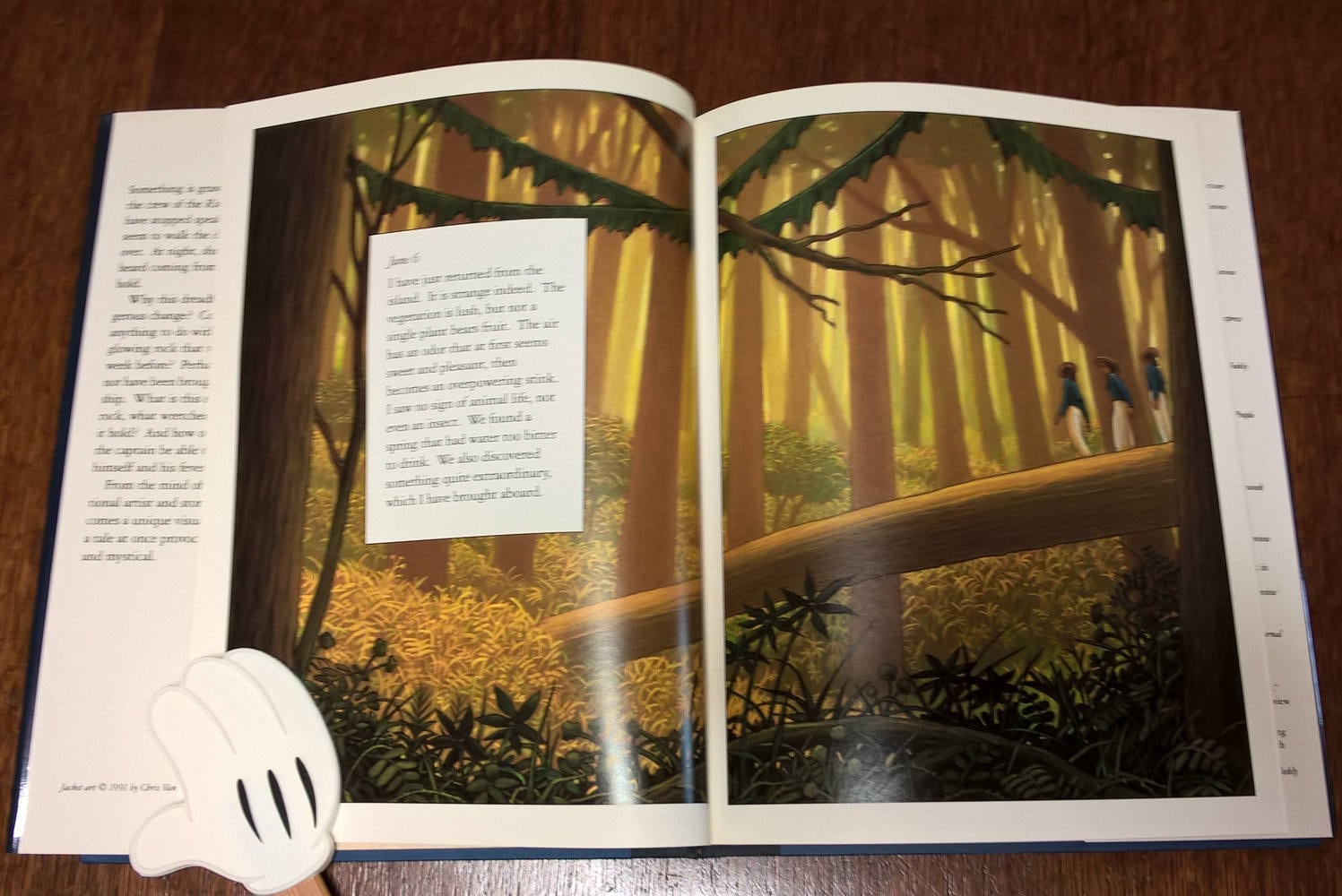 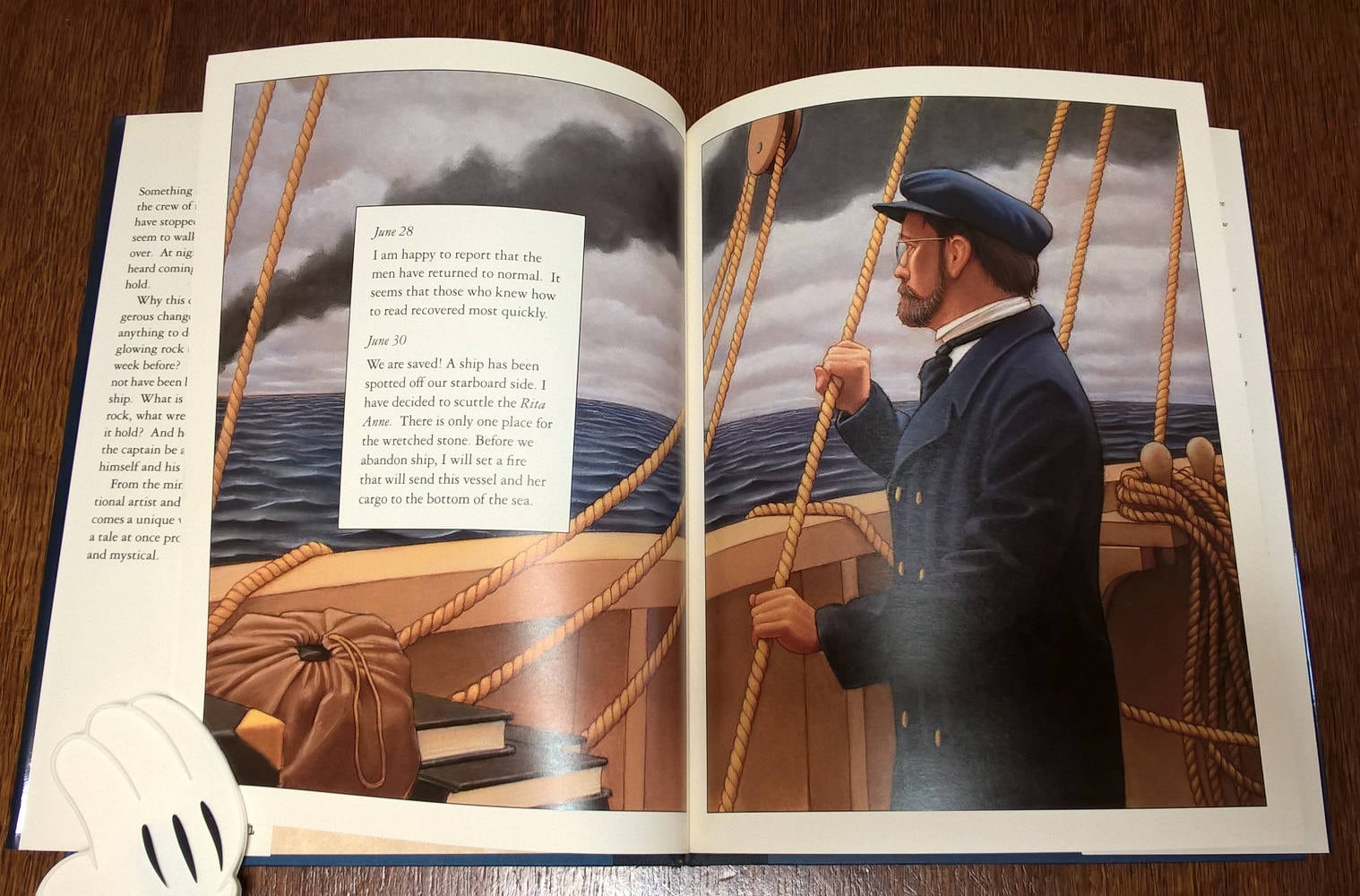 First edition of The Wretched Stone, Chris Van Allsburg takes us aboard the Rita Anne to discover the stone's strange effect on the ship's captain and crew.

Chris Van Allsburg is my favorite children's book illustrator, and The Wretched Stone is sly fun.

Captain Randall Ethan Hope reports in his ship's log from June 6 that all's well aboard the Rita Anne after stopping at an uncharted island to forage for provisions:

"I have just returned from the island. It is strange indeed. The vegetation is lush, but not a single plant bears fruit. The air has an odor that at first seems sweet and pleasant, then becomes a overpowering stink. I saw no sign of animal life, not even an insect. We found a spring that had water too bitter to drink. We also discovered something quite extraordinary, which I have brought aboard."

"Something is wrong with the crew..."

"This morning I awoke to find the deck deserted. The wheel was tied steady with a rope. I believe Mr. Howard, who spent some time around the rock, told the men about my plan to get rid of it. They have now locked themselves in the forward hold. They apparently believe, in their feverish state, that I can sail this boat alone while they sit around that wretched stone."

You may understand Van Allsburg's message by substituting any distracting annoyance, namely television, for the stone.

Chris Van Allsburg is an outstanding Caldecott award-winning artist and a favorite at The Charmed Bookshop, as author of The Garden of Abdul Gasazi, Jumanji, The Polar Express, and many other great children's books.