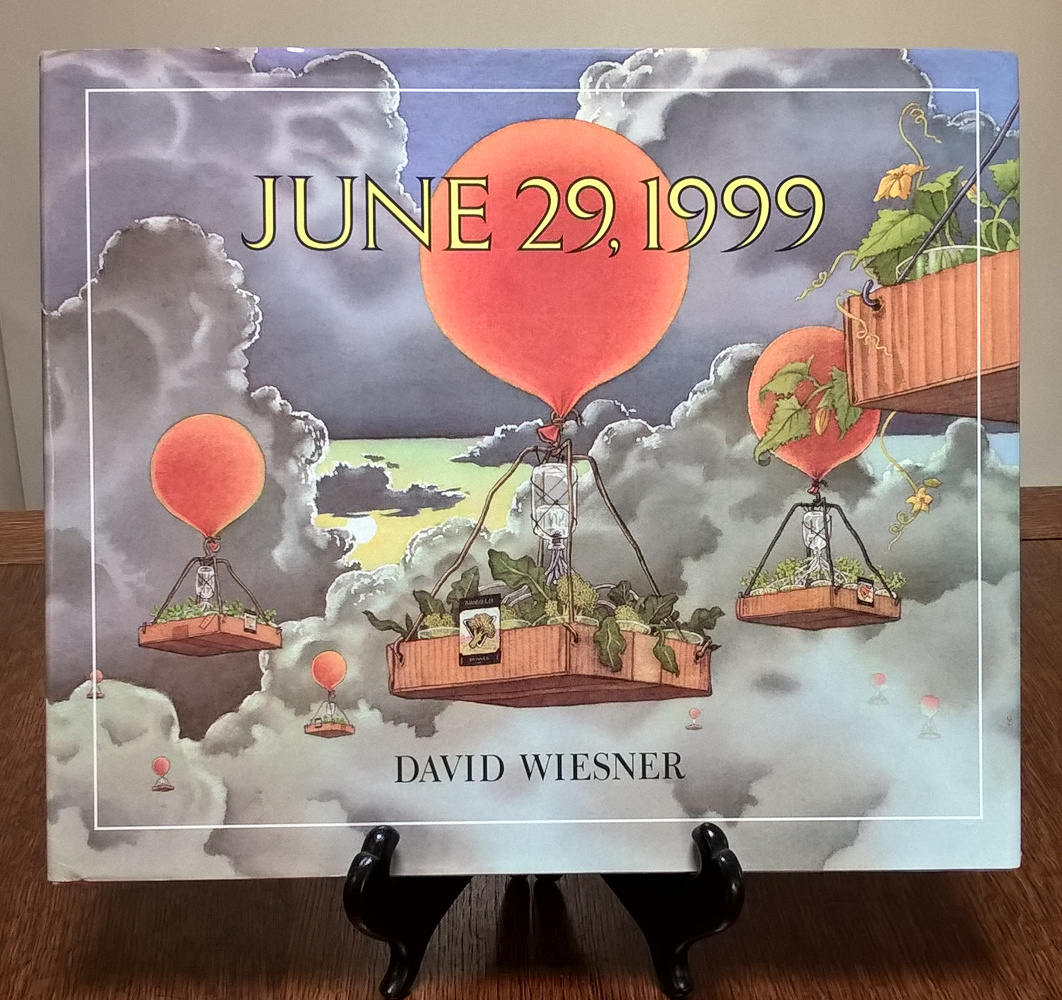 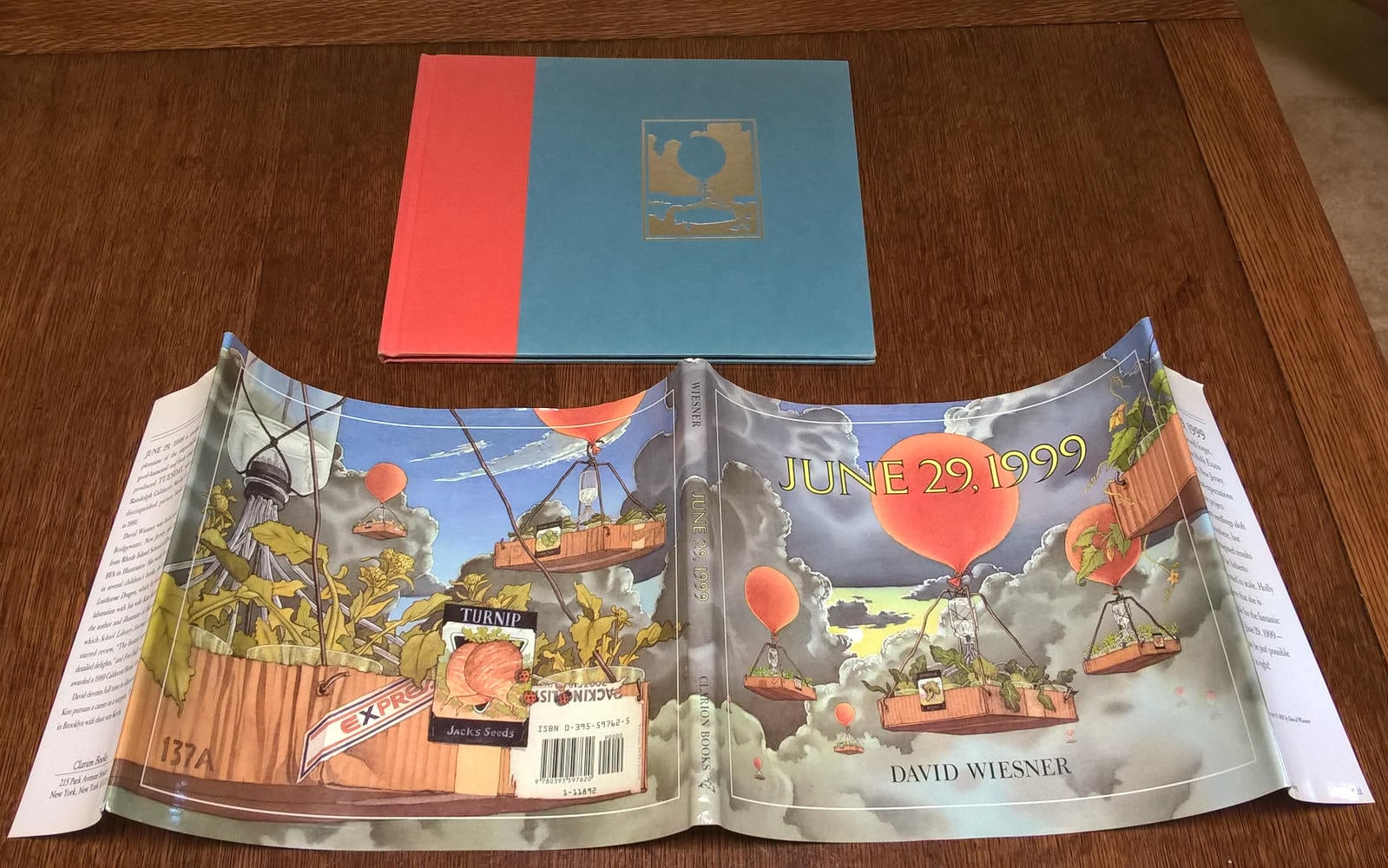 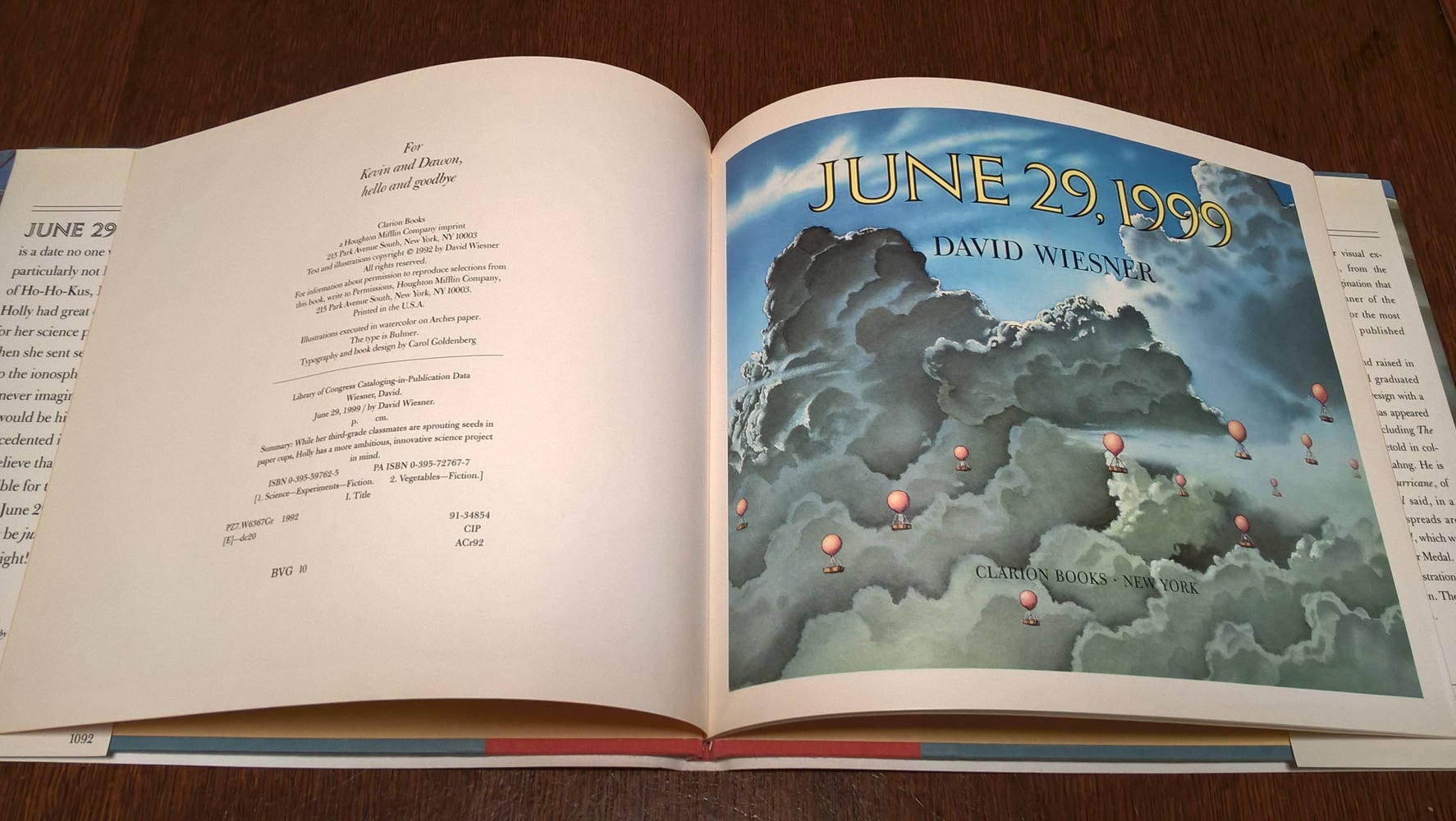 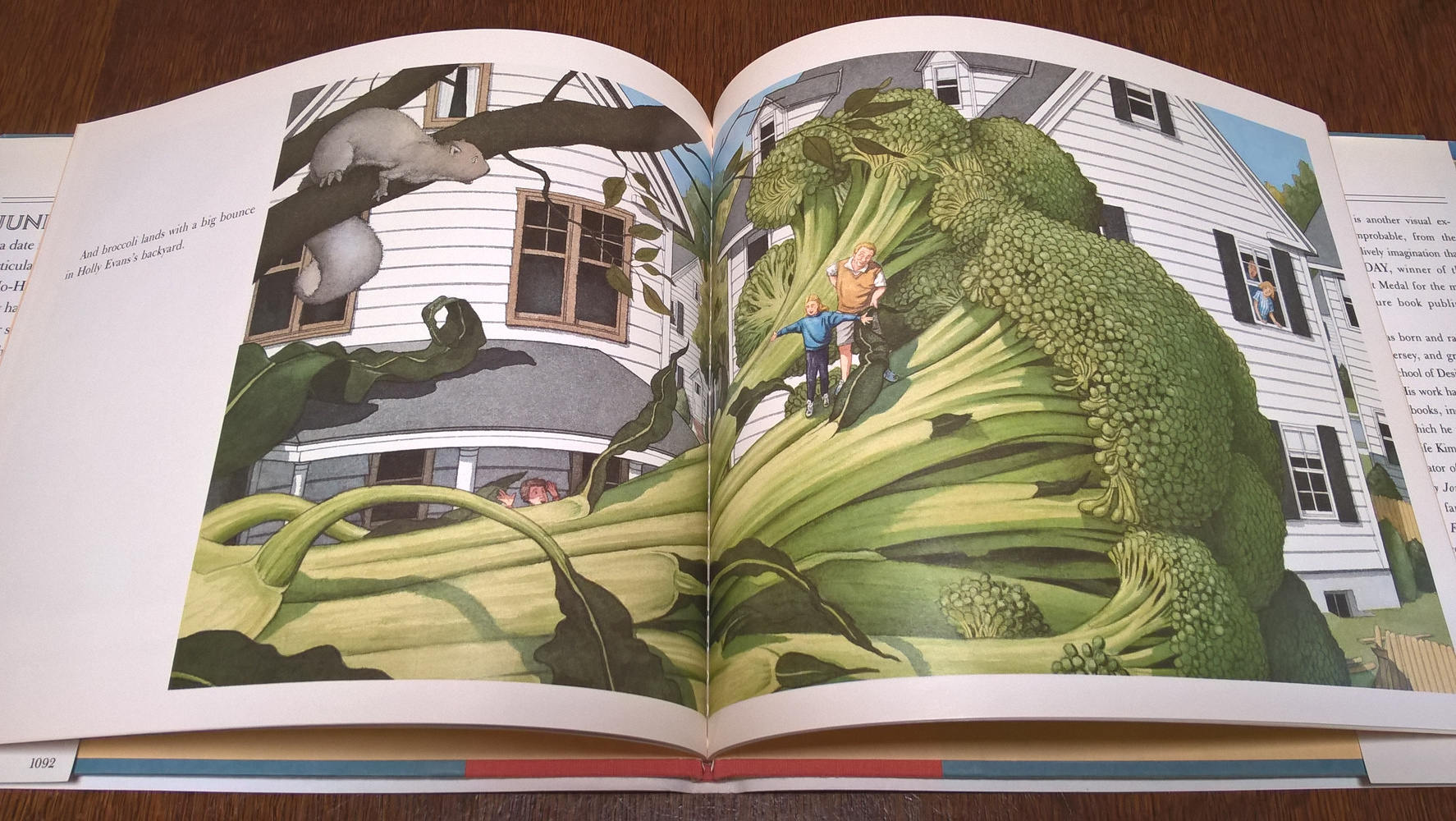 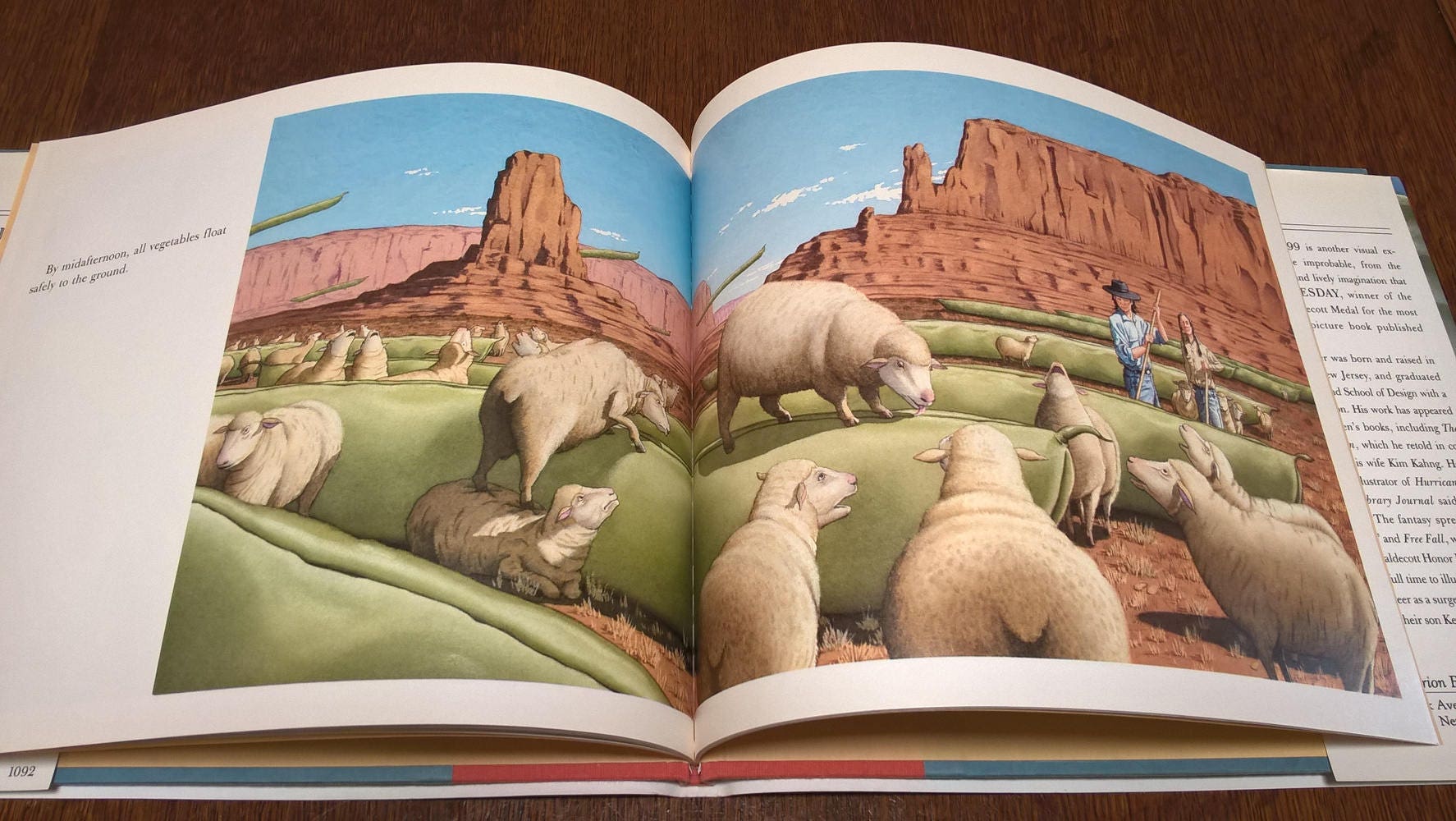 I love imaginative, fantastical stories that make you stop and wonder, and this one begins with Holly Evens launching her science project into space:

"The place is Ho-Ho-Kis, New Jersey. The year is 1999. On May 11, after months of careful research and planning, Holly Evens launches vegetable seedlings into the sky.

"On May 18, the young scientist reports on her experiment. Holly intends to study the effects of extraterrestrial conditions on vegetable growth and development. She expects the seedlings to stay aloft for several weeks before returning to earth.

"Her classmates are speechless.

"The date is June 29. Shortly after sunrise, a member of the Billings, Montana, Moose Lodge, hiking through the Rocky Mountains, makes a startling discovery.

"Robert Bernabe is in a daze when he returns to camp. All he can say for the next several hours is, "TURNIPS!".

"All over the country, the skies fill with vegetables."

But there's a mystery - the arugula, eggplant, avocado, and rutabaga weren't part of Holly's experiment. How did they get here! You'll have to ask the Arcturians, who just happened to be passing by Earth at the time.

David Wiesner has been awarded three Caldecott Medals: Tuesday, The Three Pigs, Flotsam, a Caldecott Honor award for Free Fall, and a two-time runner up for Sector 7 and Mr. Wuffles!. Marcia Brown is the only other writer/illustrator to win three Caldecotts.

Condition*: Near Fine/Near Fine. The dust jacket has a slight bump on the back, bottom left corner. The back fly leaf was once accidentally folded (as opposed to dog-eared).