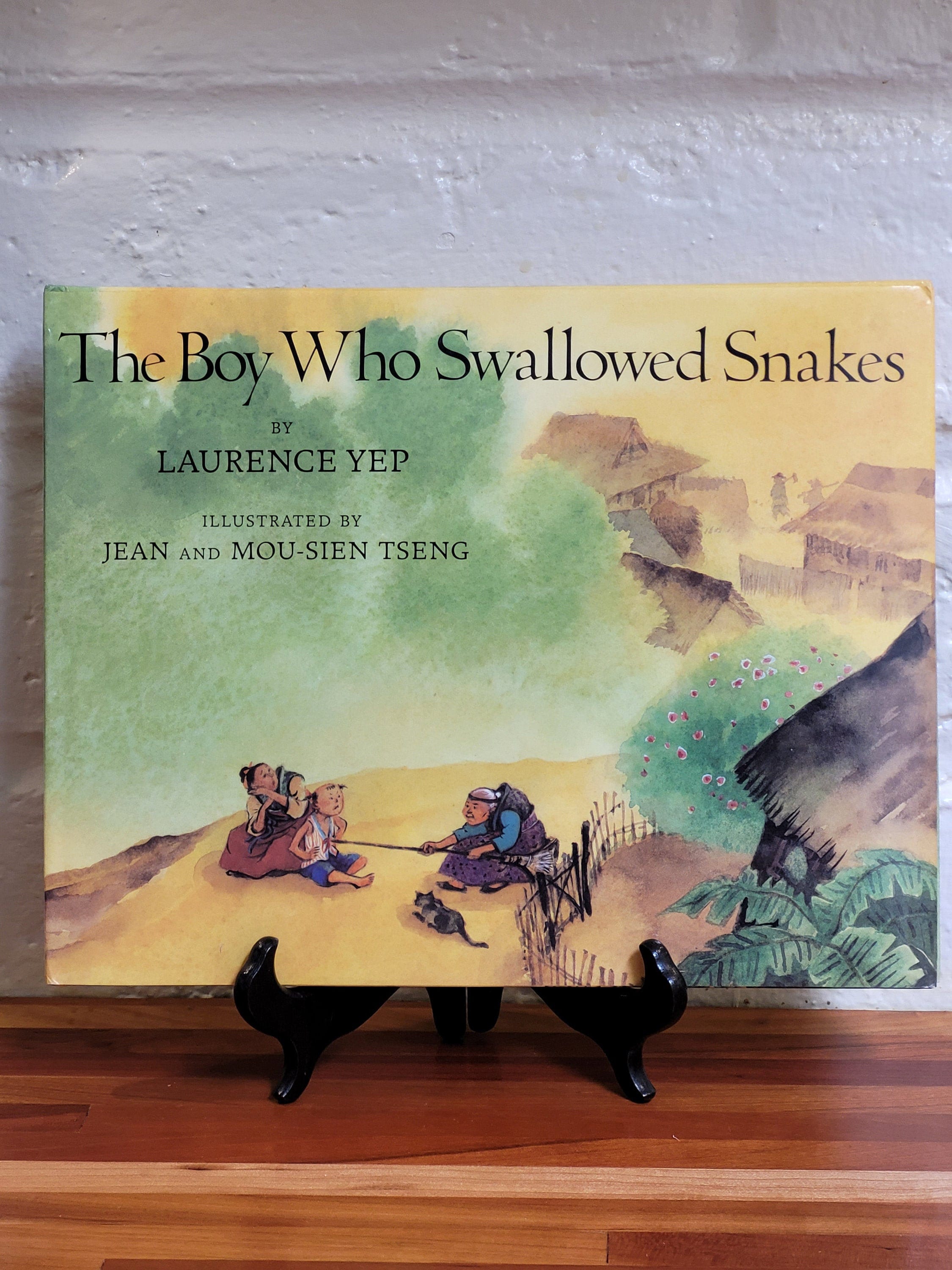 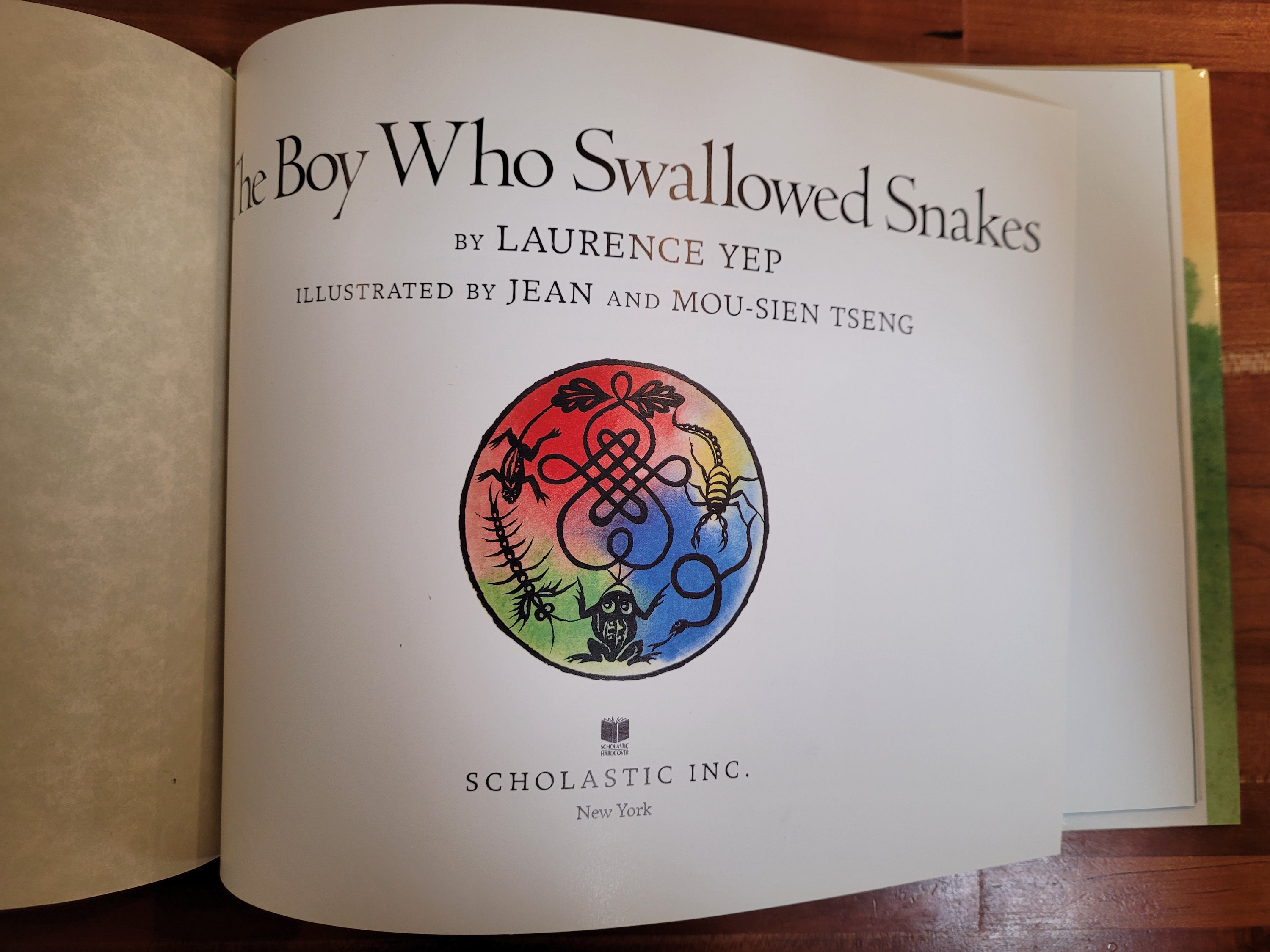 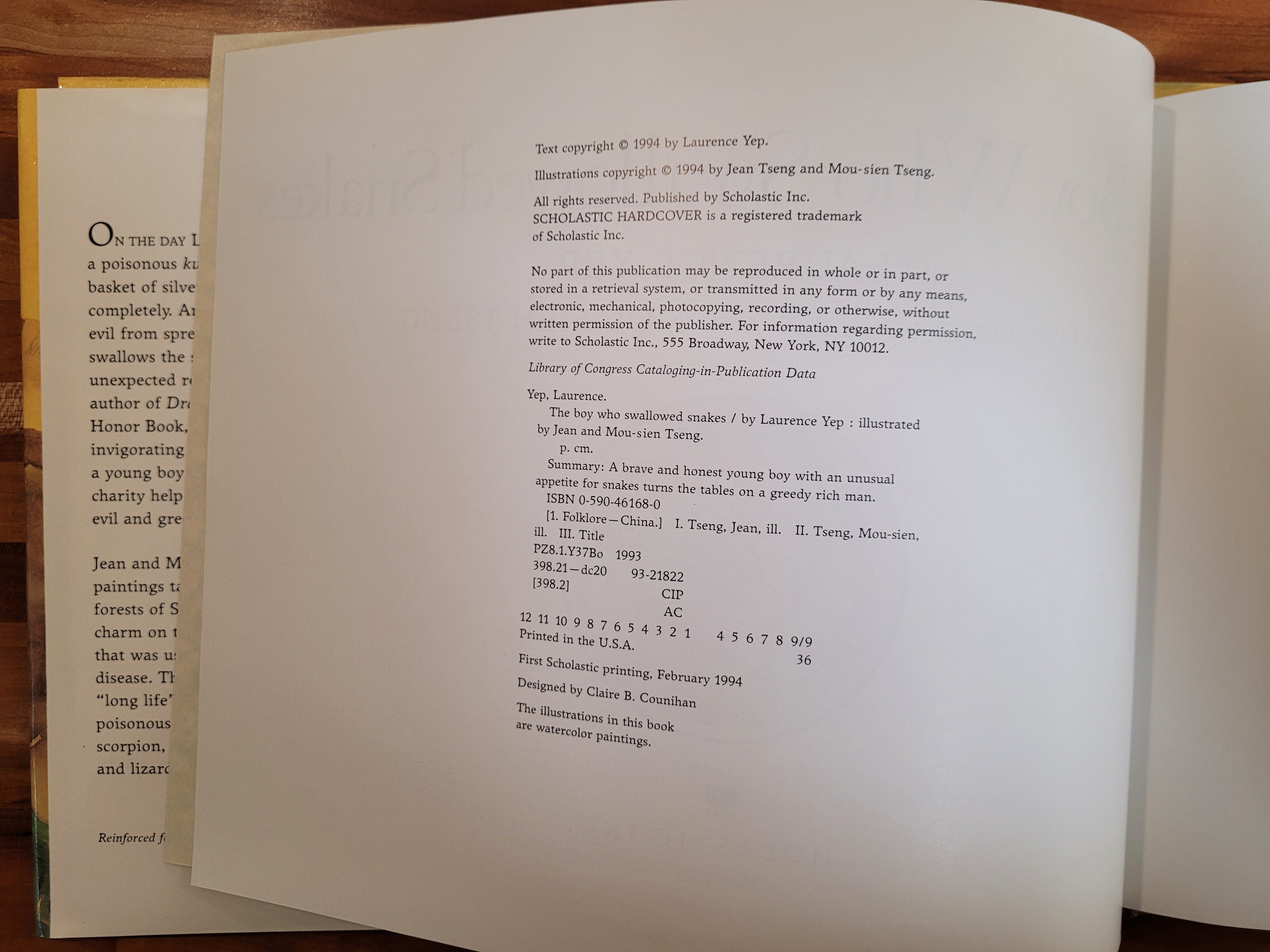 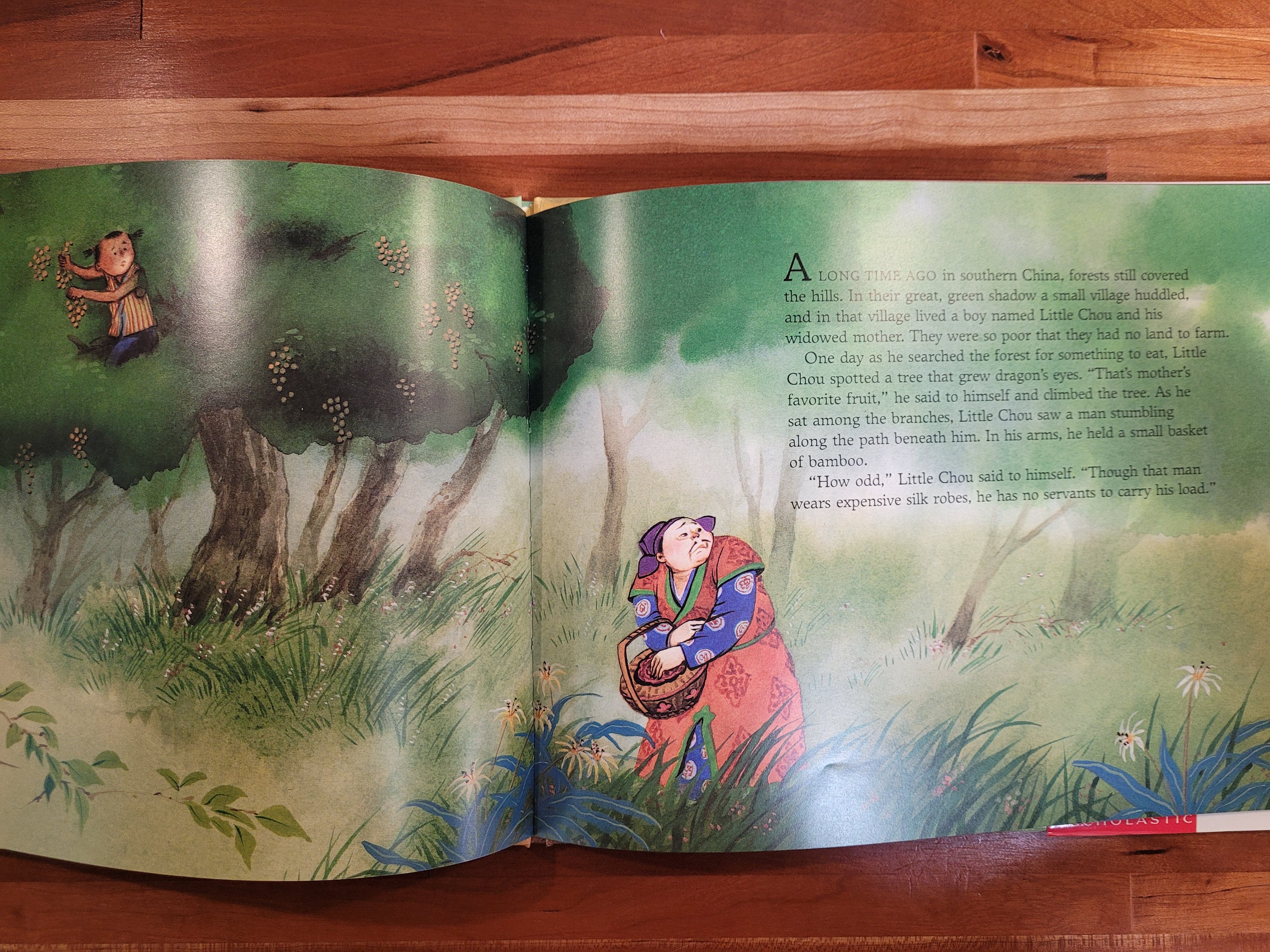 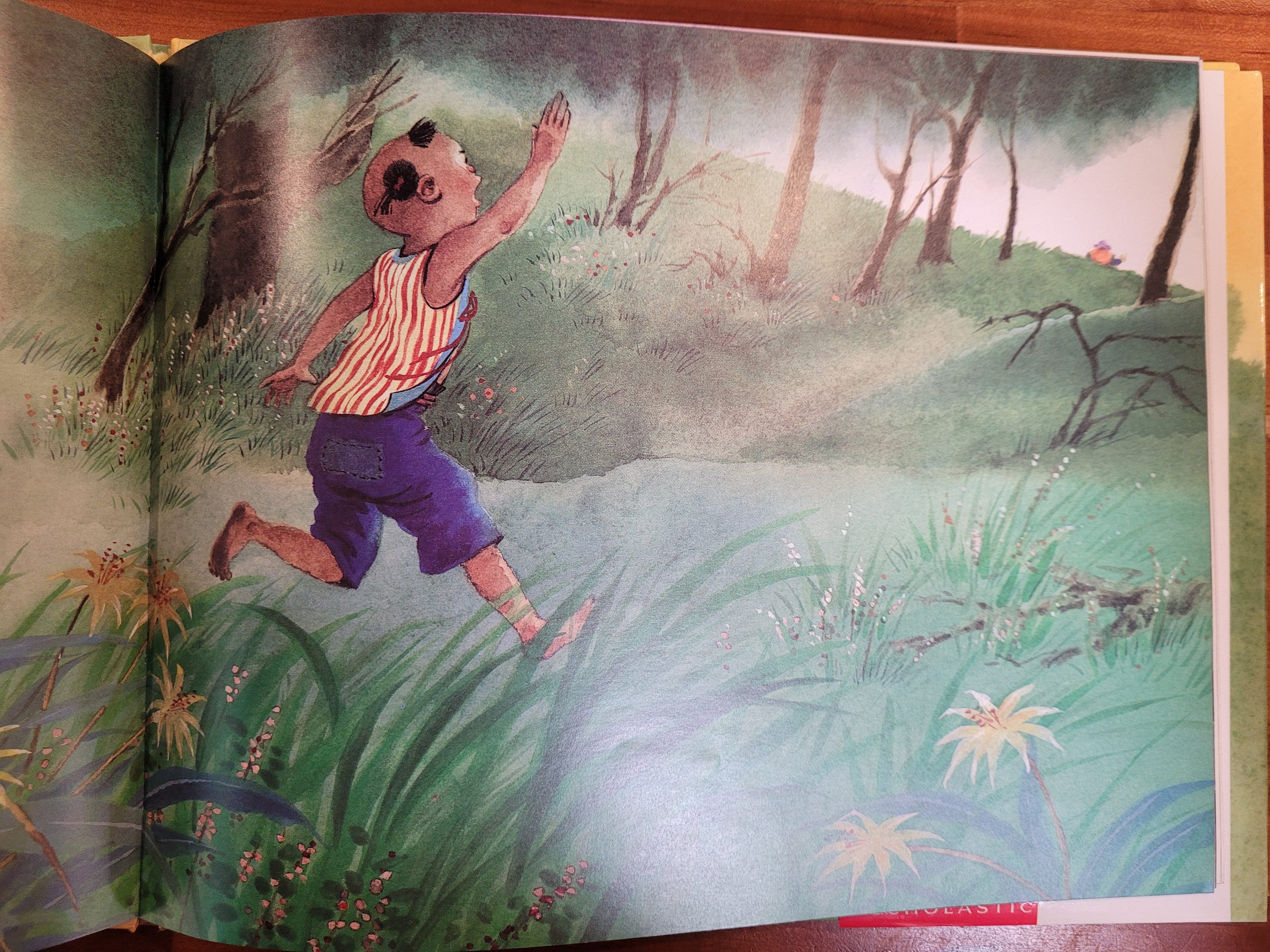 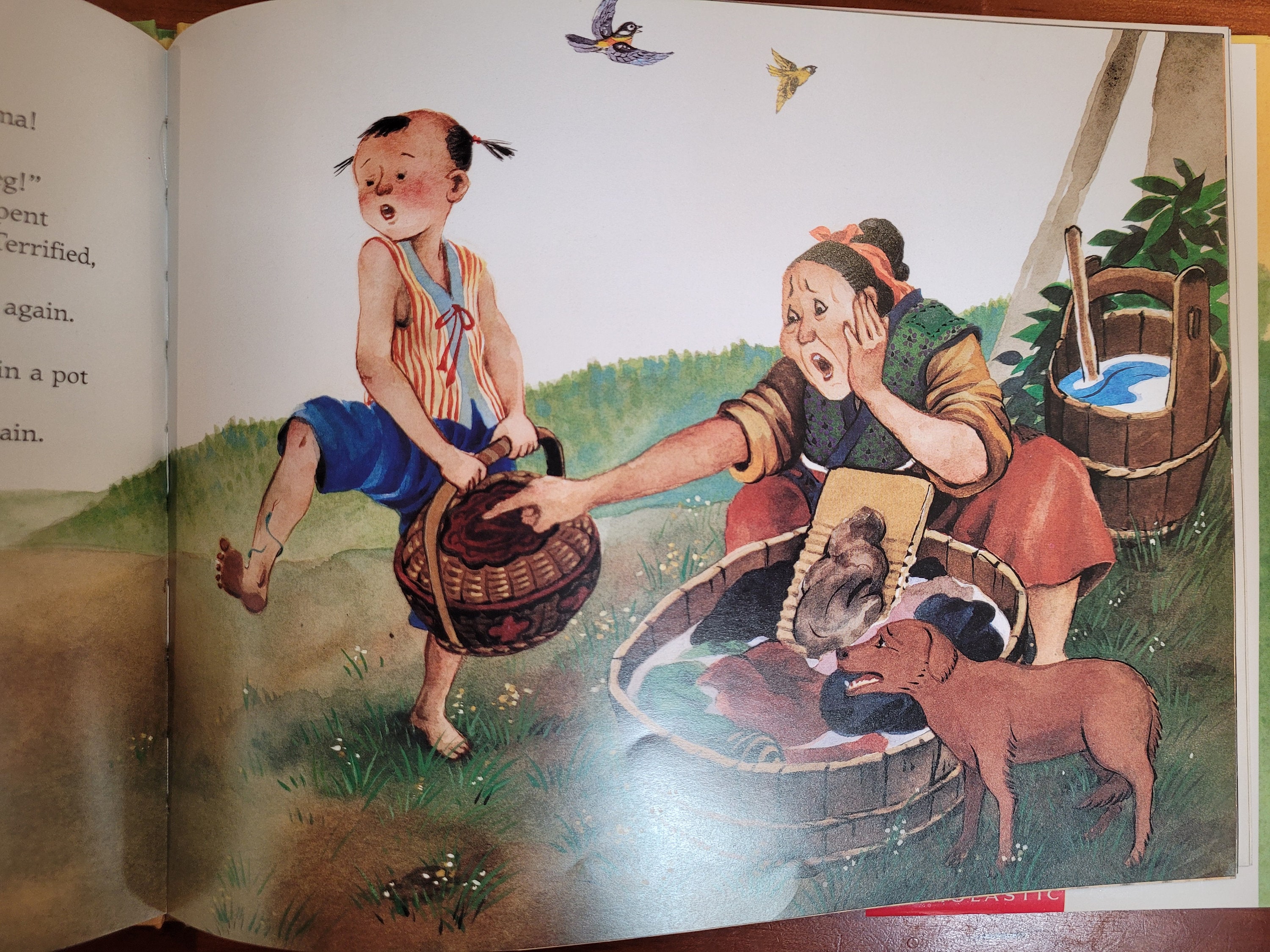 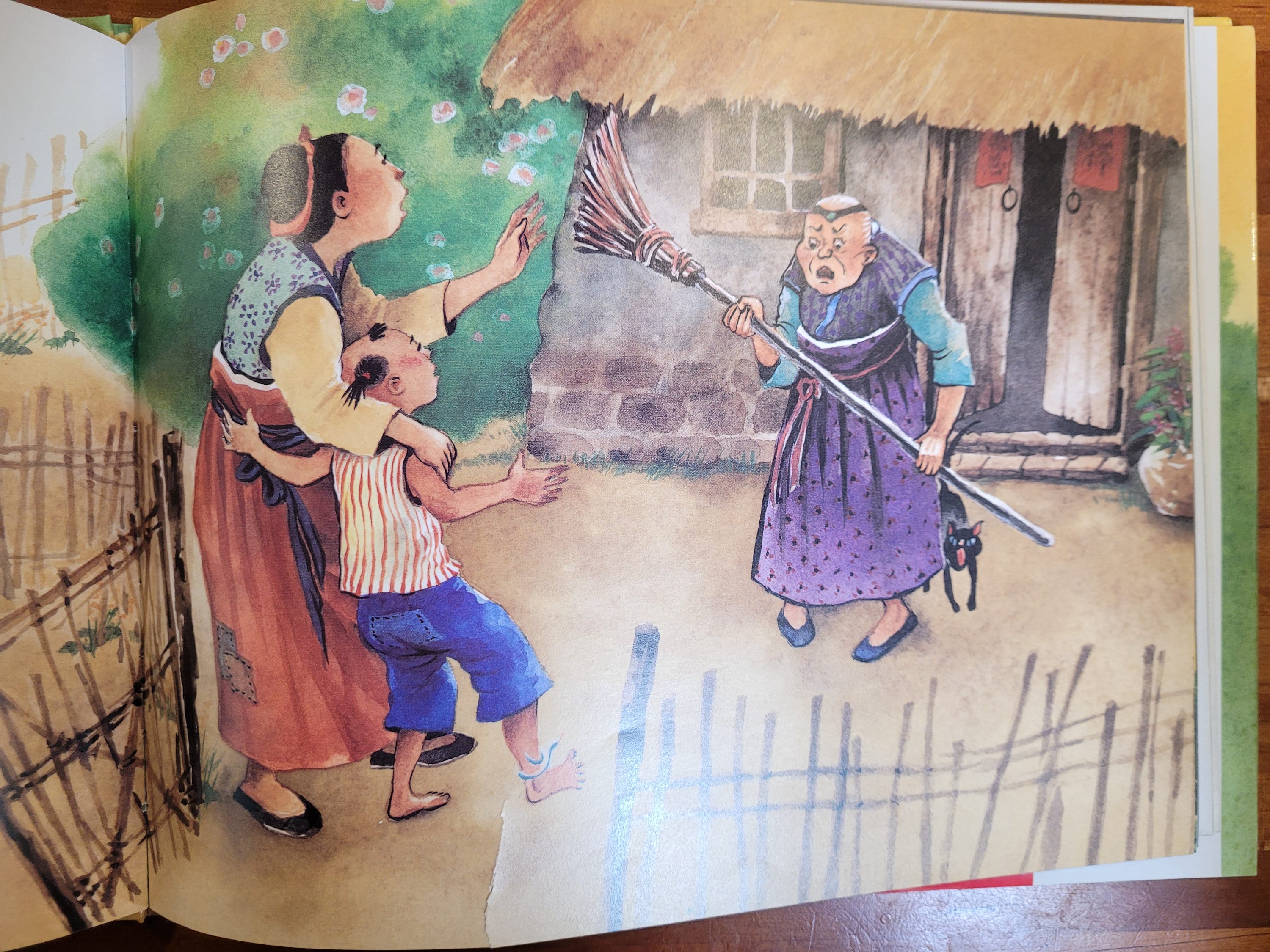 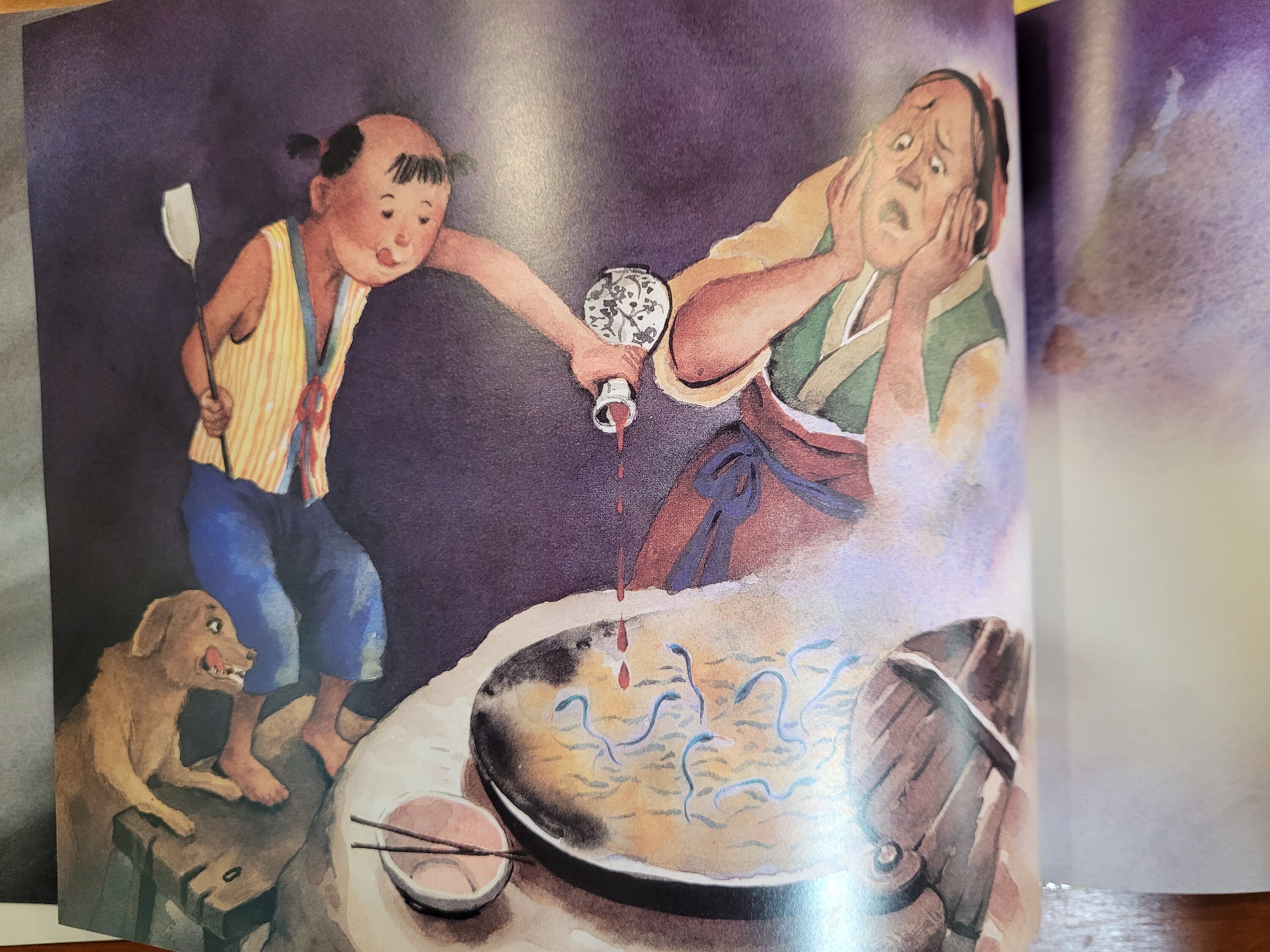 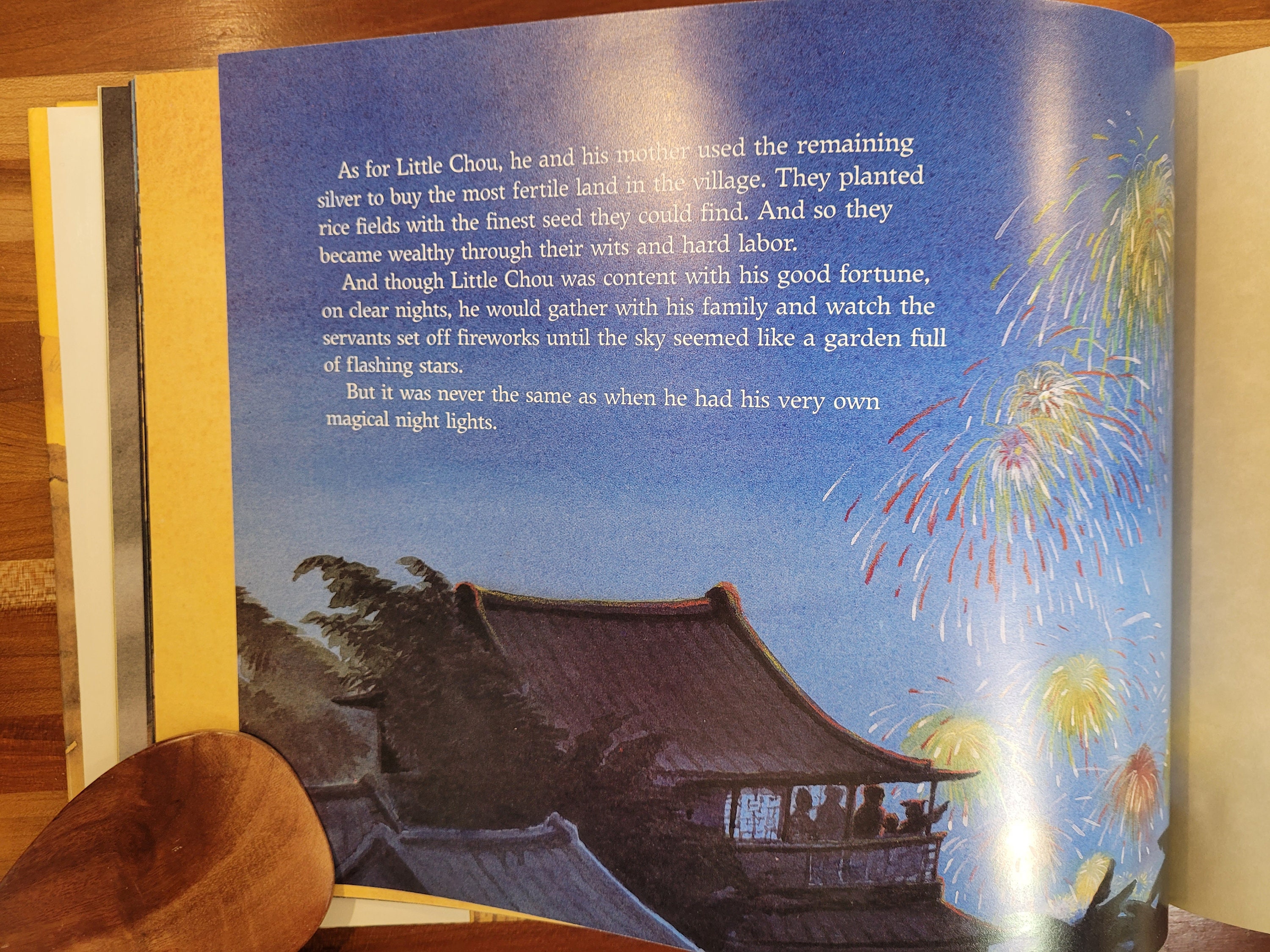 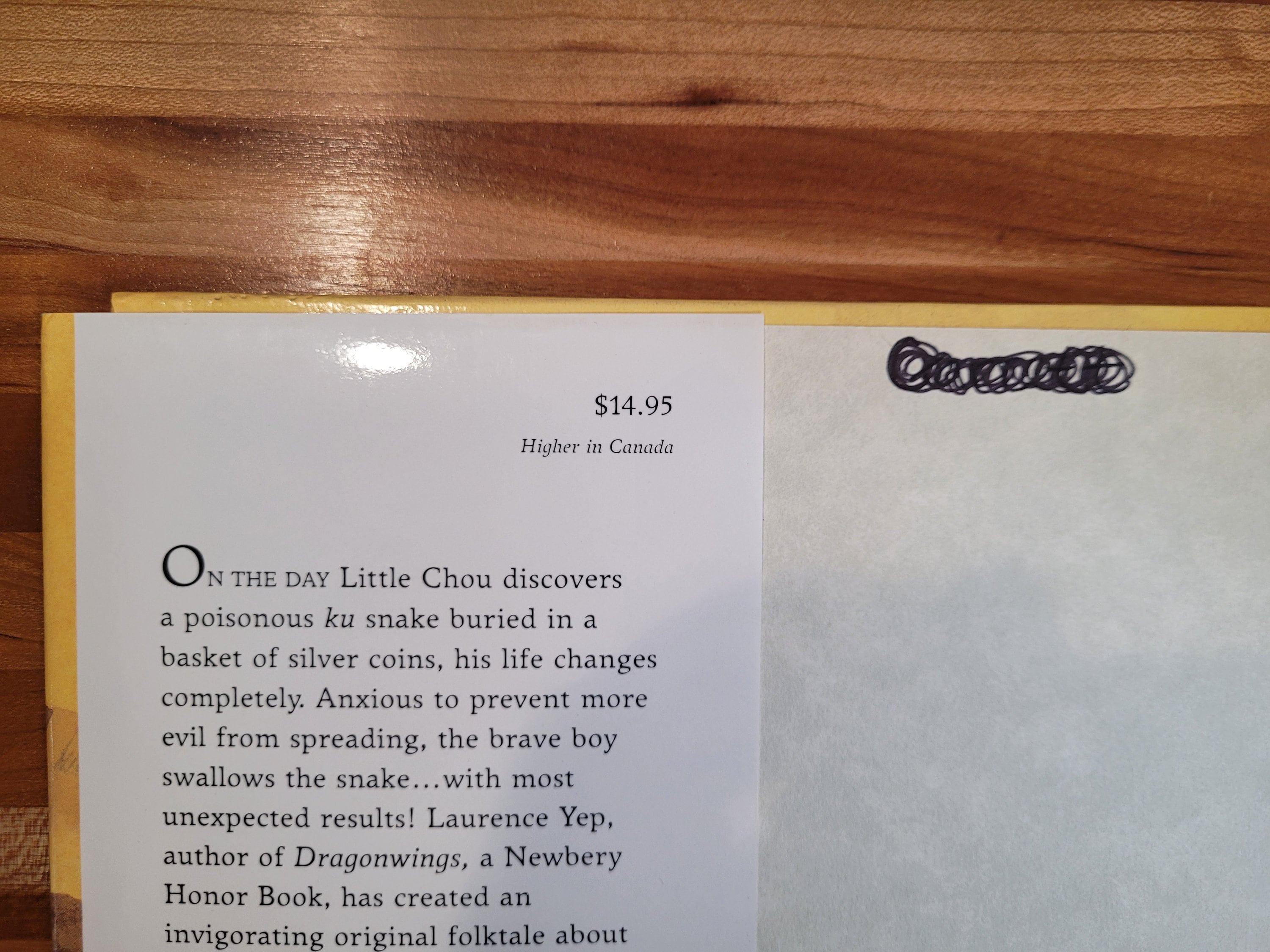 Wonderful! 1994 first edition of The Boy Who Swallowed Snakes by Laurence Yep and Jean and Mou-Sien Tseng.

"A long time ago, in southern China, forests still covered the hills. In their great, green shadow a small village huddled, and in that village lived a boy named Little Chou and his widowed mother. They were so poor that they had no land to farm."

"On the day Little Chou discovers a poisonous ku snake buried in a basket of silver coins, his life changes completely. Anxious to prevent more evil from spreading, the brave boy swallows the snake...with most unexpected results! ...

"Jean and Mou-sien Tseng's watercolor paintings take readers to the lush forests of southern China. The lucky charm on the title page is a symbol that was used to ward off evil and disease. The Chinese character for "long life" is surrounded by the five poisonous animals (clockwise): scorpion, snake, toad, centipede, and lizard."

Little Chou, brave and pure of heart, is rewarded, and entertained by not one, not two, but eventually thousands of snakes! Until rich Mr. Owyang hears about it and realizes that Little Chou found his basket of silver. All does not end well for greedy Mr. Owyang, but Little Chou and his mother prosper from their own hard work and good hearts.

Laurence Yep (1948 - ) is a native of Chinatown, San Francisco, and the award-winning author of many wonderful children's books, all of which are worth exploring. Yep authored the Golden Mountain Chronicles, the Dragon Series, the Chinatown Mysteries, City Trilogy, The Tiger's Apprentice, and the Ribbons books. Dragonwings and Dragon's Gate were Newbery Honor books; Child of the Owl, a Golden Mountain book, won the Boston Globe-Horn Book award; in 2005 he won the biennial Laura Ingalls Wilder Medal for contributions to children's literature.

Jean and Mou-Sien Tseng met at university in Taiwan and immigrated to the United States in 1974. Their beautiful work includes The Khan's Daughter, The City of Dragons, The Ghost Fox, and The Seven Chinese Brothers.