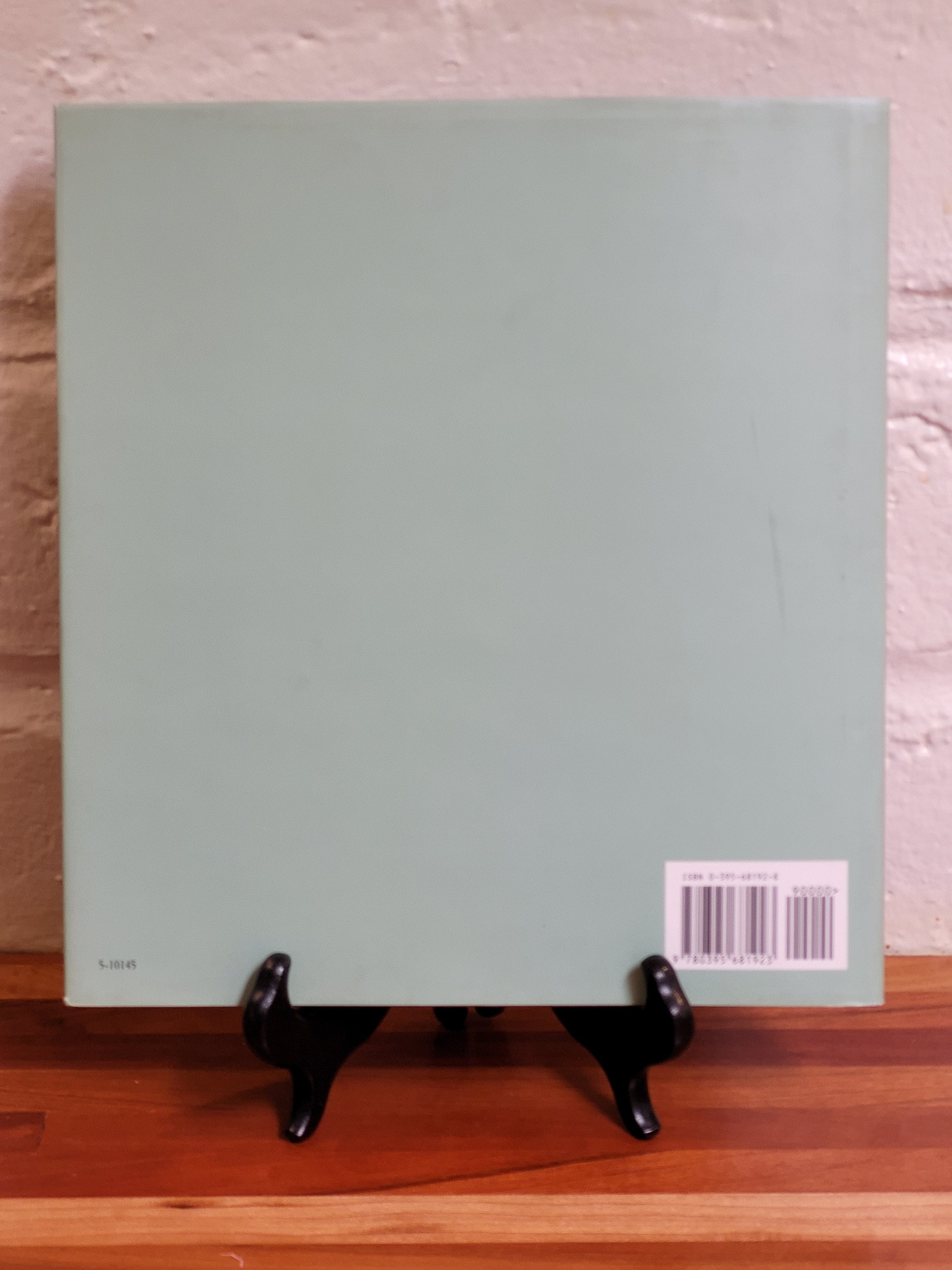 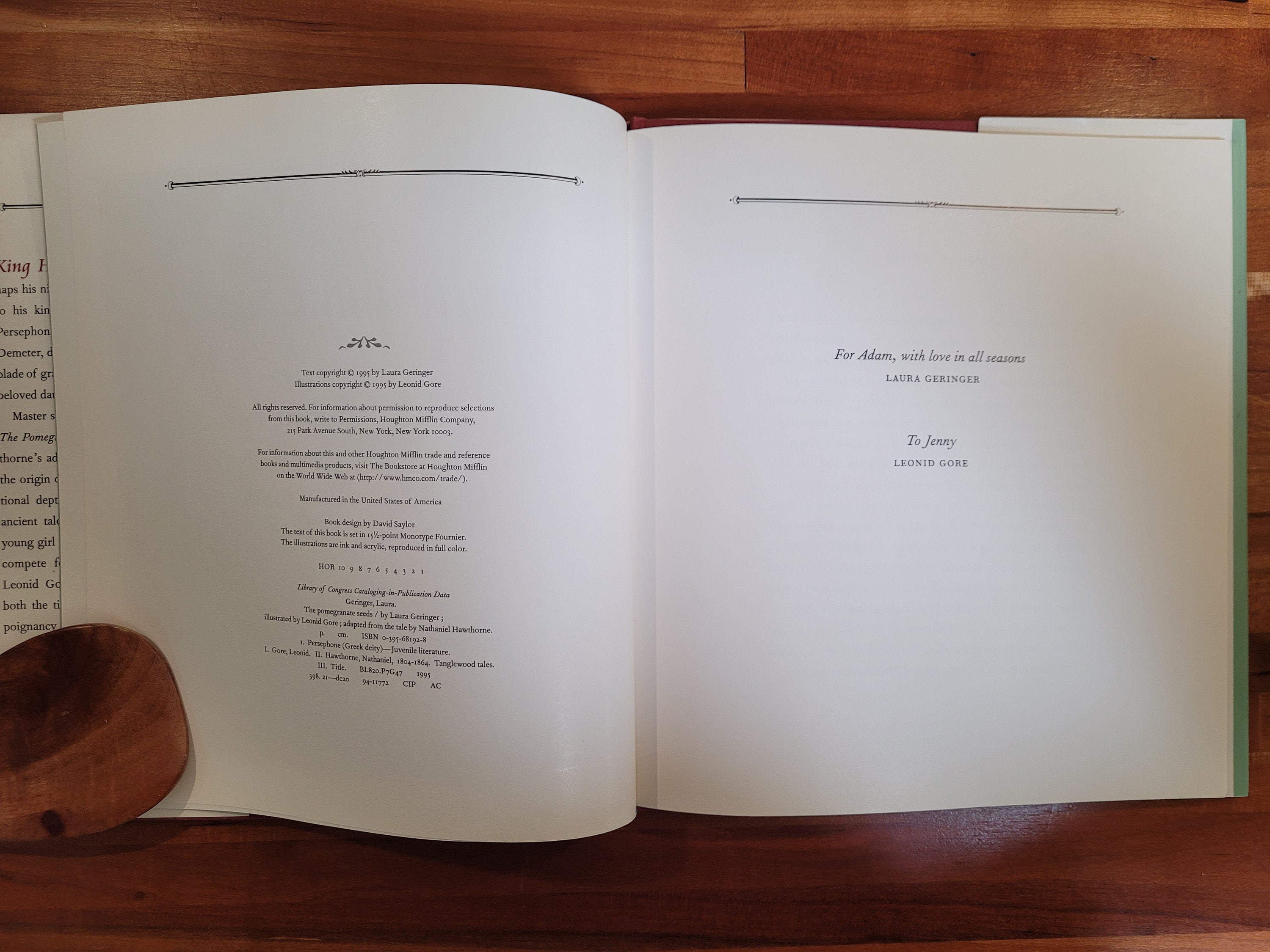 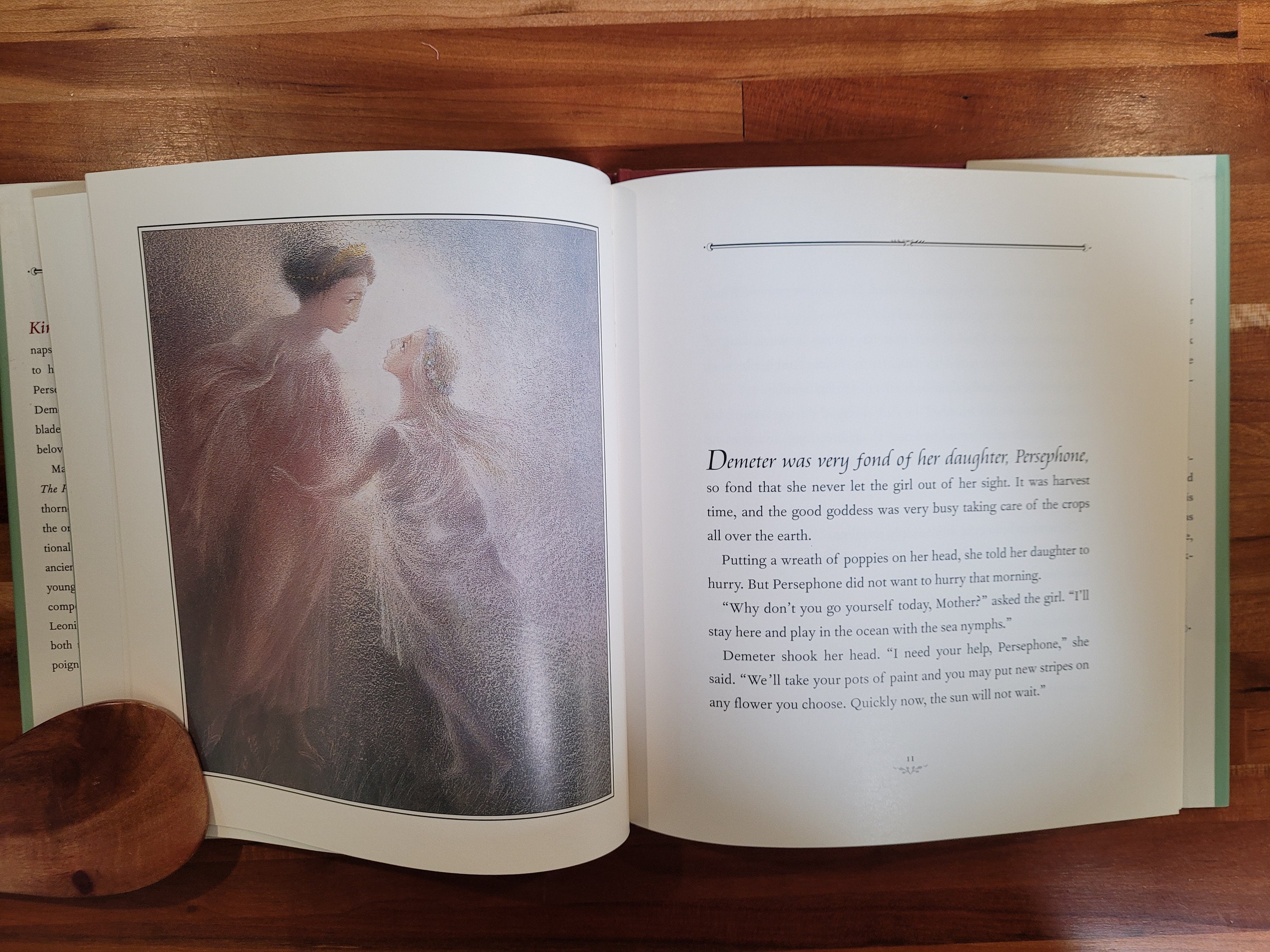 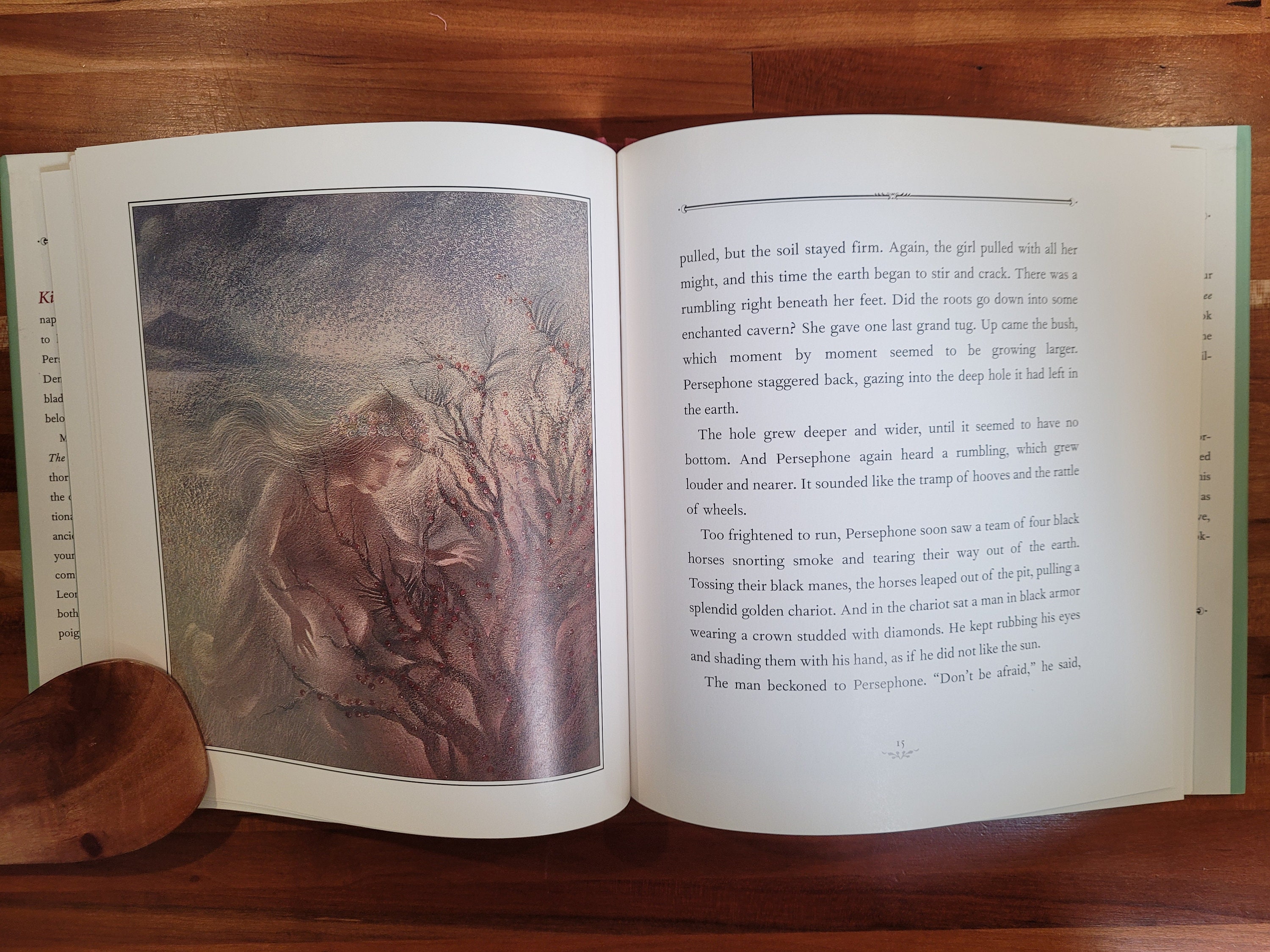 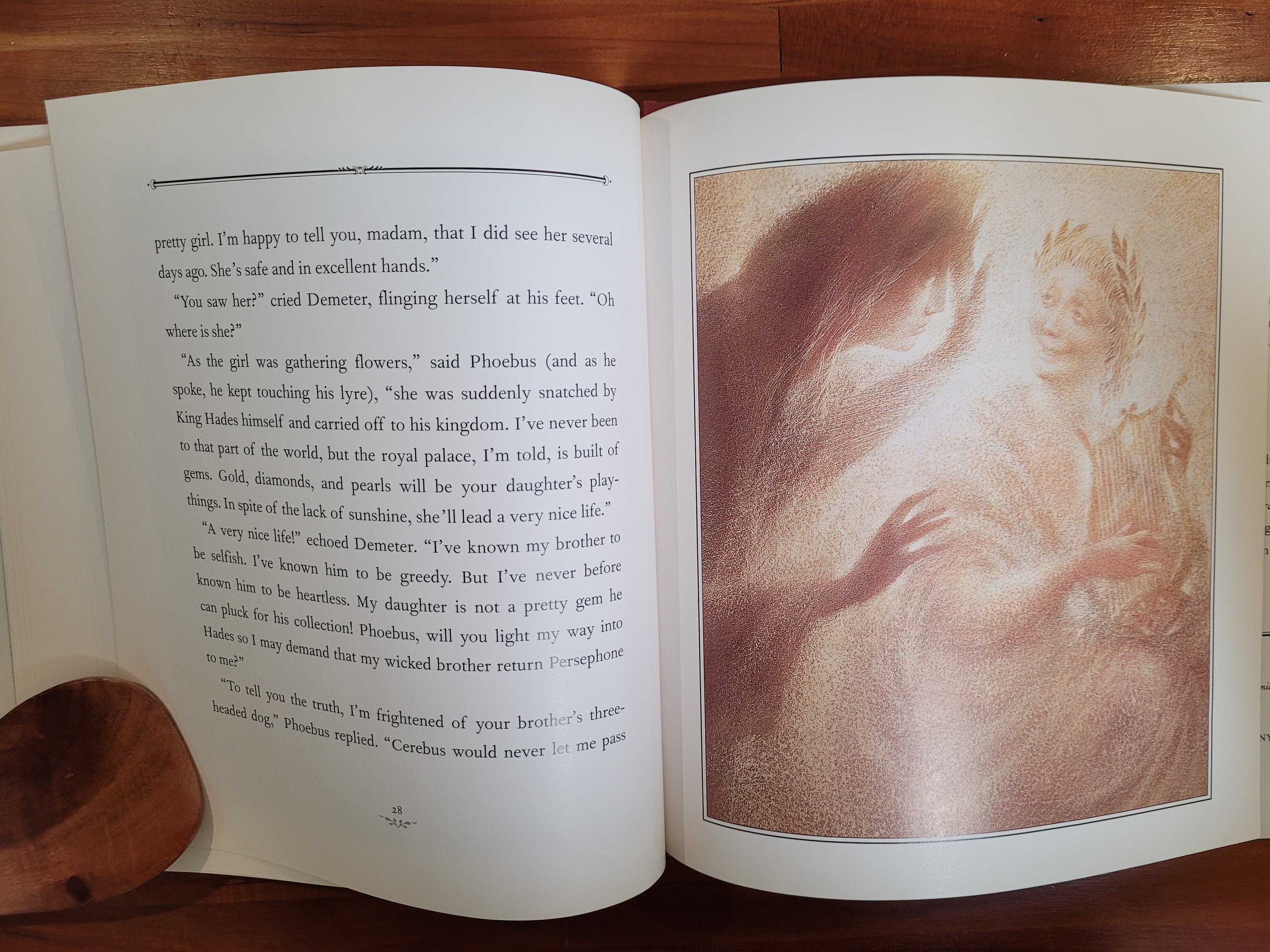 Gorgeous version of the Greek myth, The Pomegranate Seeds, by Laura Geringer and Leonid Gore.

"King Hades is so lonely that he kidnap his niece, Persephone, and brings her to his kingdom in the underworld. But Persephone's mother, the earth-goddess Demeter, decrees that nothing - not even a blade of grass - will grow on earth until her beloved daughter is returned to her."

Persephone protests her uncle's high-handedness by refusing to drink or eat the food of the underworld, which would erase her memories of life before and prevent returning to her mother. Even so, she grows fond of King Hades and feels sorry for his loneliness. She even has the King of the underworld playing hide-and-seek! Zeus, observing Demeter's grief and King Hades' selfishness from Mt. Olympus, sends Hermes to the underworld to bring Persephone home to her mother. Just before he arrives, she's tricked into eating three pomegranate seeds, and the immediate effect is to hesitate to leave. Hermes persists and returns her to Demeter, and Demeter restores the world. But for each pomegranate seed Persephone ate she will spend a month with her uncle. That three-month period when the world goes cold and barren becomes winter.

Laura Geringer, children's book writer and publisher, based her version of the Greek myth of the origin of the seasons on Nathaniel Hawthorne's short story. Geringer's books include A Three Hat Day, Sign of the Qin, Boom Boom, Go Away!, and Nicholas St. North and the Battle of the Nightmare King.

Leonid Gore, native of Belarus, has written and/or illustrated over thirty outstanding children's books, including Danny's First Snow, Behold the Trees, The Malachite Palace, Lucy Dove, Jacob and the Stranger, When I Grow Up, and The Sugar Child.