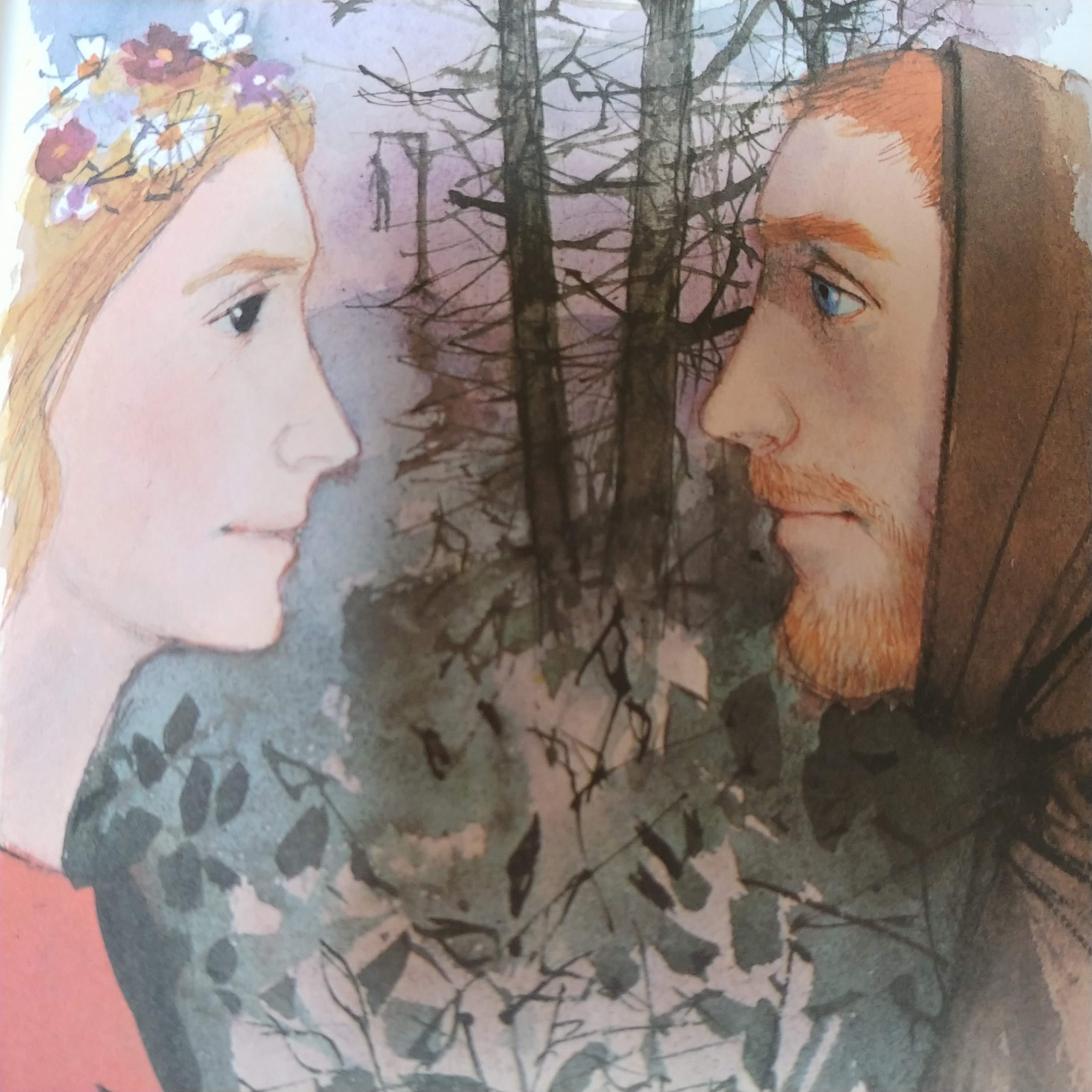 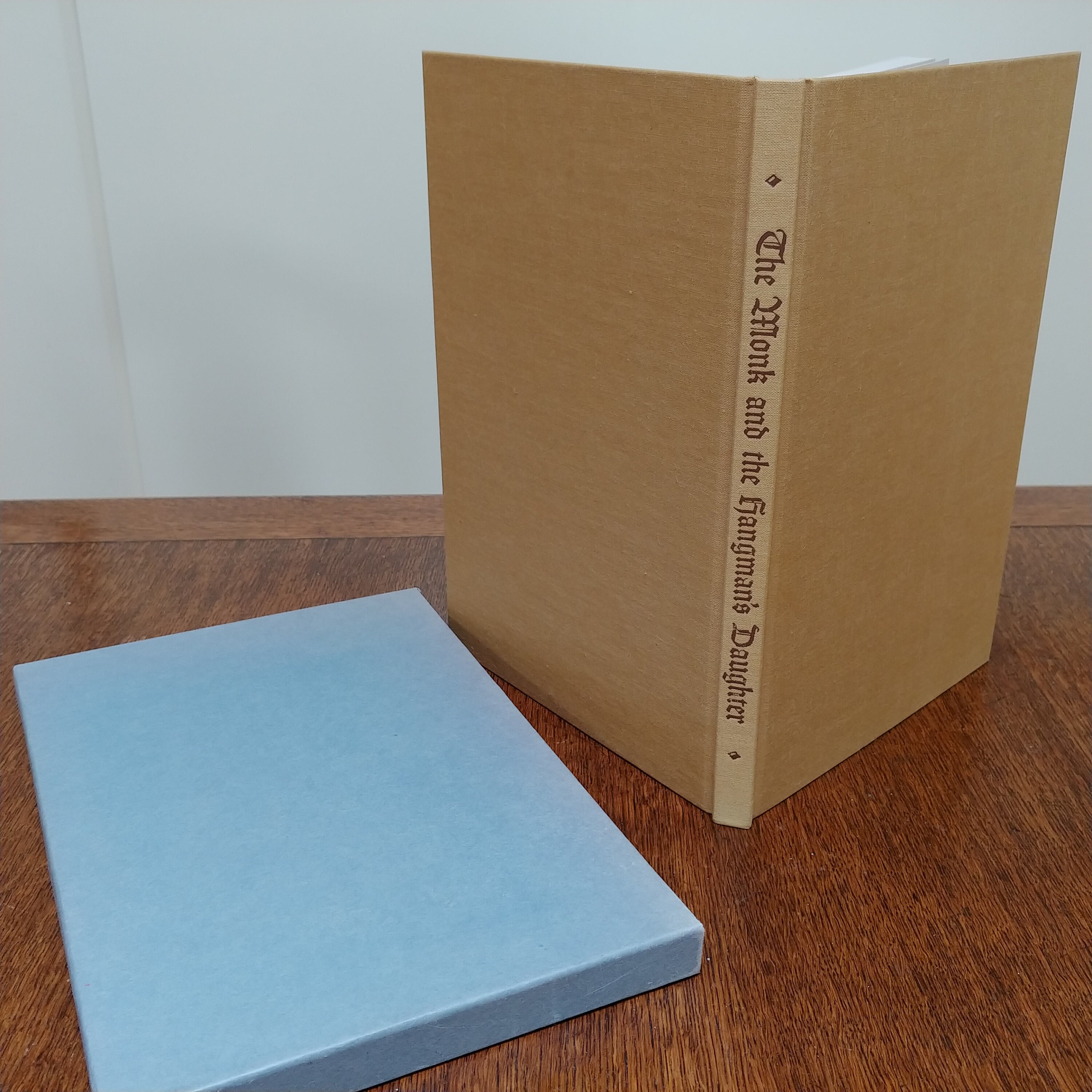 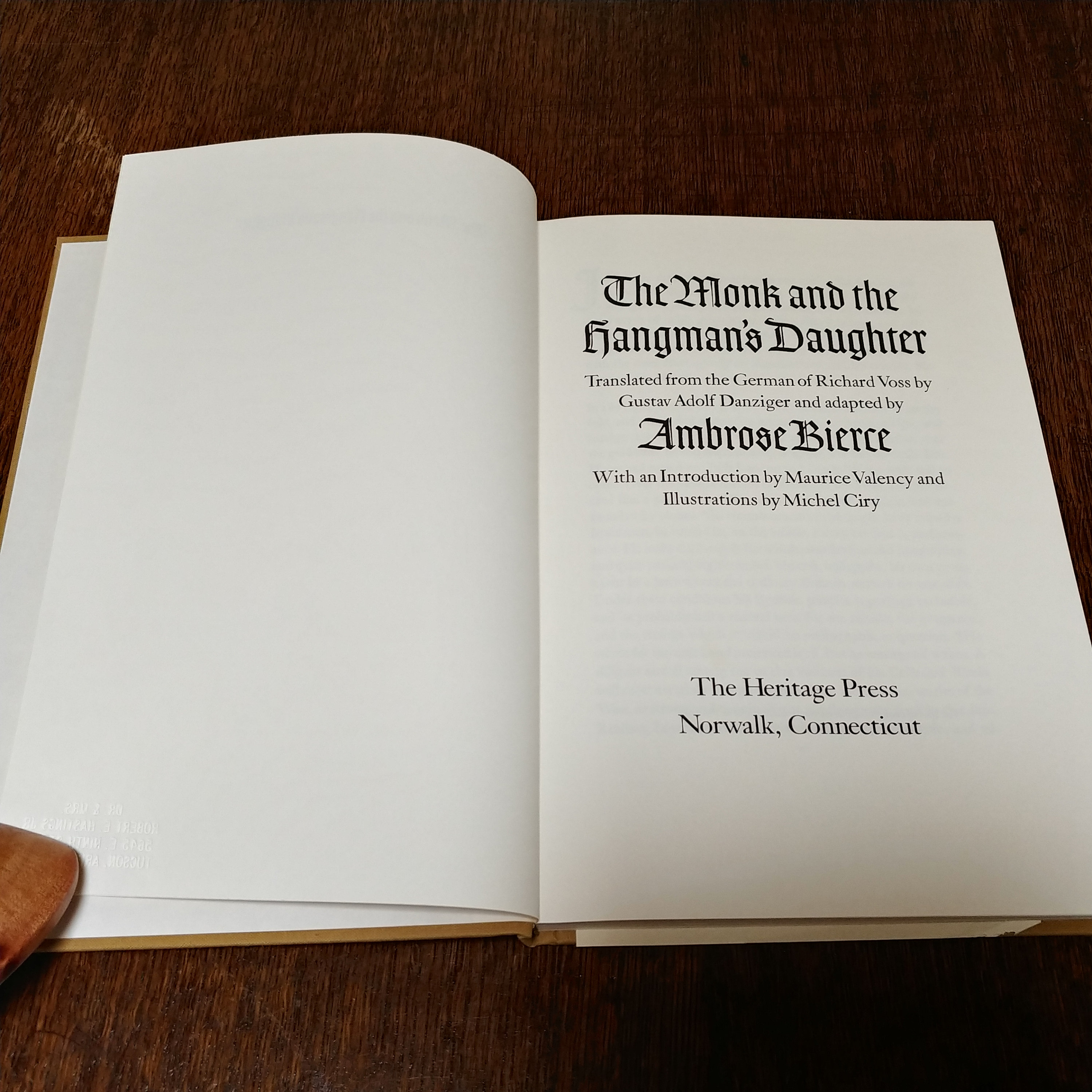 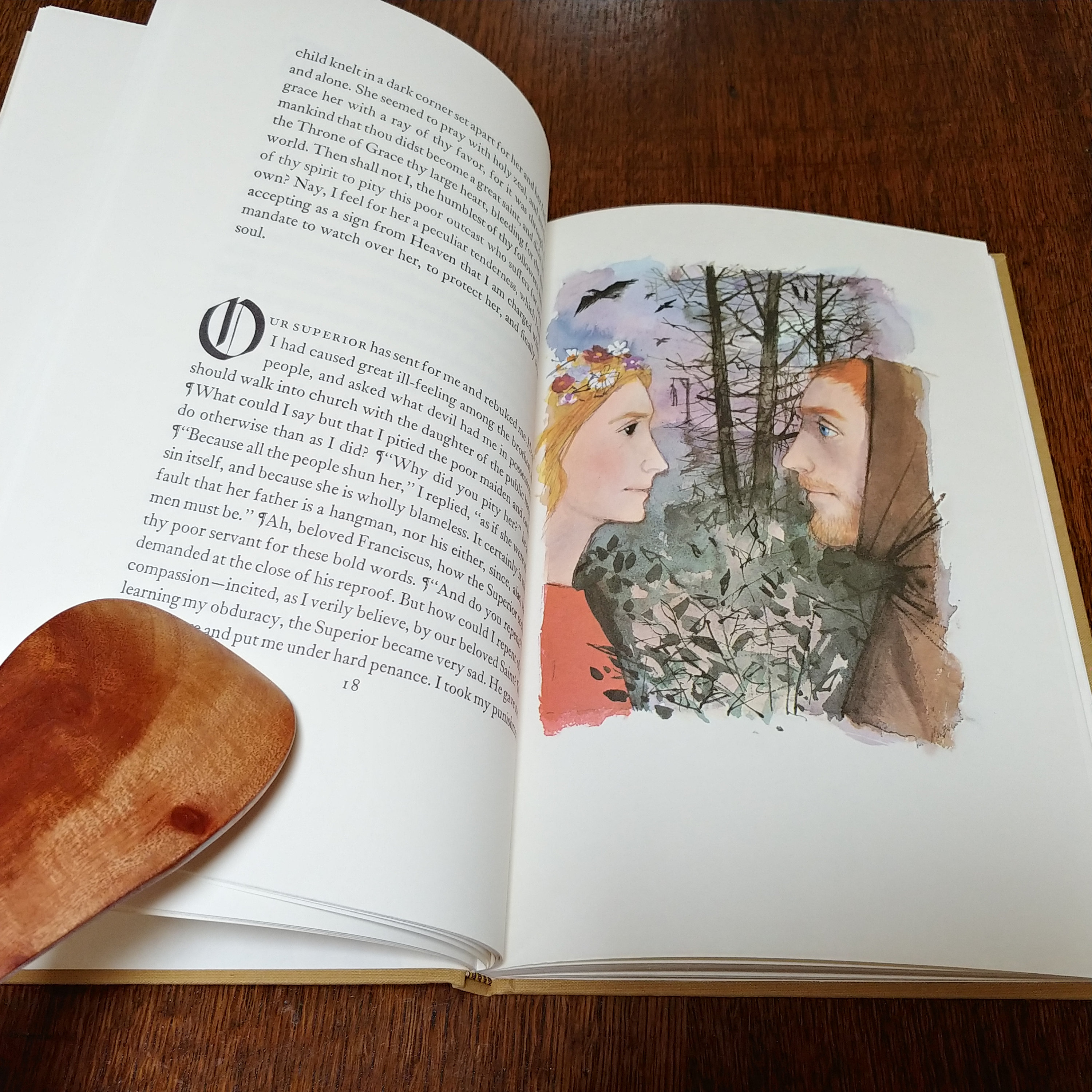 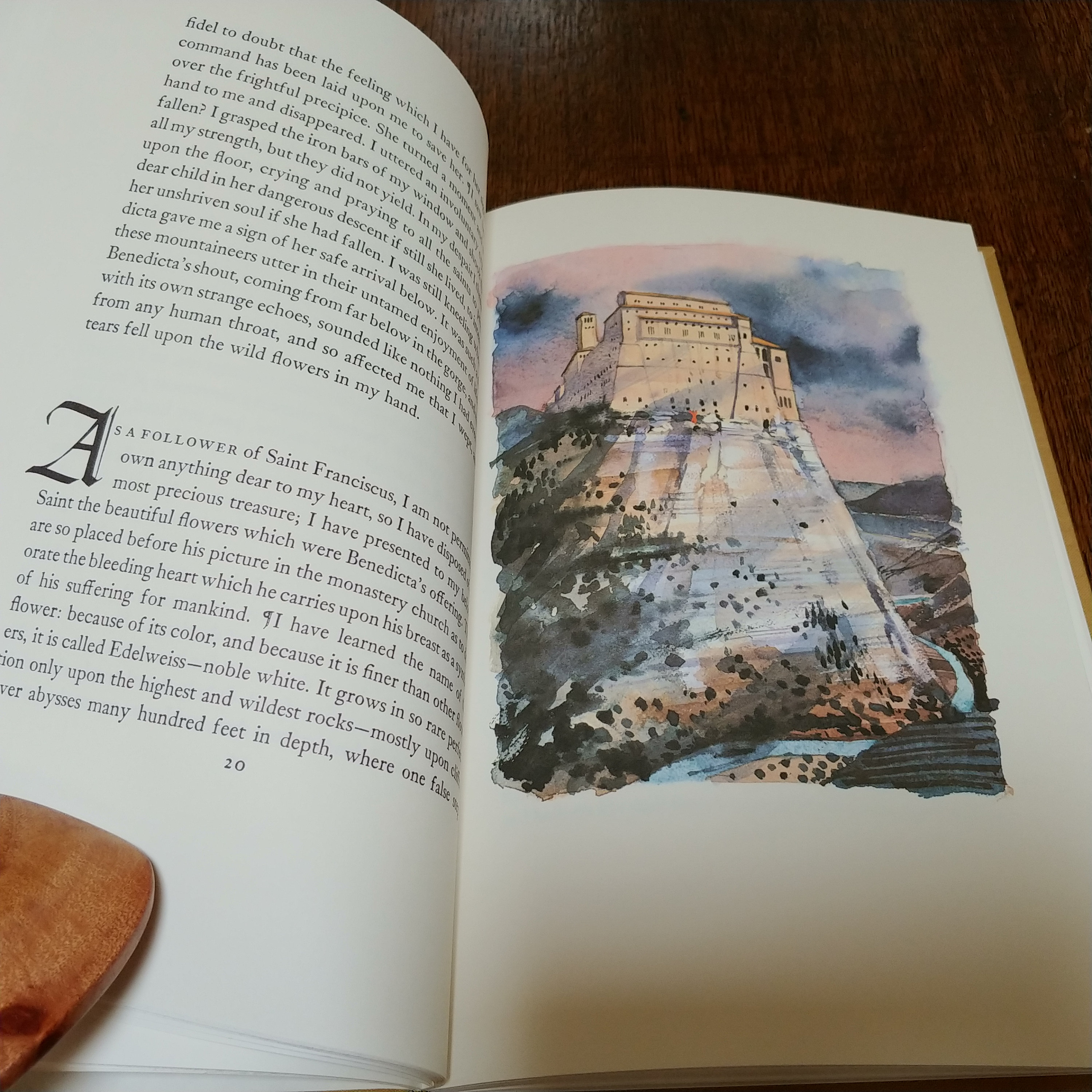 First edition thus of The Monk and the Hangman's Daughter published as a deluxe edition in 1967 by The Heritage Press.

The Heritage Press was founded in 1935 by the Limited Editions Club to make high quality yet affordable editions of literary classics available to more readers. It was sold in 1970 and is no longer in business. The Heritage Club newsletter, Sandglass, which explains a book's publication history, is enclosed with this book.

The Monk and the Hangman's Daughter is derived from a 19th C. story collected and written by Richard Voss, acquired and translated by Gustav Adolf Danziger, and given to Ambrose Bierce to edit, and in the end take credit for its authorship. Not that Bierce was a plagiarist. No one bothered to review the original German text until the 1930s, when it became clear that Danziger had barely touched the original author's work before giving it to Bierce to edit.

Brother Ambrosius is sent to the Monastery of Berchtesgaden, near Salzburg. Nearing the Monastery he sees a girl dancing in a meadow under a corpse hanging from the gallows. Fascinated, the monk learns that she's Benedicta, the hangman's daughter. He also learns that she's universally reviled and treated cruelly, solely based on what her father does. He is drawn to her regardless and tries to help her, and finds himself attracted to her, and is punished by his superiors. The story does not end well for either of them.

The more interesting aspect of the story is Ambrose Bierce. According to the Sandglass:

"Ambrose Bierce is one of the most eccentric and fascinating personalities in American literature. His morbid, satirical essays, short stories, and epigrams are characterized by brilliant wit, poignancy, and drama. His mysterious disappearance into Mexico in 1913 gave an aura of immortality to the Bierce legend that has added to his appeal."

The eight full-page illustrations were done by Michel Ciry (1919 - ), an acclaimed French painter.

Condition*: Near Fine/Very Good. The blue slipcase is slightly sunned on the leading edges. A front flyleaf is embossed in the lower right corner with previous owner's name else fine condition.